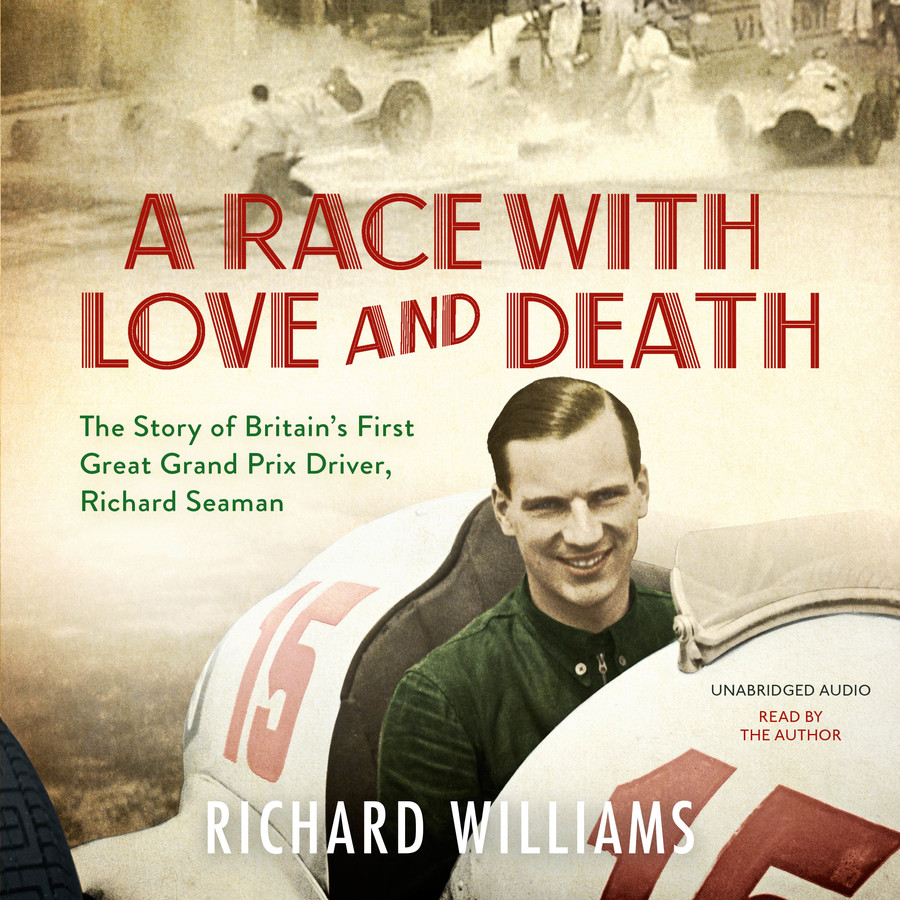 'A tragic age and a tragic character, both seemingly compelled to destroy themselves...a chilling reminder of how little control we have over our fates' Damon Hill
'One of the greatest motor racing stories' Nick Mason
'Timely, vivid and enthralling … it’s unputdownable’ Miranda Seymour, author of The Bugatti Queen

Dick Seaman was the archetypal dashing motorsport hero of the 1930s, the first Englishman to win a race for Mercedes-Benz and the last Grand Prix driver to die at the wheel before the outbreak of the Second World War.

Award-winning author Richard Williams reveals the remarkable but now forgotten story of a driver whose battles against the leading figures of motor racing's golden age inspired the post-war generation of British champions. The son of wealthy parents, educated at Rugby and Cambridge, Seaman grew up in a privileged world of house parties, jazz and fast cars. But motor racing was no mere hobby: it became such an obsession that he dropped out of university to pursue his ambitions, squeezing money out of his parents to buy better cars. When he was offered a contract with the world-beating, state-sponsored Mercedes team in 1937, he signed up despite the growing political tensions between Britain and Germany. A year later, he celebrated victory in the German Grand Prix with the beautiful 18-year-old daughter of the founder of BMW. Their wedding that summer would force a split with his family, a costly rift that had not been closed six months later when he crashed in the rain while leading at Spa, dying with his divided loyalties seemingly unresolved. He was just 26 years old.

A Race with Love and Death is a gripping tale of speed, romance and tragedy. Set in an era of rising tensions, where the urge to live each moment to the full never seemed more important, it is a richly evocative story that grips from first to last.

'Timely, vivid and enthralling in its close-up view of a world of heroes, Richard Williams’ splendid book corrects the many myths that cling to Dick Seaman’s name. Was he buried sitting upright in the car in which he died? Did his overbearing English mother light up the family’s ancestral home to guide Nazi pilots through the night? Williams has found a subject worthy of his rare combination of technical knowledge with compelling story-telling. It’s unputdownable.'

'One of the greatest motor racing stories, about one of the greatest but least celebrated British drivers from an era that produced perhaps the most awesome - certainly the most fearsome - racing cars of all time, the original Silver Arrows.'

'A fascinating story...as you'd expect from one of the finest sports writers of our lifetime, Williams advances our understanding of the subject by elegantly weaving a narrative that combines the Boy's Own derring-do of a between-the-wars hero with the suffocatingly stuffy expectations of British society...Gives you all the detail a purist would want from a racing biography, but it's also an easy-to-read yet fascinating social documentary of the era.

'A tragic age and a tragic character, both seemingly compelled to destroy themselves...a chilling reminder of how little control we have over our fates'

'To read A Race with Love and Death...is to smell the petrol that frequently caused conflagrations as cars burst into flame from leaks and collisions. Williams is the right man to tell [Seaman's story] - a fine sports writer.'

'Readers...will be familiar with the elegance of his prose and the breadth of his interests and expertise. All are on show here.'

‘Richard Williams has written wonderful books…but this latest one tops them all for drama, insight and casting fresh light on old events.’

‘The gifted sports writer – Richard Williams recounts Seaman’s story vividly and with aplomb, ably calculating the spirit of the age.’

‘The story of ‘Britain’s First Great Grand Prix Driver’ is expertly chronicled in A Race with Love and Death as journalist Richard Williams re-evaluates the speedster’s life and legacy.’

'Richard Williams’ charming account of Seaman’s life, will help...remind others of a time in Grand Prix racing when with grievous regularity...the fast died young and died often.'

'Richard Williams – one of our most elegant sportswriters – has written a biography of Seaman that seeks to remind us of his unfairly expunged sporting achievements...once Seaman’s career takes off and he participates in bigger, more fully documented events, Williams’s gift for bringing a race to life in all its excitement comes into its own. He is a wonderfully lucid writer, and a sort of anti-Murray Walker in that he never tries to artificially ramp up the tension.'

'Williams writes like a novelist, vividly creating scenes in order to swing the spotlight on a character who should perhaps have been remembered in the same way as Mike Hawthorn...It makes of a compelling read.'

'Williams provides the contextual sensitivity that takes a lifetime to acquire... [His] research is nothing short of incredible... A remarkable and moving account, one that places you in every room with Dick, told with reason – matter of factly, rather than chasing sensationalism.'

'Williams skilfully and gently lays out the nuances of a life that ended violently... As it is, this exhaustively researched and immaculately written book can only feed such fascinating but ultimately sad speculation.'