LYNN GOLDSMITH is a multi-awarded portrait photographer whose work has appeared on and between the covers of Life, Newsweek, Time, Rolling Stone, Sports Illustrated, People, Elle, Interview, Paris Match, etc. Her subjects have varied from entertainment personalities to sports stars, from film directors to authors, from the extra-ordinary to the ordinary man on the street. Her forty years of photography have not only been an investigation into the nature of the human spirit, but also into the natural wonders of our planet. Lynn has been a consistent contributor to the highly acclaimed series of "Day in the Life" of books as well as many other photography collections. Nine of her own photographic books have been published including: Bruce Springsteen, The Police, Circus Dreams, and most recently Rock and Roll. She is the youngest member ever to be inducted into the Director’s Guild of America and in 1971, she helmed Joshua Television, the first company to do video magnification for rock groups entertaining at large venues. In 1972, she was a director for the first rock show on network television; ABC’s “In Concert”. In 1973, Lynn directed “We’re An American Band”, the first music documentary to be released as a theatrical short. In the mid-seventies, Lynn stopped her directing to concentrate more fully on photography. Though a Magna Cum Laude graduate from the University of Michigan, with a B.A. in both English and Psychology, Lynn considers herself a self-taught artist and entrepreneur. She was the founder of LGI Photo Agency, an organization that represented the work of over two hundred worldwide photographers. Established in 1976, LGI was one of the first agencies to specialize in servicing celebrity portraiture for editorial usage. LGI was sold in 1997 so that Lynn could more fully concentrate on photography. Lynn’s work has exhibited at the Jenkins Johnson Gallery in San Francisco, the Contessa Gallery in Cleveland, Holden Lutz in Palm Beach, the David Floria Gallery in Aspen, and two installations of her work as her alter ego Will Powers at the Museum of Modern Art in New York City.

Get updates about Lynn Goldsmith and recommended reads from Simon & Schuster.
Plus, get a FREE eBOOK when you sign up! 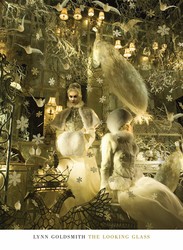