Sword of the Spirits

In a post-apocalyptic South of England, when the world has reverted to a medieval setting and everything is controlled by a priestly class of Seers who interpret the will of the Spirits, Luke is named successor to the Prince of Winchester in this trilogy that takes him to the far reaches of his known—and unknown—world as he learns the secrets of the Seers and is forced to reconcile what he believed with the truth behind his new position of power. 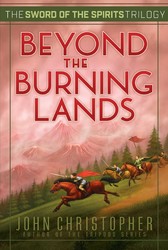 Beyond the Burning Lands
By John Christopher
Book #2
Luke encounters rage, treachery, and revenge in the second book in the post-apocalyptic Sword of the Spirits trilogy from the author of The Tripods series.

As the Prince in Waiting, Luke has been protected by the High Seers since his father’s murder and his half-brother’s ascension...