Star Trek: Enterprise (ENT) focuses on the twenty-second century adventures of Captain Jonathan Archer aboard the Enterprise NX-01 during the early days of interstellar travel. The NX designation indicates that this Enterprise is an experimental prototype; Archer's ship is Earth's first vessel designed for long-range exploration of the galaxy. Prior to the development of warp engines that could reach a velocity of warp 5, missions of this nature were impossible. At warp 2, only a handful of inhabited planets were within a year's travel from Earth. But at warp 5, that number increases to ten thousand planets! It is Archer's job to visit as many of those worlds as he can. At 190 meters long, the NX-01 is a bit smaller than Kirk's Enterprise, and carries a crew complement of just eighty-three men and women, all human, with the exception of the Vulcan science officer and the Denobulan doctor.Unlike the starships of the four other Star Trek series, this Enterprise doesn't have deflector shields or phasers, but it does come equipped with a phase cannon and a rudimentary transporter that functions efficiently most of the time. 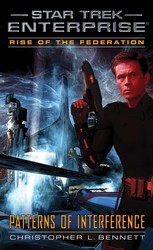 Rise of the Federation: Patterns of Interference
By Christopher L. Bennett
The saga of the Star Trek: Enterprise TV series continues with this thrilling original novel!

The time has come to act. Following the destructive consequences of the Ware crisis, Admiral Jonathan Archer and Section 31 agent Trip Tucker both attempt to change their...

By clicking 'Sign me up' I agree to the Terms of Use and acknowledge the Privacy Policy and Notice of Financial Incentive. Free ebook offer available to NEW US subscribers only. Offer redeemable at Simon & Schuster's ebook fulfillment partner. Must redeem within 90 days. See full terms and conditions and this month's choices.
Thank you for signing up, fellow book lover!