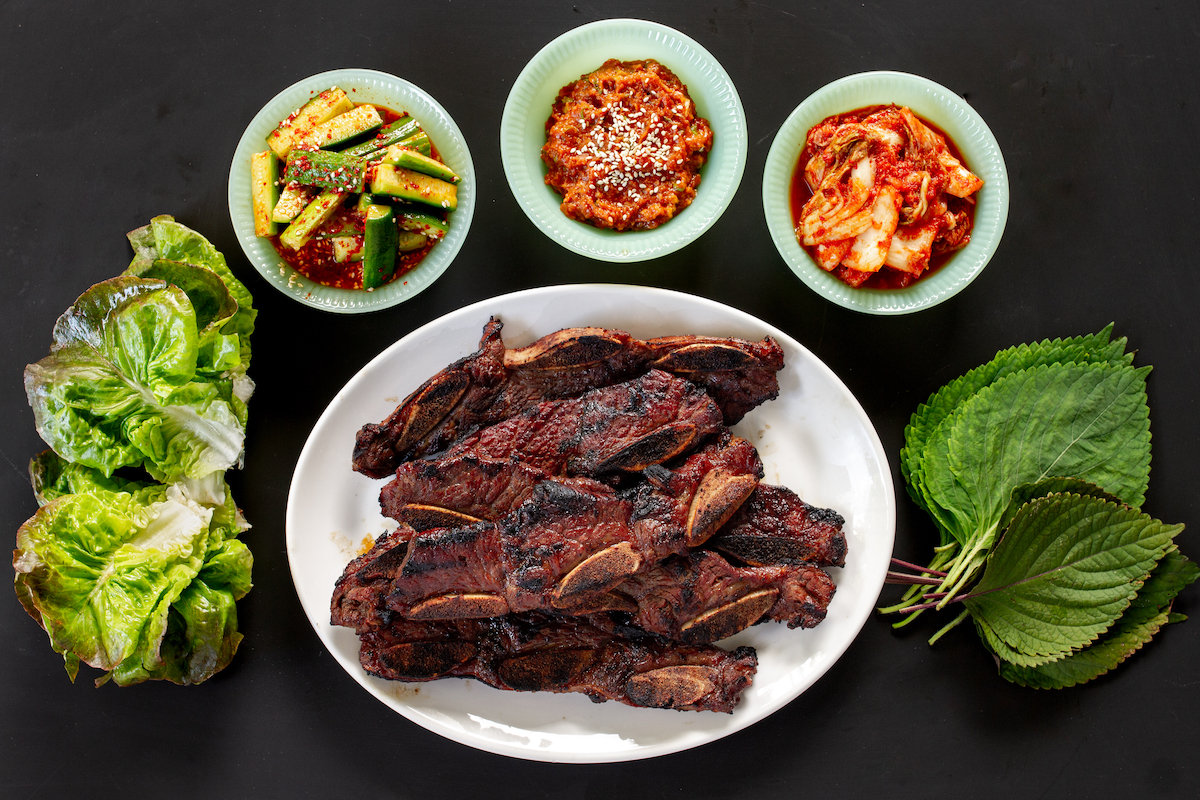 Unlike the fall-off-the-bone braised short ribs most of us are familiar with, Korean-style short ribs are cut crosswise through the rib bones into thin strips, and are then marinated and grilled until nicely charred. Serve with rice and lettuce or shiso leaves and tuck pieces of meat and clumps of rice inside the leaves to make ssam. If you cannot find crosscut short ribs that are sliced thin enough (look for them at Korean or pan-Asian supermarkets), you may slice 2 pounds beef brisket across the grain into 1/4-inch-thick slabs (to make slicing easier, first freeze the brisket for 30 minutes).

Sprinkle the ribs with:

Rub the sugar all over the ribs and refrigerate for 1 hour. Meanwhile, whisk together in a medium bowl:

2 large garlic cloves, minced or grated on a rasp grater

Place the short ribs in the marinade. Cover and refrigerate at least 1 hour and up to 2 days, turning the short ribs occasionally so that they marinate evenly.

Remove the ribs from the marinade and shake off any excess (do not rinse the ribs). Grill over the cooler part of the grill, turning once or twice, until well browned on both sides, about 8 minutes. Transfer to the hot side and let cook, covered, for 5 minutes more. Serve immediately with:

This salty sauce is usually served with ssam (green leafy vegetables, such as lettuce and shiso, wrapped around a filling, often meat). If you prefer a sweeter ssamjang, add honey to taste. The yield of this recipe is small, but remember: A little goes a long way (you can also thin it out with a little water or additional vinegar).

Stir together in a medium bowl:

2 garlic cloves, minced or grated on a rasp grater

Taste and adjust the seasonings if needed. Sprinkle on top:

Now, a word about two special ingredients called for in the accompanying sauce

Gochujang is a smooth, dense, and sticky chile paste used extensively in Korean cooking. It is made by leaving a mixture of ground dried chiles, glutinous rice, fermented soybeans, barley malt, and sugar syrup to ferment in a crock. The result is spicy and sweet, with a wonderful, lingering finish. There is no real substitute for its rich flavor; fortunately, it is becoming widely available in grocery stores (and, of course, can be reliably sourced from Korean and pan-Asian markets).

In some ways, Korean doenjang is similar to miso: Both are fermented soybean pastes used to flavor broths, soups, and other dishes. Unlike miso, which is primarily fermented in crocks or large tanks, the soybeans used to make doenjang are cooked, coarsely mashed, fermented for a time, and then pressed and formed into blocks (meju), which are then left to ferment in a breezy area for over a month. Traditionally, the blocks are then transferred to crocks and submerged in a brine. After a sufficient amount of time has passed, the softened blocks are removed from the brine and packaged into tubs.

This process yields two core Korean pantry items: The doenjang itself, and the brine, which has taken on the flavors of the meju and any additional seasonings. This brine is then turned into gukganjang, or traditional Korean “soup” soy sauce (so named because it is primarily used to flavor soups). Modern doenjang processing methods use a koji starter and often skip the lengthy brining step, which results in a sweeter flavored doenjang than traditional versions. Doenjang is usually chunkier in texture than miso and tends to be stronger than all but the darker varieties. If you cannot find doenjang, feel free to substitute red miso or the darker hatcho miso. 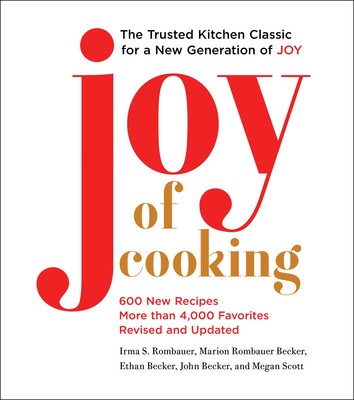 A New Generation of JOY

In the nearly ninety years since Irma Rombauer self-published the first Joy of Cooking, it has become the kitchen bible, with more than 20 million copies in print. This new edition of Joy has been thoroughly revised and expanded by Irma’s great-grandson John Becker and his wife, Megan Scott. They developed more than six hundred new recipes for this edition, tested and tweaked thousands of classic recipes, and updated every section of every chapter to reflect the latest ingredients and techniques available to today’s home cooks. Their strategy for revising this edition was the same one Irma and Marion employed: Vet, research, and improve Joy’s coverage of legacy recipes while introducing new dishes, modern cooking techniques, and comprehensive information on ingredients now available at farmers’ markets and grocery stores. Joy is and has been the essential and trusted guide for home cooks for almost a century. This new edition continues that legacy.