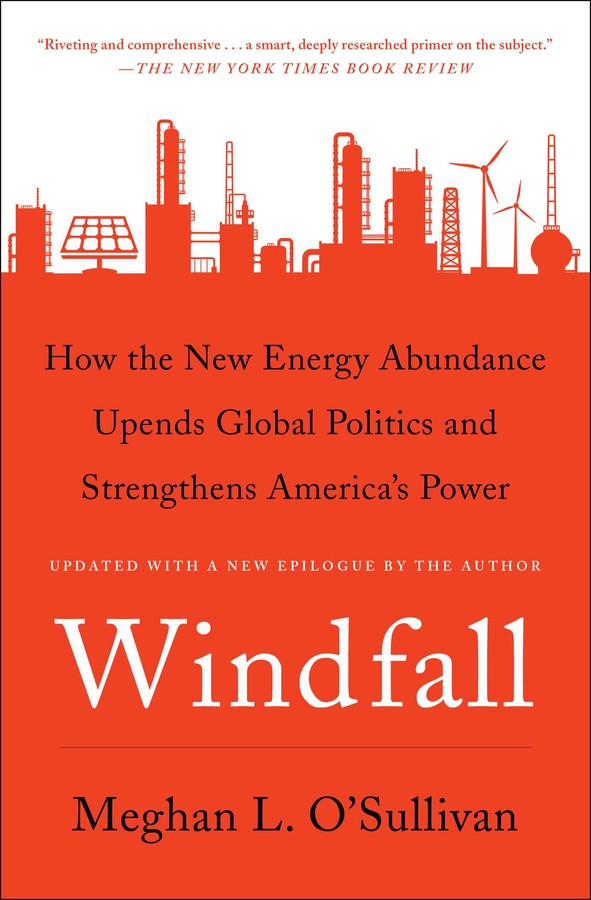 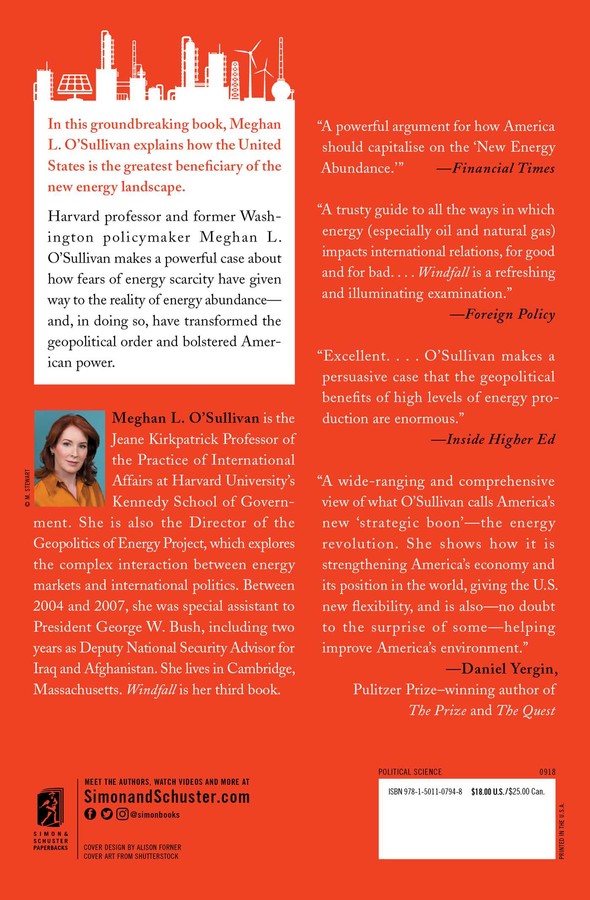 Windfall is the boldest profile of the world’s energy resources since Daniel Yergin’s The Quest, asserting that the new energy abundance—due to oil and gas resources once deemed too expensive—is transforming the geo-political order and is boosting American power.

As a new administration focuses on driving American energy production, O’Sullivan’s “refreshing and illuminating” (Foreign Policy) Windfall describes how new energy realities have profoundly affected the world of international relations and security. New technologies led to oversupplied oil markets and an emerging natural gas glut. This did more than drive down prices—it changed the structure of markets and altered the way many countries wield power and influence.

The advantages of this new abundance are greater than its downside for the US: it strengthens American hard and soft power. This is “a powerful argument for how America should capitalise on the ‘New Energy Abundance’” (The Financial Times) and an explanation of how new energy realities create a strategic environment to America’s advantage.

Windfall Preface
On January 17, 2017, the leader of one of the world’s largest economies took the stage at a gathering of global elites in Davos, Switzerland. He made a forceful and compelling case in favor of globalization and free trade, evoking Abraham Lincoln’s Gettysburg Address in the process. “Say no to protectionism,” the speaker implored. “It is like locking yourself in a dark room. Wind and rain are kept out, but so are light and air.” What was unusual was not the message—particularly at this meeting of 1,250 global leaders and CEOs—but the messenger.

The speaker was Xi Jinping, the first Chinese president to ever address this annual assembly of the World Economic Forum. Although China’s embrace of free trade was far from complete, Xi was clearly maneuvering to position China as the new vanguard of globalization. To further confuse those surprised by China becoming the global advocate for free trade, only three days later, a newly sworn-in President Donald Trump stood in light rain on the steps of the Capitol in Washington, D.C., and delivered a fiery inaugural address extolling the virtues of guarding borders and promising the American people that “protection will lead to great prosperity and strength.”

This pairing of speeches, in which the American and Chinese presidents seemed to have swapped texts, roles, and global orientations, is only one of the indications that the world in 2017 is in tumult and in the throes of historical change. A growing tide of populism, the rise of once-marginal powers, and real questions about continued American global leadership are shaping the geopolitical landscape. To make sense of the changes, we would normally look to historical, cultural, economic, or political trends. Such matters will continue to provide insights into foreign affairs. But new variables—such as technological and social change—need more of our attention, as do old drivers that have been consistently underappreciated. In a quest to better understand the world unfolding around us, understanding energy is critical.

Often overlooked as a determinant of global politics, energy has long been a driver of international affairs. The shift from wood to coal allowed for the making of steel, helping usher in the Industrial Revolution in Britain and elsewhere in the late-eighteenth and early-nineteenth centuries. By the mid-1900s, however, oil had overtaken coal, bringing with it a surge of game-changing innovations, including the internal combustion engine and the tank, which ended the stalemate of trench warfare in favor of Britain in World War I.

As discussed so vividly in Daniel Yergin’s Pulitzer Prize–winning book, The Prize, for much of the twentieth century, the economics of oil and gas in particular have permeated geopolitics and vice versa. The history of grand strategy during that era was often the history of efforts to gain or deny access to energy. For instance, many pivotal moments in World War II—from Hitler’s drive to the Caucasus to Japan’s quest for Borneo to the failed drive of Germany’s Afrika Korps across North Africa—were shaped decisively by oil. Decades later, perceptions that the Soviet invasion of Afghanistan could be the first step in a push to control energy resources in the Gulf informed U.S. and Saudi efforts to support the Afghan mujahideen.

More recently, oil and gas have funded the rise of separatist groups in Nigeria and played a critical role in the surprising rapprochement between Turkey and the Kurds of Iraqi Kurdistan.The need for reliable energy supplies has also underpinned unlikely partnerships, such as those between Washington and Riyadh or between Europe and Russia. And for the bulk of the last thirty years, nervousness over energy scarcity was one of the most important animators of Chinese foreign policy.

Today, the impact of energy on international affairs is as pronounced as ever. Yet energy’s bearing on geopolitics has arguably never been less understood. Why is this the case? One possibility is the rate of change. In the last decade alone, developments in the world of energy have unfolded at breakneck speed. Technology has brought large quantities of oil and gas once thought too expensive to produce to global markets. The declining costs of some renewable energies are making them competitive in some locations without government support. Digitization is introducing the possibility of once-unimagined efficiencies. And concerns over environment and climate change are spurring new forms of global action. All of these changes, moreover, are part of dynamic systems, which will continue to evolve, injecting new incentives and obstacles into the political domain as they do.

Another reason why energy has not figured more prominently in the analysis and making of foreign policy may be explained in the work of Robert Jervis, a professor now at Columbia University who has applied psychology to policy and decision-making. Jervis writes of the tendency of all people, when seeking to explain complex phenomena, to unconsciously discount the importance of factors they do not understand. The workings of energy markets are often complicated and technical, possibly leading many to gloss over their critical role in shaping international affairs and to focus instead on more intuitive explanations such as politics and history.

This book intends to remove that obstacle for nonexpert readers seeking to appreciate one of the most longstanding and consequential drivers of global politics: energy. It demystifies energy markets and powerfully and tangibly relates them to the most basic and fundamental drivers of foreign affairs. It demonstrates how the energy revolution that has taken the world by surprise in the last decade is creating both new opportunities and new challenges at a global level, altering the balance of power between countries, and shaping their actions and attitudes toward one another.

Understanding this interaction between energy and international politics is and will continue to be essential to appreciate the unfolding global landscape. It will arguably be more important in driving foreign policy outcomes than many of the other issues consuming the calories of policymakers and the airtime of pundits.

The twelve months of 2016 were sobering for those who believed they understood the underlying dynamics of many global trends. The frequency with which conventional wisdoms and established understandings were proven wrong should spur us to look for new lenses through which to comprehend the world. This book offers its readers just that. Many readers will be surprised at how powerful the prism of energy is in making sense of global events. While surely not determinative on its own, energy is and will continue to be a major driver of how the world works. 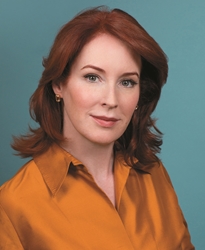 Meghan L. O’Sullivan is the Jeane Kirkpatrick Professor of the Practice of International Affairs at Harvard University’s Kennedy School of Government. She is also the Director of the Geopolitics of Energy Project, which explores the complex interaction between energy markets and international politics. Between 2004 and 2007, she was special assistant to President George W. Bush and Deputy National Security Advisor for Iraq and Afghanistan for the last two years of her tenure. She lives in Cambridge, Massachusetts. Windfall: The New Energy Abundance Upends Global Politics is her third book.