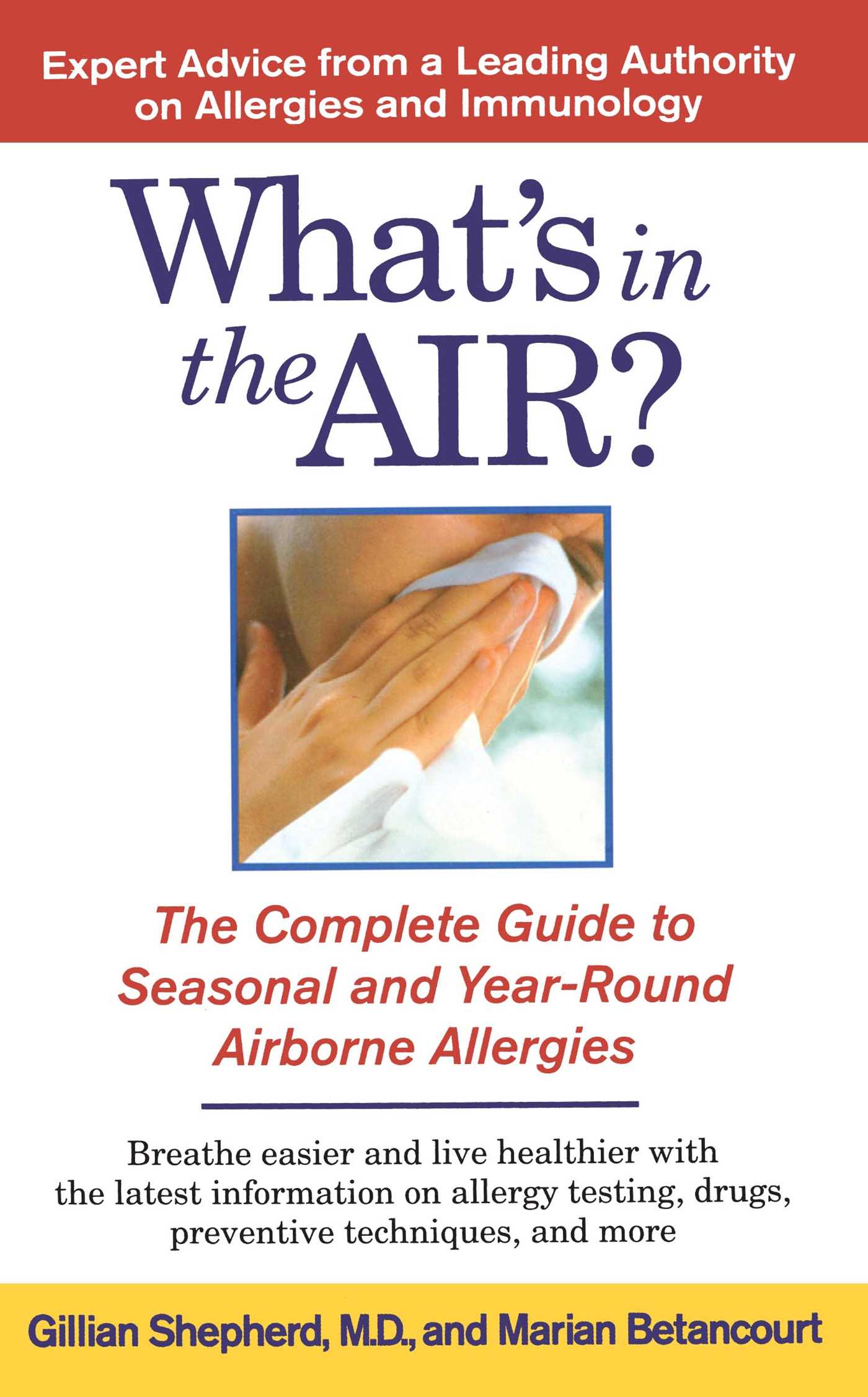 What's in the Air?

The Complete Guide to Seasonal and Year-Round Airb

By Gillian Shepherd and Marian Betancourt
LIST PRICE $17.99
PRICE MAY VARY BY RETAILER

What's in the air?

Pollen, mold spores, dust mites, and pet allergens affect and irritate more than 60 million Americans. That number is increasing every day-and allergies are now the sixth leading cause of chronic illness. But most people don't know a great deal about these airborne allergens-other than how miserable they make them feel. Now, Dr. Gillian Shepherd will bring comfort to sufferers with the latest research on the causes of and available treatments for allergic rhinitis (hay fever) and allergic conjunctivitis (teary eyes).

Discover:
-how and why your immune system reacts to allergens
-the worst pollens: where they are and how far they travel
-how to help your child cope with allergies
-the truth behind the word “hypoallergenic”
-tips for “allergy-proofing” your home, office, and car
-the effect that changing weather may have on your symptoms
-when allergy shots can help and when they can't
-exciting new medical research that will eventually cure allergies.

The Allergy Boom and the Hygiene Hypothesis

Not everyone is programmed to develop allergies. You have to inherit the tendency. If you have close family with a history of hay fever, asthma, hives, eczema, or specific food or drug allergies, there is a chance you will develop allergy symptoms.

When I was twelve, I baby-sat at a home where there was a cat. Until that time I had very limited exposure to cats, so I happily played with it. After a short time my eyes started to itch, so I rubbed them. Before I knew it, both my eyes were swollen and I could barely see. This was my introduction to allergies.

At that time I lived in Rochester, Minnesota. My family had moved there from Belfast, Northern Ireland, when I was ten. Shortly after the baby-sitting incident, I started to develop sneezing and a runny and stuffy nose in the late summer. The Mayo Clinic scratched my back with multiple substances and told me I was allergic to ragweed -- "the king" of the pollens in the Midwest from August 15 to the first frost. There was no ragweed in the United Kingdom and it took me two seasons in Minnesota to develop the allergy. I had lots of company sneezing and sniffling away every September.

The main treatment then was Chlor-trimeton, an antihistamine that made me snooze through my classes, so generally I just suffered with my tissue box at hand. My parents then told me that they had had allergy-related problems in the past. My father had hives as a child and my mother had asthma as a teenager. They both "outgrew" their allergies. Meanwhile, I was sneezing and itching and my brother was blissfully unaffected. Why me?

Just because my father had hives as a child and my mother had asthma as a teenager did not mean I was programmed to get these specific allergy problems. Instead, I inherited a tendency to get any one of the various types of allergies. In my case, this turned out to be nasal and eye symptoms from cats and ragweed pollen.

Your immune system is like your body's homeland defense system. It guards you against foreign invaders such as bacteria or cancer cells. Occasionally it mistakes itself for a foreign invader, reacting against part of your body. This causes autoimmune disease. In the case of allergy, the immune system overreacts to innocent substances such as cats or pollen particles in the air. Normal, nonallergic people don't overreact to these substances. But if you are allergic you end up with sneezing, runny or stuffy nose, and teary eyes.

The human immune system is a giant network. Think of it as a road map showing different routes. Some paths protect us from foreign substances such as infection and cancer. One of the main routes, however, leads to allergies. If you are programmed to be allergic, inhale a speck of dog allergen and your immune system will crank out quantities of a chemical called immunoglobin E (IgE). The IgE charges through your bloodstream and sticks to special cells in the lining of your nose, throat, and lungs. It then acts as a sentry. If it encounters dog allergen again, it tells the cell to pump out powerful chemicals such as histamine. These chemicals make your nose and eyes run and cause itching and inflammation, among other symptoms.

The same reaction can happen in the lining of the eyes, causing itching and swelling. In the lungs it causes asthma. If the allergy is severe and the allergy substance is inside the body (food, medicine, or a bee sting), the reaction can occur throughout the body resulting in hives or a life-threatening reaction called anaphylaxis, which can result in airway swelling and difficulty breathing. IgE, the "allergic antibody," is normally present in very low levels, but is found in larger quantities in people with allergies.

Allergies also wax and wane. A childhood allergy to inhaled substances often goes away, but others may later appear. In my case, I lost my allergy to ragweed but later developed one to tree pollen. Unfortunately, two of my three children also inherited this problem. My husband has no allergies, so it came from me.

My own experience with allergies contributed to my ultimate choice of medical specialty, although there was never a doubt that I would be involved in medicine. I grew up surrounded by doctors -- my father and his two brothers, my brother, and most of my cousins practice medicine. There are eleven doctors in my immediate family. Nevertheless, my initial interest after college was a Ph.D. research program rather than medical school. I eventually became involved in immunology research and decided I needed a broader background and so finally switched to medical school.

During training in internal medicine I selected allergy immunology as a subspecialty because I was intrigued by the complexity of the immune system. Then and even more so now, immunology was the hot field. Most of the other subspecialties were based on an organ, such as the heart, or lungs. The immune system interacted with every part of the body. Even in the early days of research, it was evident that it was a very powerful system with a role in every other system in the body. As a victim of dysfunction of the immune system, it was clear to me that the answer to allergies lay in further understanding and then manipulating the immune system.

Today allergies are booming. And unlike the stock market this trend has been rising steadily. More than 60 million Americans -- 20 percent of the population -- suffer from allergies and that number is fast increasing. According to the National Institutes of Health (NIH), 40 million people -- the largest percentage of the allergic public in the United States -- are coping with allergic rhinitis, commonly known as hay fever, and allergic conjunctivitis. This is probably a low estimate because allergies are often underreported. Allergies are now the sixth leading cause of chronic disease in the United States.

Medical scientists are not exactly sure why the incidence of allergies is increasing. The prevailing theory is that the current population -- in the United States and other developed countries -- has been brought up in an environment that is too clean. When the immune system has no infections to fight, it finds something else to pick on, like a grain of pollen or mold spores. This theory is called the hygiene hypothesis. It seems to be a problem of advanced countries, because in developing countries like India and China, allergies are less of a problem.

In the twentieth century, we wiped out many infectious diseases with improved sanitation and drinking water, and with the use of antibiotics. From the 1930s to the 1950s, Dr. Spock advised parents to keep babies away from other children to prevent the spread of germs. This may have been bad advice; we know now that if you are an only child you may be more likely to have allergies than children from a large family. Children who attend day-care centers seem to have fewer allergies, too, possibly because their immune systems are actively engaged in fighting off infections. If this explanation for increasing allergies is true -- that is, that we are exposed to fewer infections so our immune system defaults to allergy production -- then we may be making the situation worse by exposing our children to more indoor allergy substances. Our children stay inside more, watching TV and computer screens instead of playing outside. This exposes them to indoor allergens such as pets, dust mites, and cockroaches.

We are on the forefront of many new treatments as a result of advances in molecular biology, enabling us to manipulate the immune and allergy system by redirecting it back to fighting infections. If we succeed, allergies will be less prevalent. An anti-IgE drug is in the last stages of testing necessary before FDA approval. This drug may also have a potent role in the field of food and drug allergy. Many other substances are being investigated in an attempt to decrease the system's tendency to overreact. We can't "cure" the problem yet, because we can't reprogram the genetic system, but we hope to eventually be able to manipulate it to decrease the amount of allergies.

In the meantime, there is a great deal you can do. The goal of an allergist is to help you manage your allergies so that they do not interfere with the enjoyment of life. That's the reason for this book. By teaching you what is in the air and how it travels, you can learn to avoid some of the worst allergy situations. By helping you understand how to manage the air in your home, you can make it as allergy proof as possible. And also, by outlining the techniques and dynamics of medical therapy, we hope to help you use medications and work with your doctor in a way that will keep allergies under control.

We are focusing here on allergic rhinitis (hay fever) and allergic conjunctivitis, because these problems affect the largest number of people, but we hope this book will give you a greater understanding of all allergy-related conditions. There are chapters about coping with allergens on the job, helping your children with allergies, and where to go to get away from your allergies. Like any chronic illness, dealing with allergies takes a combination of understanding, self-management, prevention, and medication. 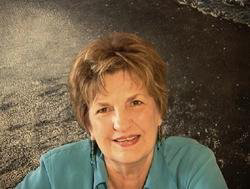 Marian Betancourt has written numerous books on health and women's issues. Her most recent books include What's in the Air?, a guide to managing seasonal and year-round allergies; and Playing Like a Girl: Transforming Our Lives Through Team Sports. She has written for the Associated Press, Philadelphia Inquirer Magazine, Sports Illustrated, and other national publications.

What's in the Air?

The Complete Guide to Seasonal and Year-Round Airb

By Gillian Shepherd and Marian Betancourt
LIST PRICE $17.99
PRICE MAY VARY BY RETAILER