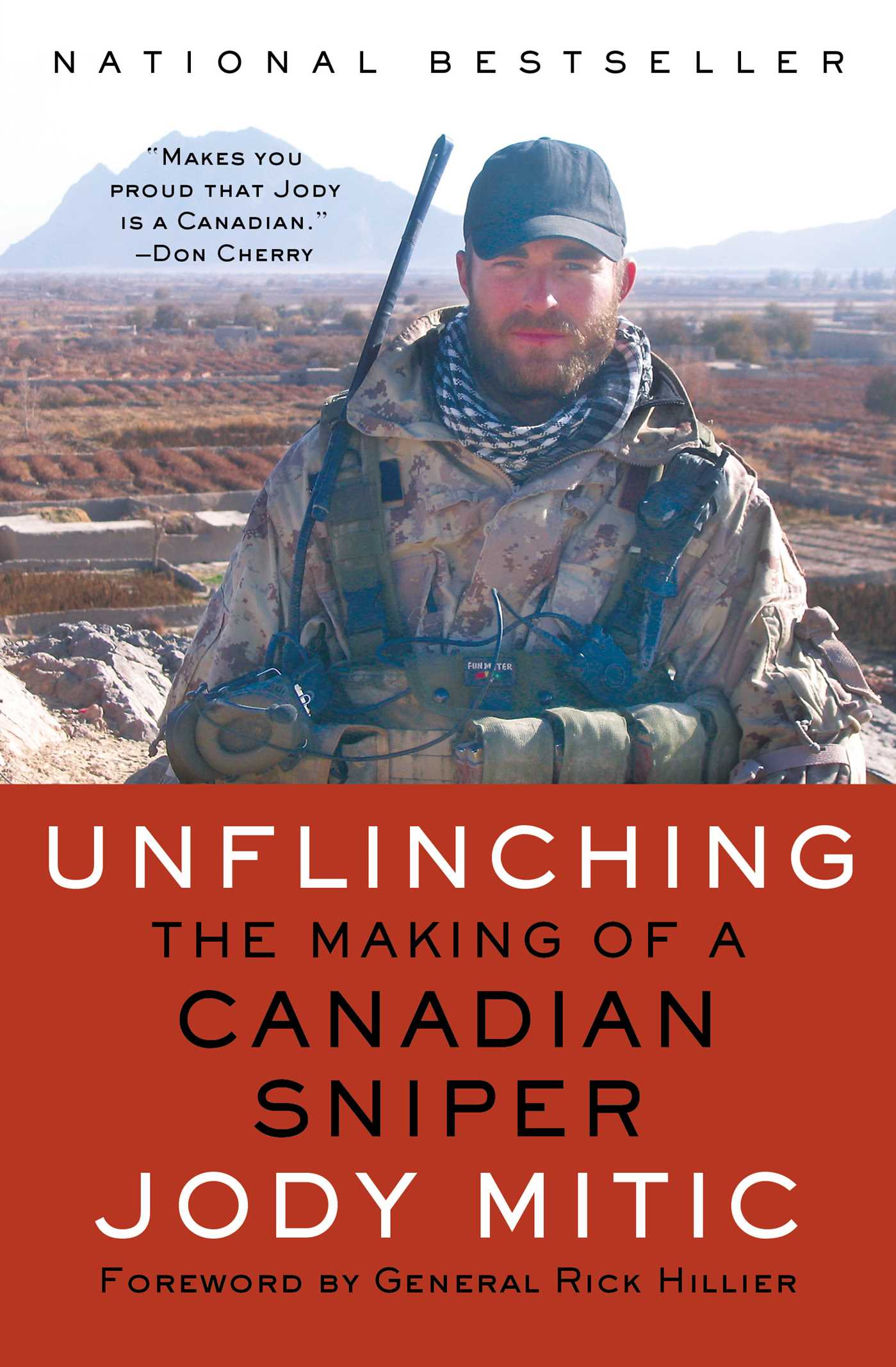 By Jody Mitic
LIST PRICE $13.99
PRICE MAY VARY BY RETAILER

Elite sniper Jody Mitic loved being a soldier. His raw, candid, and engrossing memoir follows his personal journey into the Canadian military, through sniper training, and firefights in Afghanistan, culminating on the fateful night when he stepped on a landmine and lost both of his legs below the knees.

Afghanistan, 2007. I was a Master Corporal, part of an elite sniper team sent on a mission to flush out Taliban in an Afghan village. I had just turned thirty, after three tours of duty overseas. I’d been shot at by mortars, eyed the enemy through my scope, survived through stealth and stamina. I’d been training for war my entire adult life. But nothing prepared me for what happened next.

A twenty-year veteran of the Canadian Armed Forces, Jody Mitic served as a Master Corporal and Sniper Team Leader on three active tours of duty over the course of seven years. Known for his deadly marksmanship, his fearlessness in the face of danger, and his “never quit” attitude, he was a key player on the front in Afghanistan. As a sniper, he secured strongholds from rooftops, engaged in perilous ground combat, and joined classified night operations to sniff out the enemy.

One day in 2007, when he was on a mission in a small Afghan village, he stepped on a landmine and the course of his life was forever changed. After losing both of his legs below the knees, Jody was forced to confront the loss of the only identity he had ever known—that of a soldier.

Determined to be of service to his family and to his country, he refused to let injury defeat him. Within three years after the explosion, he was not only walking again, he was running. By 2013, he was a star on the blockbuster reality TV show Amazing Race. In 2014, Jody reinvented himself yet again, winning a seat as a city councillor for Ottawa.

Unflinching is a powerful chronicle of the honour and sacrifice of an ordinary Canadian fighting for his country, and an authentic portrait of military life. It’s also an inspirational memoir about living your dreams, even in the face of overwhelming adversity, and having the courage to soldier on.

Unflinching PROLOGUE NEVER GIVE UP
IT WAS 2007. I was a master corporal and sniper team leader in the Canadian Armed Forces. I’d just celebrated my thirtieth birthday in Afghanistan. I’d survived three tours over the course of seven years. I had been preparing for war for my entire adult life. But nothing prepared me for what was about to happen next.

On January 11, a week after my birthday, our three-man elite sniper unit—Barry, Kash and me—led by my boss, Gord, was sent on a mission. We were to intercept Taliban insurgents fleeing the Canadian Forces as we advanced on an Afghan village. We stepped through the wire at Strong Point Centre and headed through the thick mud of a farmer’s field. A while later, we arrived at an opening in a wall leading into the village. I was bringing up the rear and I couldn’t see what was ahead, but Barry could. Barry was my point man and was always razor-sharp.

Barry went through the opening first, followed by Gord and Kash, rifles at the ready. They all cleared the entry without issue. I was up next.

I took those two steps up, clearing the entry. In the green glow of my night vision, I saw Kash covering the six o’clock position. I tapped him on the shoulder to signal that I was in position and he moved to follows the others. We always keep ten metres between us when we are moving, just in case something goes wrong.

I sensed Kash moving away from me as I watched our rear for threats. When I felt the right amount of time had passed, I looked over my shoulder to confirm we were keeping the proper spacing. I took one last look at our rear and then turned to follow the team. But as my right foot touched the ground, a massive orange fireball soared across my face. For a few seconds I was floating, weightless, suspended in space and time. I didn’t hear a sound.

The next thing I knew, I was on the ground. My mouth, eyes, ears and nose were full of dirt. I was confused. My night vision was gone. Where was my trusty C-8 carbine? I’d had it at my side for the last five months. And then the pain hit—a pain so intense that it completely overwhelmed my body.

Such a small thing, an anti-personnel land mine—about the size and shape of a thick hockey puck—but full of deadly explosives.

I am not very religious, but they say there are no atheists in foxholes. As I punched the ground as hard as I could, I screamed, “Oh god! Oh god! Oh god!”

My fellow snipers rushed to my side. “Sorry, guys. I just fucked the mission.” At that moment, this was all I cared about.

“Fuck, Jody. Don’t worry about it, man,” Barry said. It was dark. My eyes were full of mud. I tried to look down at my legs but I couldn’t. Barry crouched over me, blocking my view. Whatever was going on with my legs, he didn’t want me to see it.

The next hour was the longest of my life. Your mind goes to the weirdest places in a situation like that. I was so thirsty but refused to drink much. I remembered an episode of M*A*S*H in which Hawkeye says it’s a bad idea for the severely wounded to chug water. For some reason, in that moment, I chose to take medical advice from a TV show that had been off the air for decades.

With each passing minute, I was growing weaker and weaker. Barry and Gord were both kneeling next to me doing first aid as Kash kept watch for signs of the enemy.

“Of course you’re going to make it. Never give up, Jody. You know that.”

Never. Give. Up. The phrase repeated over and over in my head. It still does to this day. 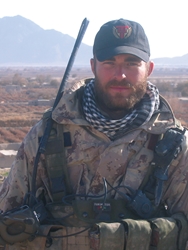 Jody Mitic is a twenty-year Canadian Armed Forces veteran and Sniper Team Leader. A sought-after motivational speaker, he is a respected advocate for wounded veterans, people with disabilities, and amputees. His memoir, Unflinching: The Making of a Canadian Sniper, is a perennial bestseller. He founded the Never Quit Foundation and currently sits on the Board of Directors of Won with One, an organization devoted to helping physically challenged athletes realize their dreams. He currently serves on Ottawa City Council. Follow him on Twitter @JODYMITIC.

“Unflinching is one of those books that you just can’t put down. What a book! What a life! Jody is an inspiration. He never quit, he never gave up, no matter how tough the road was. This book will make you proud that Jody is a Canadian.”

“Jody Mitic’s harrowing and heroic life story reveals Canada’s frontline soldiers as I know them to be: intelligent, complex, emotional and loyal. ... This book is inspiration for anyone hoping to re-invent their life. Jody has triumphed at it time and again.”

– Kevin Newman, journalist/ancho and co-author of All Out

“I’ve read it all, start to finish, in one enthralled session. Unflinching is raw, personal, unforgiving, unrelenting and draws one into Jody’s life, with a vividness and a colour that’s visceral.”

“Unflinching is pure Jody Mitic—smart, funny, honest, and tough. I think the first time I saw Jody he was kicking the hell out of the army half marathon on his new feet; the next time, he was a newly elected Ottawa councillor, and now he’s an accomplished storyteller. He’d be almost irritatingly capable if he wasn’t also a lovely human being.”

– Christie Blatchford, author of Fifteen Days: Stories of Bravery, Friendship, Life and Death from Inside the New Canadian Army

“Over the last several years, Jody Mitic has been a larger-than-life figure in the military community. Reading his experiences in his own clear, humble, funny, and no-bullshit prose has offered insight to the very real human at the core of his story. I would recommend Unflinching to any Canadian, military or civilian.”

– Matt Lennox, author of The Carpenter and Knuckle Head

“The pacing and quiet drama of his stories of battlefield missions are excellent. He's got a nice touch for keeping you glued to his narrative. And it's in his portrayal of the physical and psychological effects of intense combat and command tactical gaffes that the memoir really takes off.”

“Unflinching: The Making of a Canadian Sniper, is a deeply personal retelling of the 38-year-old’s life in the military.”

“Unflinching is a raw and sometimes brutal journey into the heart and life of a soldier.”

“Unflinching is a raw and candid memoir that follows the personal journey of a 20 year Canadian Armed Forces CAF Veteran and Sniper Team Leader Jody Mitic.”

“Mitic’s long and courageous road to recovery, from a life-changing injury and subsequent addiction to pain killers to becoming an outspoken advocate of injured veterans an Ottawa city councilor, is the stuff of inspiring movies.”

By Jody Mitic
LIST PRICE $13.99
PRICE MAY VARY BY RETAILER