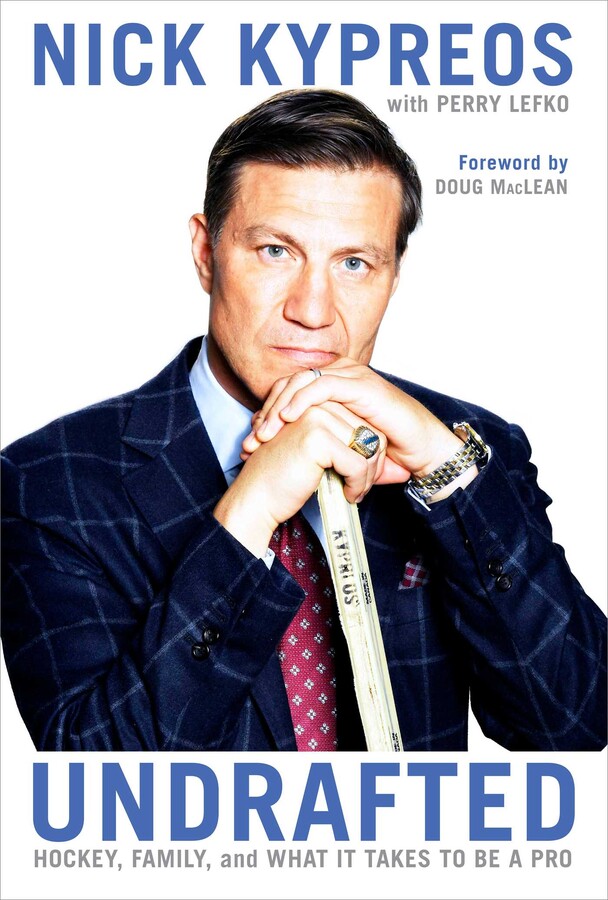 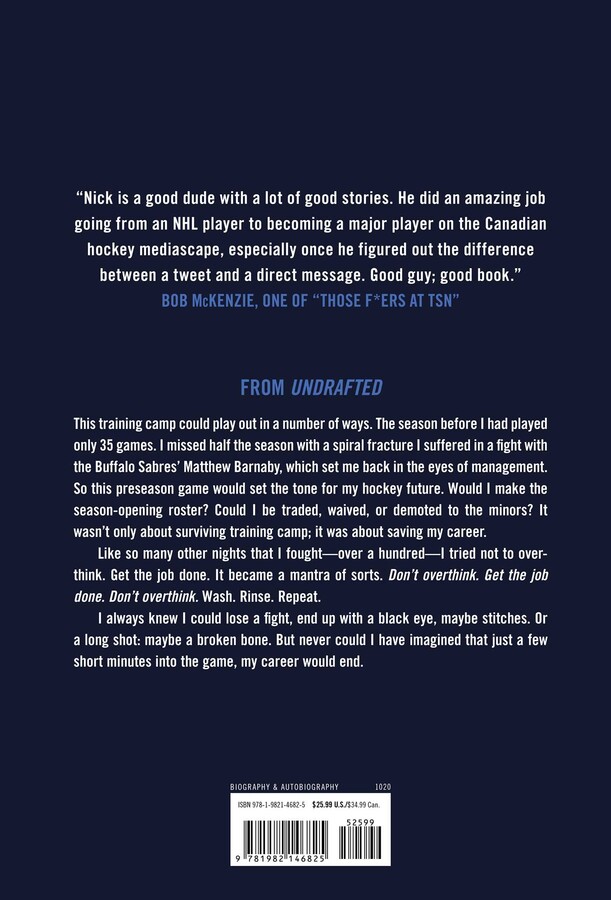 Hockey, Family, and What It Takes to Be a Pro

By Nick Kypreos
With Perry Lefko
LIST PRICE $25.99
PRICE MAY VARY BY RETAILER

True stories and hard-won lessons about a life of hockey, from a Stanley Cup champion and top analyst.

As a child growing up in Toronto, Nick Kypreos lived for hockey and dreamed of following in his idols’ footsteps to play in the NHL. Hockey was an important part of the Kypreos household. It was largely through the game that his immigrant Greek parents acclimatized to their new lives in Canada, and from a young age “Kyper” proved he was more than good enough to move through the ranks. But he was never a top prospect—he didn’t even attend the NHL draft when he became eligible. And yet, through dedication and constant improvement, he made it to the show.

Kypreos built a career on his tireless work ethic and made a name for himself for always having a positive influence on team morale. A medium-weight fighter, he squared off with the league’s toughest players, including Chris Simon, Joey Kocur, Tony Twist, and Scott Stevens—anything to give his team an edge. Ultimately, he was brought to the New York Rangers to help them win the Stanley Cup in 1994—their first in fifty-four years—with the legendary Mark Messier. And then he got to live his other dream: playing for his hometown team, the Toronto Maple Leafs.

When a concussion forced him to retire early, it changed his life. But the lessons he’d learned on the ice over eight seasons helped him build a new career as a top hockey analyst and personality for Sportsnet. For twenty seasons he provided unique insight on the evolving game, and a player’s perspective on the biggest discussions of the day.

Revealing, fun, and brutally honest, Undrafted shows the challenges of being a pro player. It’s a story of the resilience it takes to prove yourself every night, and how the right attitude can lead to the greatest success, not only in the arena, but in life.

Prologue PROLOGUE
With one year left on my contract with the Toronto Maple Leafs, there was no question I had to fight to keep my job, literally. I had over 400 career games and 1,200 penalty minutes, yet it meant absolutely nothing. With Cliff Fletcher out as general manager, and Ken Dryden taking over as president, and Mike Smith as associate GM, I would have to prove myself all over again, just like back when I was a rookie at training camp with the Flyers twelve years earlier. That night, we had a preseason game in New York and I knew I was going to have to fight. It was September 15, 1997.

They like to tell you the slate is clean for every player starting training camp, but that couldn’t have been further from the truth for me. Leafs management put the bug in Tie Domi’s ear that they wanted to see more toughness out of me. Tie gave me the heads-up just before we embarked on the preseason games. GMs have a tendency to forget your contributions in the past and, more importantly, they don’t really give a damn. “What have you done for me lately?” is really all that matters to them. That part of the game will never change.

The major off-season roster changes that brought the Leafs Derek King and Kris King (no relation) made that abundantly clear. Kris and I had similar tough player reputations. I knew at this training camp I wasn’t just fighting for my job with the Leafs: I was fighting to prove to the rest of the league that I could still get the job done, that I still had value as a role-player.

This training camp could play out in a number of ways. The season before I had played only 35 games. I missed half the season with a spiral fracture I suffered in a fight with the Buffalo Sabres’ Matthew Barnaby, which set me back in the eyes of management. So this preseason game would set the tone for my hockey future. Would I make the season-opening roster? Could I be traded, waived, or demoted to the minors? It wasn’t only about surviving training camp; it was about saving my career.

Some enforcers in the NHL had so much anxiety that they couldn’t sleep the night before a game. The anticipation was intense and some resorted to alcohol or sleeping pills. For me it was the opposite. I had to be in control of my mind. That’s why I never did drugs. I was quite comfortable with my ability to control alcohol generally, but with drugs I was never willing to take that chance.

When I broke into the league, I had never seen players throwing up before a game. If there’s anything that can deflate a dressing room full of testosterone, it’s the sound of a guy puking in the garbage can. In this way, tough guy Neil Sheehy is one of the players I remember most. When I played with him in Washington, Neil fought some big boys. I watched him on some occasions and his way of dealing with nerves was through his stomach. Maybe it had something to do with his Battle of Alberta rivalry against Wayne Gretzky and the Oilers in the eighties. Facing Dave Semenko, Marty McSorley, and Kevin McClelland would be enough to make anyone sick. Believe it or not, for some players getting sick before a fight became so commonplace that it was actually routine. There is no denying the brain-gut connection. Tough guys did whatever it took to help alleviate their nerves. Who am I to ever question that? But I could never comprehend being that affected before competition. Maybe it was my saving grace. Maybe it was my demise.

My routine that night before the exhibition game was the same as usual. I’m not overly superstitious, but my pregame routine was similar from one game to the next. I arrived at the rink at the same time, around 4:45 p.m. I taped my sticks, and then put my equipment on in the same order, all prior to warm-up. I wanted to let my instincts take over from there. Get the job done. Don’t overthink. I’d keep telling myself this before heading onto the ice for the first period.

I always knew I could lose a fight, end up with a black eye, maybe stitches. Or a long shot: maybe a broken bone. But never could I have imagined that just a few short minutes into the game, my career would end. 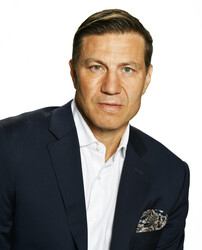 Nick Kypreos is a Canadian retired professional ice hockey left winger who played eight seasons in the NHL for the Washington Capitals, Hartford Whalers, New York Rangers, and Toronto Maple Leafs. In 1994, he won the Stanley Cup with the New York Rangers, helping the historic franchise end a fifty-four-year Cup drought. Following his retirement from the NHL in 1998, he started a new career as one of the first broadcasters for Sportsnet. Over twenty-one years on air, he became a top hockey analyst, culminating with a seat on Hockey Night in Canada. Connect with him on Twitter @RealKyper.

“It was such a joy to sit beside Nick as he prepared to go on the air. I swear he filled a notebook every night. What he was creating was a way of dreaming his world into being. Truly a warrior with a personal vision who took basic steps in every walk of life to ensure everyone’s success. He’s your essential Game 7 guy.”
— RON MacLEAN, broadcaster

“Having known Kyper for over twenty-five years, I’ve had a front row seat for many of his triumphs and trials in the game of hockey and Undrafted takes you through them all. It’s a thoroughly entertaining read from one of the true characters of the game who has an enormous personality and a heart of gold.”
— CHRISTINE SIMPSON, broadcaster

“Nick is a good dude with a lot of good stories. He did an amazing job going from an NHL player to becoming a major player on the Canadian hockey media-scape, especially once he figured out the difference between a tweet and a direct message. Good guy; good book.”
— BOB McKENZIE, one of “those f*ers at TSN”

“Nick has always been one of the biggest characters in the game and Undrafted captures his amazing underdog story so well. Don’t let his tough exterior fool you—Nick is a softy who shares his life story with great humour and class.”
— DAVID AMBER, host of Hockey Night in Canada and NHL on Sportsnet

“Face-first in his own blood after a fight gone horribly wrong at Madison Square Garden 23 years ago, there were fears Kypreos would never get up. But while his playing career was done, an extraordinary second life began. With zero broadcast training, the tough guy became a dogged insider of Sportsnet and its ratings war with TSN. Kypreos concisely explains the inner workings of the business, dueling daily news shows of the rivalry, and how each network lived for the big scoop on Trade Deadline or Free Agent Day. Kypreos also has an eventful past, which former Sun sports writer Lefko draws out in chapters about ‘growing up Greek’ in Toronto, junior hockey, a Cup win, gossip page fodder in New York, his time in the Leafs fish bowl, and Saturday night on set.”
— Ottawa Sun

Hockey, Family, and What It Takes to Be a Pro

By Nick Kypreos
With Perry Lefko
LIST PRICE $25.99
PRICE MAY VARY BY RETAILER