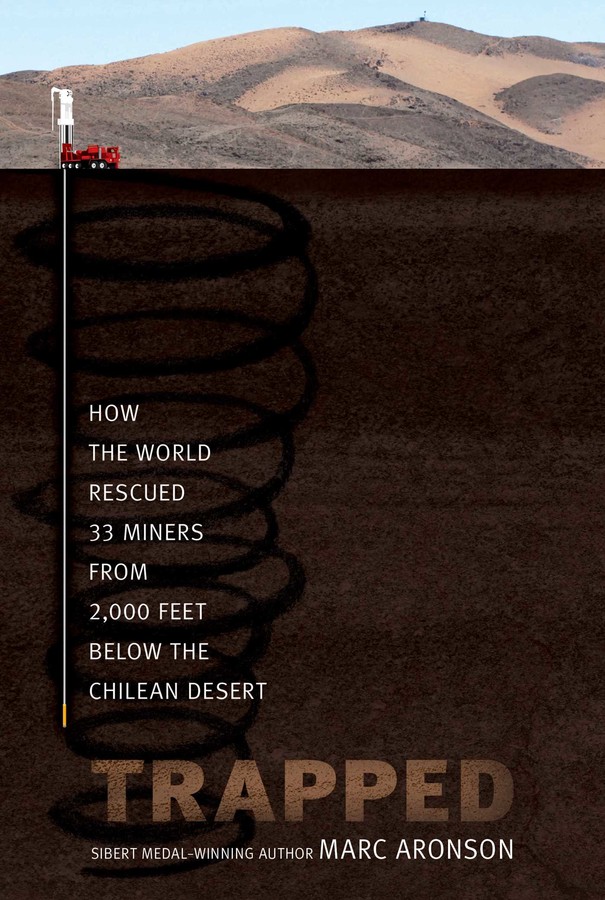 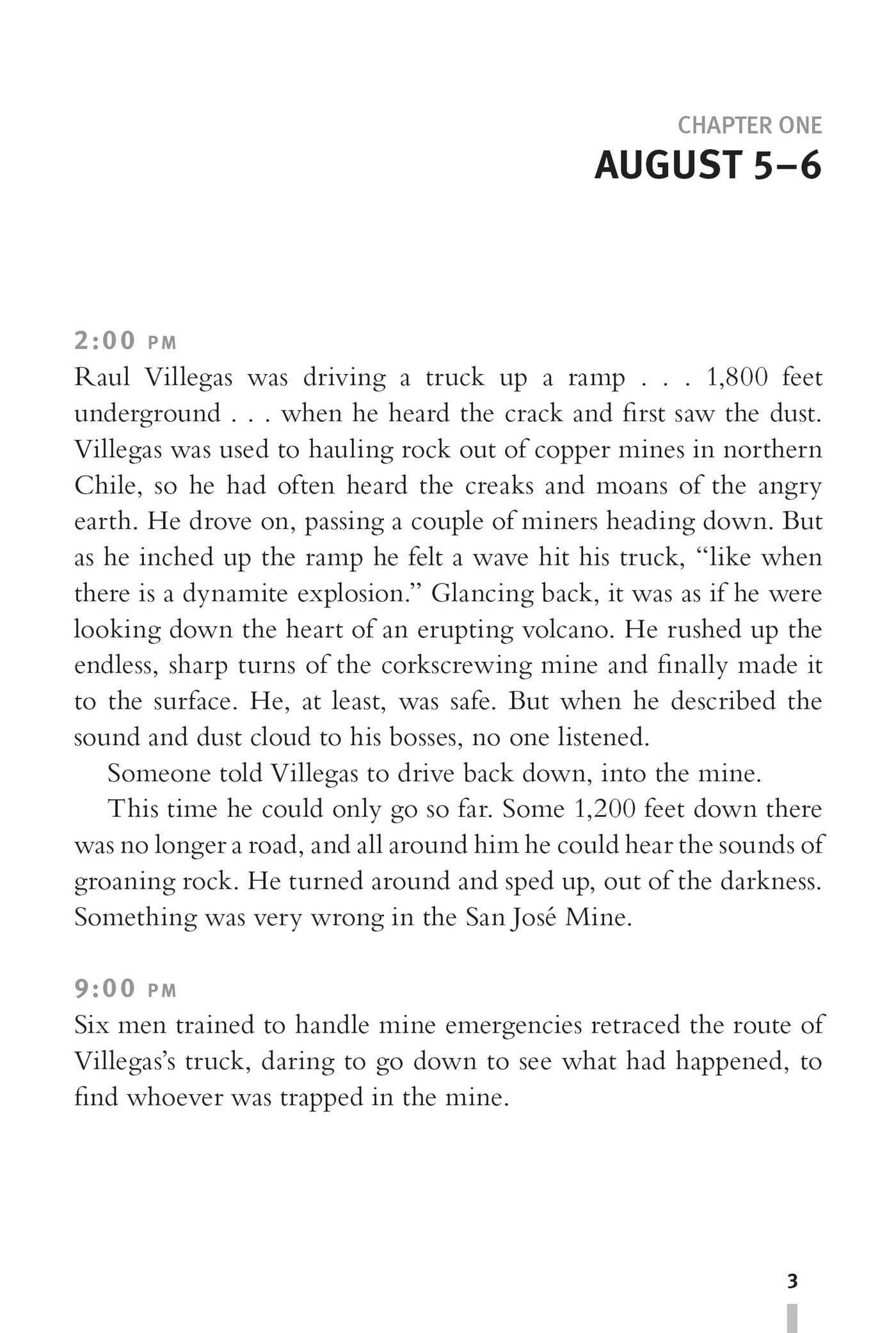 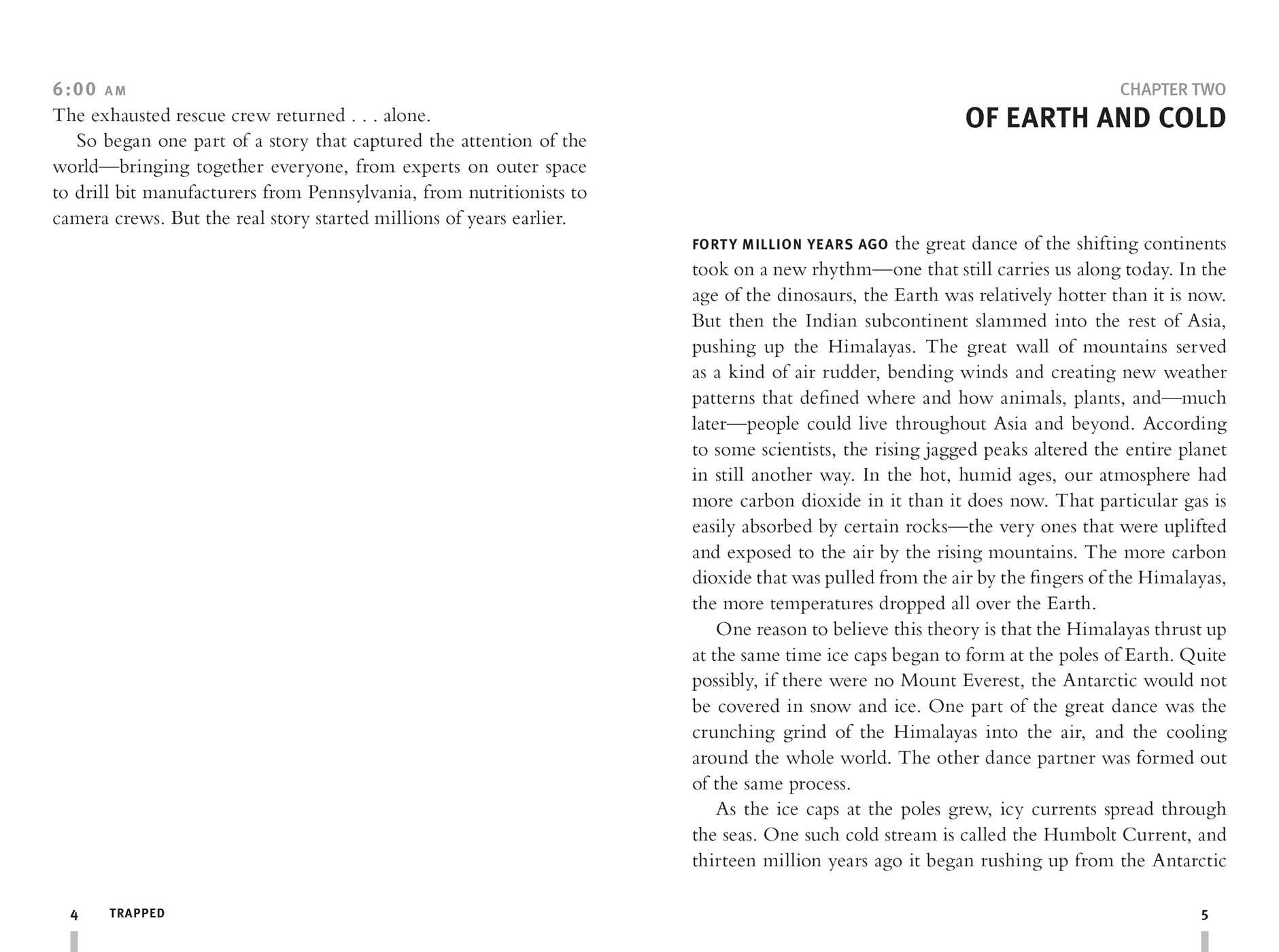 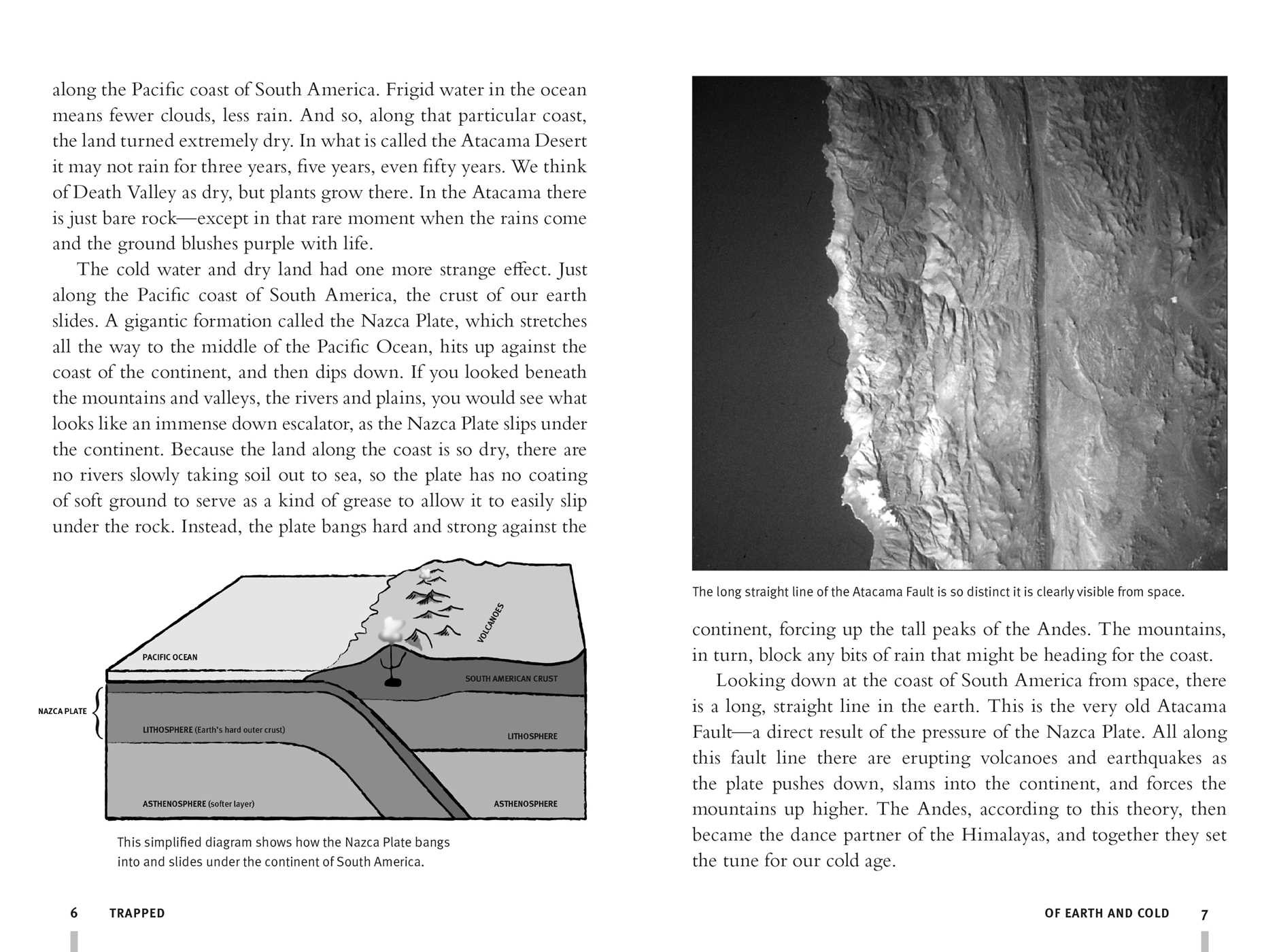 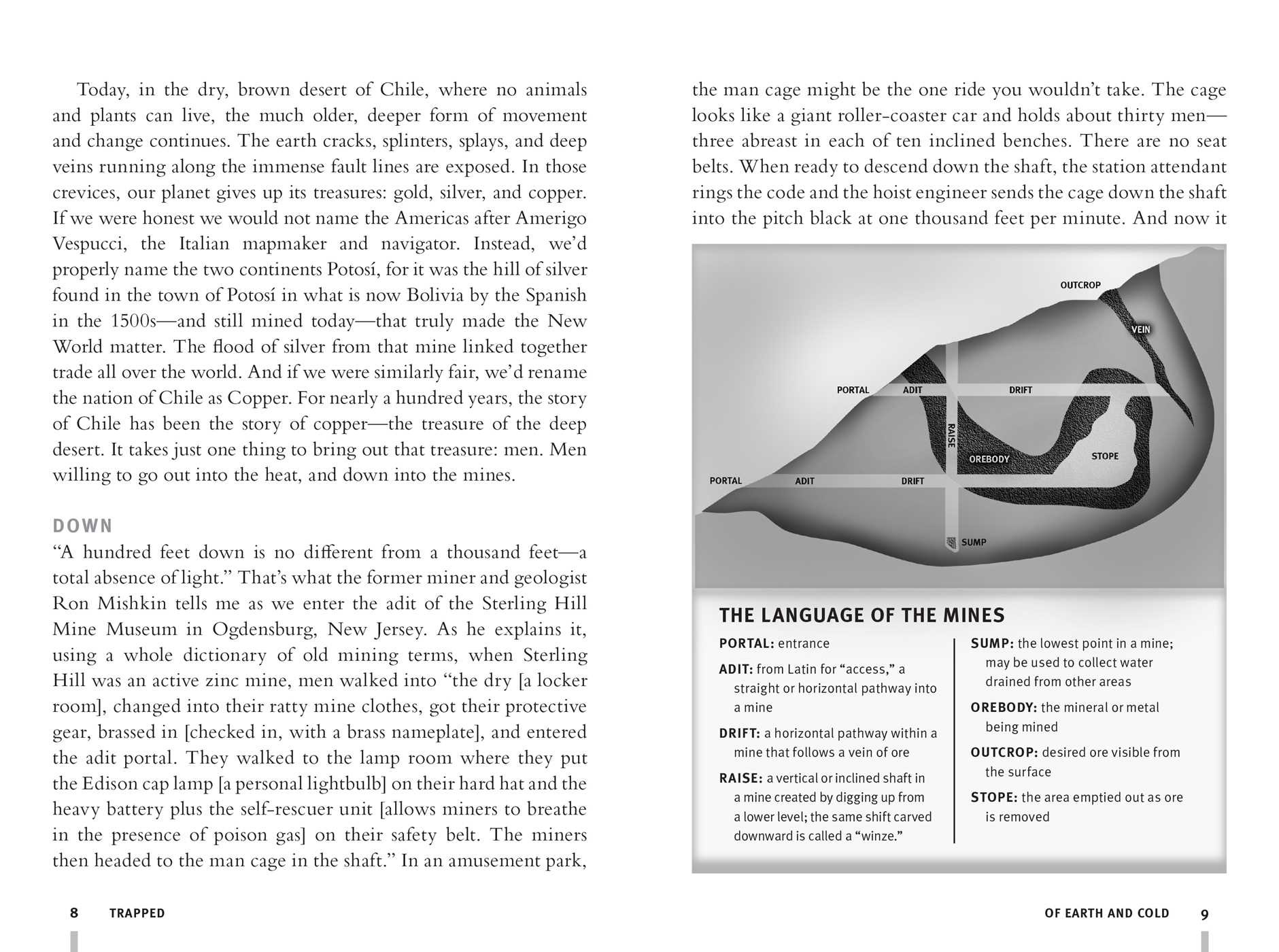 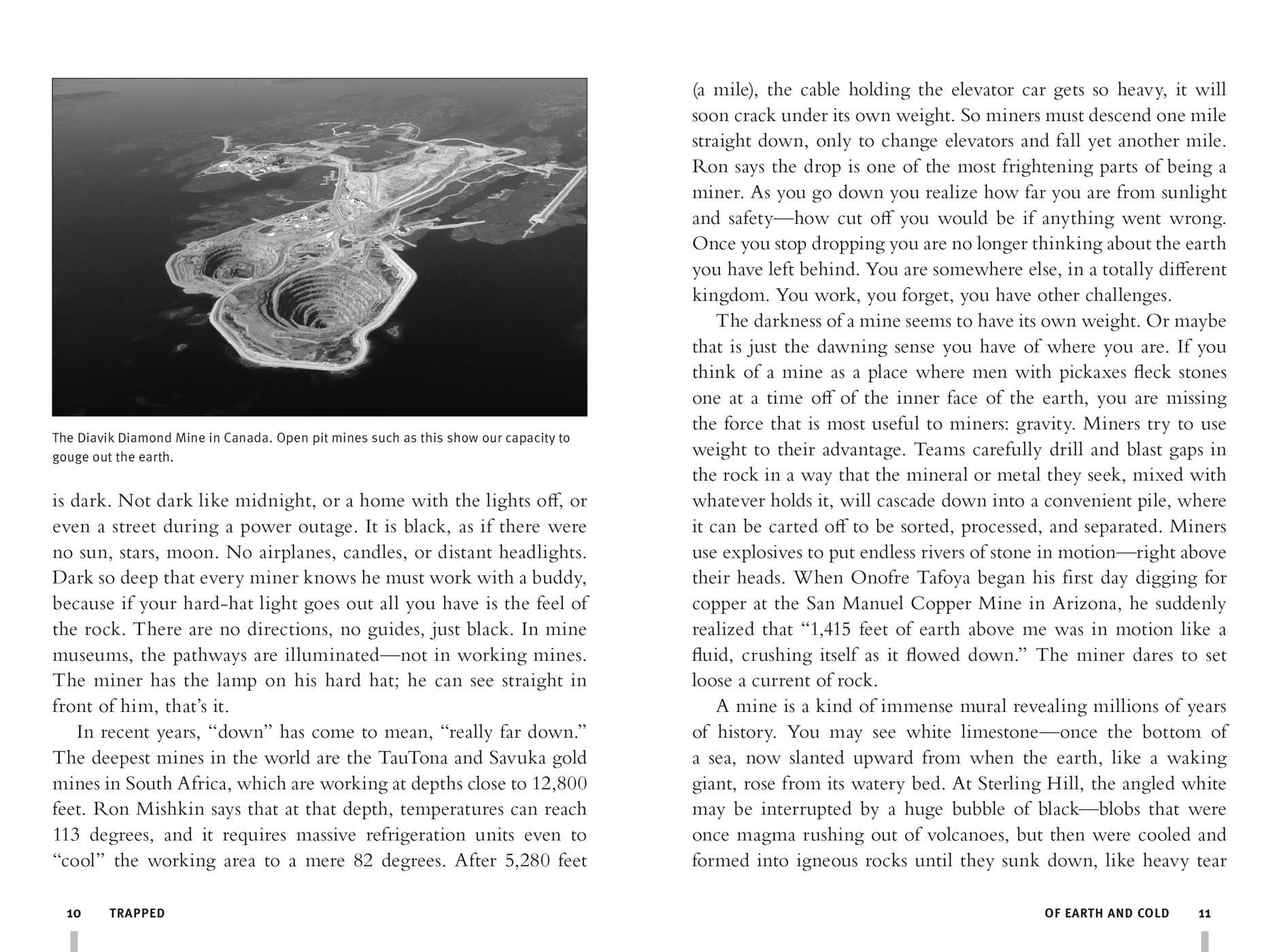 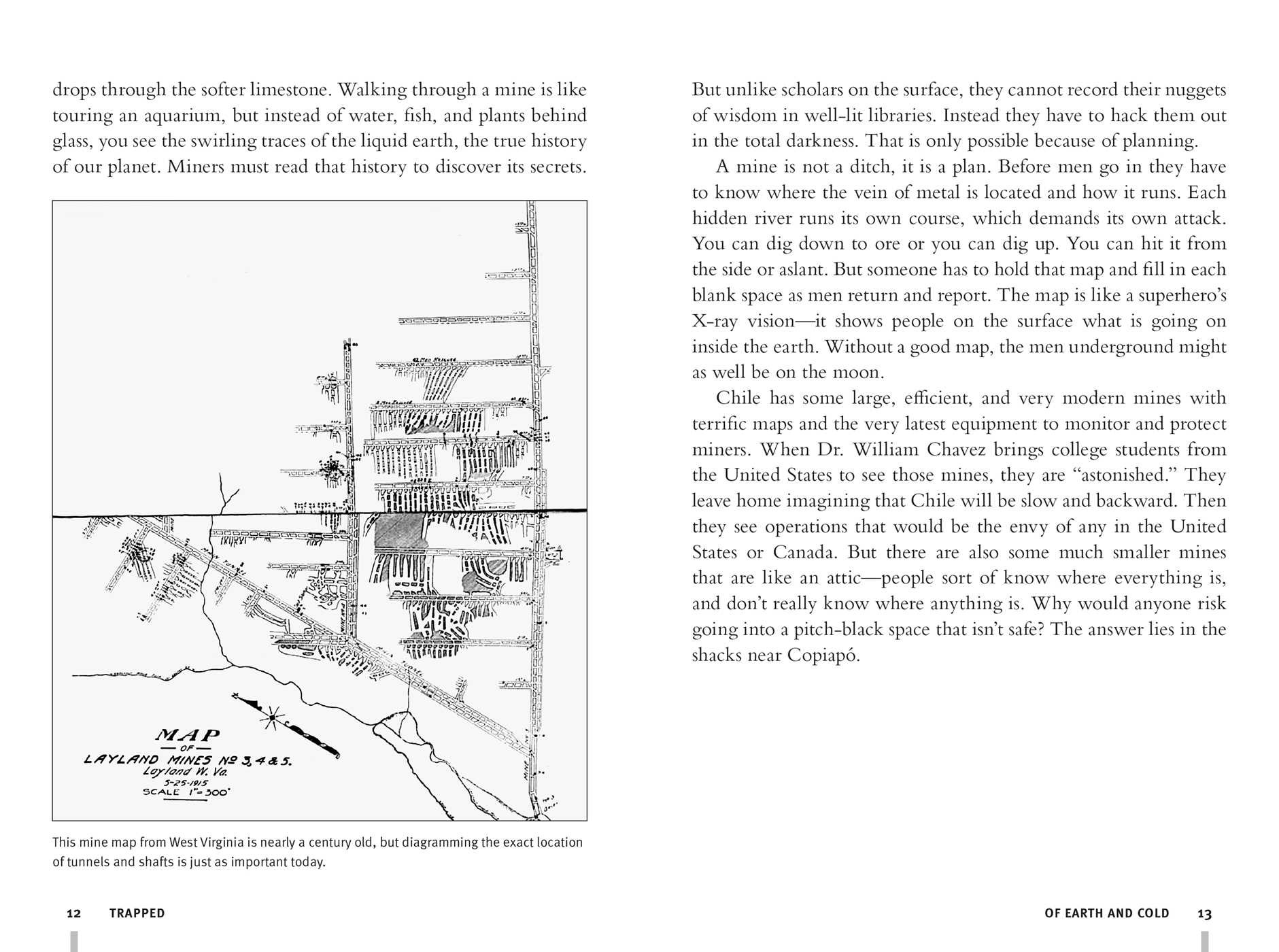 By Marc Aronson
LIST PRICE $7.99
PRICE MAY VARY BY RETAILER

The amazing story of the trapped Chilean miners and their incredible rescue that Publishers Weekly calls “a riveting, in-depth recounting of the events that held the world rapt.”

In early August 2010, the unthinkable happened when a mine collapsed in Copiapó, Chile, trapping thirty-three miners 2,000 feet below the surface. For sixty-nine days they lived on meager resources with increasingly poor air quality. When they were finally rescued, the world watched with rapt attention and rejoiced in the amazing spirit and determination of the miners. What could have been a terrible tragedy became an amazing story of survival.

In Trapped, Marc Aronson provides the backstory behind the rescue. By tracing the psychological, physical, and environmental factors surrounding the mission, Aronson highlights the amazing technology and helping hands that made it all possible. From the Argentinean soccer players that hoped to raise morale, to NASA volunteering their expertise to come up with a plan, there was no shortage of enterprising spirit when it came to saving lives. Readers will especially appreciate the eight pages of full-color photos, timeline, glossary, notes, and more.

Trapped CHAPTER ONE AUGUST 5–6 2:00 PM
Raul Villegas was driving a truck up a ramp … 1,800 feet underground … when he heard the crack and first saw the dust. Villegas was used to hauling rock out of copper mines in northern Chile, so he had often heard the creaks and moans of the angry earth. He drove on, passing a couple of miners heading down. But as he inched up the ramp he felt a wave hit his truck, “like when there is a dynamite explosion.” Glancing back, it was as if he were looking down the heart of an erupting volcano. He rushed up the endless, sharp turns of the corkscrewing mine and finally made it to the surface. He, at least, was safe. But when he described the sound and dust cloud to his bosses, no one listened.

Someone told Villegas to drive back down, into the mine.

This time he could only go so far. Some 1,200 feet down there was no longer a road, and all around him he could hear the sounds of groaning rock. He turned around and sped up, out of the darkness. Something was very wrong in the San José Mine.
9:00 PM
Six men trained to handle mine emergencies retraced the route of Villegas’s truck, daring to go down to see what had happened, to find whoever was trapped in the mine.
6:00 AM
The exhausted rescue crew returned … alone.

So began one part of a story that captured the attention of the world—bringing together everyone, from experts on outer space to drill bit manufacturers from Pennsylvania, from nutritionists to camera crews. But the real story started millions of years earlier. 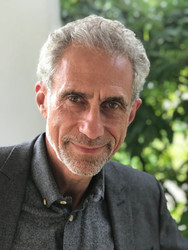 Marc Aronson is the acclaimed author of Trapped: How the World Rescued 33 Miners from 2,000 Feet Below the Chilean Desert, which earned four starred reviews. He is also the author of Rising Water: The Story of the Thai Cave Rescue and Sir Walter Ralegh and the Quest for El Dorado, winner of the ALA’s first Robert F. Sibert Award for nonfiction and the Boston Globe-Horn Book Award. He has won the LMP award for editing and has a PhD in American history from New York University. Marc is a member of the full-time faculty in the graduate program of the Rutgers School of Communication and Information. He lives in Maplewood, New Jersey, with his wife, Marina Budhos, and sons. You can visit him online at MarcAronson.com.

“Aronson marks the one-year anniversary of the collapse of a Chilean copper mine that entombed miners for more than two months with a riveting, in-depth recounting of the events that held the world rapt… Twelve short chapters with photos and diagrams keep the story well-paced as it alternates between above- and below-ground scenes, detailing the heroic efforts of the trapped men, their waiting families, and their rescuers, sometimes on an hour-by-hour basis. Extensive author and source notes, a bibliography, and suggested reading leave plenty for readers to explore.”
--Publishers Weekly, June 13, 2011, *STAR

“Leave it to Aronson…. Photographs, maps, diagrams and a wild range of literary references, from Merlin to Harry Potter, Percy Jackson and Hephaistos, enliven the volume. The author uses these familiar touch points to help tell a complicated story, blending them with such highly technical information as mining machinery to keep his narrative flowing.”

“Masterful storytelling brings to life a story that most think they already know; the 33 miners trapped in a Chilean copper mine for 69 days in 2010…. It was a gripping story then, and Aronson manages to make it even more exciting, more inspirational, and more personal, all by gathering pieces of the puzzle and showing how they fit together. Explanations of how the Earth’s formation and plate tectonics created the copper lines that are so valuable to the world today are a critical beginning. Filling them in with a brief history of metalworking and mining leads readers to the small, out-of-the-way mine in the Atacama Desert region. From there the story becomes as intriguing and suspenseful as any work of fiction; the miners’ struggle to survive below ground is juxtaposed with the frenzy of the work aboveground by the mine officials, the government, and many others working to save the men. Detailed descriptions of the conditions that the miners endured and how they coped paint a vivid picture of just what an ordeal it was. The global response to the disaster was enormous, with organizations, governments, and individuals from Australia, New Zealand, the United States, and Japan offering resources and expertise to find a solution. Ample source notes, black-and-white photographs, websites, and a brief explanation of research methodology round out this must-have for any library.”

“Much more than just a chronicle of the Chilean mining disaster of 2010, Aronson’s well-researched and riveting book gives readers the sense that they’re in the San José copper mine…Peppered with engaging quotes, the text is fluid and attention-grabbing.”

“Aronson zips readers through a whirlwind primer….The succinct text is enhanced by a strong selection of photographs, illustrations, and diagrams, all of which help make the abstract technical issues clear. The remainder of the book is structured in a riveting day-by-day, “above-and-below” account of the rescuers’ struggle to locate survivors and bring them to the surface. Well-chosen quotes and interviews humanize the headlines, and Aronson’s dramatic writing achieves a sense of taut suspense that will captivate young readers. The extensive back matter includes biographical sketches of the miners, as well as a glossary, time line, bibliography, and list of suggested websites. Teachers will welcome this excellent title for classroom discussion, which closes with Aronson’s “How I Wrote This Book,” detailing his research methods.”

“Nonfiction the way it is meant to be—riveting, educational, and entertaining! Aronson not only does a fine job of chronicling both the physical and mental ordeals the Chilean miners faced, but explains how the problem occurred, provides historical background, and details the various participants in the rescue attempts…fascinating reading!.... Give this to students who don’t think they like nonfiction. Those that love history, geology, survival stories, scientific exploration, or even mythology will definitely enjoy it.”

“Aronson delivers a captivating account of the mine collapse…[and] crafts vivid portraits of the miners’ experiences underground, as well as those of the families and countrymen breathlessly awaiting their safe return.”

By Marc Aronson
LIST PRICE $7.99
PRICE MAY VARY BY RETAILER