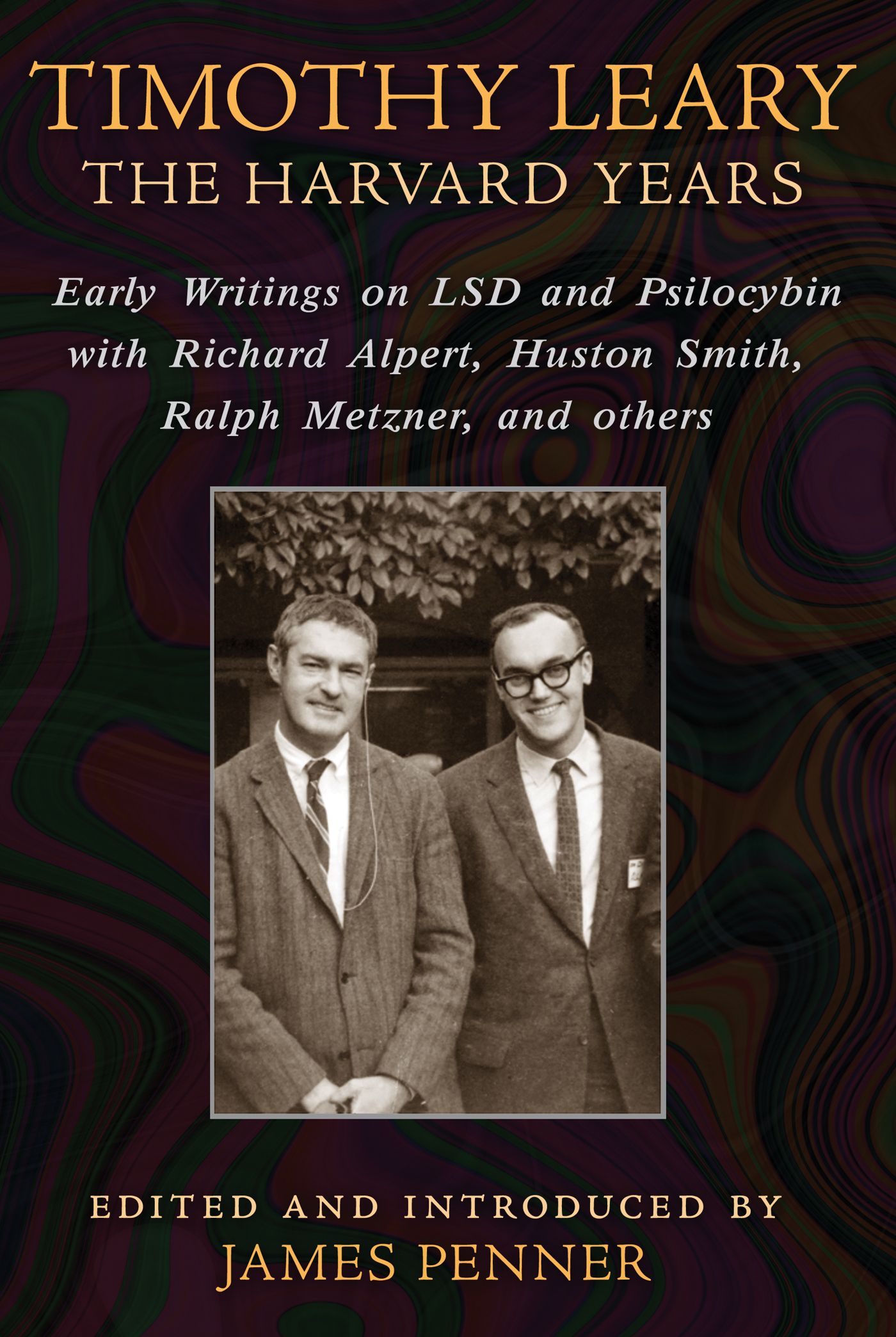 The first collection of Leary’s writings devoted entirely to the research phase of his career, 1960 to 1965

• Presents Leary’s early scientific articles and scholarly essays, including those on the Harvard Psilocybin Project, the Concord Prison Project, and the Good Friday Experiment

On May 27, 1963, Dr. Timothy Leary and Dr. Richard Alpert were dismissed from Harvard University’s Psychology Department--a watershed event marking the moment when psychedelic drugs were publicly demonized and driven underground. Today, little is known about the period in the early 1960s when LSD and psilocybin were not only legal but also actively researched at universities.

Presenting the first collection of Leary’s writings devoted entirely to the research phase of his career, 1960 to 1965, this book offers rare articles from Leary’s time as a professor in Harvard’s Psychology Department, including writings from the Harvard Psilocybin Project, the Concord Prison Project, and the Good Friday Experiment. These essays--coauthored with Richard Alpert, Huston Smith, Ralph Metzner, and other psychedelic research visionaries--explore the nature of creativity and the therapeutic, spiritual, and religious aspects of psilocybin and LSD. Featuring Leary’s scientific articles and a rare account of his therapeutic approach, “On Existential Transaction Theory,” the book also includes Leary’s final essay from his time at Harvard, “The Politics of Consciousness,” as well as controversial articles published shortly after his dismissal.

With an editor’s introduction examining the Harvard Drug Scandal and a critical preface to each essay, this book of seminal early writings by Leary--appearing in unabridged form--shows why he quickly became an articulate spokesperson for consciousness expansion and an iconic figure for the generation that came of age in the 1960s.

This article represents the early phase of Leary’s scientific work with psilocybin. After his initial life-changing experience with magic mushrooms in Mexico, the Harvard psychologist opted to completely change the focus of his research when he returned to Cambridge in the fall of 1960. Leary was convinced that psychedelic drugs were the new frontier for psychology and therapy and began to devise a research agenda that eventually became the Harvard Psilocybin Project.

“Reactions to Psilocybin Administered in a Supportive Environment” is significant because it represents one of the first attempts to move psychedelic research out of the medical environment and into comfortable domestic settings. The emphasis on the mind-set of the user (“set”) and providing a pleasant social environment (“setting”) was crucial. Leary and his research team provided “easy chairs, rugs, and cushions” as well as “a wide range of recorded music, books, paintings and prints.” In many cases, food and drink were offered to make the participants feel comfortable and at ease. Leary and his coauthors discovered that “bad trips” could be virtually eliminated if a supportive environment was provided for the subjects.

In the early 1960s, the “set and setting” theory enlarged the medical and therapeutic parameters of the psychedelic experience. For Leary and other progressive researchers, the science of programming “good trips” was the new paradigm for therapy and behavior-change advocates in the field of psychology.
--James Penner

Reactions to Psilocybin Administered in a Supportive Environment

In recent decades Western civilization has discovered that the ingestion of certain plants can produce astonishing effects upon human consciousness. This information has been held for centuries by certain non-literate tribes who have used the plants in religious and medical procedures. Interest in these substances has been stimulated by the achievement of chemists, most notably Dr. Albert Hofmann, of the Sandoz Laboratories in Basel, Switzerland, who have succeeded in synthesizing the active agents in these plants. Among these the best known are the peyote cactus, from which mescaline is derived, the mushroom psilocybe mexicana, the South American vine yage or caapi, and the seed of ololiuqui, also from Mexico. LSD-25, an ergot derivative, is an artificially synthesized substance with properties and effects similar to these others. The substance used in a recent study is psilocybin, a synthetic of the Mexican “sacred mushroom” introduced to Americans by the mycologist R. Gordon Wasson. The active ingredient, psilocybin, was synthesized by Dr. Hofmann. The physiological action of these drugs is not well understood, although some investigators have suggested that the common biochemical denominator may be the indole nucleus, which is found in most of these drugs and is also in serotonin. Joel Elkes provided an excellent review of the relevant literature.

Both from our own observations and from a survey of the literature one may conclude 1) that these substances are not “addictive,” i.e., although tolerance develops, no case of addiction has ever been reported; 2) they are neither sedatives nor tranquilizers--subjects often report heightened sensitivity to stimuli and excitability and there is no evidence that the drugs have anxiety-reducing effects; 3) they cannot be classed with energizers or stimulants, since although there is increased sensitivity there is usually a reduction in task-oriented energy, and subjects often sit very quietly. Although some investigators (e.g., Beecher) have classified these drugs as “psychotomimetic” (i.e., as inducing “model psychoses”), others have reported that “mystical” or “religious” experiences are produced (e.g., Wasson). It is clear from these disagreements that attempts at strict categorization of the effects of these materials are premature. It is the present hypothesis that the attitude of the experimenter toward the subject matter is an important variable. It influences the expectation or set which he communicates to his subjects, and it determines what kind of setting he provides for the ingestion of the drug; these in turn have marked effects on the nature of the experience.

Most investigators would, however, agree to the statement that these drugs alter consciousness. The purpose of the present research was to investigate some of the ways in which consciousness may be altered. The two major practical difficulties in carrying out such an inquiry are 1) the role of set and suggestion, mentioned above, and 2) the fact that both everyday and scientific language are extremely inadequate for describing altered states of consciousness.

There are several ways of handling the problem of variability in expectation. This study is a preliminary investigation of unusual states which have little or no place in existing social situations. The writers have attempted to impose few preconceptions or rituals of their own on the experience, in order to obtain as wide a variety of reactions as possible. In other words, subjects (Ss) have been allowed to bring their own rules, roles, and games to the experience. In practice this led to a broadly conceived “naturalistic” setting.

To create a relaxed and natural atmosphere, the drug was given in comfortable home surroundings. Because the desired facilities were not available, the living rooms of the homes of the senior investigators were used. It was possible to close off these rooms from the rest of the house and prevent interruptions. All of the rooms were moderate or large in size. Easy chairs, rugs and cushions formed the basic furniture. A wide range of recorded music, books, and paintings or prints was made available. Food and drink were offered. Lighting and other such matters were left to the choice of the experimental group members. The only exceptions are the experimental sessions conducted for prison inmates, which were run in a large separate room in the prison hospital, furnished as comfortably as possible with beds, mattresses, tables, and chairs. Recorded music and some books were also available there.

“A rich and valuable resource. A wonderful glimpse into the thoughts of a fiendishly good psychologist at a crucial juncture in the exploration of psychedelics. Essential reading.”

“Timothy Leary’s pivotal role in 1960s drug culture often led to his being scorned and caricatured by the mass media. James Penner’s superb collection of Leary’s writings from his Harvard years peels away the layers of polemic and myth that surround Leary and enable us to confront his core ideas that helped to shape the counterculture. This is an important book for everyone who wants to understand Leary and the cultural rebellion of the 1960s.”

“This book is a must for any serious student of psychedelics as well as those who would like to understand the full Leary, not just the media parody version that he seemed to become in his post-Harvard years. Here he comes across as a serious scientist, a committed reformer. Penner’s excellent introductions place each paper in its historical context.”

“James Penner’s Timothy Leary: The Harvard Years is not only a brilliant work of scholarship but a powerful and persuasive reexamination of the foundation for some of the most important and exuberant thinking of the 1960s and ’70s. Penner’s own admirable introductions and thorough editorial work allow us to see Leary as a radical and vital intellectual, not just a cultural phenomenon; as a writer unafraid of risks, certainly, but also able to build humane and moving research projects built on science and on hope. This is a major, long-overdue book.”

– James R. Kincaid, professor of English at the University of Pittsburgh and author of Child-Loving, A

“The brilliantly designed experiments that Timothy Leary and his team performed with psilocybin, LSD, and DMT between 1960 and 1963 while at Harvard’s Center for Research in Personality laid the foundation for the revolution we are presently witnessing in psychedelic medicine and science. James Penner has performed a valuable service by gathering and evaluating these essential, difficult-to-find research papers while providing historical context for the academic scandal that erupted in the wake of these experiments.”

– Michael Horowitz, coauthor of Moksha: Aldous Huxley’s Classic Writings on Psychedelics and the

“What a fantastic service James Penner provides with his collection of writings by Timothy Leary and friends in Timothy Leary: The Harvard Years. Leary emerges here . . . as a writer of great relevance today, with an earnest and passionate voice.”

– Sidney Homan, professor of English at the University of Florida and actor, director, and author

“This is a great book! I’ve always been curious about Leary’s earlier, more scholarly work, which has real substance to it. I never thought about it as a focus for a book, but it’s blindingly obvious now that James Penner has done it.”

– Marcus Boon, author of The Road of Excess: A History of Writers on Drugs and professor of English at

“...the theories and writings contained in this book are a very worthy read, and challenging for all the right reasons.”