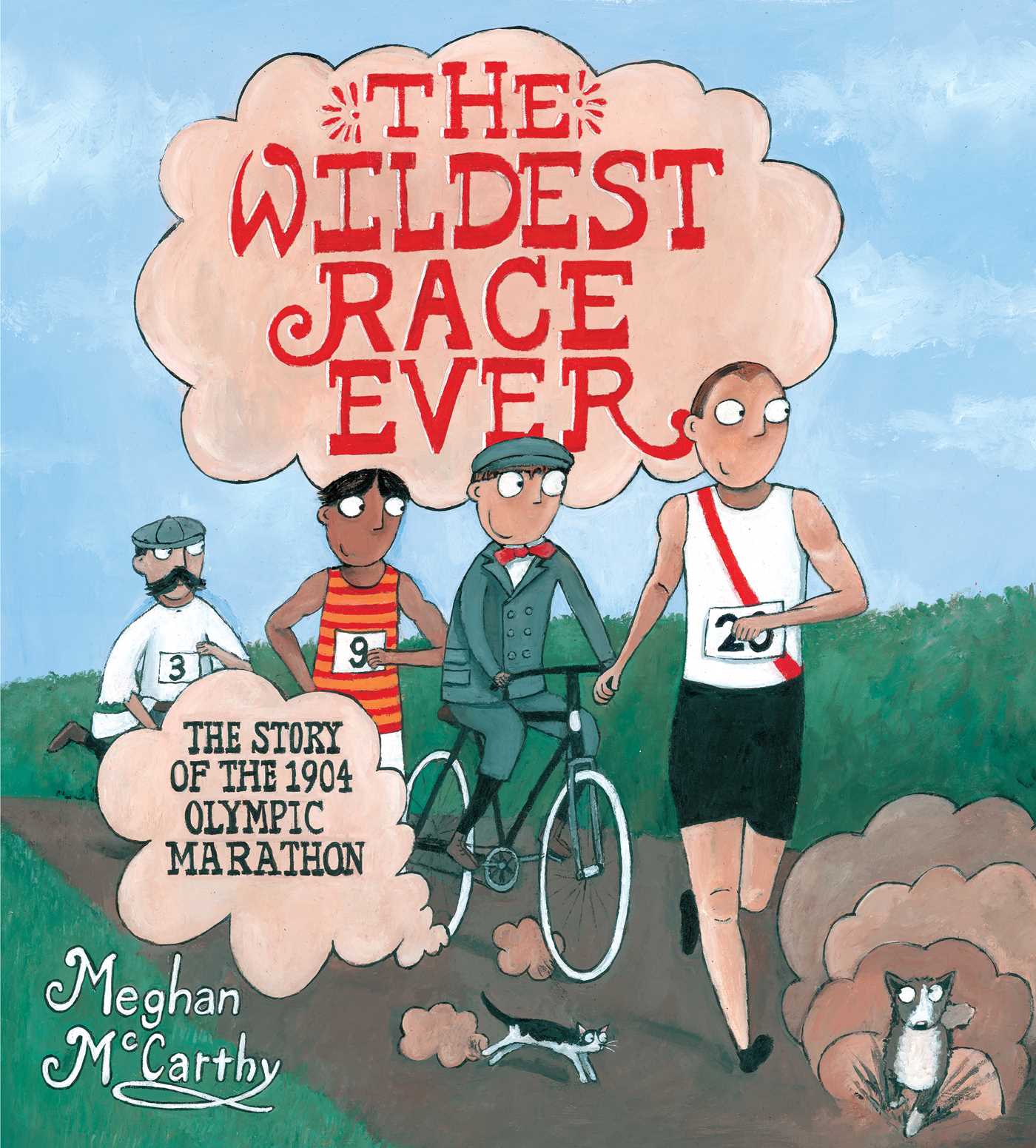 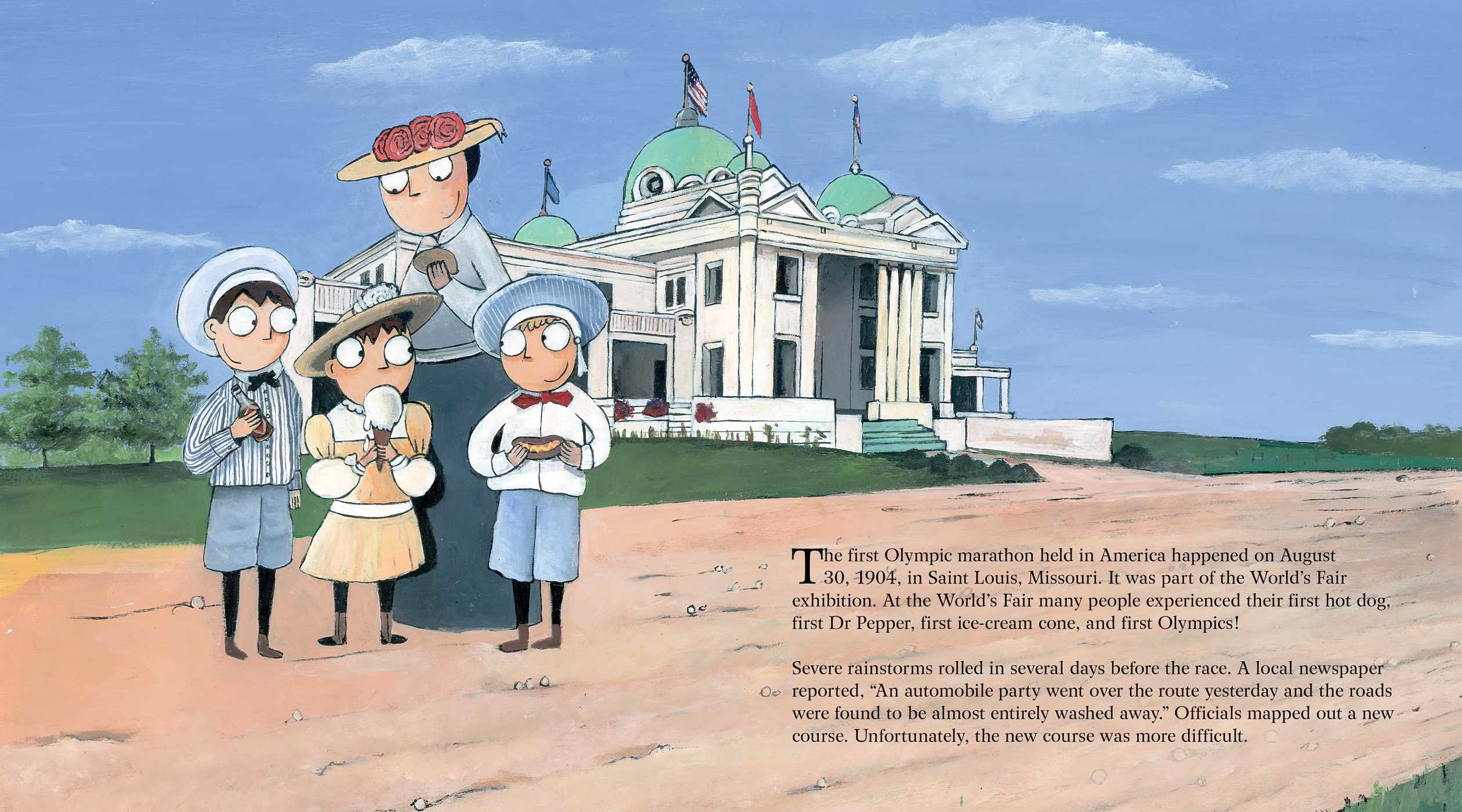 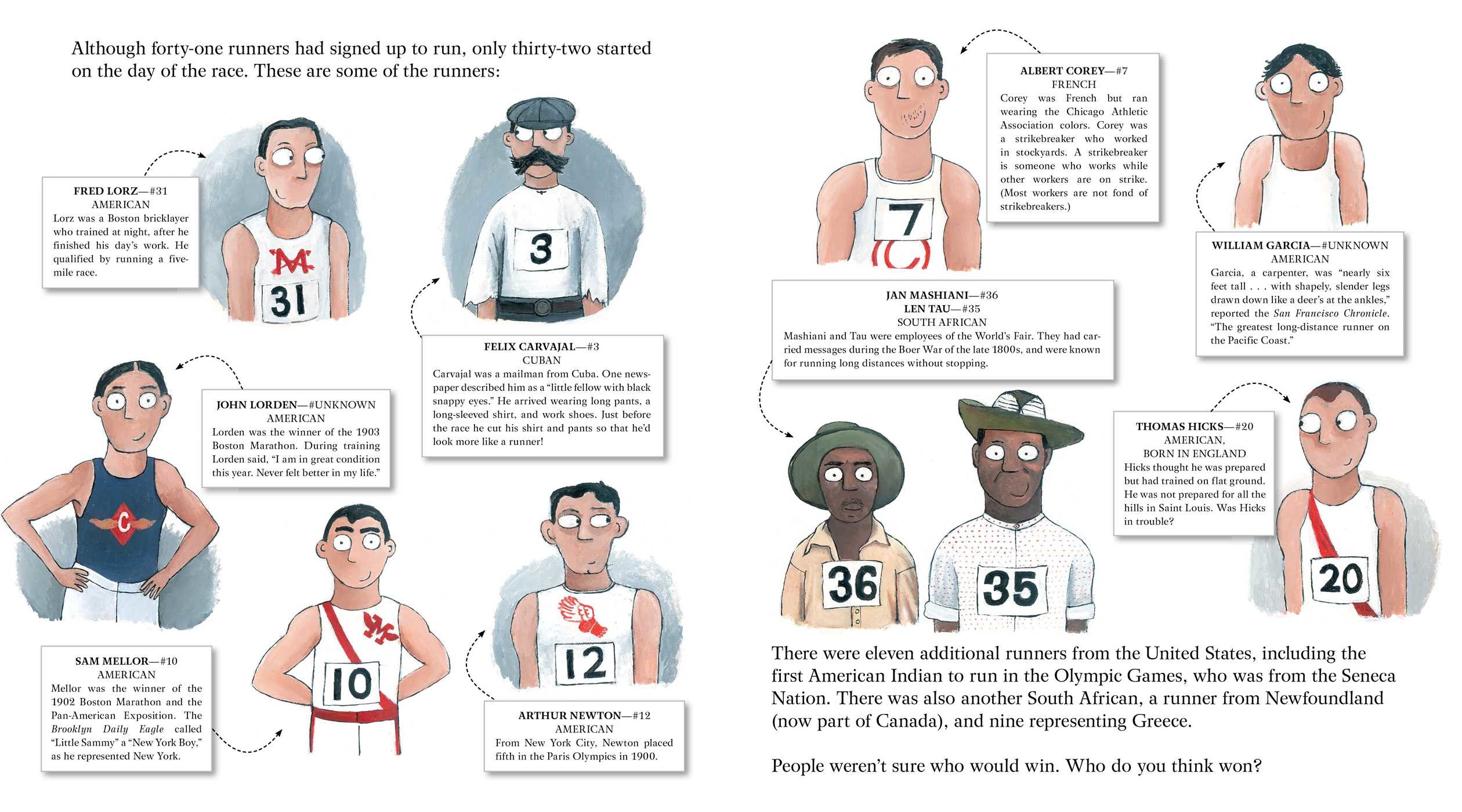 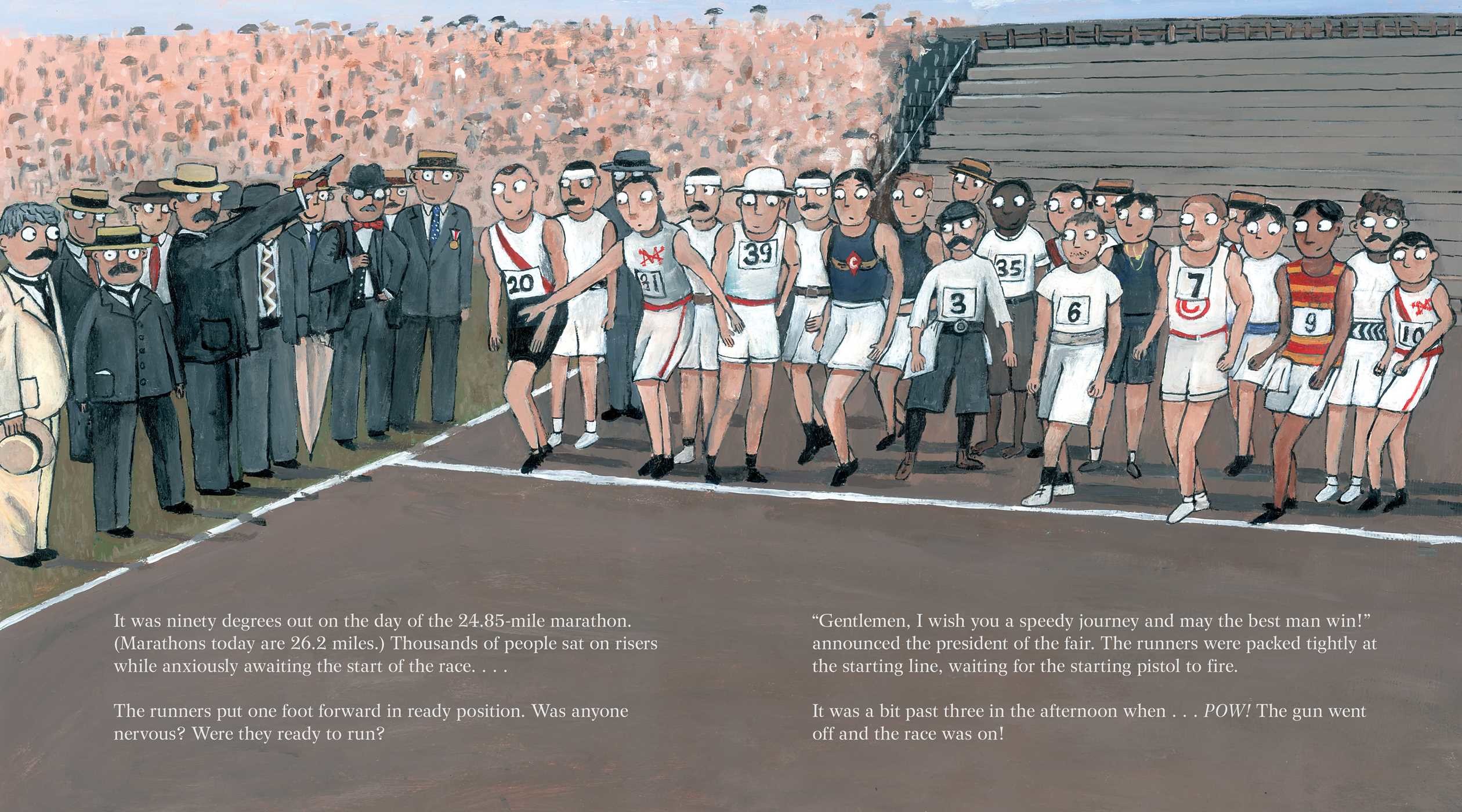 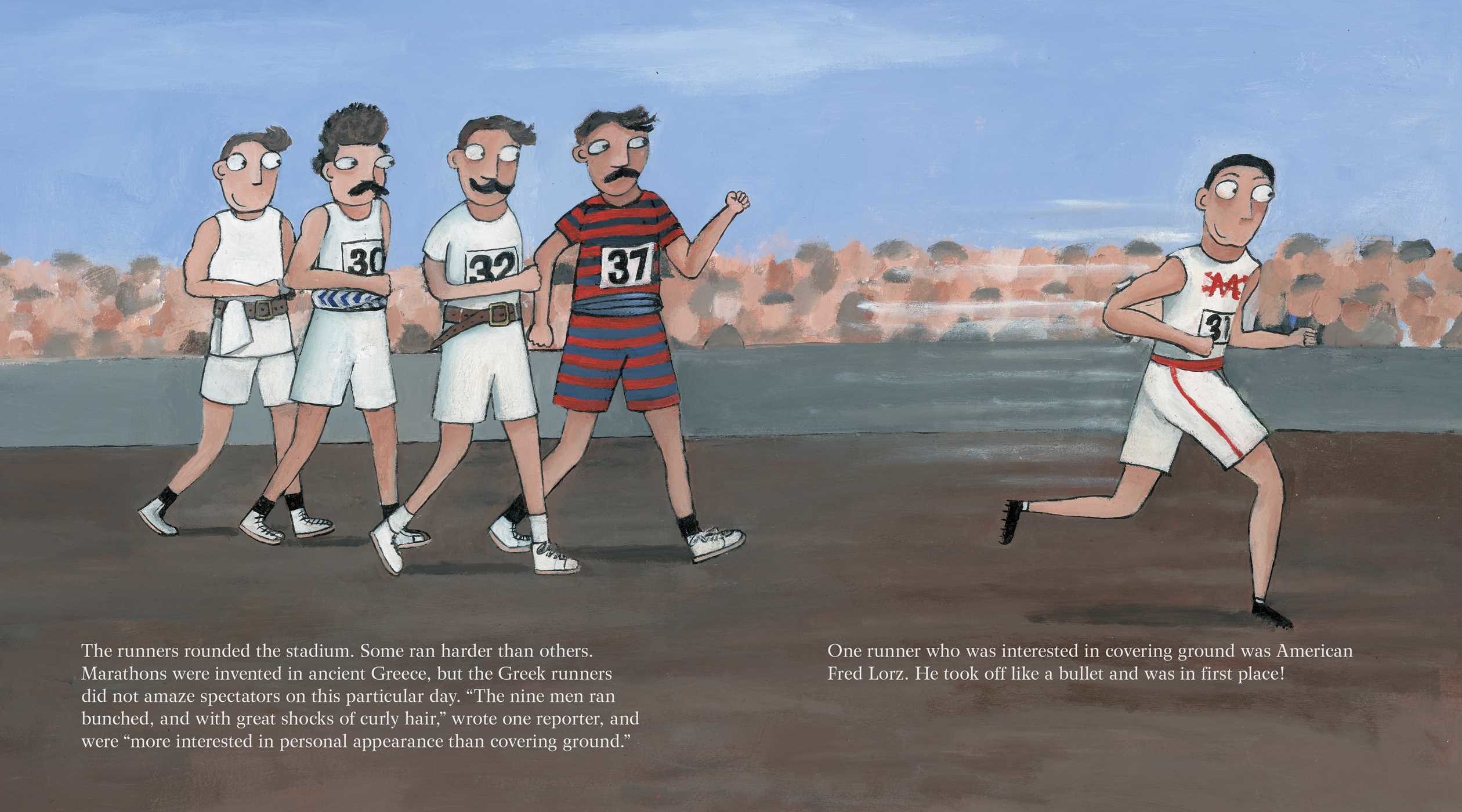 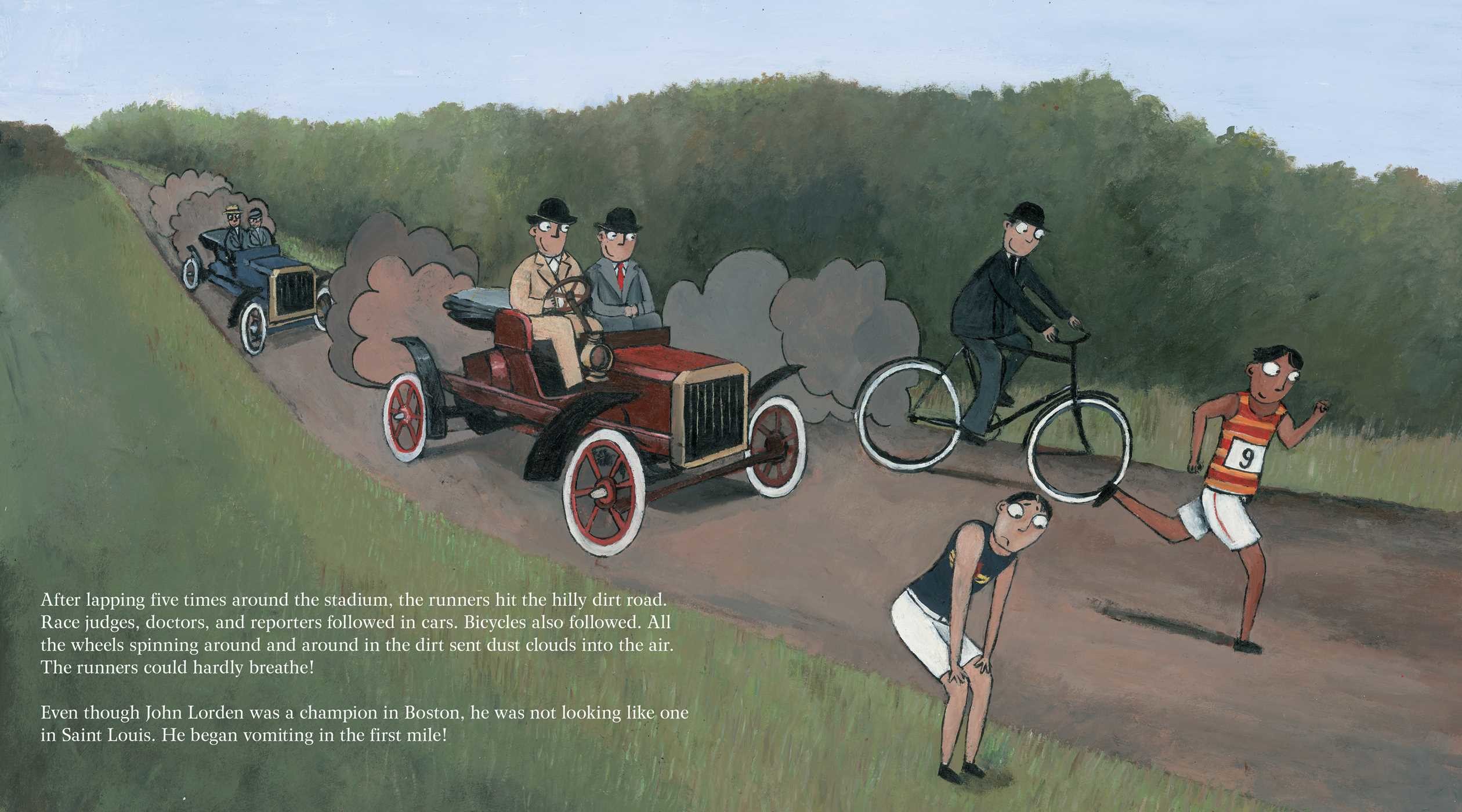 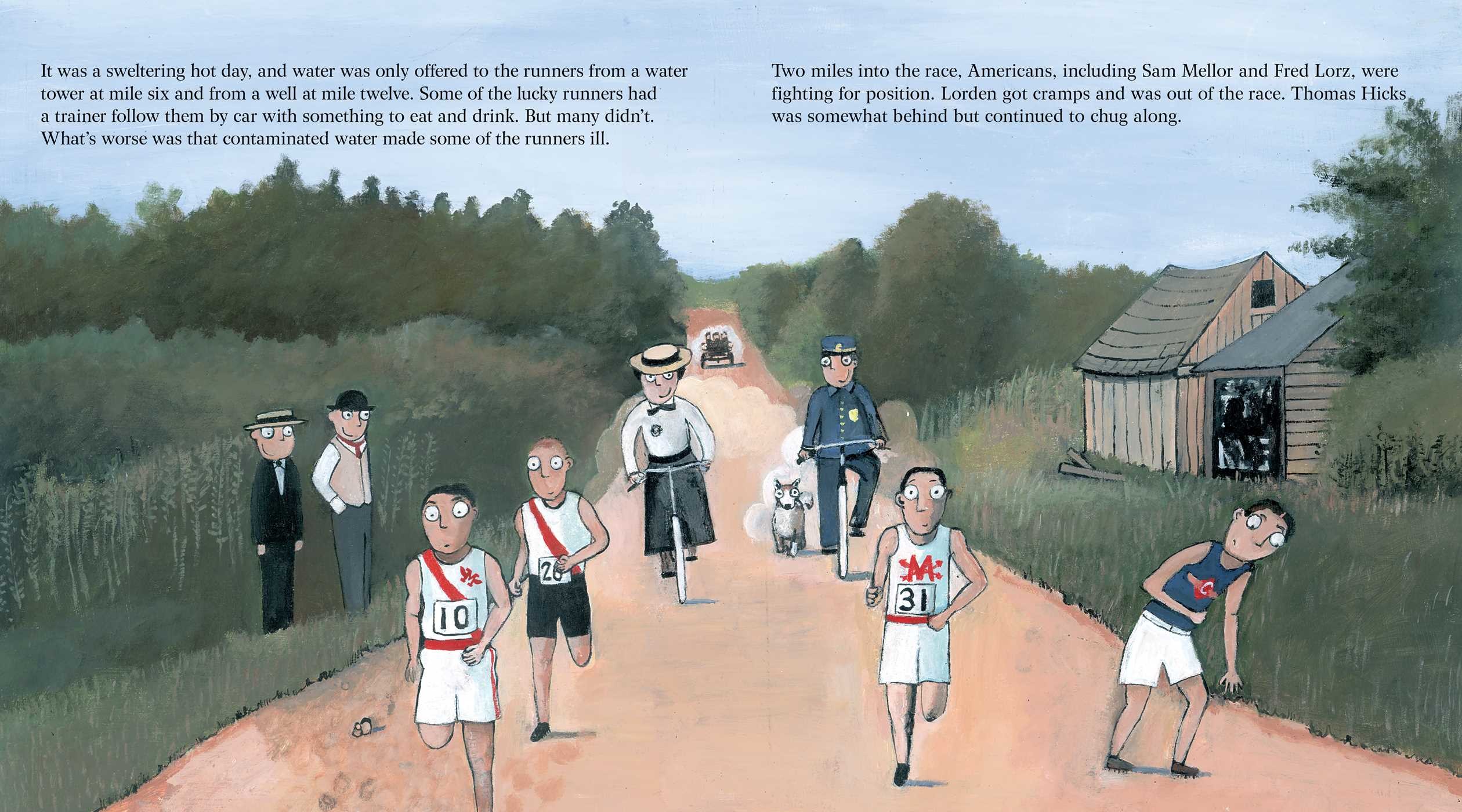 The Wildest Race Ever

The Story of the 1904 Olympic Marathon

From Megan McCarthy the award-winning author of Pop! and Earmuffs for Everyone comes the quirky, fascinating, and inspiring story of perseverance and the importance of sportsmanship set at the 1904 St. Louis Olympic Marathon.

It was 1904 and St. Louis was proud to host the World’s Fair and America’s First Olympics. Hundreds of thousands of people came by car, by train, by boat. Part of the Olympics was a wild, wacky marathon. Forty-two racers registered, thirty-two showed up, and of the three racers vying for the finish line: on drove part way, one was helped by his trainers over the line, and one was a postman who travelled from Cuba and ran in street clothes that he cut off to look like shorts. How they ran and who won is a story of twists and turns that only wouldn’t be believed if it weren’t true! And it is! Find out who won in this wacky and well-researched picture book all about the historic Olympic Marathon of 1904. 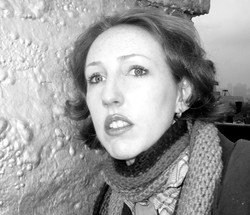 Meghan McCarthy is the award-winning author and illustrator of many books for children, including Earmuffs for Everyone!: How Chester Greenwood Became Known as the Inventor of Earmuffs; Daredevil: The Daring Life of Betty Skelton; Pop!: The Invention of Bubble Gum; City Hawk: The Story of Pale Male; Seabiscuit the Wonder Horse; All That Trash; and Action! A graduate of the Rhode Island School of Design, she lives in Brooklyn, New York. Visit her at Meghan-McCarthy.com.

Meghan McCarthy is the award-winning author and illustrator of many books for children, including Earmuffs for Everyone!: How Chester Greenwood Became Known as the Inventor of Earmuffs; Daredevil: The Daring Life of Betty Skelton; Pop!: The Invention of Bubble Gum; City Hawk: The Story of Pale Male; Seabiscuit the Wonder Horse; All That Trash; and Action! A graduate of the Rhode Island School of Design, she lives in Brooklyn, New York. Visit her at Meghan-McCarthy.com.

With her signature narrative zeal and goggle-eyed characters,McCarthy takes readers to the first Olympic marathon in America, held duringthe St. Louis World’s Fair. The vehicles trailing the pack kicked up dust thatchoked and blinded the runners. Cuban Felix Carvajal couldn’t resist stoppingfor fresh fruit or practicing his English with cheering onlookers. SouthAfrican Len Tau “was chased a mile off course by an angry dog.” American FredLorz, first over the finish line, probably rode most of the course in a car.And Thomas Hicks, another American and the eventual official winner, was givena concoction of egg white and strychnine en route. Readers who have grown upwith highly orchestrated sports events on TV may be surprised to learn just howslapdash, hazardous, and idiosyncratic early competition could be. But thestory requires a marathoner’s concentration to keep track of its 10 maincharacters, and the subject matter doesn’t offer McCarthy the kind of meatyambiguity that have made her previous works like Earmuffs for Everyone!so fun and compelling.

McCarthy presents a look at the first Olympic marathon held in America. This 24.85-mile race took place in 1904 and was part of the St. Louis World’s Fair. The 32 runners who endured the 90-degree heat were offered water only at mile six and mile 12. The track was dirt, and cars and bicycles churned up so much dust that the athletes could hardly breathe.The illustrations are rendered in colorful acrylics, and McCarthy portrays her cartoonlike characters with bug eyes with tiny black pinpricks for pupils. The tone is lighthearted and humorous; for instance, McCarthy describes the antics of runner Felix Carvajal, a mailman from Cuba, who wore trousers and work shoes, pausing to chat with passersby to practice his English and resting in an apple orchard when he got hungry. End papers are comprised of photographs of World’s Fair postcards of the time period, which enhances the historical flair. VERDICT Children will enjoy hearing about this unusual race and comparing the differences between this competition and marathons today.

Thewildest race? That’s a pretty big claim, but as McCarthy retells the tale, itjust might be true. The year was 1904 (long before marathons were anevery-weekend event), the place was the World’s Fair in St. Louis (that of hotdog and ice cream cone fame), the route was awful (rain had turned roads tomud, which then dried to dust), the weather was smothering (August heat atthree in the afternoon), the runners were, well, quite a crew, and theirtrainers were, well, nothing short of ignorant by today’s standards. McCarthyintroduces ten contestants in thumbnail bios that give an indication of therange of experience on the track that day—from Cuban Felix Carvajal, whoarrived in long sleeves and street shoes, to Fred Lorz, a bricklayer whotrained after work, to Ian Mashiani and Len Tau, South African messengersduring the Boer Wars who were now working at the Fair. Many runners droppedlike flies, some engulfed in clouds of dust that impaired their vision andbreathing, some from exhaustion, some from dehydration as their trainersrefused to give them water; one water-deprived runner was given strychnine byhis trainer in an early version of performance-enhancing drugs. Others didsplendidly, stop- ping to chat with fans along the route, or sprinting acrossthe finish line with the expressed wish that the course had been longer.McCarthy’s signature google-eyed cartoon cast neatly underscores theabsurdities of the race, and her early invitation for readers to guess thewinner gives them some stake in the game. A lively endnote elaborates on someof the more vibrant runners—and touches on the strychnine issue—and abibliography directs kids to original newspaper reports.

What an accurate title! The first Olympic marathon run in America—as part of the St. Louis World’s Fair in 1904—involved everything from blistering heat to contaminated water to strychnine poisoning. And that’s to say nothing of the individual participants. McCarthy begins by introducing some of the runners, including Félix Carvajal, a Cuban mailman; Fred Lorz, a Boston bricklayer; and Jan Mashiani and Len Tau, black South Africans who were employed at the fair. Kids familiar with marathon races will see little resembling those well-orchestrated events here. Automobiles follow the runners, stirring up dirt and dust that affects the runners’ breathing. Vomiting and stomach cramps begin almost immediately, perhaps because runners were given unclean water. Carvajal decides to take an apple break under a tree. And a leading runner is given poison by his trainers. The comic effect is heightened by the art: google-eyed characters who look as askance at the goings-on as readers will. A long author’s note gives background and more of this strange-but-true (and captivating) story. — Ilene Cooper

The year 1904 saw the running of the first Olympic marathon on American soil, taking place in St. Louis during the World’s Fair. How fitting that this particular marathon was a race for the ages, with cheating runners (one caught a ride in a car), contaminated water, pilfered peaches, and strychnine poisoning. All this makes great fodder for McCarthy (Daredevil: The Daring Life of Betty Skelton, rev. 5/13, and many others), who mixes the zany events into another appealing informational picture book. The colorful cast of characters—most of whom feature in a montage near the book’s start—are rendered in McCarthy’s recognizable cartoonlike acrylic illustrations. As the race heats up, McCarthy picks up the pace suitably, following myriad subplots—one athlete being chased off course “by an angry dog,” another stopping to pig out at an apple orchard, and a medic driving cinematically over an embankment (complete with hats flying and chickens squawking). While McCarthy’s writing can get a tad too chatty—she peppers the text with exclamation points whose surfeit becomes monotonous—it’s nonetheless another winning title for young readers.

This nonfiction book is about the first Olympic marathon, held on August 30, 1904 in St. Louis, Missouri. The text includes quotes from people and publications of the time, as well as full-color illustrations. The story follows a few runners in the marathon and how they did during the race. When one runner gets cramps, they climb into one of the cars following the racers and rejoin the race later on. Runners were not given much water because it was thought that it was bad for them to drink during a race. Facts are presented with explanations and graphics that help children picture the action and stay engaged in the book. The font is easy to read and the sentences finish on one page. The book ends with information about the runners, including quotations, that provides background information for older readers. Bibliography. Website.

The Wildest Race Ever

The Story of the 1904 Olympic Marathon