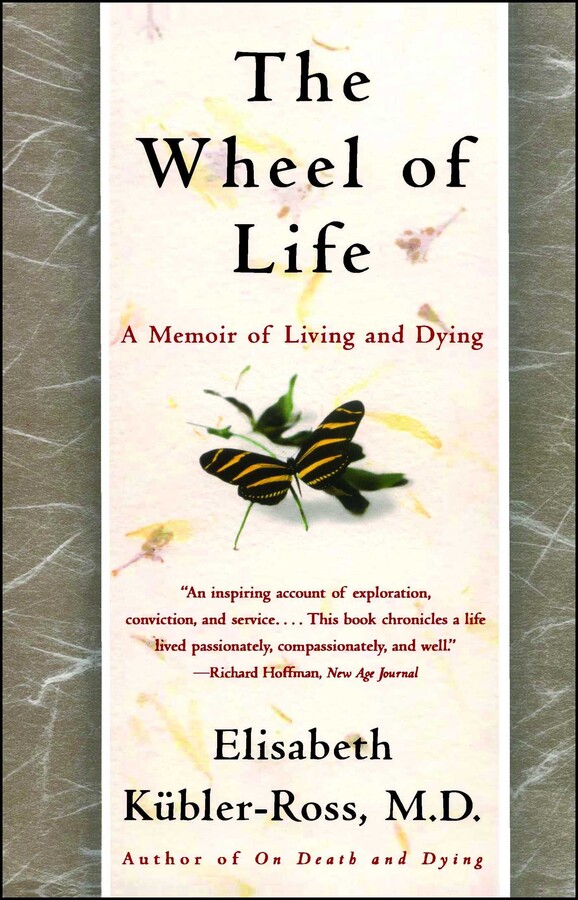 The Wheel of Life

A Memoir of Living and Dying

On Life and Living
Elisabeth Kübler-Ross, M.D., is the woman who has transformed the way the world thinks about death and dying. Beginning with the groundbreaking publication of the classic psychological study On Death and Dying and continuing through her many books and her years working with terminally ill children, AIDS patients, and the elderly, Kübler-Ross has brought comfort and understanding to millions coping with their own deaths or the deaths of loved ones. Now, at age seventy-one facing her own death, this world-renowned healer tells the story of her extraordinary life. Having taught the world how to die well, she now offers a lesson on how to live well. Her story is an adventure of the heart -- powerful, controversial, inspirational -- a fitting legacy of a powerful life.

Maybe this will help. For years I have been stalked by a bad reputation. Actually I have been pursued by people who regard me as the Death and Dying Lady. They believe that having spent more than three decades in research on death and life after death qualifies me as an expert on the subject. I think they miss the point.

The only incontrovertible fact of my work is the importance of life.

I always say that death can be one of the greatest experiences ever. If you live each day of your life right, then you have nothing to fear.

Maybe this, what is certain to be my final book, will clear that up. It may also raise a few new questions and perhaps even provide the answers.

From where I sit today in the flower-filled living room of my home in Scottsdale, Arizona, the past seventy years of my life look extraordinary. As a little girl raised in Switzerland, I could never, not in my wildest dreams -- and they were pretty wild -- have predicted one day winding up the world-famous author of On Death and Dying, a book whose exploration of life's final passage threw me into the center of a medical and theological controversy. Nor could I have imagined that afterward I would spend the rest of my life explaining that death does not exist.

According to my parents, I was supposed to have been a nice, churchgoing Swiss housewife. Instead I ended up an opinionated psychiatrist, author and lecturer in the American Southwest, who communicates with spirits from a world that I believe is far more loving and glorious than our own. I think modern medicine has become like a prophet offering a life free of pain. It is nonsense. The only thing I know that truly heals people is unconditional love.

Some of my views are unconventional. For instance, throughout the past few years I suffered a half dozen strokes, including a minor one right after Christmas 1996. My doctors warned, and then begged me to give up smoking, coffee and chocolates. But I still indulge in these tiny pleasures. Why not? It is my life.

That is how I have always lived. If I am opinionated and independent, if I am stuck in my ways, if I am a little off-center, so what? That is me.

By themselves, the pieces do not seem to fit together.

But my experiences have taught me that there are no accidents in life.

The things that happened to me had to happen.

I was destined to work with dying patients. I had no choice when I encountered my first AIDS patient. I felt called to travel some 250,000 miles each year to hold workshops that helped people cope with the most painful aspects of life, death and the transition between the two. Later in my life, I was compelled to buy a 300-acre farm in rural Virginia, where I created my own healing center and made plans to adopt AIDS-infected babies, and, though it is still painful to admit, I see that I was destined to be driven out of that idyllic place.

After announcing my intention of adopting AIDS-infected babies in 1985, I became the most despised person in the whole Shenandoah Valley, and even though I soon abandoned my plans, there was a group of men who did everything in their power short of killing me to get me to leave. They fired bullets through my windows and shot at my animals. They sent the kind of messages that made life in that gorgeous spot unpleasant and dangerous. But that was my home and I stubbornly refused to pack up.

I had moved to the farm in Head Waters, Virginia, ten years earlier. The farm embodied all my dreams and I poured all the money I earned from publishing and lectures into making it a reality. I built my house, a neighboring cabin and a farmhouse. I constructed a healing center where I held workshops, allowing me to cut down on my hectic travel schedule. I was planning to adopt AIDS-infected babies, who would enjoy however many days remained of their lives in the splendor of the outdoors.

The simple life on the farm was everything to me. Nothing was more relaxing after a long plane flight than to reach the winding driveway that led up to my house. The quiet of the night was more soothing than a sleeping pill. In the morning, I awoke to a symphony of talking cows, horses, chickens, pigs, donkeys, Ilamas...the whole noisy menagerie, welcoming me home. The fields rolled out as far as I could see, glistening with fresh dew. Ancient trees offered their silent wisdom.

There was real work to be done. My hands got dirty. They touched the earth, the water, the sun. They worked with the material of life.

My soul was there.

It burned down to the ground and was a total loss. All my papers were destroyed. Everything I owned turned to ash.

I was hurrying through the airport in Baltimore, trying to catch a plane home, when I got the news that it was ablaze. The friend who told me begged me not to go home, not yet. But my whole life I had been told not to become a doctor, not to talk with dying patients, not to start an AIDS hospice in prison, and each time I had stubbornly done what felt right rather than what was expected. This time was no different.

Everyone goes through hardship in life. The more you go through, the more you learn and grow.

The plane flight zoomed by. Soon I was in the backseat of a friend's car, speeding along the dark country roads. It was nearly midnight. From a distance of a few miles away, I spotted the first signs of smoke and flames. They stood out against a perfectly black sky. I could tell it was a big fire. Close up, the house, or what remained of it, was barely visible through the flames. I compared the scene to standing in the midst of hell. The firemen said they had never seen anything like it. The intense heat kept them at bay all night and through the morning.

Sometime late that first night I sought shelter in the nearby farmhouse, which had facilities for guests. I made myself a cup of coffee, lit a cigarette and considered the tremendous personal loss inside the raging furnace that was once my home. It was devastating, staggering, beyond comprehension. The list included diaries my father had kept of my childhood, my personal papers and journals, some 20,000 case histories pertaining to my research into life after death, my collection of Native American art, photos and clothing...everything.

For twenty-four hours I was in shock. I did not know how to react, whether to cry, scream, shake my fists at God or just gawk at the iron-fisted intrusion of fate.

Adversity only makes you stronger.

People always ask me what death is like. I tell them it is glorious. It is the easiest thing they will ever do.

Life is hard. Life is a struggle.

Life is like going to school. You are given many lessons. The more you learn, the harder the lessons get.

This was one of those times, one of those lessons. Since there was no use denying the loss, I accepted it. What else could I do? Anyway, it was just a bunch of stuff, and no matter how important or sentimental the meaning, nothing compared with the value of life. I was unharmed. My two grown children, Kenneth and Barbara, were alive. Some jerks might have succeeded in burning down my house and everything inside, but they were not able to destroy me.

When you learn your lessons, the pain goes away.

This life of mine, which began halfway around the world, has been many things -- but never easy. That is a fact, not a complaint. I have learned there is no joy without hardship. There is no pleasure without pain. Would we know the comfort of peace without the distress of war? If not for AIDS, would we notice our humanity is in jeopardy? If not for death, would we appreciate life? If not for hate, would we know the ultimate goal is love?

As I am fond of saying: "Should you shield the canyons from the windstorms, you would never see the beauty of their carvings."

I admit that October night three years ago was one of those times when the beauty was hard to find. But during the course of my life, I had stood at similiar crossroads, searching the horizon for something nearly impossible to see. At those moments you can either hold on to negativity and look for blame, or you can choose to heal and keep on loving. Since I believe our only purpose for existing is to grow, I had no problem making a choice.

So a few days after the fire, I drove in to town, bought a change of clothes and got set for whatever was going to happen next.

In a way, that is the story of my life. 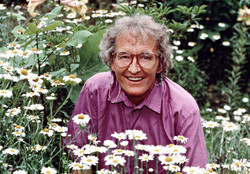 Elisabeth Kübler-Ross, MD, [1926–2004] was a Swiss-born psychiatrist, humanitarian, and co-founder of the hospice movement around the world. She was also the author of the groundbreaking book On Death and Dying, which first discussed The Five Stages of Grief. Elisabeth authored twenty-four books in thirty-six languages and brought comfort to millions of people coping with their own deaths or the death of a loved one. Her greatest professional legacy includes teaching the practice of humane care for the dying and the importance of sharing unconditional love. Her work continues by the efforts of hundreds of organizations around the world, including The Elisabeth Kübler-Ross Foundation: EKRFoundation.org.

Bill Williams The Hartford Courant This absorbing account of her life shows a strong-willed woman willing to challenge authority and convention at every turn. Part of the book's charm is that Kübler-Ross is a marvelous storyteller.

The Wheel of Life

A Memoir of Living and Dying