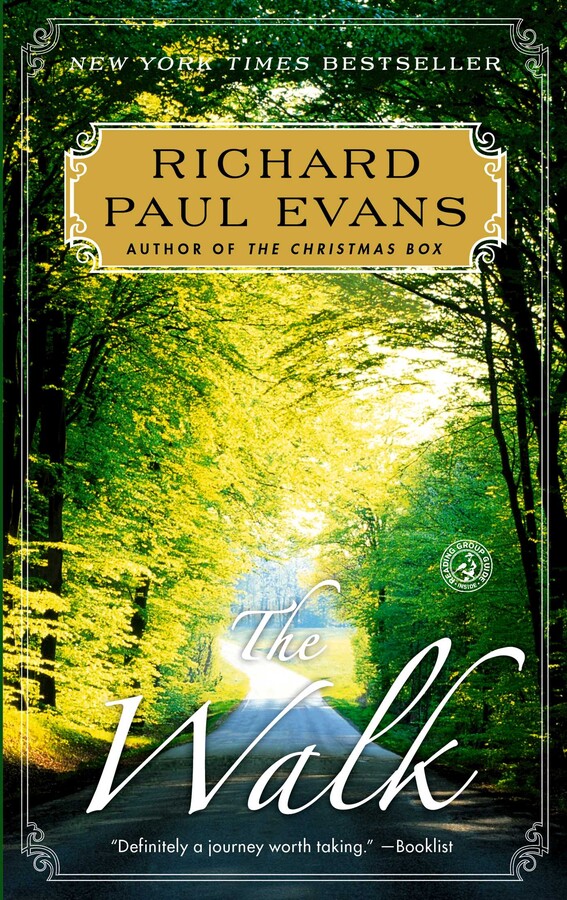 The first book in the inspiring New York Times bestselling series about an executive who loses everything he holds dear and embarks on a walk across America that changes his life forever.

What would you do if you lost everything—your job, your home, and the love of your life—all at the same time? When it happens to Seattle ad executive Alan Christoffersen, he’s tempted by his darkest thoughts. Instead, he decides to take a walk. But not any ordinary walk. Taking with him only the barest of essentials, Alan leaves behind all that he’s known and heads for the farthest point on his map: Key West, Florida. The people he encounters along the way, and the lessons they share with him, will save his life—and inspire yours.

A life-changing journey, both physical and spiritual, The Walk is the first of an unforgettable bestselling series of books about one man’s search for hope.

By clicking 'Sign me up' I acknowledge that I have read and agree to the privacy policy and terms of use. Free ebook offer available to NEW US subscribers only. Offer redeemable at Simon & Schuster's ebook fulfillment partner. Must redeem within 90 days. See full terms and conditions and this month's choices.
This reading group guide for The Walk includes an introduction, discussion questions, ideas for enhancing your book club, and a Q&A with author Richard Paul Evans. The suggested questions are intended to help your reading group find new and interesting angles and topics for your discussion. We hope that these ideas will enrich your conversation and increase your enjoyment of the book.

Life is good for Alan Christoffersen. He has a beautiful wife, a great house and is head of a growing company, but all at once, Alan’s life changes permanently and irrevocably – he loses his family and job. Now completely on this own, Alan must figure out how to pick up the pieces and move on. He starts with a simple step, quite literally: he decides to go for a walk across America.

1.      The author writes in the style of a diary. Do you enjoy this style of writing? Didit help you relate to the characters? Did you think it made the story stronger or weaker?

2.      At the outset, Alan’s life seems to be perfect. However, in the prologue he makes it clear things don’t work out as he imagined. How did this admission and foreshadowing affect your reading?

3.      At the start of chapter three the author tells us “procrastination is the thief of dreams” (31). Is this a true statement? How does that philosophy relate to Alan’s life? Is it true in your life?

4.      After McKale’s accident, Alan is so preoccupied with her that his company disappears under his feet. What was his reaction to the news? How do you think you would have handled these major events all at once?

5.      Alan became overwhelmed by his grief, yet he never lost his love for McKale. What does that say about him as a person and husband? How did those feelings help him through his pain?

6.      Alan says he and McKalewere each other’s only friends. Did this focus only on each other end up having a detrimental effect or positive one? Why?

7.      Alan’s father also lost his wife at an early age, and so had been through a similar situation. How did he support his son during the ordeal? Was it helpful?

8.      The Christoffersens were terrible at handling money, and quickly had all their belongings repossessed. How does this metaphor relate to what else Alan had lost?

9.      Before almost killing himself, Alan heard a voice that said, “Life is not yours to take” (175). Who, if anyone, was speaking to him, and what did that message mean?

10.  Alan wrote in his diary he believeddeep in our hearts we all want to walk free. Do you think that’s true? Would people really prefer to be unchained from their belongings?

11.  “A good walk in the woods is as effective as psychotherapy” (198). What is Alan trying to gain from his walk? A chance to get away from his problems or a long-term therapy session or both?

12.  At what point did you begin to see a change in Alan? Who do you feel had the most profound effect on him during his walk?

14.  Where do you see the story headed? What other trials do you expect Alan to encounter on his way to Key West?

1.      Alan begins the story as a big shot ad executive. Create your own advertisement for The Walk and share it with the group. Explain how you created your design.

2.      Alan spends much of the novel walking and thinking. Go for a walk with your group as you discuss the story.

3.      Do you like to hike? Alan also became proficient in setting up tents and living off the land. Take a weekend trip to the woods or the mountains with your group to take in nature.

4.      More than once Alan stopped in a restaurant claiming the best milkshakes in the world. What does it take to make the perfect shake? Create some with your group and see who can make the tastiest version.

A Conversation with Richard Paul Evans

1.      What message are you trying to share with this novel?

I believe that we were meant to live as social creatures, to reach out and bless each other’s lives.   To paraphrase what Dickens wrote, “…it’s required of all men to walk abroad among humanity.”

2.      Why did you decide to write in diary form, rather than another styles?

I began writing in diary form nearly 15 years ago with my second novel Timepiece.  I enjoy doing it and it makes for a very readable, interesting book.

3.      There is a spiritual side to the novel as Alan wrestles with his feelings toward God. Why did you choose to add this aspect to the story?

It is my experience that almost everyone who suffers a major loss, whether a professed believer in God or not, wonders about God and struggles with either blame or confusion.  It was an issue I wanted to address head-on, especially with Ally, the waitress, who asks: why do we blame God for the bad things but not the good?

4.      Are you like Alan, who said that everyone has a deep desire to leave everything behind and just keep moving? Or do you prefer to stay close to home?

Seeing I’ve been in 13 cities in the last three weeks I suppose I’m more like Alan than I want to believe.  But as I get older I long to just be home.

5.      Why did you choose to call out certain parts of Alan’s diary to start each chapter?

It’s a style I’ve used before in my writing and one that is very popular with my readers.  As I write the focus is on creating a story that flows quickly, so the reader becomes lost in the experience.  More prosaic passages can stop that flow. I discovered by pulling them out and putting them at the beginning of a chapter heading, where the reader is already transitioning, makes for a more enjoyable read.

6.      You write a very descriptive narrative about Washington State where Alan travels, and seem to have a lot of knowledge of the area. Have you traveled there before?

My daughter, Jenna, and I rented a car and drove the route, carefully observing what he would see, where he would stop and what he would eat.  I initially tried to write this story in my den and realized it was impossible to do without being there.  This means that over the next four years my daughter Jenna and I will travel across America together, something I’m very excited about.

7.      Alan contemplates an important question on his walk that is good for you as well: Who really does have the greatest milkshakes?

I honestly don’t know.  I’m diabetic so I didn’t try any. My daughter liked Zeke’s.

8.      The Walk is the first book in your planned series. What other adventures are in store for Alan on his trip?

You’ll have to wait and see.

9.      You’ve written a number of best sellers. What is it about writing that you enjoy? What is your process in creating stories that people enjoy so much?

I suppose I have an active imagination and writing allows me to live it out.  I truly feel as if I’m a conduit for these stories and there are times that I don’t even know what I’m writing until it’s poured through me and I can confront it on the page.  People are looking for inspiration and my books are sometimes the vehicles of what people are looking for. It’s my job, however, to make it entertaining.

A love story called Promise Me, due out Fall 2010.

“Richard Paul Evans has proven to be one of America’s most precious gifts . . . an inspirational writer who has the ability to read our very souls and heal broken hearts. . . . His books are the ones you can’t wait to finish, but when you do, you wish you hadn’t. I suggest readers accompany Evans on The Walk.”

“Hoda and I both thoroughly enjoyed this book . . . The Walk is beautifully written.”