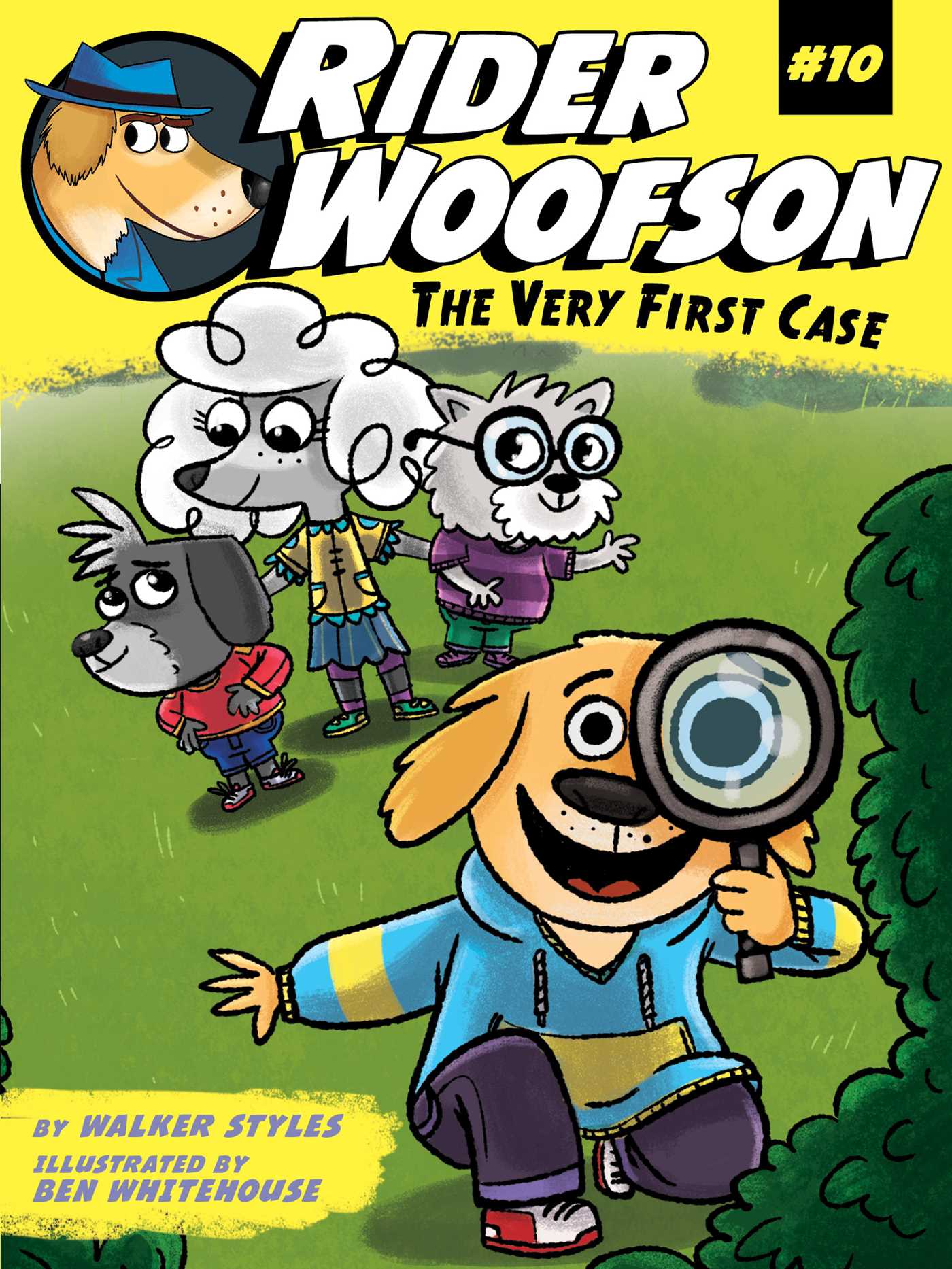 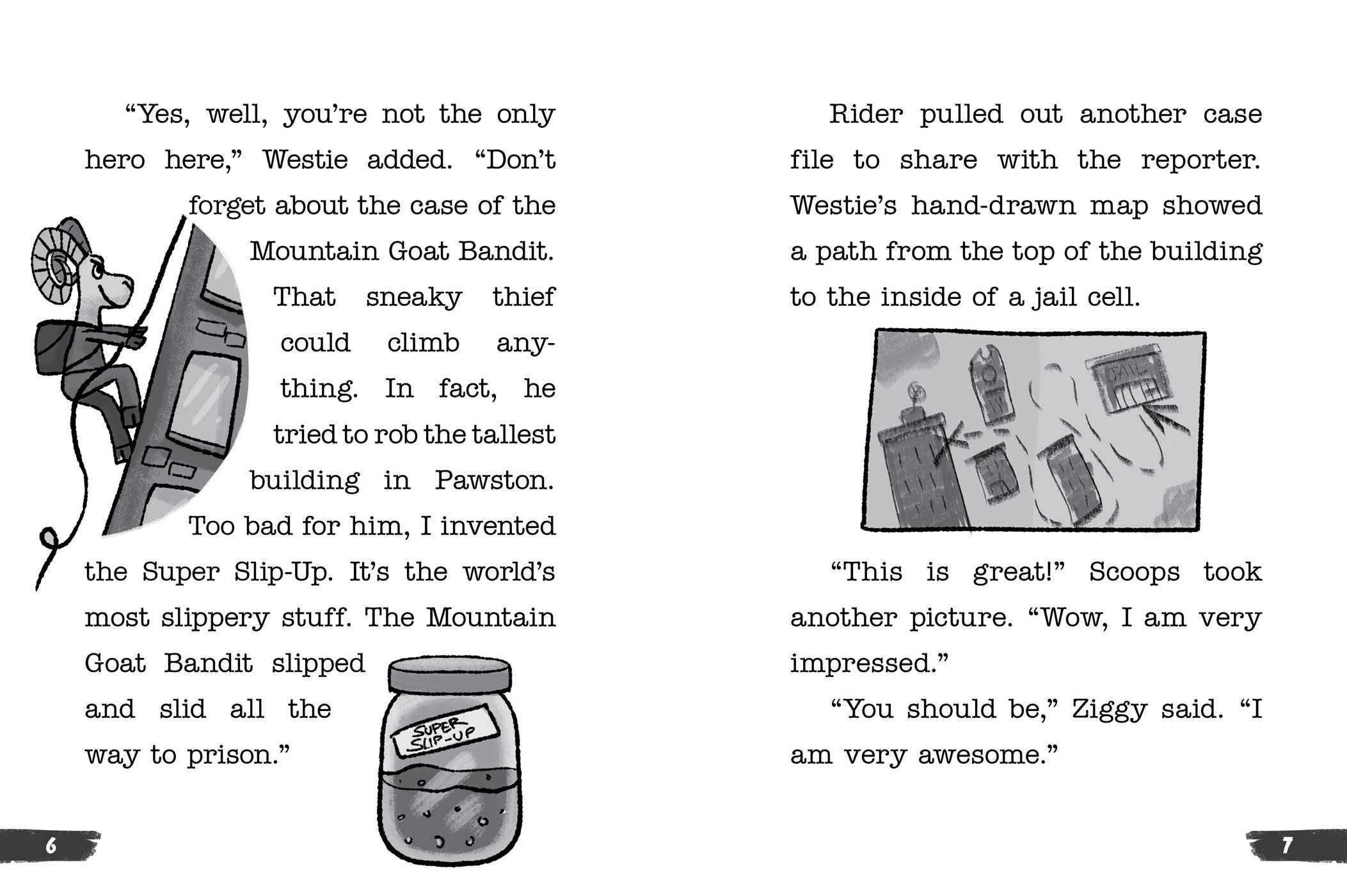 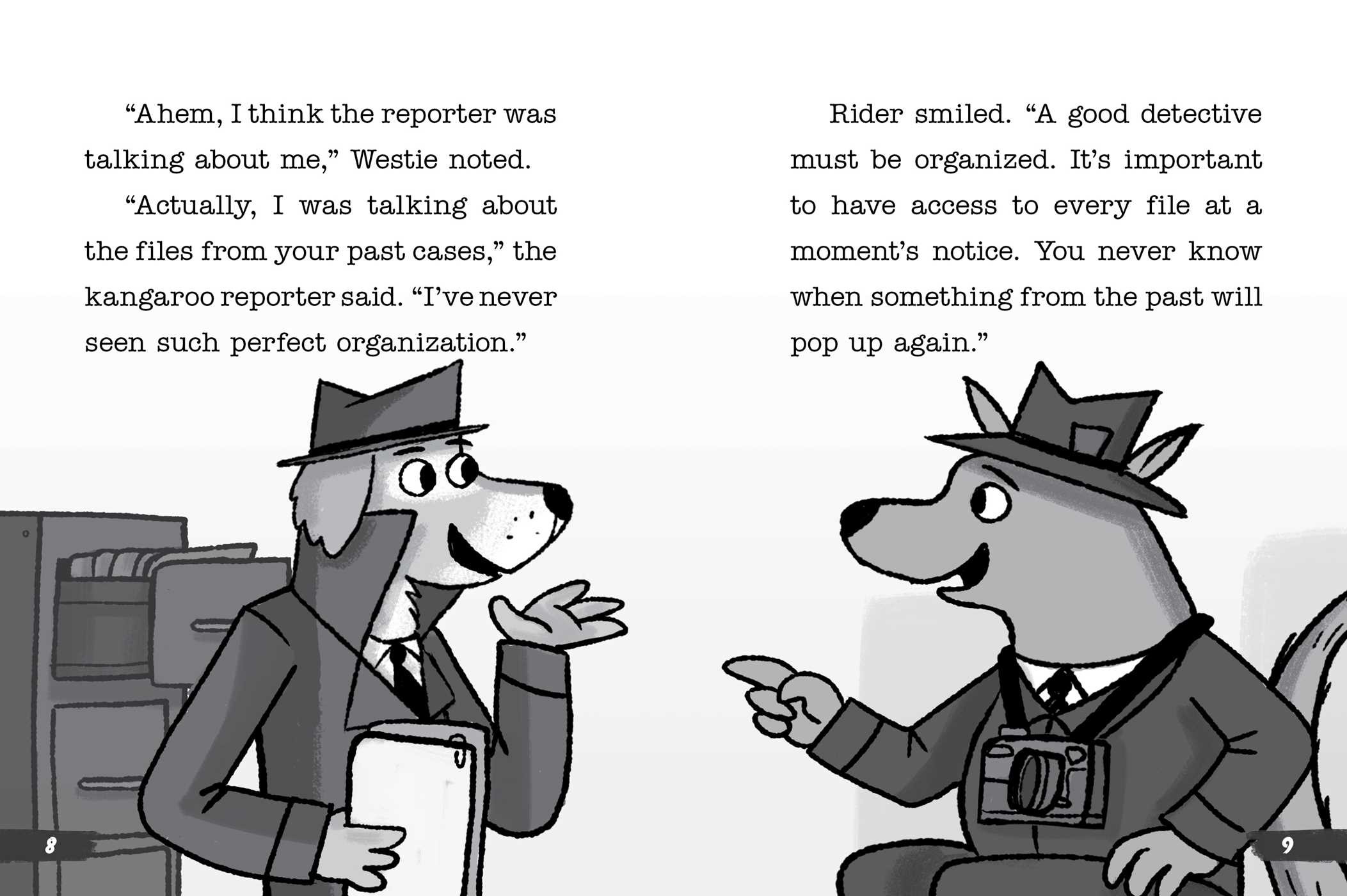 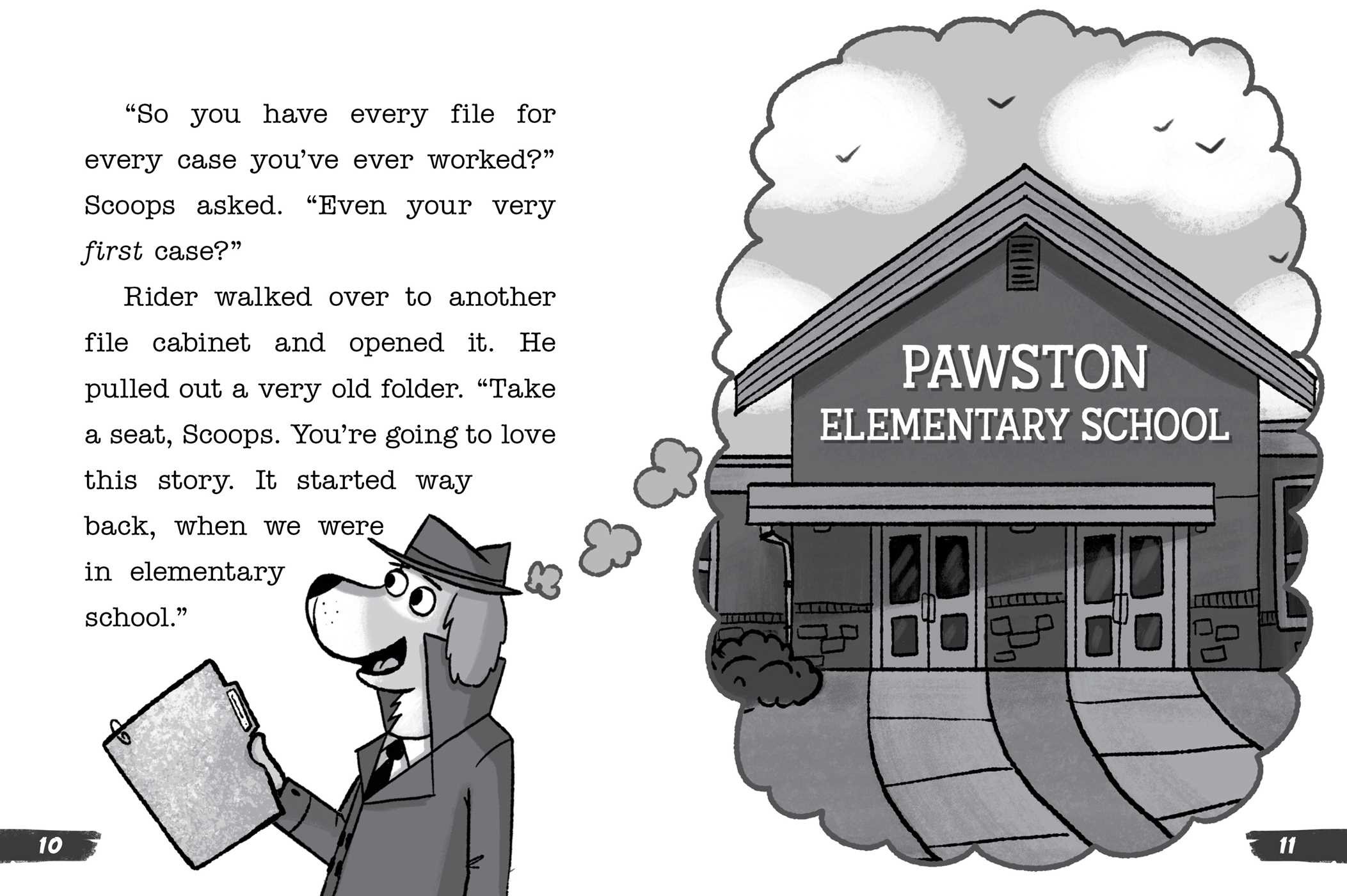 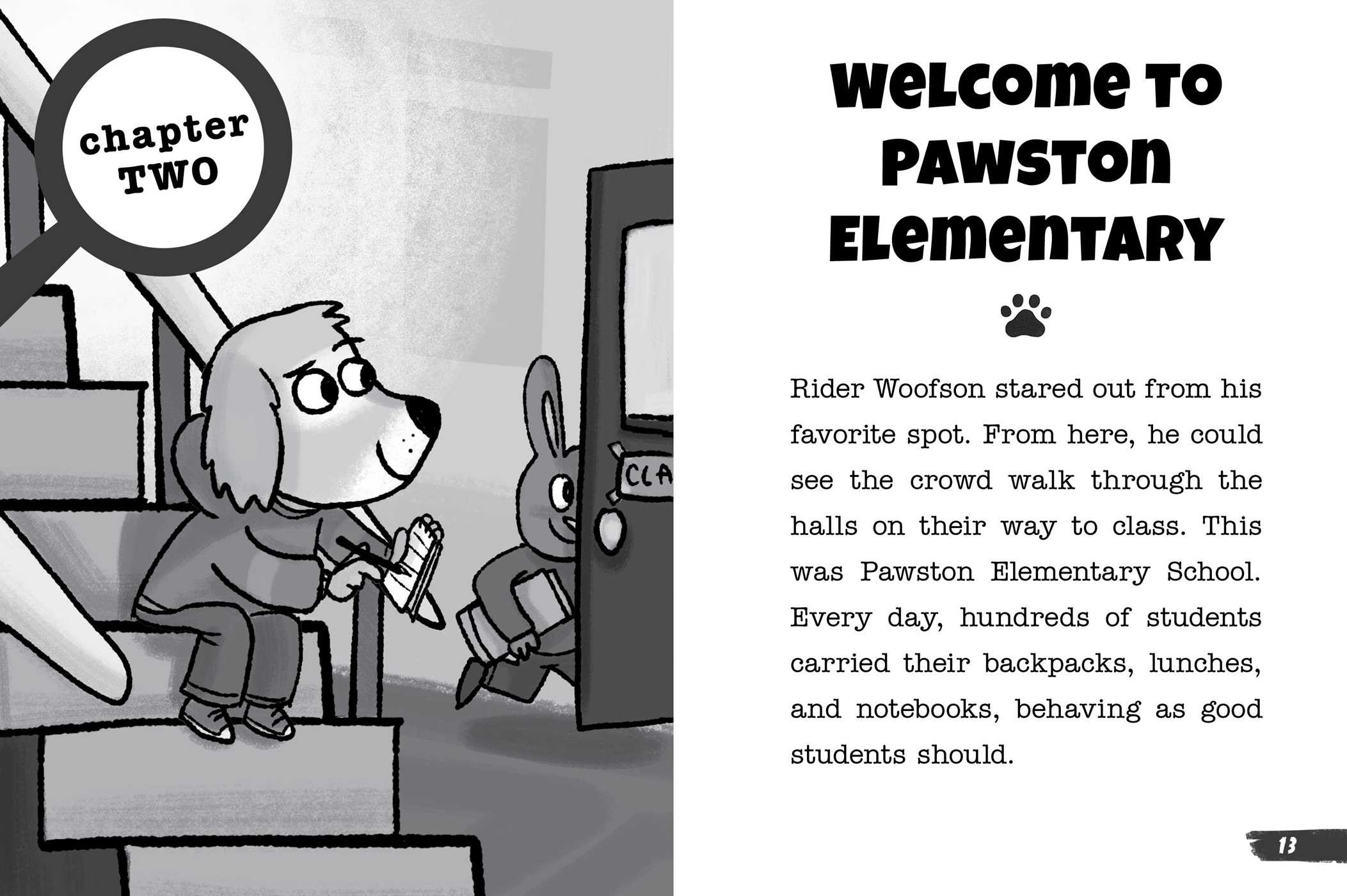 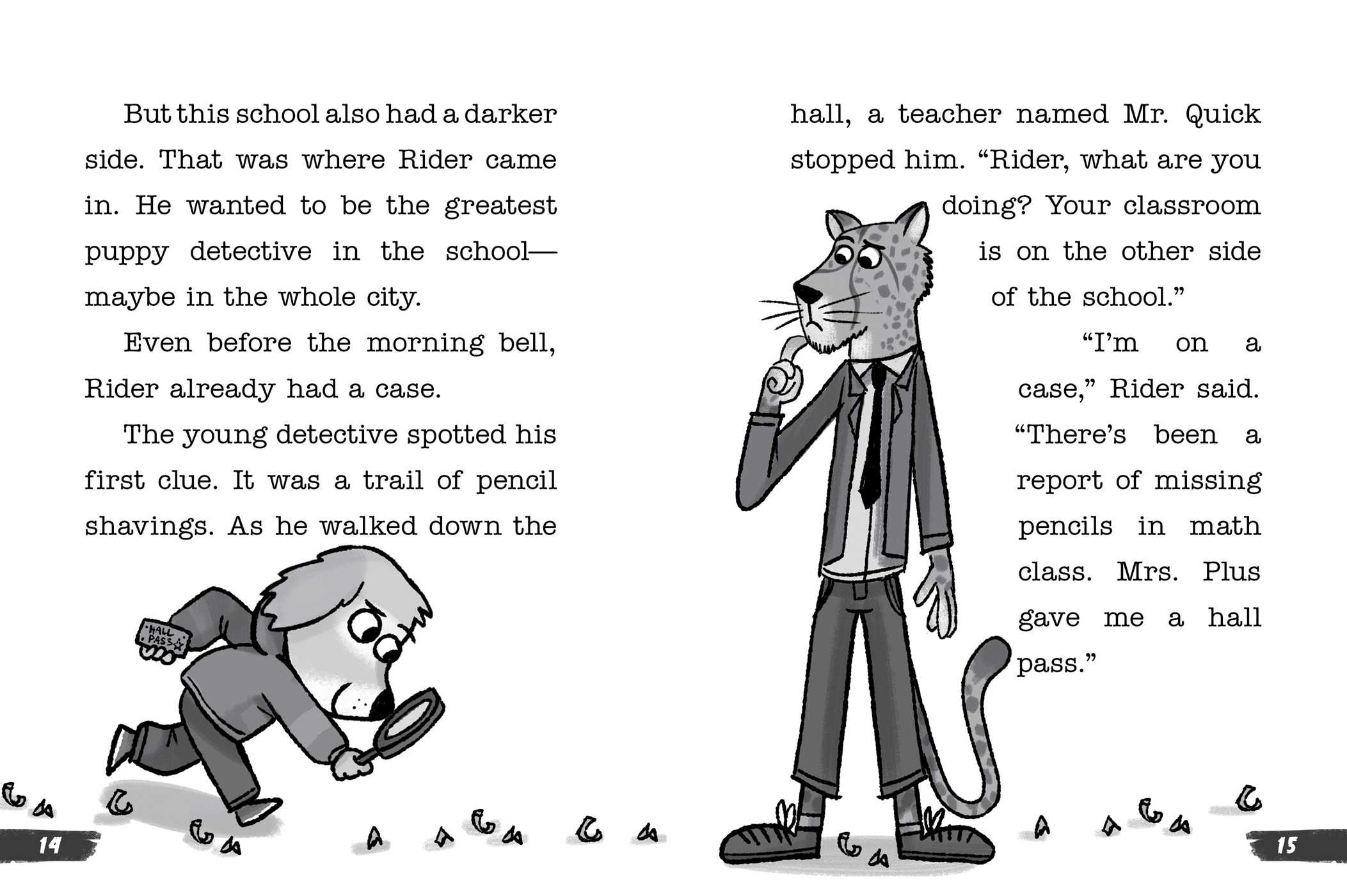 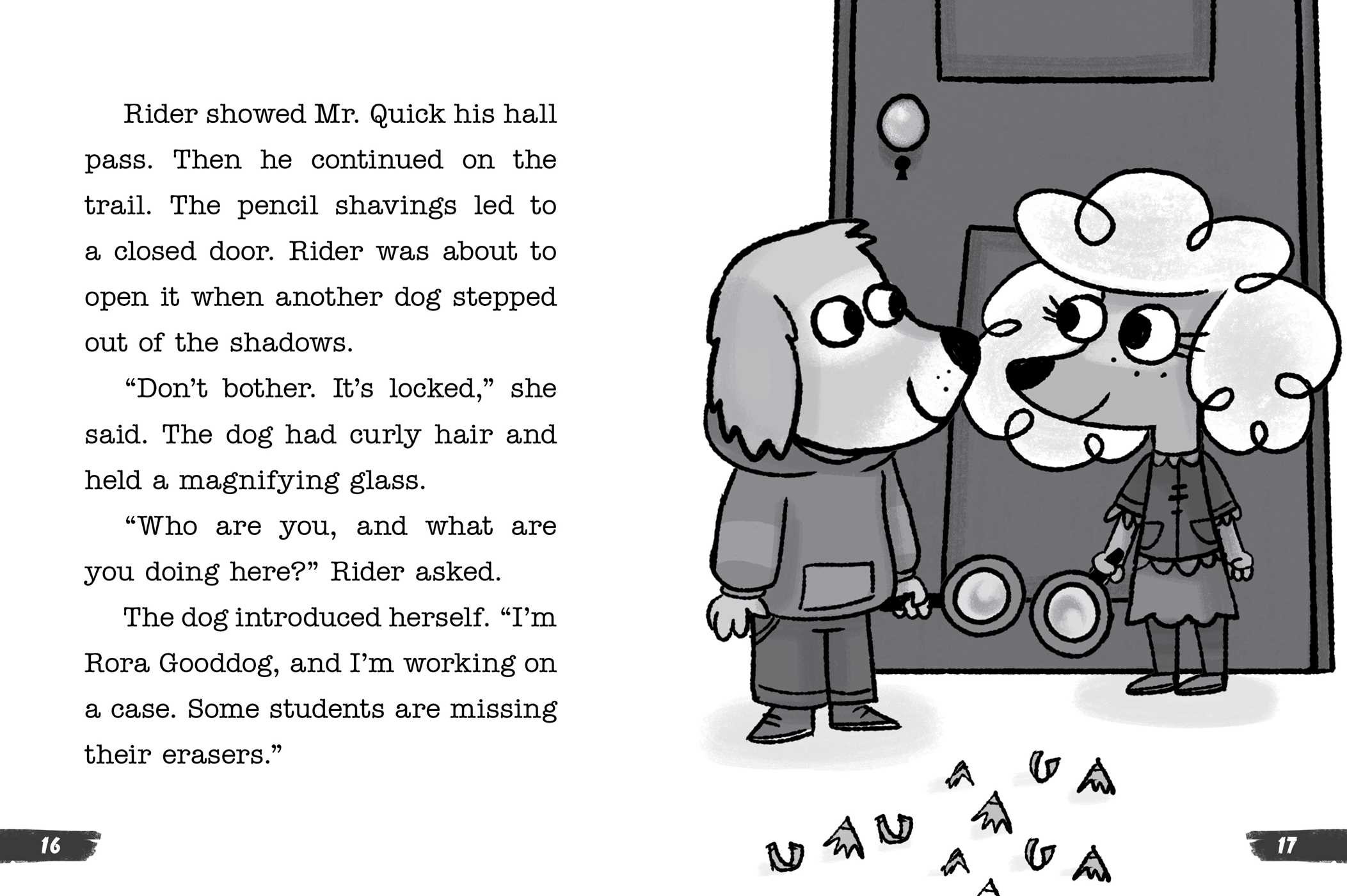 In this tenth Rider Woofson adventure, go back in time with Rider and the PI Pack as they relive their very first case!

When Rider is interviewed by the Pawston Daily News, he shares the untold story of how the PI Pack first met. As he relives their very first case, Rider discovers that someone has stolen all the past evidence! Can the PI Pack find the lost clues before the truth is printed for the whole world to read?

With easy-to-read language and illustrations on almost every page, the Rider Woofson chapter books are perfect for emerging readers.


Flash! A large camera snapped a picture of the P.I. Pack office as if it were a true crime scene. The photographer was a kangaroo. He hopped around the office, taking more pictures. Flash! Flash!

“Hey! What’s hopping—I mean, happening around here?” Westie Barker asked. The furry inventor pointed to a sign. “This area is top secret! Who are you?”

“Nice to meet you,” Scoops said. He held up his camera and snapped another picture. Flash!

Westie rubbed his eyes. “I wish I could say the same.”

It was Ziggy, the team’s youngest detective. “Not me though! Snap away. What kind of story are you doing about Pawston’s greatest detectives? Is it about the time we battled Icy Ivan, the evil Penguin Prowler? Good thing I brought my appetite. I saved the day by eating my way out of an Ice Cream, You Scream trap!”

Rider opened a cabinet drawer and took out a case file. He showed the reporter a picture of Icy Ivan and Ziggy, after he ate all the ice cream.

“Yes, well, you’re not the only hero here,” Westie added. “Don’t forget about the case of the Mountain Goat Bandit. That sneaky thief could climb anything. In fact, he tried to rob the tallest building in Pawston. Too bad for him, I invented the Super Slip-Up. It’s the world’s most slippery stuff. The Mountain Goat Bandit slipped and slid all the way to prison.”

Rider pulled out another case file to share with the reporter. Westie’s hand-drawn map showed a path from the top of the building to the inside of a jail cell.

“This is great!” Scoops took another picture. “Wow, I am very impressed.”

“Ahem, I think the reporter was talking about me,” Westie noted.

“Actually, I was talking about the files from your past cases,” the kangaroo reporter said. “I’ve never seen such perfect organization.”

Rider smiled. “A good detective must be organized. It’s important to have access to every file at a moment’s notice. You never know when something from the past will pop up again.”

“So you have every file for every case you’ve ever worked?” Scoops asked. “Even your very first case?”

Rider walked over to another file cabinet and opened it. He pulled out a very old folder. “Take a seat, Scoops. You’re going to love this story. It started way back, when we were in elementary school.”

Walker Styles grew up reading kids’ books, so it makes sense that he’s writing them now. And when he isn’t writing books, he’s out solving mysteries around the city of Manhattan, where he lives. Just the other day, he lost the book he was reading. Following all the clues, Walker deduced the couch ate it! (Well, the book was under the couch cushions. Still, mystery solved!).

Ben Whitehouse is an illustrator based in Birmingham, UK. He has previously worked in the animation industry as a character designer, animator, and stop motion puppet maker before finding his feet within the world of illustration. You can visit him at StopMotionBen.com.