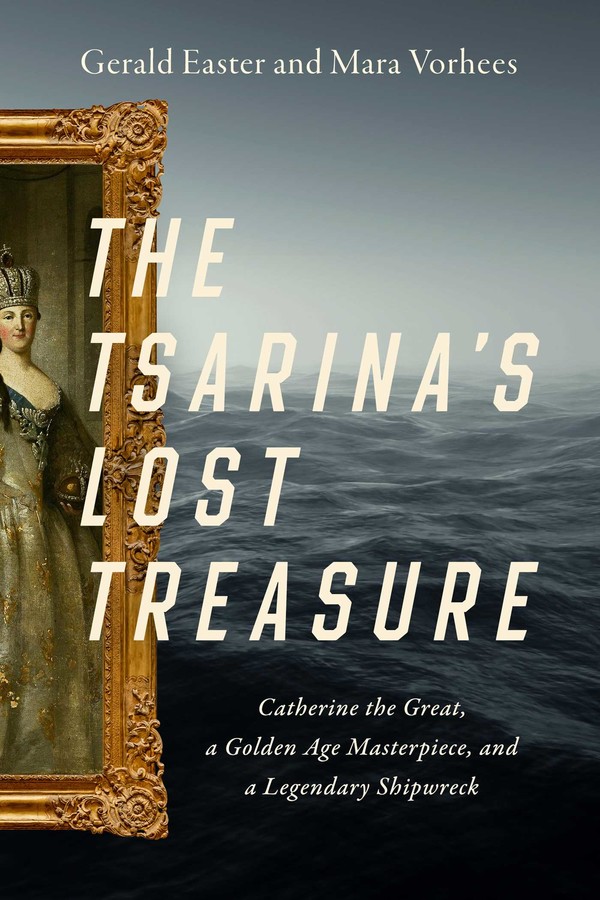 Catherine the Great, a Golden Age Masterpiece, and a Legendary Shipwreck

By Gerald Easter and Mara Vorhees
LIST PRICE $29.95
PRICE MAY VARY BY RETAILER

A riveting history and maritime adventure about priceless masterpieces originally destined for Catherine the Great.

On October 1771, a merchant ship out of Amsterdam,  Vrouw Maria, crashed off the stormy Finnish coast, taking her historic cargo to the depths of the Baltic Sea. The vessel was delivering a dozen Dutch masterpiece paintings to Europe’s most voracious collector: Catherine the Great, Empress of Russia. Among the lost treasures was The Nursery, an oak-paneled triptych by Leiden fine painter Gerrit Dou, Rembrandt’s most brilliant student and Holland’s first international superstar artist. Dou’s triptych was long the most beloved and most coveted painting of the Dutch Golden Age, and its loss in the shipwreck was mourned throughout the art world.

Vrouw Maria, meanwhile, became a maritime legend, confounding would-be salvagers for more than two hundred years. In July 1999, a daring Finnish wreck hunter found Vrouw Maria, upright on the sea floor and perfectly preserved. The Tsarina’s Lost Treasure masterfully recounts the fascinating tale of Vrouw Maria—her loss and discovery—weaving together the rise and fall of the artist whose priceless masterpiece was the jewel of the wreckage.

Gerald Easter is a Professor at Boston College who has been teaching and writing about Russian/East European politics and history for more than two decades.

Mara Vorhees is a travel writer with an expertise in Russia, New England, and Central America. She has written or contributed to more than 40 guidebook editions, published by Lonely Planet.

“What defines a treasure, and who controls its fate? Easter and Vorhees expertly weave the story of the ship and the painting into history.  They plumb the two decades of drama that followed The Nursery’s rediscovery to combine important questions about the value of art and culture and the meaning of hertitage and to create an entertaining tale."

"Wide-ranging and meticulously researched. Easter and Vorhees braid the various threads of the story together and make a persuasive case.  Readers will covet this intriguing portrait of an art world mystery."

"An apprentice to Rembrandt, Gerritt Dou eventually surpassed his teacher in fame and wealth. Over the centuries, however, Dou’s reputation has shifted repeatedly with the tides of fashion in the arts. His story makes up one strand of this engaging new book by Easter and Vorhees. An intriguing narrative, and an entertaining yarn whose ending is yet to be written."

“Gerald Easter and Mara Vorhees skillfully weave the shipwreck of the Vrouw Maria and its secret cargo with the lives of Dutch Golden Age painter Gerrit Dou and Russia’s art-loving Catherine the Great. The high stakes search for the tsarina’s lost treasure, 18th century and modern, reads like a detective story. A true delight for fans of art, mystery, and maritime archeology.”

– Susan Jaques, author of The Empress of Art and The Caesar of Paris

"As the ‘Sea Hunters,’ we had seen wrecks as scattered fragments on coral reefs, as steel structures torn apart by storms and battles in deep water, as rusted, collapsed hulks, and as exquisitely preserved time capsules.  We’d found ships with profound historical and cultural connections. . . . Others were filled with cargo of exceptional value to science or archaeology—or had actual treasure. But until Vrouw Maria, we had never seen a ship that had all of that.  Lost art masterpieces?  A wreck found thanks to dedicated archival research and focused ocean surveys?  A wreck discovered incredibly intact, nestled between a shoal of rocks as sharp as dragon’s teeth?  This was a  wreck that should have been in a Clive Cussler novel."

"The Vrouw Maria was initially of no great importance—less than 100 feet in length it was just a two-masted wooden cargo ship. But what a cargo and what a story it harbors. The Tsarina’s Lost Treasure takes this long-lost ship and its priceless cargo, and blends in the story of Dutch art and its competitive owners.  And that is just the beginning of the story of Catherine the Great’s lost artworks."

Catherine the Great, a Golden Age Masterpiece, and a Legendary Shipwreck

By Gerald Easter and Mara Vorhees
LIST PRICE $29.95
PRICE MAY VARY BY RETAILER