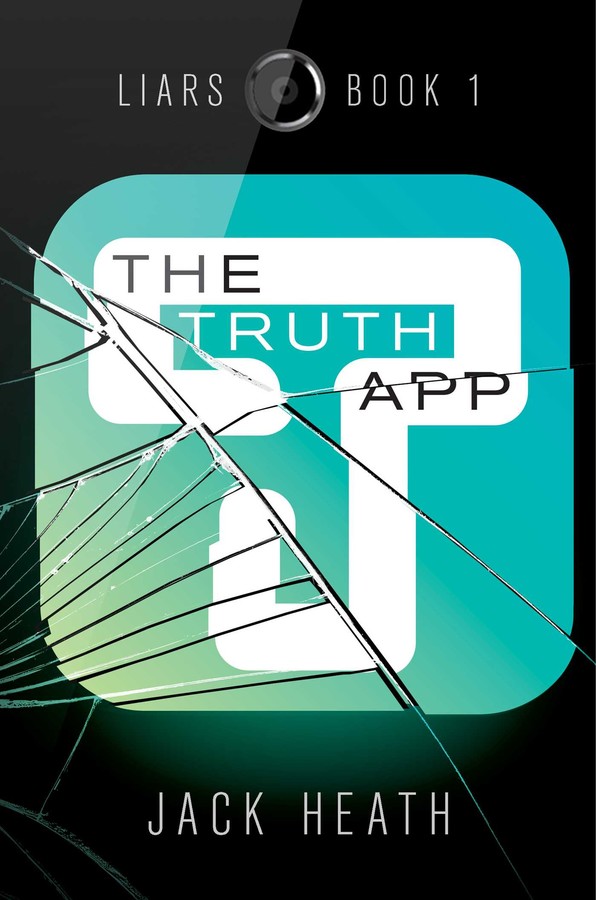 Book #1 of Liars
By Jack Heath
LIST PRICE $19.99
PRICE MAY VARY BY RETAILER

In this pulse-pounding techno-thriller, Jack Heath creates a world where everyone knows when you lie—and telling the truth doesn’t always set you free.

Jarli likes to think he’s an honest guy. He’s a big believer in telling the truth, no matter what. So he develops The Truth App, a mobile application that listens in on your conversations and can tell when someone’s lying. Then his app goes viral and, suddenly, Jarli is an internet sensation.

But, soon enough, Jarli realizes that being famous can be dangerous—especially when you’ve just exposed everyone’s deepest, darkest secrets. Now his entire town is out to get him; kids at school, teachers, the police, even his own family.

Also, an underground network of criminals has just added Jarli to their hit list. Sometimes, exposing the truth comes with a price…

He turned his head just in time to see the brown truck roaring toward Dad’s side of the car. Jarli opened his mouth to scream—

Smash! The impact threw him sideways. The seat belt jerked tight across his chest, crushing his ribs. He couldn’t get any air into his lungs. Half the car crumpled in toward Dad, who had let go of the steering wheel and thrown his arms up to protect his face.

“Daaaaaaad!” The screech of tearing metal drowned out Jarli’s voice. The sound burned through his eardrums and sank deep into his skull. The windows dissolved into tiny cubes of shatterproof glass that filled the air like hail, stinging his cheeks. He squeezed his eyes shut.

A few moments later everything was still. The echoes of screeching tires died away. The smell of melted rubber scorched the back of Jarli’s throat.

The truck started to reverse, taking Dad’s door with it. The window frame was tangled around the truck’s chrome bull bar. The hinges screeched and snapped, leaving the driver’s side of the car ripped open. The truck’s headlights stunned Jarli. They seemed as bright as twin suns.

The engine whined as the truck backed away.

“Dad?” Jarli croaked. He could barely hear his own voice over the ringing in his ears.

Dad turned his head like it weighed a ton, his curly hair glued to his forehead with sweat.

“What?” Jarli wiggled his jaw, trying to fix his ears.

Jarli nodded, sending a jab of pain up his neck. “I think I’m all right. Are you—”

Vvvvvrooom! An engine snarled. Jarli looked over and saw the brown truck zooming toward the car again. He got a split-second view of an old man with thick black glasses and a baseball cap, gloved hands gripping the steering wheel. Suddenly Jarli realized: This crash was not an accident.

The old man in the truck was attacking them.

Dad slammed his foot down on the accelerator. The wrecked car lurched forward, bent wheels grinding. Too slow.

The speeding truck smashed into the rear corner of the car, sending it into a spin. The world outside the windows rushed past. The neon vacancy sign outside Kelton’s motel flew across Jarli’s field of view twice. He felt like he might throw up.

Clang! The car hit a streetlight and stopped spinning. Jarli slumped back into his seat, too dizzy to move. The streetlight leaned over and then paused, as though deciding whether to fall. It didn’t, but the bulb dropped out of it and shattered against the road like a water balloon. The street was plunged into darkness.

Jarli fumbled with his seat belt, hands shaking. He stabbed the orange button with his thumb until the buckle popped out. Then he shoved the door open and tumbled out onto the road. “He’s trying to kill us!” he cried, scrambling to his feet. “Run!” Dizzy and sore, Jarli ran on wobbling legs past the dead streetlight, past the motel with its darkened windows, past the trash cans—

And then he realized Dad wasn’t with him.

He turned to look back. The wrecked car was deep in shadow, but Jarli could see Dad’s outline. He was slumped in the driver’s seat. The second impact had knocked him out. Or worse.

Heart pounding, Jarli looked around for help. He couldn’t see anyone. No police, no other vehicles, no pedestrians. Another quiet night in Kelton. But he could hear the truck’s motor, idling somewhere in the gloom, headlights off. The old man could ram the car again at any moment. And Dad was a sitting duck.

Jarli sprinted back to the car. As he got closer, he saw that an airbag had exploded out of the steering wheel. Dad’s face was buried in the white fabric.

He grabbed his father’s shoulders and pulled him backward, leaving a smudge of blood on the airbag. There was a deep cut across the bridge of Dad’s nose and his cheekbone had turned a mottled purple. His eyes were closed.

Tires crunched. An engine grumbled. The truck was coming back.

Frantic, Jarli reached over, unbuckled Dad’s seat belt, and tried to drag him out of the car. But Jarli was still dizzy, and Dad was too heavy. Jarli fell back and Dad landed on him, crushing Jarli’s legs against the road.

Headlights swept across them. The truck was back!

Dad felt like a bag of bricks. Jarli couldn’t roll him off.

He braced himself as the headlights got closer.

Jack Heath is the author of several books, including the Danger series, the Fero Files, the Ashley Arthur series, the Agent Six of Hearts series, the Liars series, and The Mysterious World of Cosentino series. He lives in Darwin, Australia.

Book #1 of Liars
By Jack Heath
LIST PRICE $19.99
PRICE MAY VARY BY RETAILER