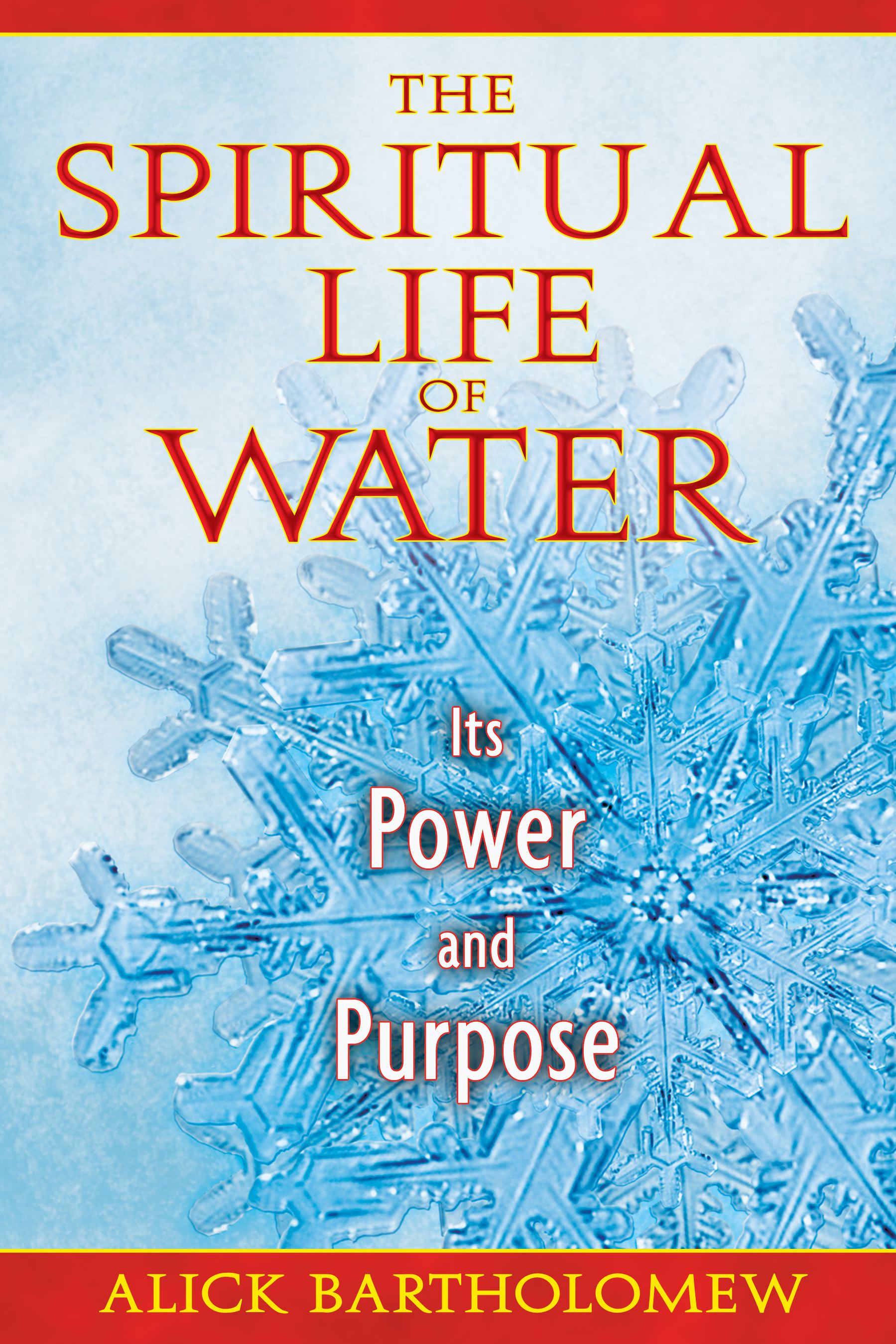 By Alick Bartholomew
LIST PRICE $19.95
PRICE MAY VARY BY RETAILER

• How water, as a conscious organism, unites all of creation in one vast communication network

• Includes the research of Masaru Emoto and Viktor Schauberger

• Discusses the energetics of water, water treatments, finding the best-quality water, and the perils of bottled and distilled water

Once held sacred the world over, water contains a wisdom few today acknowledge. Driving everything from our metabolic processes to weather patterns and climate change, its real significance lies in its role as a medium for metamorphosis, recycling, and exchanging energy and information.

Seeking a return to our ancestors’ reverence for water, Alick Bartholomew explores water’s sacred uses, its role in our bodies and environment, and the latest scientific studies to reveal that water is a conscious organism that is self-creating and self-organizing. Examining new discoveries in quantum biology, he shows how water binds all of life into one vast network of energy, allowing instant communication and coherence. Covering the research of water visionaries such as Viktor Schauberger, Mae-Wan Ho, and Masaru Emoto, he examines the memory of water and reveals how the same water has been cycling through Earth’s history since the dawn of time, making water nature’s greatest recycling and reclaiming agent. With information on the energetics of water, water treatments, finding the best-quality water, and the perils of bottled and distilled water, this book offers us a path to reclaim the spirituality of water.

The Blood of the Earth

Were water actually what hydrologists deem it to be--a chemically inert substance--then a long time ago there would already have been no water and no life on this Earth. I regard water as the blood of the Earth. Its internal process, while not identical to that of our blood, is nonetheless very similar. It is this process that gives water its movement.
--Viktor Schauberger

Viktor Schauberger, an unorthodox researcher, established a wonderful picture of the behavior of water. When it reaches maturity water displays amazing properties. He showed how, when it is vibrant and healthy, it pulsates, twists, and spirals in a very specific way that maintains its vitality and purity, enabling it to fulfil its function for all organisms as an energy channel and a conveyor of nutrients and waste.

Schauberger said that when it is immature, water takes, absorbing minerals with a voracious appetite, to give back the much-needed nourishment to its environment only when mature as in an established river. Water has a memory; when we think we have “purified” our water supplies of the contaminating chemicals and hormones, their subtle energy remains, as well as that of the chemicals added as disinfectant to make it “drinkable.” The subtle energy of these contaminants remains, polluting our energy bodies in the same way that chemicals affect our physical bodies.

We can observe water’s coherence in everyday situations. If we watch water streaming down an inclining road after a shower of rain, we will notice how it pushes down in a jerky rhythm, as pulsations. That is because water is “alive”--it is inherent to its nature that it actually does pulsate, just as blood pulsates through the veins and arteries of the body. But the most extraordinary fact about water that Schauberger discovered is that it has the power of self-purification and can restore its generative properties in the same way that other living things can heal themselves.

Water and the Health of the Earth

Water in the earth works like blood in the human body; it performs similar roles--to nourish, communicate, and recycle. Likewise, as Attenborough and Schauberger have both warned, the health of the earth’s water is as much an indication of the health of the whole organism as is blood to the body.

We do not treat water as the most precious substance for life on Earth because our current scientific model does not acknowledge water’s extraordinary properties. This critical situation will change only when a new generation of scientists can recognize Earth as an organism and humanity as truly part of Nature, subject to her laws. This is the first priority, even before we consider what “treatment” is necessary.

Earth’s water domain is going through enormous changes brought about by global warming. Climate change is altering the behavior and distribution of rainfall, exacerbating extreme weather, and melting the glaciers, which have been a valuable storehouse of fresh water and have maintained river flow for the millennia of humanity’s existence on Earth. The oceans are losing their ability to store CO2, and their fauna is suffering stress, causing migration and species loss.

Earth is known as the water planet. The wonderful, blue color it presents from space derives from the abundant amount of water in its atmosphere (which optically screens out the red end of the spectrum) and from its surface being 70 percent covered by the oceans. As the principal component of this planet’s surface, water is constantly moving, circulating and interchanging. In its vaporous state it swirls in great streams, moving heat and cold from one latitude to another, balancing the temperature. Humidity, wind, and temperature and their changing behavior are the basic ingredients of atmospheric weather.

Despite its ubiquitous presence, water prefers to play a mysterious role. Like the chorus in a Greek play, it stays in the background, yet it is the foundation of all processes. Its role is a quandary, on the one hand passive--for it does not in itself initiate processes, being the vehicle for change--on the other active and facilitating. There is no question but that water rules the world. The outcome of energetic processes may be beneficial or catastrophic, but water, in one of its three states, makes it all happen.

Our incomplete knowledge of water’s role and function makes it hard to predict the processes of instability and change that we are experiencing today. Water magnifies and accelerates a process like that of climate change. The future of humanity on the planet will to some extent rest on our ability to understand that the critical points of the warming cycle are determined by positive feedback loops that depend on water. For example, we have only recently come to understand that the oceans are the largest store of CO2.

The vast oceans, teeming with life, have stored enormous amounts of minerals and salts washed down from the continents over three billion years. They have their own complex circulatory system, which balances temperatures and nutrients. The landmasses receive most of their fresh water as precipitation derived from the oceans. Much of this finds its way into the surface of the earth, forming artesian basins and enormous inaccessible aquifers. But the earth also has even greater amounts of ancient water locked up in rocks and volcanic material from its very formation and may also be making new primary water. All of this water circulates, carrying energy.

The habitable mass of the oceans is hundreds of times greater than that of the land and the atmosphere just above it. Although it has been calculated that 90 percent of life is in the oceans, we still know much less about the oceans and their history than about the land. However, we shall be more concerned in this study with fresh water. Water, as the vehicle for life, may indeed have its own evolutionary journey, as part of its parent Earth’s history.
Alick Bartholomew

Alick Bartholomew (1930-2015) studied geology and geography at the University of Cambridge and University of Chicago. He was part of the editorial team that in 1962 published Rachel Carson’s Silent Spring. In 1971 he founded the Turnstone Press, publisher of Jonathan Livingston Seagull, with a vision to reconcile science with a spiritual view of the world. In 1984 he started Gateway Books in Bath, England, continuing the Turnstone vision as well as introducing scientific paradigms, such as a study of the crop circle phenomenon, the scientific evidence for geological catastrophism, and Mae-Wan Ho’s critique of genetic engineering. He is also the author of several books, including Hidden Nature: The Startling Insights of Viktor Schauberger and The Spiritual Life of Water.

“. . . filled with many color photos that help explain the magic and mystery of water.”

“The Spiritual Life of Water is an important book. It not only reminds us of its basic need but it unites us to nature, mother earth, and our source.”

“Alick Bartholomew, part of the editorial team that published Rachel Carson's Silent Spring, has pulled together a whole and wholistic view of our dwindling water supply. Alongside the facts, he spells out a multitude of reason that we should wake up, pay attention, and take action to restore the finite foundation of our existence. The Spiritual Life of Water is likely to be the pivot upon which a new realization of our connection to nature turns.”

“With information on the energetics of water, water treatments, find the best-quality water, and the perils of bottled and distilled water, this book offers us a path to reclaim the spirituality of water. It contains beautiful pictures of water, links and resources, extensive references and a comprehensive index.”

“Words cannot describe the extraordinarily comprehensive, deep and lucid treatment of the role of water within our bodies and in the environment. Based on more than a century of scientific study, much of which hasn’t been recognized by mainstream scientists, Bartholomew’s magnum opus argues convincingly that water is most life-giving and life-enhancing substance known to humanity: we can either destroy ourselves and our surroundings by polluting our water or we can heal through natural processes, positive intention and vortex motion. Water has consciousness and memory. This is the most important book I’ve read in the new century and will be required reading for all my students.”

“[This] book is kind of a water primer, covering everything from the energetics of water to specifics on dwindling sources, with the reminder that ti is a sacred commodity, essential to our life.”

“An intelligent and primarily scientific work . . .”

“. . . this magnum opus is lucid, deep and comprehensive, covering the extraordinary contributions of Viktor Schauberger, Mae-Wan Ho, Masaru Emoto and others regarding water’s subtle properties, which provide breakthrough insights into restoring purity and vitality to water. It should be a primary resource for any serious student of both the old and new sciences.”

“Once in a great while, I stumble upon a book that should be printed in solid gold ink, because its words are a treasure. This is the way I feel about The Spiritual Life of Water by Alick Bartholomew. This book takes the reader inside the story of the most important substance in the world – water – and shows you rather than tells you, why water is the key to life itself and a well of deep intelligence. It is a book so chock full of fascinating scientific facts and mind-blowing spiritual insights that my copy has almost as many book marks as there are pages.”

By Alick Bartholomew
LIST PRICE $19.95
PRICE MAY VARY BY RETAILER