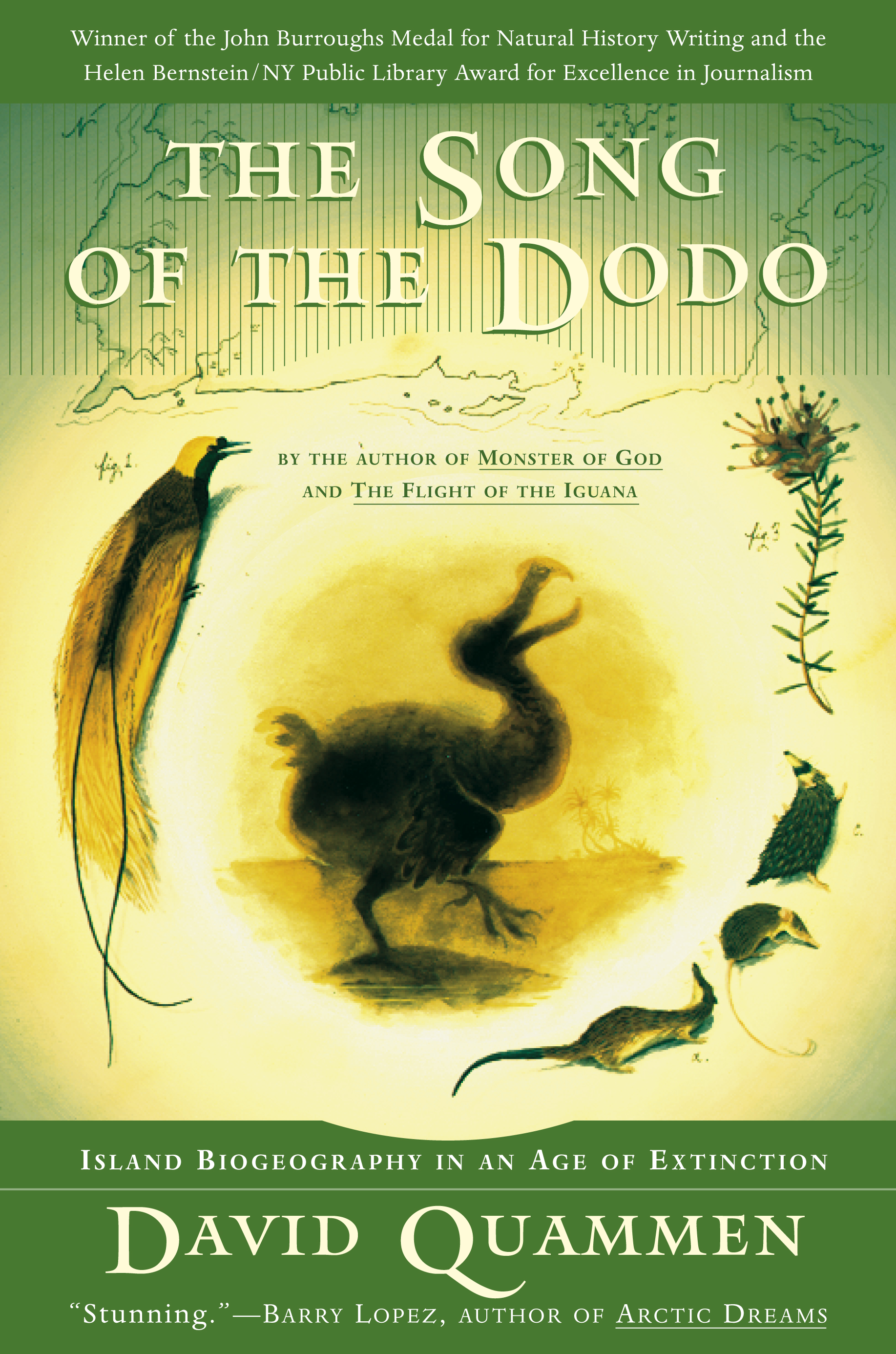 By David Quammen
LIST PRICE $22.00
PRICE MAY VARY BY RETAILER

David Quammen's book, The Song of the Dodo, is a brilliant, stirring work, breathtaking in its scope, far-reaching in its message -- a crucial book in precarious times, which radically alters the way in which we understand the natural world and our place in that world. It's also a book full of entertainment and wonders.
In The Song of the Dodo, we follow Quammen's keen intellect through the ideas, theories, and experiments of prominent naturalists of the last two centuries. We trail after him as he travels the world, tracking the subject of island biogeography, which encompasses nothing less than the study of the origin and extinction of all species. Why is this island idea so important? Because islands are where species most commonly go extinct -- and because, as Quammen points out, we live in an age when all of Earth's landscapes are being chopped into island-like fragments by human activity.
Through his eyes, we glimpse the nature of evolution and extinction, and in so doing come to understand the monumental diversity of our planet, and the importance of preserving its wild landscapes, animals, and plants. We also meet some fascinating human characters. By the book's end we are wiser, and more deeply concerned, but Quammen leaves us with a message of excitement and hope.

Let's start indoors. Let's start by imagining a fine Persian carpet and a hunting knife. The carpet is twelve feet by eighteen, say. That gives us 216 square feet of continuous woven material. Is the knife razor-sharp? If not, we hone it. We set about cutting the carpet into thirty-six equal pieces, each one a rectangle, two feet by three. Never mind the hardwood floor. The severing fibers release small tweaky noises, like the muted yelps of outraged Persian weavers. Never mind the weavers. When we're finished cutting, we measure the individual pieces, total them up -- and find that, lo, there's still nearly 216 square feet of recognizably carpetlike stuff. But what does it amount to? Have we got thirty-six nice Persian throw rugs? No. All we're left with is three dozen ragged fragments, each one worthless and commencing to come apart.

Now take the same logic outdoors and it begins to explain why the tiger, Panthera tigris, has disappeared from the island of Bali. It casts light on the fact that the red fox, Vulpes vulpes, is missing from Bryce Canyon National Park. It suggests why the jaguar, the puma, and forty-five species of birds have been extirpated from a place called Barro Colorado Island -- and why myriad other creatures are mysteriously absent from myriad other sites. An ecosystem is a tapestry of species and relationships. Chop away a section, isolate that section, and there arises the problem of unraveling.

For the past thirty years, professional ecologists have been murmuring about the phenomenon of unraveling ecosystems. Many of these scientists have become mesmerized by the phenomenon and, increasingly with time, worried. They have tried to study it in the field, using mist nets and bird bands, box traps and radio collars, ketamine, methyl bromide, formalin, tweezers. They have tried to predict its course, using elaborate abstractions played out on their computers. A few have blanched at what they saw -- or thought they saw -- coming. They have disagreed with their colleagues about particulars, arguing fiercely in the scientific journals. Some have issued alarms, directed at governments or the general public, but those alarms have been broadly worded to spare nonscientific audiences the intricate, persuasive details. Others have rebutted the alarmism or, in some cases, issued converse alarms. Mainly these scientists have been talking to one another.

They have invented terms for this phenomenon of unraveling ecosystems. Relaxation to equilibrium is one, probably the most euphemistic. In a similar sense your body, with its complicated organization, its apparent defiance of entropy, will relax toward equilibrium in the grave. Faunal collapse is another. But that one fails to encompass the category of floral collapse, which is also at issue. Thomas E. Lovejoy, a tropical ecologist at the Smithsonian Institution, has earned the right to coin his own term. Lovejoy's is ecosystem decay.

His metaphor is more scientific in tone than mine of the sliced-apart Persian carpet. What he means is that an ecosystem -- under certain specifiable conditions -- loses diversity the way a mass of uranium sheds neutrons. Plink, plink, plink, extinctions occur, steadily but without any evident cause. Species disappear. Whole categories of plants and animals vanish. What are the specifiable conditions? I'll describe them in the course of this book. I'll also lay siege to the illusion that ecosystem decay happens without cause.

Lovejoy's term is loaded with historical resonance. Think of radioactive decay back in the innocent early years of this century, before Hiroshima, before Alamogordo, before Hahn and Strassmann discovered nuclear fission. Radioactive decay, in those years, was just an intriguing phenomenon known to a handful of physicists -- the young Robert Oppenheimer, for one. Likewise, until recently, with ecosystem decay. While the scientists have murmured, the general public has heard almost nothing. Faunal collapse? Relaxation to equilibrium? Even well-informed people with some fondness for the natural world have remained unaware that any such dark new idea is forcing itself on the world.

What about you? Maybe you have read something, and maybe cared, about the extinction of species. Passenger pigeon, great auk, Steller's sea cow, Schomburgk's deer, sea mink, Antarctic wolf, Carolina parakeet: all gone. Maybe you know that human proliferation on this planet, and our voracious consumption of resources, and our large-scale transformations of landscape, are causing a cataclysm of extinctions that bodes to be the worst such event since the fall of the dinosaurs. Maybe you are aware, with distant but genuine regret, of the destruction of tropical forests. Maybe you know that the mountain gorilla, the California condor, and the Florida panther are tottering on the threshold of extinction. Maybe you even know that the grizzly bear population of Yellowstone National Park faces a tenuous future. Maybe you stand among those well-informed people for whom the notion of catastrophic worldwide losses of biological diversity is a serious concern. Chances are, still, that you lack a few crucial pieces of the full picture.

By clicking 'Sign me up' I acknowledge that I have read and agree to the privacy policy and terms of use. Free ebook offer available to NEW US subscribers only. Offer redeemable at Simon & Schuster's ebook fulfillment partner. Must redeem within 90 days. See full terms and conditions and this month's choices.
Reading Group Discussion Points


Recommended Readings
Anthropologist on Mars, Oliver Sacks
Arctic Dreams, Barry Lopez
Broadsides from the Orders: A Book of Buys, Sue Hubbell
The Control of Nature, John McPhee
Dwellings: Reflections on the Natural World, Linda Hogan
Field Notes: The Grace Note of the Canyon Wren, Barry Lopez
The Last of the Tasmanians, David Davies
The Malay Archipeligo, Alfred Wallace
My Life: A Record of Events and Opinions: Vols. I and II, Alfred Wallace
The Ninemile Wolves, Rick Bass
The Origin of Species, Charles Darwin
The Voyage of the Beagle: Charles Darwin's Journal of Researches, Charles Darwin 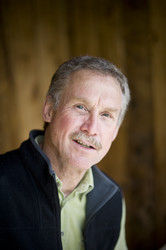 By David Quammen
LIST PRICE $22.00
PRICE MAY VARY BY RETAILER