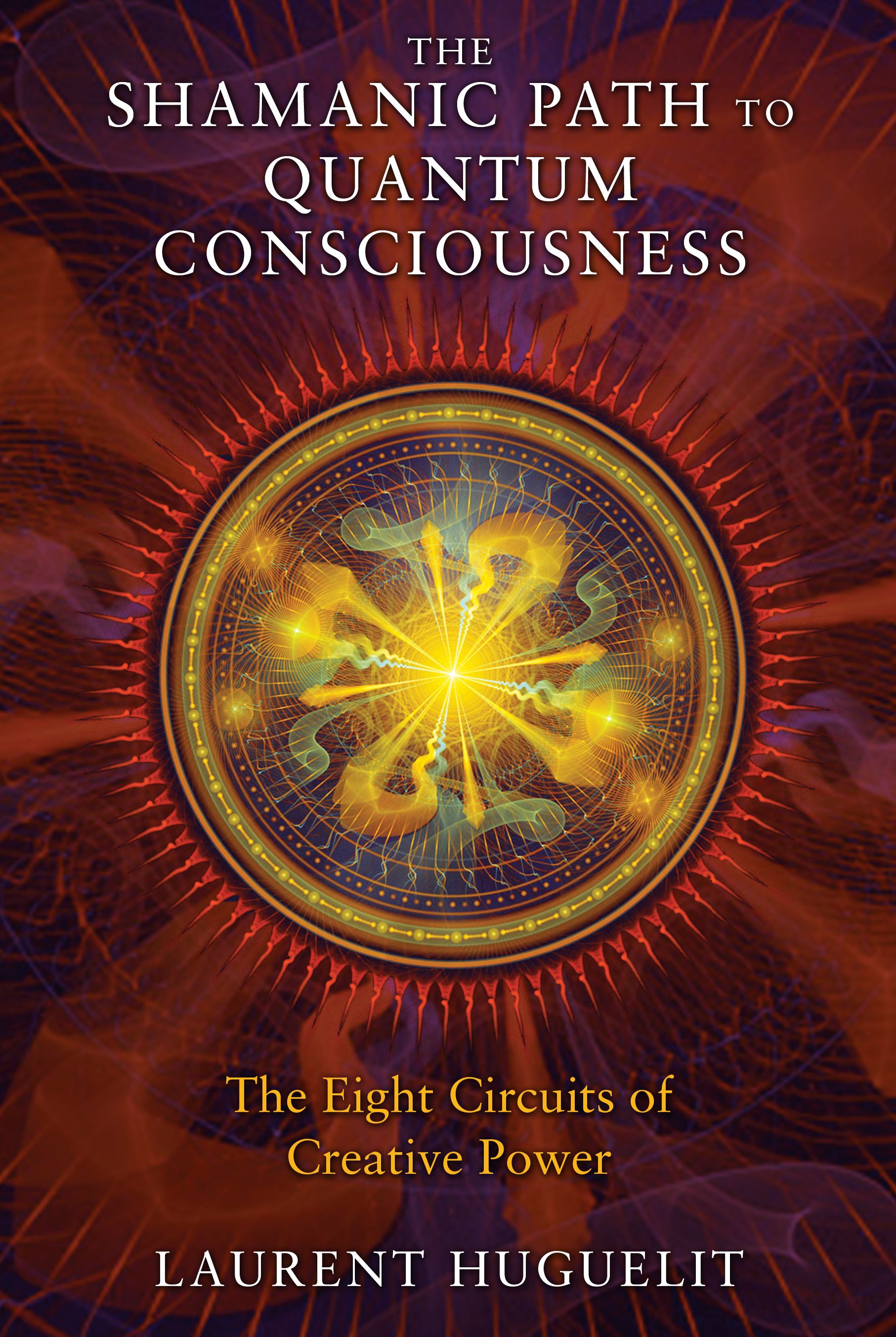 Uniting shamanism with quantum physics and psychology for conscious evolution, manifestation of desires, and the development of the soul

• Explains how the 8 circuits are interconnected through feedback loops--if one is overactive, it can cause the others to shut down

First outlined by Timothy Leary and later expanded by Robert Anton Wilson and Antero Alli, the eight-circuit model of consciousness explains how the soul is multidimensional and functions on eight distinct interconnected planes that form the eight circuits of conscious awareness. Each circuit is connected to certain behaviors and personality traits--the second circuit, for example, is connected to emotional consciousness, such as intuition, feelings of courage, or, in its unbalanced state, aggression and domination, and the eighth circuit, the creative circuit of quantum consciousness, is related to limitless perception, understanding, and action that extends far beyond the limits of planet Earth.

Laurent Huguelit explains how these eight levels of awareness are interconnected through feedback loops, forming a cybernetic mapping of the soul. He explores the underactive, overactive, and balanced states of each circuit, offering many psychological profiles as examples. He reveals how activating a circuit that has been neglected can help bring another into balance. Connecting this model of conscious evolution to shamanism--the oldest consciousness science known to man--the author explains how to balance and upgrade your own circuits through shamanic techniques. He reveals how to reconnect with source energy by deprogramming trauma from your childhood that can affect your circuits. With access to this unlimited energy you can activate your innate creative power to manifest your desires and shape reality.

Uniting shamanism and the law of attraction with advanced concepts of modern psychology, quantum physics, and the Akashic field theory of Ervin Laszlo, Laurent Huguelit offers a practical map of human consciousness and the development of the soul as well as a vision for the cybernetic future of shamanism.

Since the dawn of time shamans have been specialists in ordinary states of consciousness (terrestrial circuits) and non-ordinary states of consciousness (supra-terrestrial circuits). In exploring the energy layers that make up Reality with a capital “R,” they have drawn up numerous cosmological maps and refined techniques aimed at using the potentialities of these energy layers to make life on Earth easier and more pleasant. Their practicality and open-mindedness are such that today they are still looking for new solutions to new problems without limiting themselves with considerations of “objectivity” or “truth.” Their position has always been very clear: what is objective is what is perceived and what is true is what works. And no possibility is to be set aside.

Historians of religion and anthropologists have observed that a universal cosmology has been used by the shamans of all traditions. This cosmology, which proceeds directly out of explorations of the multidimensional consciousness of the sixth circuit (the psychic circuit), is called the cosmology of the three worlds. The non-ordinary reality the shamans experience when their souls travel is divided into three distinct regions: the Lower World , the Middle World, and the Upper World.

The shamanic journey is made possible by the use of specific techniques aimed at stimulating an altered state of consciousness that opens the doors to these three worlds. On this psychic journey, the shaman develops his cartography of Reality, learns healing techniques, and enters into contact with the inhabitants of the non-ordinary worlds--the spirits.

The Lower World is the world of telluric energies through which the shaman connects to the survival instinct. This is why the spirits the shaman contacts in this world are often the animal spirits called power animals. They allow him to develop his anchoring to the earth and his capacity to take full responsibility for his survival. The Lower World is also inhabited by the spirits of dead shamans who help the living shamans accomplish their tasks.

It is thanks to the Lower World and the root/somatic circuit pair that the shaman is in contact with nature. Without nature he can no longer do his work, for he knows deep inside that only nature can balance the functioning of the being. Therefore the shaman seeks to reestablish the link that connects the individual to nature, making him a specialist in the Lower World--a world that has been left behind by numerous spiritual traditions aligned toward the Heavens and the “elevation” of the soul. From a shamanic point of view it is totally absurd to want to “elevate” the soul without being firmly anchored to the earth, and that is why shamanic work generally begins by caring for and stabilizing the root (first) circuit of the being. Without nature, there is no shamanism, no life, no humanity.

For shamans, the renunciation of the Lower World, power animals, and nature is at the root of most human problems. This is why the healing shaman’s work is primarily with the root/somatic (first/fifth) circuit pair, which generally represents the wounded and uprooted part of the body and soul of the individual. The healing shaman’s first therapeutic action often involves bringing in their power animal for the people seeking their help.

Midwives participate in welcoming the being to Earth at the moment when its root circuit is malleable. Since the beginning of time they have played a fundamental shamanic role by accompanying mothers-to-be in the process of opening, leading to a harmonious delivery. It is natural that we find them beside healing shamans of the root/somatic circuit pair. In fact long before social functions became separated and compartmentalized, shamans and midwives were often one and the same person.

The politico-territorial/psychic (second/sixth) circuit pair is mobile, active, and expansive. It is a pair used by hunters, warriors, and explorer shamans. It corresponds to the Middle World, a world of great power in which the ego has a tendency to become encrusted. This is the world from which shamans draw their power, but also the world in which they must be cautious of issues of spiritual interference.

The spirits that help the shaman in the Middle World take on a multitude of forms. They generally live on the hidden, or non-ordinary, side of ordinary reality--the spirits of the elements (water, earth, fire, air), the spirits of nature, or the spirits of ancestors or the dead who have not yet moved on to the hereafter.

Unlike the power animals of the Lower World that graciously help the shaman, the spirits of the Middle World are not transcendental, but often ethnocentric or even egocentric. The power they give to the shaman must be used with vigilance because it is rarely without cost. In the Middle World it is “tit-for-tat.” This does not mean the Middle World is “evil” or “dangerous,” it simply works according to different rules than the Upper and Lower Worlds.

Finally the intellectual/mystic-religious (third/seventh) circuit pair corresponds to the Upper World, a shamanic world of knowledge and wisdom visited for millennia by the mystics of the great spiritual traditions from every continent. Within this world the visionary shaman comes into contact with the laws of the Universe and learns to live in harmony with them. He is at once prophet, diviner, and meditator.

Laurent Huguelit is a shamanic practitioner and teacher, founder of L’Outre-Monde center for shamanic practice, and member of the European faculty of the Foundation for Shamanic Studies, founded by anthropologist Michael Harner. He lives in Switzerland.

“The Shamanic Path to Quantum Consciousness offers deep insights into the diverse levels of human consciousness. Approached from the perspective of the ancient and now ever more popular philosophy of shamanism, it reaches a pinnacle at the eighth level with quantum consciousness--the same concept I identified using a scientific analysis to define the next development in the evolution of the human mind. This is a remarkable confluence of two entirely different perspectives.”

– Ervin Laszlo, Nobel Prize nominee and author of Science and the Akashic Field and The Self-Actualizi

“The work of Laurent Huguelit--cartographer of the psyche, explorer of the soul and invisible worlds--allows shamanism to become an evolutionary tool more accessible to our Western world.”

“The Shamanic Path to Quantum Consciousness is an excellent tool for mature readers who are also fans of Timothy Leary, those not necessarily needing a spiritual experience but wanting to explore their own minds and souls on a deeper level.”