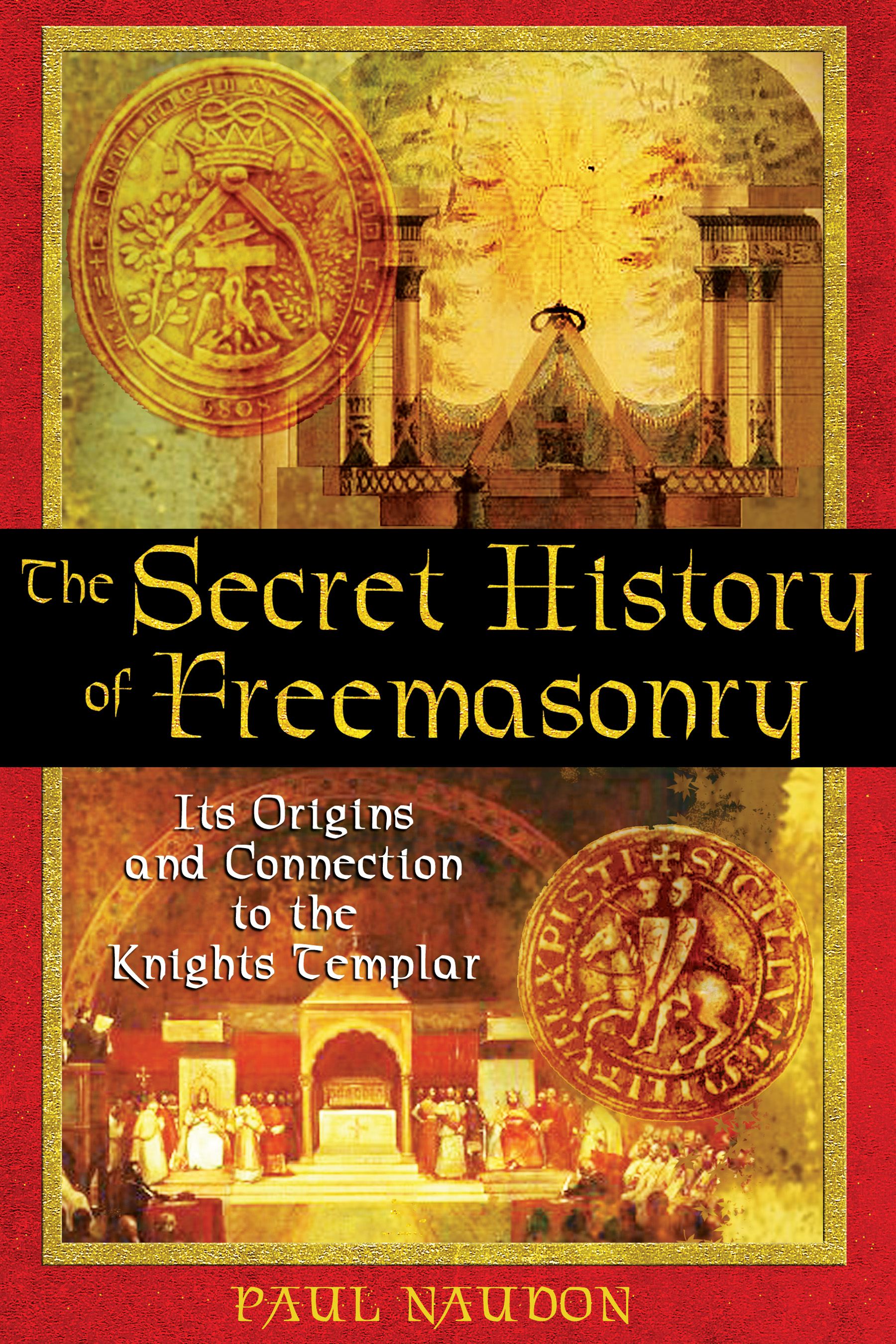 Explores the hidden history of Freemasonry from ancient Rome, through the Middle Ages, to the present

• Shows the close connection between medieval masons and the Knights Templar

• Illustrates the sacred nature of Roman and medieval trade associations

Historians often make a sharp distinction between the operative Masonry of the Middle Ages and the speculative Masonry of modern times, emphasizing that there is no direct bridge connecting the two. Modern historians also have scoffed at Masonic claims concerning the close relationship between the Lodge and the Temple. Using medieval archives housed throughout Europe, historian Paul Naudon reveals that there was in fact a very intimate connection between the Masons and the Knights Templar. Church records of medieval Paris show that most, if not all, the Masons of that time were residents of the Templar censive, which allowed them to enjoy great exemptions and liberties from both church and state as a result of the protection afforded them by this powerful order.

Naudon shows that the origins of Freemasonry can be traced back to the collegia of ancient Rome. He traces the evolution of organizations such as the Comacine Masters, the Arab turuqs, and the brotherhoods of builders created under the aegis of the Benedictines and the Knights Templar, all of which provide the vehicle for the transmission of a sacred tradition from pre-Christian times to the modern era. This tradition is the source of Masonic ritual and symbolism, and it provides the missing link in the transformation of the operative Masonry of the medieval cathedral builders to the spiritual principles of modern speculative Masonry.

Chapter 6--The Templars, the Francs Metiers, and Freemasonry

The Templars and the Master Builders

When the Templars extended their commanderies into Europe with the help of their Christian worker assistants, they brought the traditional rites and secrets of the Byzantine collegia and the Muslim turuq, which had much in common. The forms and ideas of these associations inspired and penetrated the "master associations" that were forming then and which the Templars used or guided for their constructions. These rites and customs combined with the remnants and symbols passed down by the brotherhoods of the early Middle Ages in the regions where memories of Roman and ancient times had never entirely disappeared.

Given the number and importance of their building projects, it is most likely that the Templars played a prominent role in the formation of these European "master associations." The Templars, just like the Benedictines, employed masons and carpenters in addition to their servant brothers. In each commandery these builders were under the direction of an officer of the Temple, the magister carpentarius. This individual, a veritable architect, taught the laborers working for the Order the art of building and geometry. Everyone contributed to the construction of Templar buildings. While remaining under Templar tutelage, however, these associations soon became more independent of the Order. They expanded their field of activity by working not only for the Templars but also for the inhabitants of their domains, which continued to develop in both population and wealth. The bond that tied the operatives to the Temple was now simply one of a manorial order. In this insecure time tradesmen flocked to the commanderies, where, in addition to its powerful protection, the Temple offered considerable advantages, including the right of asylum, the right of franchise, and fiscal privileges.

The Privileges of the Temple: Asylum and Franchise

Like the majority of religious orders, the Templars had the privilege of asylum, meaning that they could protect those individuals who sought refuge in their domains from any legal proceedings against them. One of the oldest legal documents that offers evidence of this is a papal bull from Innocent III dating from 1200 and stating that those who used violence against the colleagues and liegemen of the Temple who had entered into an area under God’s truce as preached by the Church would be excommunicated.
"The Bible of the Lord of Berze," a poem composed during the early years of the thirteenth century, expresses it as follows:

Dare not strike one of its knights
Its Sargents nor its squires
Threaten not to slay them
or to the Hospital he shall flee
Or to the Temple, if he can manage to do so.

The right of franchise was much more exceptional than the right of asylum. It is certain that the Benedictines, Cistercians, and Hospitaliers of Saint John of Jerusalem offered an equal measure, at least originally. This right of franchise allowed any craftsman to exercise any craft or commerce within the domain of the Temple, despite any rules of regulations promulgated by the sovereign authority of the nation or the city. The inhabitants of the Templar commanderies were also exempted from the majority of tariffs and taxes imposed by the king, the lord of the area, or the municipality. In Paris this is how they were able to avoid the corvee (the unpaid labor owed by peasants and bourgeois to their sovereign lord) and a very unpopular kind of servitude, the watch, something in which the bourgeois residents of Paris were compelled to participate. The trades that benefited from such franchises were known as the francs méstiers (free craftsmen).

It is perhaps within these privileged franc mestiers that we should place the origin of Freemasonry. Apparently, the term freemason was imported from England. In that country there are texts from 1376 and 1396 in which the word ffremasons or ffreemaseons appears for the first time. In reality, however, the English had borrowed the term from the French language, as is evidenced by its etymology. We should not forget that under the Norman monarchs and for three centuries following William the Conqueror’s victory at Hastings in 1066, the official language of England was French. The oldest statutes of English workers to have come down to us (from 1351 and 1356) were still written in French. Throughout the Middle Ages on into the Renaissance, French was also the international language of crafts and the esoteric language that craftsmen used. Thus it is in France where we actually must look to find the origin of this term.

In the Middle Ages the word franc served not only to qualify what was free in opposition to that which was servile and what bore the mark of purity and high quality, but it also and more specifically designated every individual or property that was exempt from manorial servitudes and laws. Thus a franc-alleu was a land completely owned as property and owing no lord any right, faith, homage, or investiture. Opposite the franc-alleu were the servile status and the fief that made its owner or lord a vassal to a suzerain. At the beginning of the fourteenth century, Boutillier wrote in his Somme rurale (1, 84): "[T]o hold as a franc-alleu is to hold land from God alone and owe neither cens, allowance, debts, service, nor any fee; the tenant holds the land freely from God." In the sixteenth century the legal counselor Guy Coquille proclaimed, "The franc-alleu is called free because it is not in the sphere of any landed lord’s influence." Among the different kinds of franc-alleu there was the franche-aumone, a land donated to the Church free of any charge. Because this property ceased to be dependent feudally upon a lord, its transfer could not be made with the consent of this lord.
Paul Naudon

Paul Naudon is a law scholar specializing in the history of civil law and institutions. He is also a Freemason who has held many high ranking posts in France, including that of Grand Prior of the Gauls (Rectified Scottish Rite) and State Minister for the Supreme Council of the Ancient and Accepted Scottish Rite. He lives in France.

"For hardcore aficionados of architecture and academics interested in the creation of social sacred space across time, this book is a must-read."

"Naudon's book is a historic tour-de-force . . . . Those intrigued with such books as The DaVinci Code will find in The Secret History of Freemasony the historic truths which underlie the novelists' free-wheeling sspeculations."

"A fascinating book for those with more than a passing interest in architecture as the conscious act of creating sacred space as well as an appreciation of Freemasonty as symbolising man's spiritual quest to build the unseen Temple of the Lord on earth."

". . . examines both Freemason history and spiritual concepts and how they changed form early to modern times. . . . fascinating and informative chapters covering everything from cooperative masonry associations to speculative masonry rituals."

"Readers interested in secret societies and Freemasonry will enjoy this well-written account. Those interested in the connection to the Knights Templar will find this must-reading! Highly enjoyable!"

“I learned more about the facts underlying Freemasonry in this one book than in a dozen others I have read. I highly recommend it to those who wish to learn more about this fascinating topic.”

"Naudon's book is an impressive work of scholarship grounded in fascinating ideas about sacred space, the rituals of building churches, cathedrals and temples, as well as the varied brotherhoods established to conduct what was once considered a divinely inspired activity."