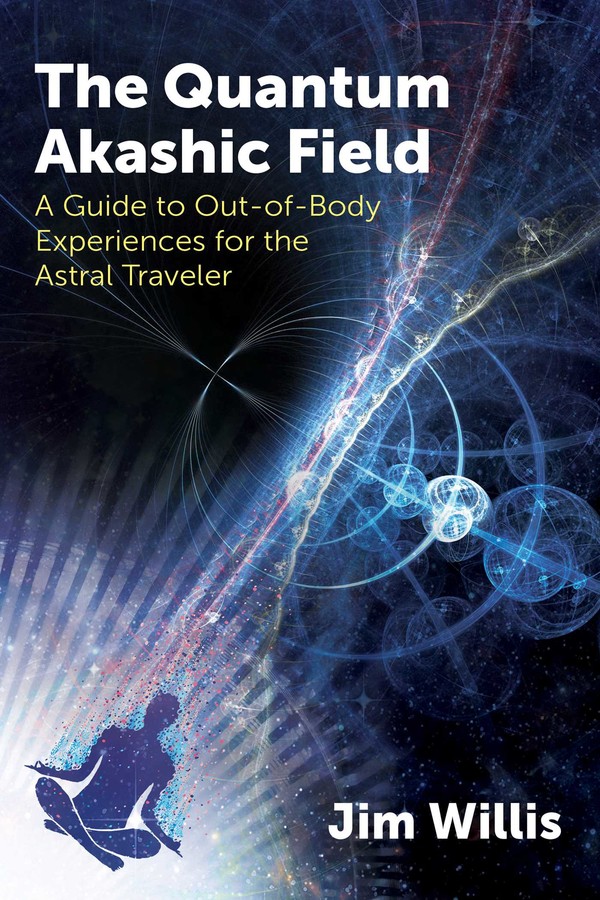 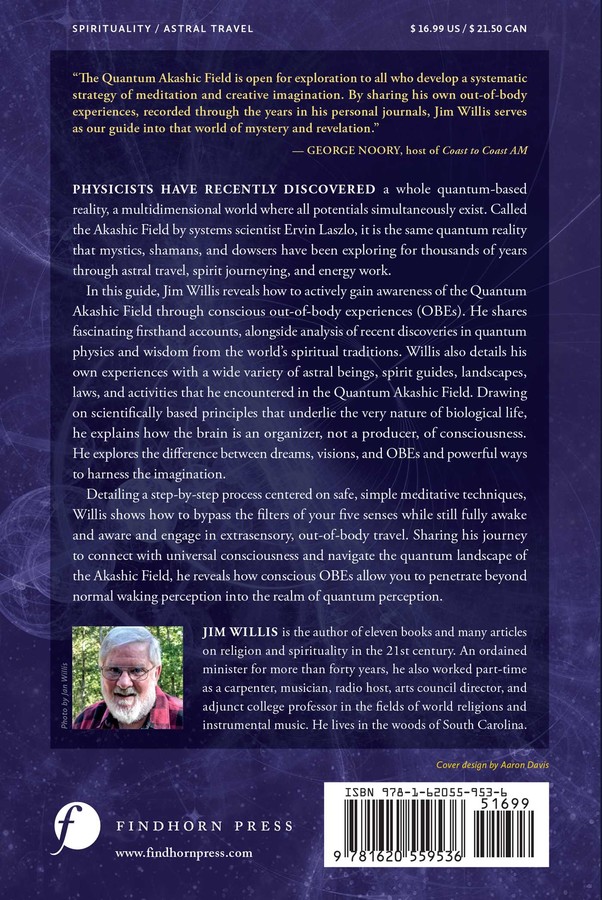 • Examines the quantum landscape of the Akashic Field, meetings with spirit guides, and descriptions of out-of-body experiences from the author’s personal journal and from world spiritual traditions, including the Bible and the Baghavad Purana

• Explores current theories about the science of consciousness and sensory perception, including discoveries from quantum physics, and how these discoveries align with the traditional wisdom of shamans, dowsers, and mystics

Physicists have recently discovered a whole quantum-based reality, a multidimensional world where all potentials simultaneously exist. Called the Akashic Field by systems scientist Ervin Laszlo, it is the same quantum reality that mystics, shamans, and dowsers have been exploring for thousands of years through astral travel, spirit journeying, and energy work.

Revealing how to gain awareness of the Quantum Akashic Field through conscious out-of-body experiences (OBEs), Jim Willis shares fascinating firsthand accounts taken from the detailed OBE journals he has kept for nearly 10 years, alongside analysis of recent discoveries in quantum physics and wisdom from the world’s spiritual traditions. He details his own experiences with a wide variety of astral beings, spirit guides, landscapes, laws, and activities that he encountered in the Quantum Akashic Field. Drawing on scientifically-based principles that underlie the very nature of biological life, he explains how the brain is an organizer, not a producer, of consciousness. He explores the difference between dreams, visions, and OBEs and powerful ways to harness the imagination.

Detailing a step-by-step process centered on safe, simple meditative techniques, Willis shows how to bypass the filters of your five senses while still fully awake and aware and engage in extrasensory, out-of-body travel. Sharing his journey to connect with universal consciousness and navigate the quantum landscape of the Akashic Field, he reveals how conscious OBEs allow you to penetrate beyond normal waking perception into the realm of quantum perception.

The Master Game involves the quest for spiritual awakening, enlightenment, and liberation. The goal is to discover one's own true nature and to know from direct, empirical experience that this nature is both sacred and immortal.
--Hank Wesselman in Visionseeker

What if someone were to tell you that your five senses of touch, sight, smell, hearing, and taste, important senses that have evolved to help you relate to and interact with the world around you, also serve as filters that cut you off from a true experience of the totality of reality? What if that person were to further explain that the scientific method, that marvelous, systematic, investigative technique that relentlessly explores, tracks down, measures, and describes the world around us, is insufficient to fully explain the nature of the cosmic ocean in which we live and move and have our very being? And what if you were to learn that almost everything you have been taught about reality is an illusion?

Would you accept it? Would you believe it? Would it change your life?

Most people would probably respond with an emphatic, “No! I'm doing just fine, thank you!”

But the fact that you chose to even begin reading this book proves you are probably not like most people.

You are curious. You sense that there is something going on beneath the surface of your day-to-day life. You have read enough to know that new discoveries in almost every scientific discipline are overturning the safe and comfortable story of existence that has been the staple of academic life for generations. You have watched enough of the History Channel on TV to begin to suspect that most religions, as practiced today, don't truly represent the teachings of their original founders. You have become aware that ancient texts, these days readily available via the Internet, offer puzzling enigmas and mysterious allusions which suggest that our distant ancestors seemed to be in touch with forces we have long forgotten--forces that may have atrophied due to disuse but still lie dormant deep within, waiting for us to access them.

In this book we're going to explore some of these ideas. Together, we will seek avenues that lead to a reality outside the normal perception realm of most contemporary experience. We'll discover that what most of us have been taught is insufficient. We'll try to penetrate to the essence of the freedom that lies just beyond our waking consciousness. Call it Quantum Perception.

When we, either by accident or intentional design, somehow bypass our senses while still fully awake and aware, we discover that consciousness is not a by-product of our brains. It doesn't originate in the brain at all. It is universal. The brain is an organizer, not a producer, of consciousness. It is more like a radio than a generator. Once we bypass the filters of our five senses and connect to universal consciousness outside our familiar sensory parameters, the effect can be staggering. We realize we are more than our bodies--that our bodies simply house our essence.

It's as simple, and as complicated, as that. Out of Body and Near Death Experiences occur when we are able to do an end run around our highly evolved sensory filters. When we escape the prison of our senses we achieve freedom. All that is becomes accessible. We have penetrated the quantum realm.

Let me share an entry from a dream journal that I've kept on and off for years:

I’m fully alert, even though my body is relaxed. I try to remain calm and patient so as to let things unfold at their own rate. An image pops into my mind, totally unbidden. It’s a picture of a monkey, hopping up to a window in his cage. I notice that the window is open. There’s nothing to stop the monkey from jumping outside. I immediately interpret that as meaningful. I am the monkey and I can leave my cage--my body.

Then the scene changes. I see a gate--iron bars standing between stone pillars. But the gate is open. I can walk through if I want. After some mental struggle I stand at the open gate and gaze out unto a magnificent vista. Way below me is a whole universe of towns and villages. I ask to change into a hawk so I can fly over the whole thing and see it from above. When that doesn’t happen I ask to fall into it--toward it. I await some spectacular result.

But then it occurs to me that even this, as magnificent as it is, is a mental construct of my own. So I ask to see Reality, not my own idea of reality. Suddenly the whole image rolls up like a scroll. For just a second I stare into a huge nothingness. I experience it as music--walking into music. For one, brief moment, I am aware of a tremendous pulsing throughout the core of my body. My heart and chest are pulsing--there is no other word that quite describes it. It’s not uncomfortable at all. If anything, it's just the opposite. The feeling is wonderful. I feel it, and am conscious that I am feeling it, and it feels profoundly peaceful. I really don’t want it to end, but I realize that my journey for today is almost over. I went a little farther than ever before, and have the feeling that’s the way it’s going to be. Each day, one more step. Gradually. Inch by inch.

Unseen worlds glimpsed in dreams and visions comprise the very realms, spruced up with newly minted scientific vocabulary, that shamans, dowsers, and mystics have been exploring for thousands of years. And it’s closer than you can imagine!
Jim Willis

Jim Willis is the author of 11 books on religion and spirituality in the 21st century, including Supernatural Gods, along with many magazine articles on topics ranging from earth energies to ancient civilizations. He has been an ordained minister for over forty years while working part-time as a carpenter, musician, radio host, arts council director, and adjunct college professor in the fields of world religions and instrumental music. He lives in the woods of South Carolina.

“The Quantum Akashic Field is open for exploration to all who develop a systematic strategy of meditation and creative imagination. By sharing his own out-of-body experiences, recorded through the years in his personal journals, Jim Willis serves as our guide into that world of mystery and revelation.”

– George Noory, host of Coast to Coast AM

“Jim Willis, through a combination of modern science and very personal experience, manages to produce a veritable DIY guide for anyone interested in out-of-body experience (OBE). This book should cause the steadfast nonbeliever to admit that there is at least a scientifically based possibility that the OBE phenomenon is plausible and provides validation as well as explanations and encouragement for those who have experience with OBEs. If ever there was a successful explanation for the inexplicable, this book is it.”

“Willis weaves together science, metaphysics, and cultural references in a thoughtful exploration of the out-of-body experience. Using his fascinating and highly symbolic personal experiences, he gently but logically guides us to see that OBEs are a natural part of our spiritual development. This book is a great summary of the basics, with inspiring personal examples, encouragement, and practical guidance that is both useful for the beginner and a valuable refresher for those looking to enhance their experience.

– William Buhlman, author of Adventures Beyond the Body

“Another brilliant book by Jim Willis. How he manages to make complex concepts so easily accessible, I don’t know. Read it at your own risk!”

“Combining cutting-edge theories, mysticism, and personal narratives, Jim Willis provides a fascinating overview of the out-of-body experience. Willis seamlessly makes connections between such diverse topics as perception, consciousness, philosophy, shamanism, and quantum physics, which challenges readers to look beyond their present assumptions about who and what they really are.”

– Paul J. Leslie, author of The Art of Creating a Magical Session

“This is a very dangerous book. With his ability to tell a good story, Jim Willis can draw you right out of your body and into the astral planes. So, if you choose to read it, don’t say you haven’t been warned.”

“Accessing the fabled Akashic records has always been a curiosity of mine, and in his book The Quantum Akashic Field Jim provides a fun and easy-tounderstand guide for exploring this sacred domain.”

“Jim Willis has written a wonder-filled, magical book. Thoroughly acquainted with the theoretical principles of the new physics and how they relate to the problem of consciousness, he offers sage practical advice on how to achieve a conscious out-of-body experience and navigate the challenging terrain of nonordinary states of consciousness. . . . Marinated in the narrow, intellectualistic rationalism of our mainstream Western culture and an equally narrow and dogmatic fundamentalist form of Christianity, Willis shares how he managed to free himself from these mental prisons and experience ever-wider, more expansive and inclusive states of awareness.”

– Joseph M. Felser, Ph.D., author of The Way Back to Paradise and The Myth of the Great Ending

“This is an entertaining account of the author’s exploration of the Akashic Field. Jim Willis shows us how we can gain awareness of this quantum-based reality through conscious out-of-body experiences. Although these experiences feel supernatural, they are rooted in simple, scientific principles…”