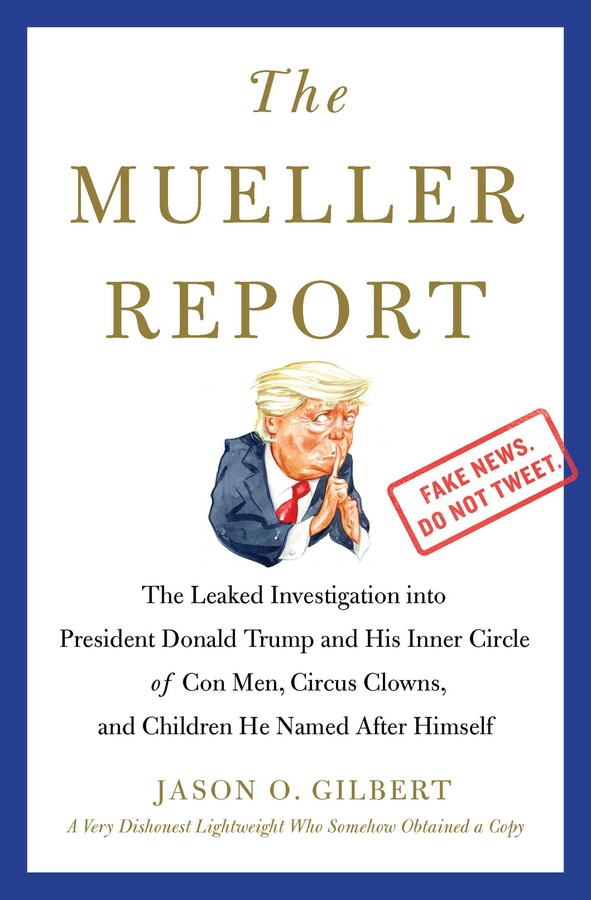 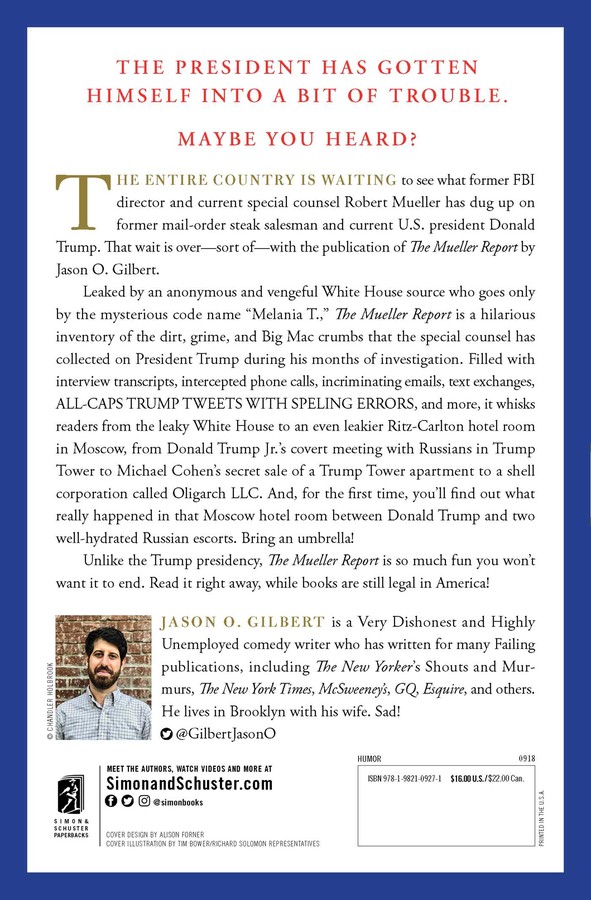 The Leaked Investigation into President Donald Trump and His Inner Circle of Con Men, Circus Clowns, and Children He Named After Himself

The president has gotten himself into a bit of trouble.

The entire country is waiting to see what former FBI director and current special counsel Robert Mueller has dug up on former mail-order steak salesman and current US president Donald Trump. The wait is over—sort of—with the publication of The Mueller Report by Jason O. Gilbert.

Leaked by an anonymous and vengeful White House source who goes only by the mysterious code name “Melania T.,” The Mueller Report is a hilarious inventory of the dirt, grime, and Big Mac crumbs that the special counsel has collected on President Trump during his months of investigation. Filled with interview transcripts, intercepted phone calls, incriminating emails, text exchanges, ALL-CAPS TRUMP TWEETS WITH SPELING ERRORS, and more, it whisks readers from the leaky White House to an even leakier Ritz-Carlton hotel room in Moscow, from Donald Trump Jr.’s covert meeting with Russians in Trump Tower to Michael Cohen’s secret sale of a Trump Tower apartment to a shell corporation called Oligarch LLC. And, for the first time, you’ll find out what really happened in that Moscow hotel room between Donald Trump and two well-hydrated Russian escorts. Bring an umbrella!

Unlike the Trump presidency, The Mueller Report is so much fun you won’t want it to end. Read it right away, while books are still legal in America!

The Mueller Report INTRODUCTION
To the American People:

I am the leaker of the report you are about to read.

While I cannot divulge my true identity, I am someone who sees the President every morning and night; who has known the President for the past two decades; and who is present for many of his tantrums, outbursts, and extended rants about Chuck Schumer.

I can’t say my full name, for it might jeopardize my relationship with the President.

I had been saying for years that I wished Donald Trump was in prison. And so when I heard that Special Counsel Robert Mueller had been appointed to investigate President Trump, I knew immediately that I wanted to help. But how?

I had much to offer, given my proximity to Donald. Would Mr. Mueller want the President’s credit card statements from the Moscow airport Sbarro? Would he want an exceptional amount of hair from his shower drain? What about a recording of the President discussing Russia with his two most trusted advisors: Geraldo Rivera and Chumlee from Pawn Stars?

I contacted Mr. Mueller—again, using only my pseudonym, Melania T.—and became his investigation’s secret source: the Deep Throat of the Mueller investigation.

At first, my spycraft turned up nothing. I recovered the President’s legal pad from a meeting with the White House Commission on Science and Technology, but it only contained a crude stick figure drawing of Bo Derek with the phrase “Time travel?”

Next, I recovered his notes following a cabinet meeting about the Iran deal. This, too, proved a bust, as his notes were just a list of ideas for nicknames to call Keith Olbermann on Twitter.

For several months I turned up nothing of use for Mr. Mueller, even though the President had become quite careless. On a trip to Asia he attempted to order an adults-only pay-per-view to his hotel television but instead of calling the front desk, he left a voice mail for Glenn Thrush at the New York Times.

For three confusing minutes in September 2017 the President accidentally appointed Scott Baio as chief justice of the Supreme Court. In October 2017 the President hung up on the prime minister of Australia after he refused to “hand over his country’s secret recipe for the Bloomin’ Onion.”

“I thought we were ALLIES!” the President screamed, slamming down the receiver.

But I refused to give up. We have a saying in my native Slovenia: “It is the persistent and cunning wolf who catches the strutting, spray-tanned chicken.”

And by God did I want to catch that chicken.

So I kept funneling information to Mr. Mueller. I had full access to the White House since the President was never there on weekends. I forwarded documents left in printers, and Filet O’ Fish wrappers, and receipts for $19 iced teas from the Trump International Hotel Bar & Grill.

And then one night in the summer of 2018 I was in the President’s bedroom and I had a hunch that something was up.

The President had been in an irritable mood; that morning he had accidentally retweeted seven accounts that all turned out to be either neo-Nazis or Piers Morgan. The Washington Post had run a story showing his average approval rating was somewhere in between gas station empanadas and the ending of Lost. He had been lashing out all day, and he could not even be cheered up by his nightly phone call in which Sean Hannity soothingly sings “You Are My Sunshine.”

I received my signal from Mr. Mueller: a text message that read “DEEP STATE.” The President was fast asleep, which I can always tell because he was sleep-talking about “fake news Wolf Blitzer.”

Just to be extra sure, I said out loud, “Honey! Jeff Bezos is here. He wants to apologize for pretending to have more money than you and for generally being an inferior businessman.”

But he did not move. That meant he was out cold.

I had to sneak out of the White House without anyone knowing. Luckily the President had fired the longtime chief of White House security and replaced him with a 23-year-old Trump supporter whose previous security experience was checking IDs at a T.G.I. Friday’s in Whitefish, Montana.

I tiptoed through the halls of the White House. It was around midnight; I saw no one except for Stephen Miller, wearing a cloak and reciting a German poem to a portrait of Andrew Jackson. He did not notice as I crept by him, out into the night.

I met Mr. Mueller at our usual spot, a place we knew that no one in the Trump administration would ever visit: the National Museum of African American History and Culture.

Mr. Mueller told me he suspected that he would soon be fired, and that if he was, he wanted to get something out into the world. He handed me the following documents and gave me instructions to put it in the hands of a writer that no one was interested in: not the FBI, not the CIA, not any readers.

I googled “unemployed writer + no prospects + looks like he cuts his own hair” and the first four pages of results all pointed to Jason O. Gilbert. I thank him for shepherding this report into the world and hope that he soon purchases some clothing that does not feature visible Cholula stains.

As you will see, the documents are mostly raw materials: interview transcripts, meeting notes, emails, and other communications filed into evidence by Robert Mueller and his team of investigators. Due to Mr. Mueller’s worries about imminent termination, the report is in no way comprehensive.

Disappointingly, the report does not reach a conclusion about criminal activities of either Mr. Trump, his associates, or his children. I will not state one, either. Though I am an expert on many subjects—fake smiling while holding hands in public with someone you dislike; feigning interest in stories about going to Studio 54 with Roy Cohn—collusion is not one of them.

Still, I hope you will read these documents and draw your own conclusions. Mr. Mueller and I have risked much to bring you this report. But take it from someone who has watched the President attempt to launch preemptive military action against an episode of Jimmy Kimmel Live!: the risk of inaction is much greater.

Jason O. Gilbert is a humor writer whose work has been published in The New Yorker’s Shouts and Murmurs, The New York Times, McSweeney’s, GQ, Esquire, and many more failing publications. He has also written comedy for HBO’s Vice News Tonight, the game show HQ Trivia, and his Twitter account, which has more than 40,000 followers. He lives in Brooklyn with his wife. Sad!

The Leaked Investigation into President Donald Trump and His Inner Circle of Con Men, Circus Clowns, and Children He Named After Himself