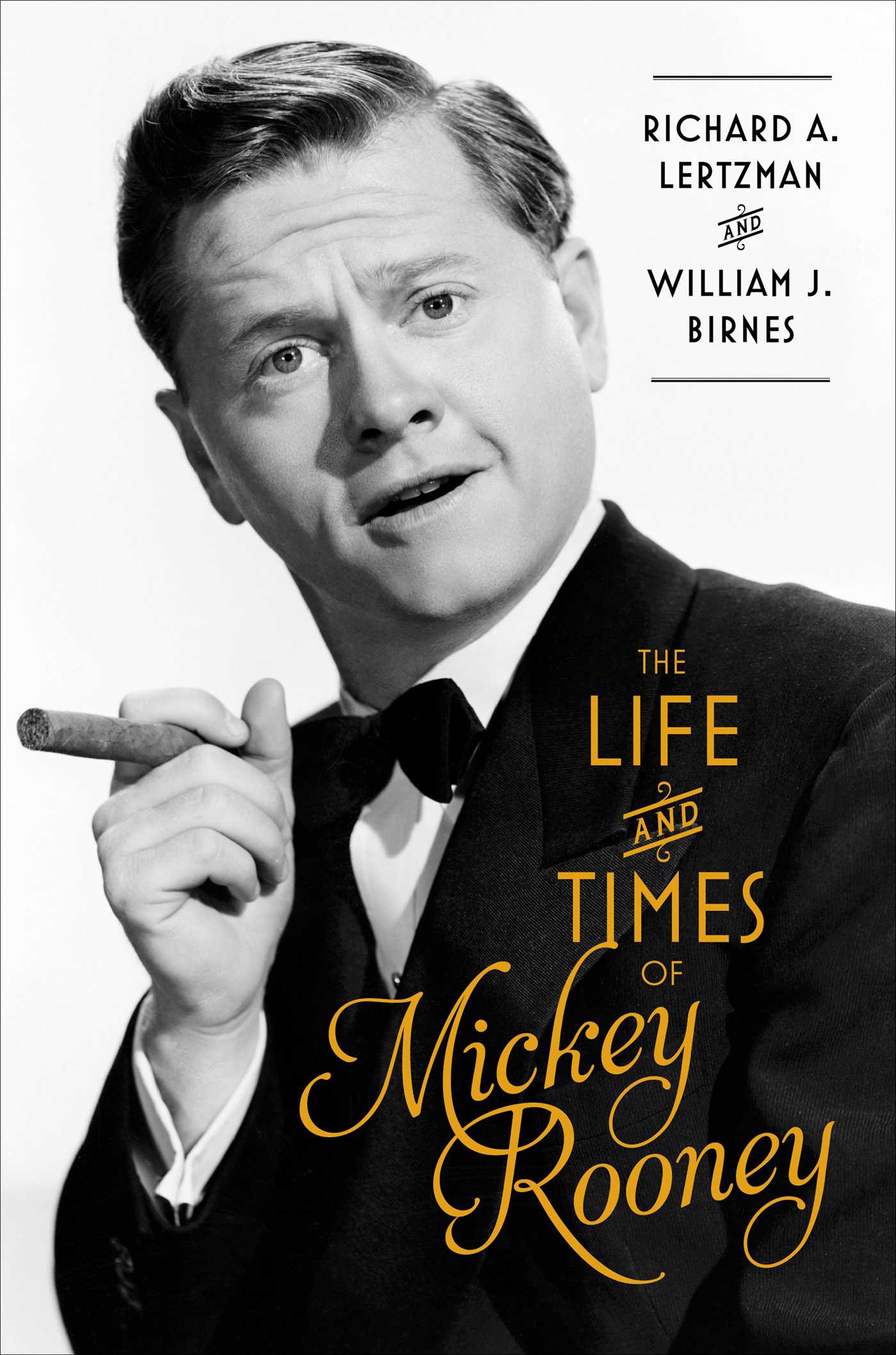 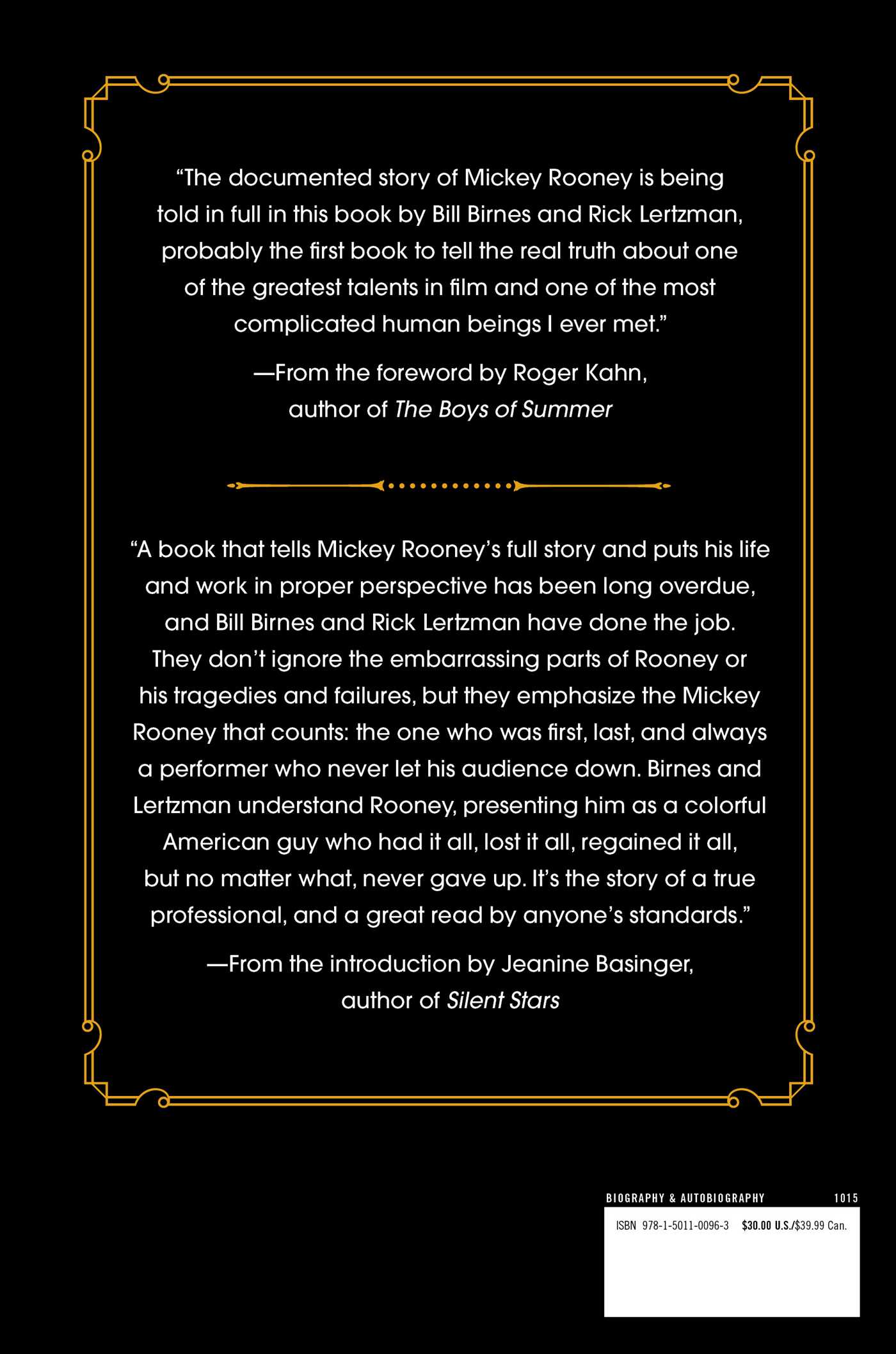 By Richard A. Lertzman and William J. Birnes
LIST PRICE $30.00
PRICE MAY VARY BY RETAILER

A definitive biography of the iconic actor and Hollywood legend Mickey Rooney (1920-2014) and his extravagant, sometimes tawdry life, drawing on exclusive interviews, and with those who knew him best, including his heretofore unknown mistress of sixty years.

“I lived like a rock star,” said Mickey Rooney. “I had all I ever wanted, from Lana Turner and Joan Crawford to every starlet in Hollywood, and then some. They were mine to have. Ava [Gardner] was the best. I screwed up my life. I pissed away millions. I was #1, the biggest star in the world.”

Mickey Rooney began his career almost a century ago as a one-year-old performer in burlesque and stamped his mark in vaudeville, silent films, talking films, Broadway, and television. He acted in his final motion picture just weeks before he died at age ninety-three. He was an iconic presence in movies, the poster boy for American youth in the idyllic small-town 1930s. Yet, by World War II, Mickey Rooney had become frozen in time. A perpetual teenager in an aging body, he was an anachronism by the time he hit his forties. His child-star status haunted him as the gilded safety net of Hollywood fell away, and he was forced to find support anywhere he could, including affairs with beautiful women, multiple marriages, alcohol, and drugs.

In The Life and Times of Mickey Rooney, authors Richard A. Lertzman and William J. Birnes present Mickey’s nearly century-long career within the context of America's changing entertainment and social landscape. They chronicle his life story using little-known interviews with the star himself, his children, his former coauthor Roger Kahn, collaborator Arthur Marx, and costar Margaret O’Brien. This Old Hollywood biography presents Mickey Rooney from every angle, revealing the man Laurence Olivier once dubbed “the best there has ever been.”

The Life and Times of Mickey Rooney Introduction by Jeanine Basinger
Mickey Rooney had talent to burn, and he burned it. He lived a long and often messy life, going up and down the ladder of success as if it were a department store elevator. He did everything there was to do in show business: vaudeville, radio, nightclubs, theater, television, and of course movies, where he ranked at the top of the box office in 1939, 1940, and 1941. He could perform both comedy and drama equally well, and he did impressions of everyone from Franklin Delano Roosevelt to Carmen Miranda. He sang, he danced. He played the piano, the drums, and the banjo, and he composed music. He also wrote books, taught acting, spearheaded various business ventures, and served his country during World War II, earning the Bronze Star for performing in combat zones.

When he died at age ninety-three in April of 2014, Rooney had been working in some form of entertainment for nine decades. Along the way, he won an Emmy, two Golden Globes, and racked up countless nominations for others, including two Oscar bids for Best Actor and two more for Best Supporting Actor. He had also been awarded two honorary Oscars, the first in 1939, for “bringing to the screen the spirit and personification of youth,” and another in 1983, “for his 60 years of versatility in a variety of memorable performances.” The latter award seemed at the time to close the book on Rooney, acknowledging the man who had been performing for more than sixty years. Yet Rooney carried on for another three decades. He died with his boots on, leaving behind small roles in two unreleased movies: Night at the Museum: Secret of the Tomb (2014) and Dr. Jekyll and Mr. Hyde (2015).

Rooney’s success is a unique American tale. He wasn’t necessarily the type for box office stardom. Standing only a little more than five feet, two inches tall, with a boyish face, a shock of untamable hair, and a sort of “gosh, darn” demeanor, he might have been limited to a brief career or no career at all, but his prodigious talent transcended his limitations. He proved to be a performance Everyman who could play a wide variety of roles: a maniacal Puck in A Midsummer Night’s Dream (1935); a heartbreaking Western Union messenger who delivers the World War II telegrams that announce the deaths of young soldiers in The Human Comedy (1943); the roustabout jockey who helps an adolescent Elizabeth Taylor ride to victory in National Velvet (1944); the down-on-his luck drummer in the underrated The Strip (1951); a doomed GI in The Bold and the Brave (1956); the psychopathic killer in Baby Face Nelson (1957), which won him the French César Award; a sympathetic boxing trainer in Requiem for a Heavyweight (1962); the elderly and sensitive horseman of Black Stallion (1979); and the mentally handicapped man in the TV movie Bill (1981). Even the horror of his now-politically incorrect Mr. Yonioshi in Breakfast at Tiffany’s (1961) is somehow fascinating. Yet even without any of these standout roles, Mickey Rooney would be an important part of film history.

If he had made only musicals with Judy Garland or just his sixteen-movie series as Andy Hardy, he’d still be famous. Rooney and Garland were young and hopeful together, and the wow factor of the energetic talent they unleash in such movies as Babes in Arms (1939) and Girl Crazy (1943), among others, is unparalleled. Rooney said, “Judy and I were so close we could’ve come from the same womb,” and this instinctive sympathy, rhythmic harmony, and mutual survival skills infuse all the numbers they perform. They sing it sweet and they sing it hot, but they are always amazing. And as to his embodiment of Andy Hardy, Rooney is immortal.

Despite the fact that he was chasing girls, gambling, drinking, and carousing off-screen while he made films, on-screen Rooney perfectly captures the spirit of an American teenager of the late 1930s and early 1940s. Andy Hardy is often called a fantasy figure, the imaginary kid MGM envisioned to goose up its box office receipts. The character is far more honest and believable than that, or else the low-budget series built around him would never have lasted. There may be hokeyness in the Hardy family stories, but there’s also something audiences recognized as true, and that truth was in Mickey Rooney’s performance.

With so many well-remembered film roles across so many decades, it makes one wonder why Mickey Rooney wasn’t more respected in his elder years. For Rooney, there was no Kennedy Center Honors award, no American Film Institute Life Achievement Award, and certainly no luxurious retirement to a villa in Switzerland. (He left only eighteen thousand dollars in his estate.) The older Rooney was always just a little bit over the top, lacking what Hollywood thought was class. He went bankrupt, became addicted to sleeping pills, and ran up gambling debts. He incited lawsuits, quarreled with his family, and often gave crazy interviews that went way beyond what could be labeled as merely eccentric. Most spectacularly of all, he married a legendary (and tacky) eight times. (“Always get married in the morning,” he was quoted as saying. “That way if it doesn’t work out, you haven’t wasted the whole day.”) These very public peccadillos no doubt kept him off the A-list of Hollywood legends—except, of course, where it counted: in the history books and in the hearts and memories of his fans.

A book that tells Mickey Rooney’s full story and puts his life and work in proper perspective has been long overdue, and Bill Birnes and Rick Lertzman have done the job. They don’t ignore the embarrassing parts of Rooney or his tragedies and failures, but they emphasize the Mickey Rooney that counts: the one who was first, last, and always a performer who never let his audience down. Birnes and Lertzman understand Rooney, presenting him as a colorful American guy who had it all, lost it all, and regained it all, but no matter what, never gave up. It’s the story of a true professional, and a great read by anyone’s standards.

Jeanine Basinger is the Corwin-Fuller Professor of Film Studies, Wesleyan University, and trustee emerita at the American Film Institute.

Richard A. Lertzman, with William J. Birnes, coauthored Dr. Feelgood, which garnered wide publicity in the United States. Lertzman is the former editor and publisher of Screen Scene magazine. 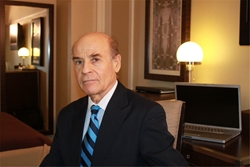 William J. Birnes, PhD, publisher of UFO Magazine, is the coauthor of the New York Times bestseller The Day After Roswell with the late Lt. Col. Philip J. Corso; the coauthor of The Riverman and Signature Killers with Robert Keppel, PhD; and the editor-in-chief of The McGraw-Hill Personal Computer Programming Encyclopedia. Dr. Birnes lives in Los Angeles and New York with his wife, novelist Nancy Hayfield.

"Covers everything...Lertzman and Birnes are deeply and appropriately sympathetic biographers."

"A definitive biography of Hollywood legend Mickey Rooney...[T]his is a page-turner; many of the people portrayed are long gone, but there's enough tell-all entertainment to keep almost any reader pushing through."

"Richard A. Lertzman and William J. Birnes have done their homework...If you’re looking for the definitive book on Mickey Rooney, this is it."

"Lertzman and Birnes understand Rooney, presenting him as a colorful American guy who had it all, lost it all, regained it all, but no matter what, never gave up. It’s the story of a true professional, and a great read by anyone’s standards."

By Richard A. Lertzman and William J. Birnes
LIST PRICE $30.00
PRICE MAY VARY BY RETAILER