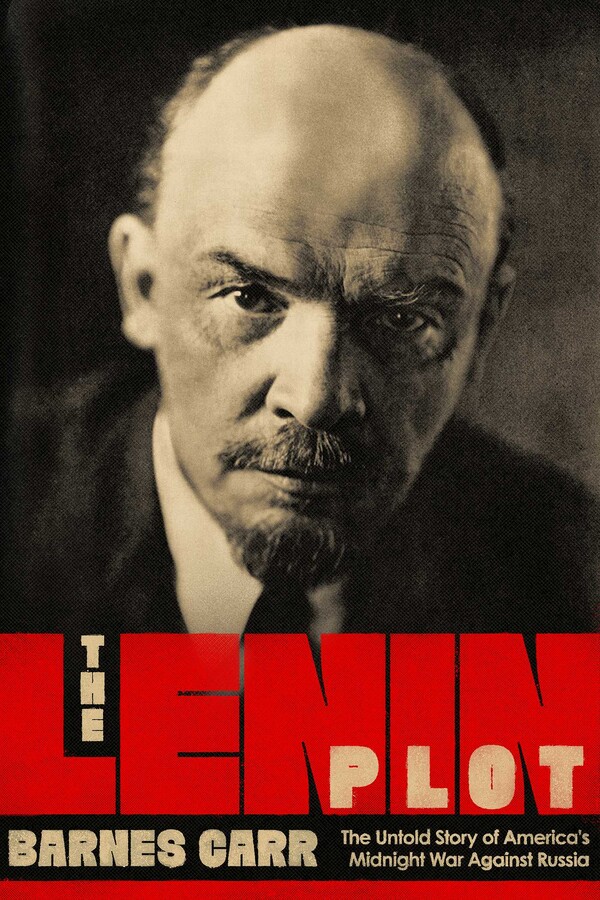 It remains the most audacious spy plot in American history—a bold and extremely dangerous operation to invade Russia, defeat the Red Army, and mount a coup in Moscow against Soviet dictator Vladimir Ilich Lenin. After that, leaders in Washington, Paris, and London aimed to install their own Allied-friendly dictator in Moscow as a means to get Russia back into the war effort against Germany. The Lenin Plot had the “entire approval” of President Woodrow Wilson. As he ordered a military invasion of Russia, he gave the American ambassador, the U.S. Consul General in Moscow, and other State Department operatives a free hand to pursue their covert action against Lenin. The result was thousands of deaths, both military and civilian, on both sides. A must-read for anyone seeking to understand the true beginning of the Cold War, The Lenin Plot tells the shocking story of this untold episode in American history in fascinating and striking detail.

Barnes Carr was for many years a journalist for daily newspapers in Mississippi, Memphis, Boston, Montreal, New York, New Orleans, and Washington, D.C. He was trapped in New Orleans during Hurricane Katrina and the short story he wrote about the experience was awarded a William Faulkner Gold Medal. His first book, Operation Whisper: The Capture of Soviet Spies Morris and Lona Cohen, was published by the University Press of New England. Barnes lives in Houston, Texas.

"Carr's revealing book upends notions of the Cold War, showing that it began earlier than assumed — as soon as the Bolsheviks took over — and that it wasn’t always cold: In 1918, America led a failed military intervention to oust the Communists. 'One would be hard pressed to find anything about this conflict in official United States documents, or even American military history books, which makes Barnes Carr’s entertaining new study, The Lenin Plot, a welcome corrective,' Victor Sebestyen writes in his review. 'The story is vividly told by Carr, who has unearthed some fascinating new archival sources to add to a sparkling narrative.'”

"Some reads like history, some like a spy novel, and it’s always eye-opening. A well-crafted exposé that suggests that the Cold War began half a century earlier than we’ve been told."

"This is a worthwhile read about little-known history."

“[A] forensically researched and at times gripping new contribution to the annals of twentieth century espionage.”

"Takes us back to the golden age of Soviet spies in America, when the ideology was stark, the tradecraft basic, and the stakes were as high as they come: the Atomic bomb."

– Naveed Jamali, former double agent and author of 'How to Catch a Russian Spy' [praise for Operation Whisper]

"A swift narrative that transports the reader through wars, revolutions, and major espionage operations of the twentieth century. An outstanding achievement."

– Gary Kern, author of 'The Kravchenko Case: One Man’s War on Stalin' [praise for Operation Whisper]

“This book fills in a gap in the annals of Soviet espionage. Goes to show you that the old saying ‘Don't judge a book by its cover’ is very true. Those (honestly) nice people served an evil cause. As much as it might pain one to say that, consequently, they were evil themselves, it is the hard truth.”

“Barnes Carr’s Operation Whisper reads like a thriller but is also a fact-filled, illuminating, and sometimes surprising study of real-life atomic spies Morris and Lona Cohen. A must for anyone interested in the history of Cold War espionage.”

– Richard B. Spence, author of 'Trust No One: The Secret World of Sidney Reilly' [praise for Operation Whisper]

“Illuminating and utterly enthralling. This is the first full biography of Morris and Lona Cohen, the New York couple who became the Soviet Union’s most devastating illegal spies.”

– Vin Arthey, author of 'Abel: The True Story of the Spy They Traded' [praise for Operation Whisper]