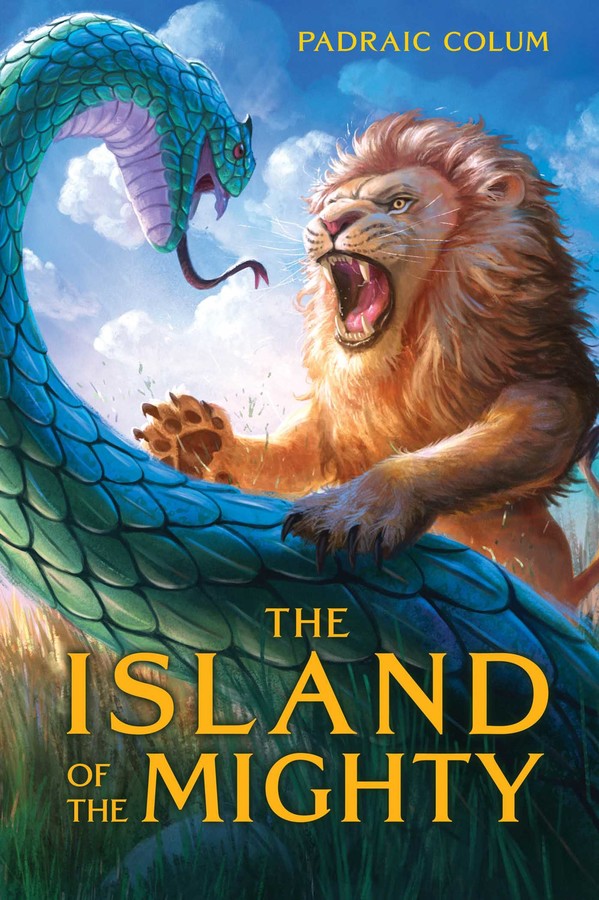 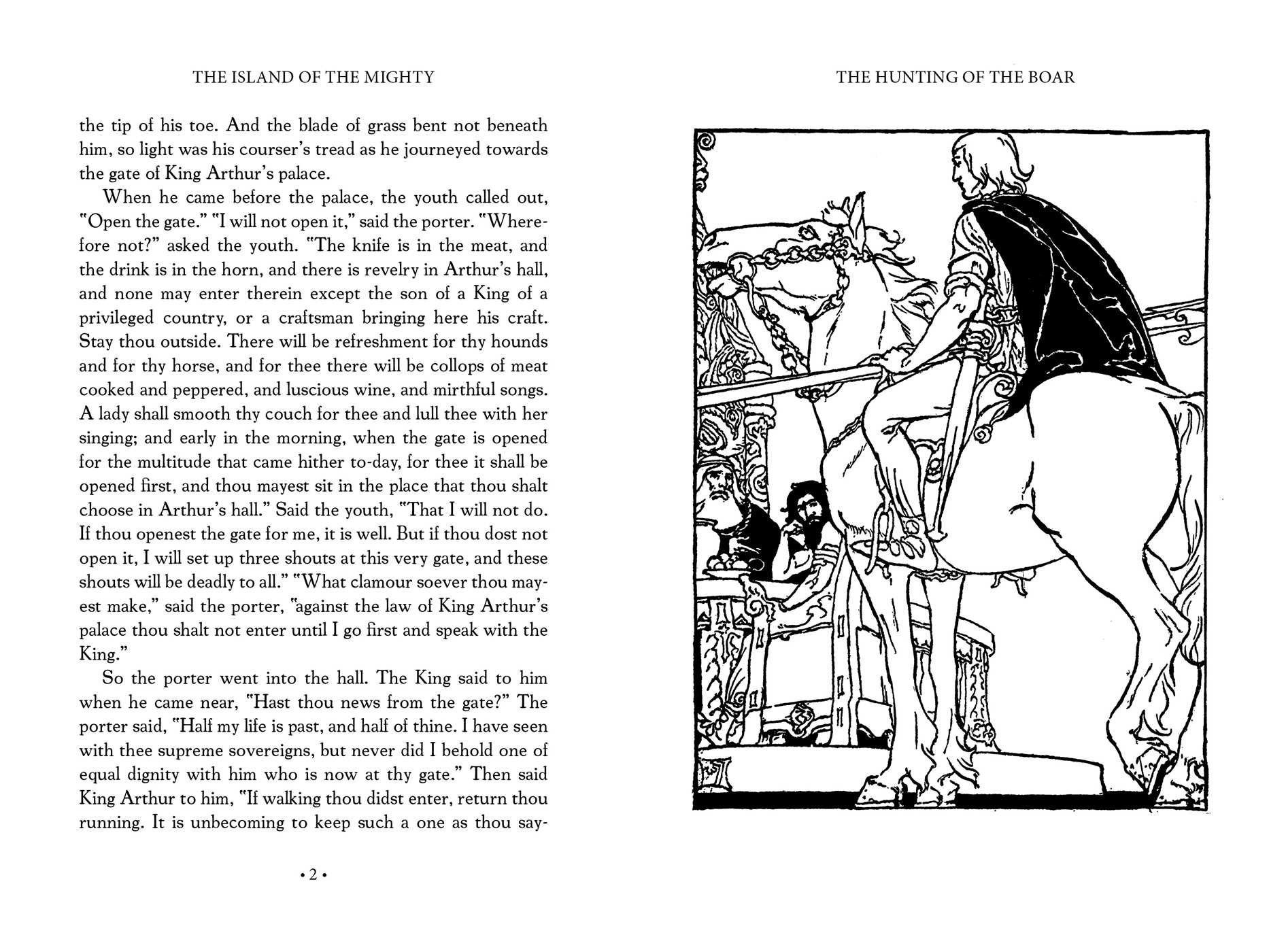 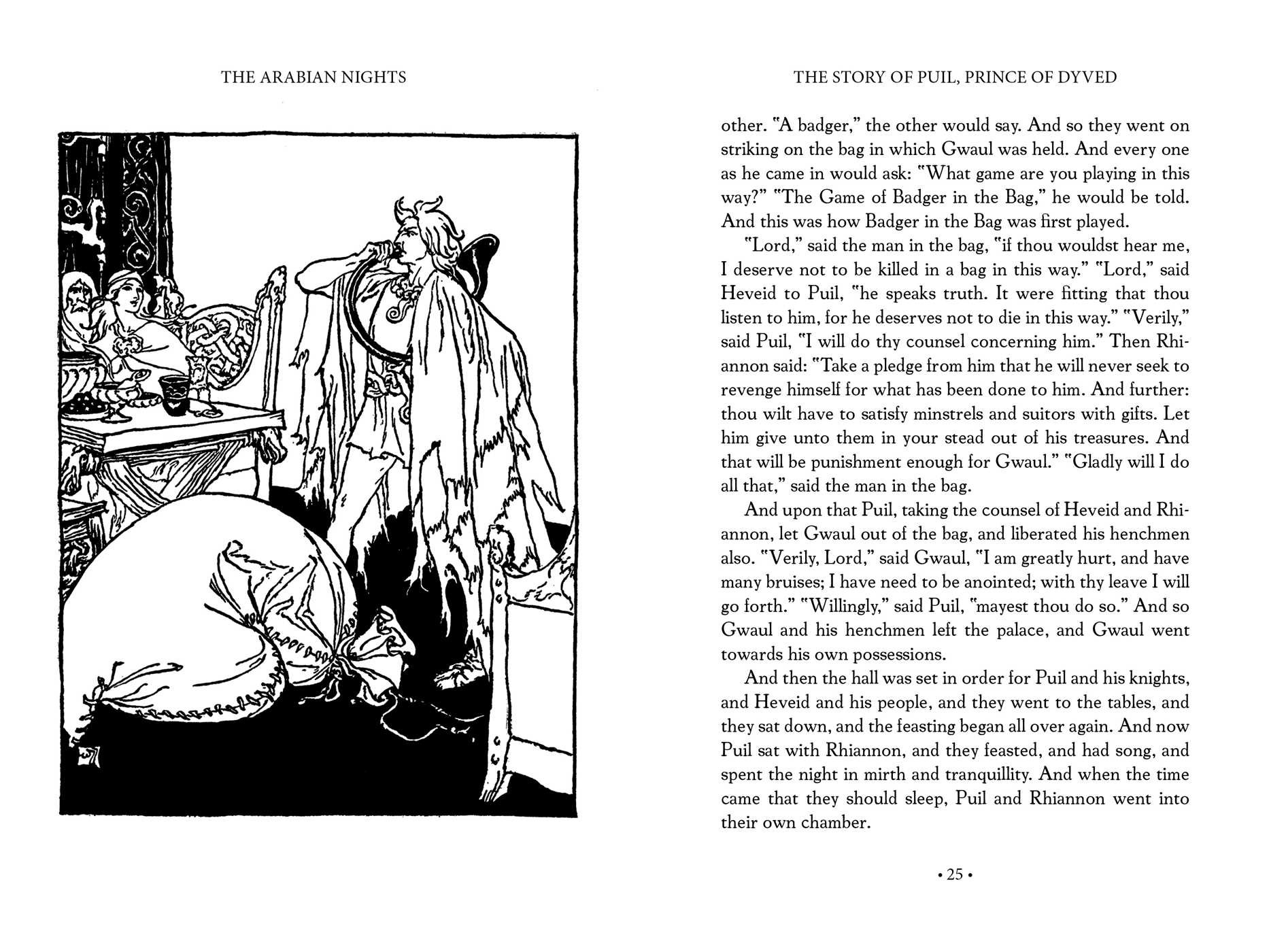 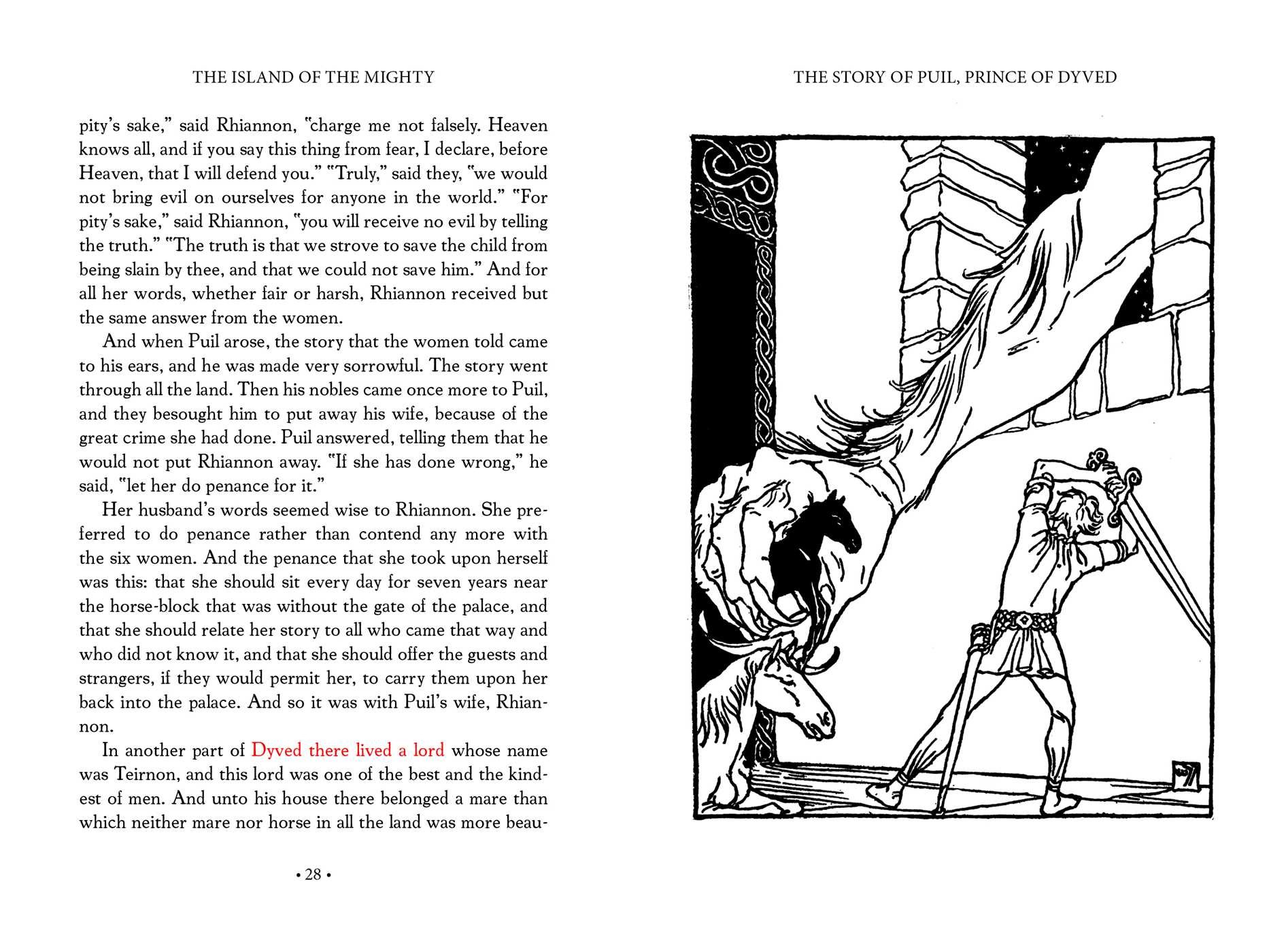 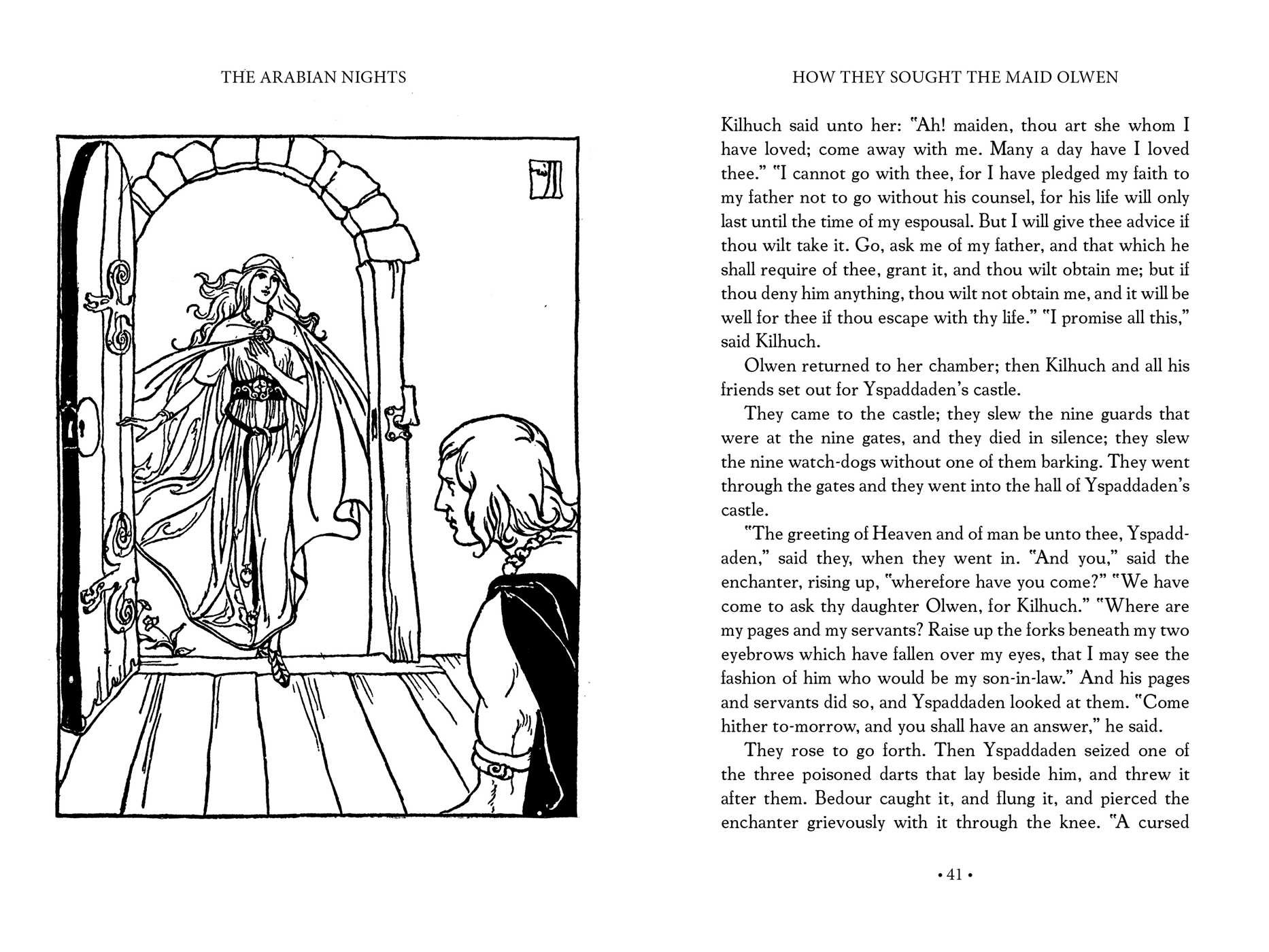 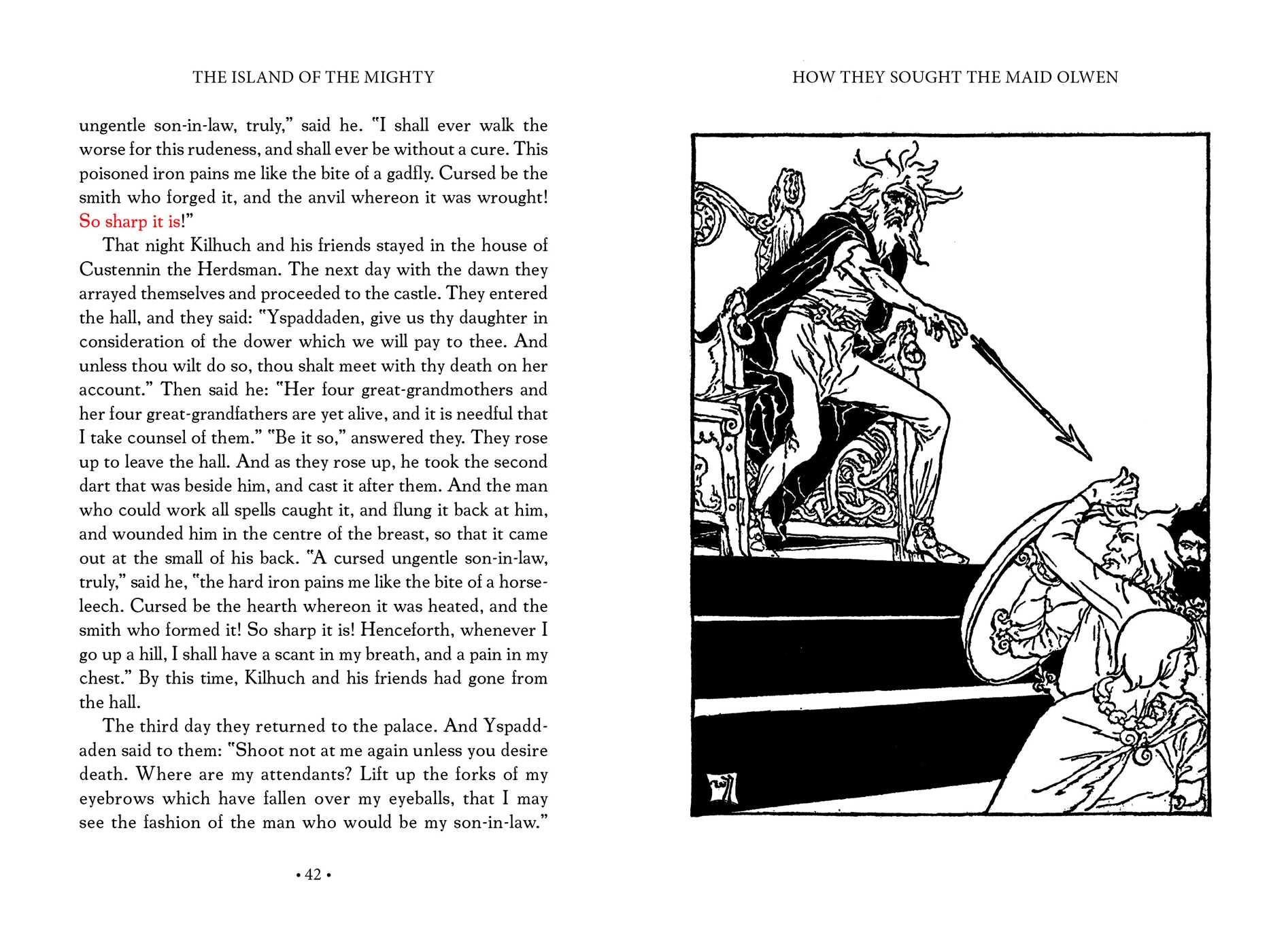 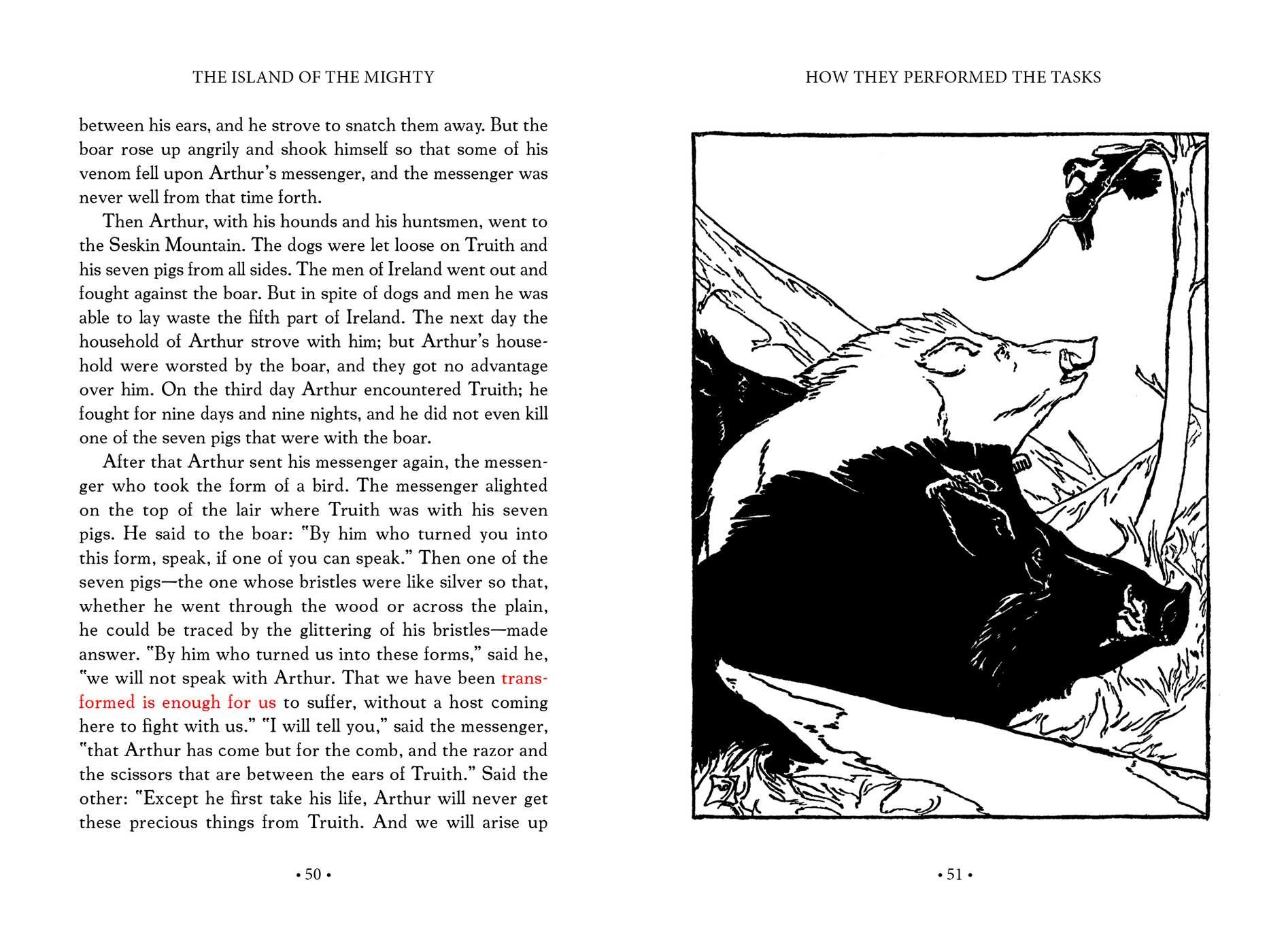 The Island of the Mighty

From master storyteller Padriac Colum, winner of a Newbery Honor for The Golden Fleece, comes a collection of fifteen timeless stories that the ancient Celts told more than a thousand years ago.

Among the greatest storytellers of the world, the ancient Celts told tales that, after more than a thousand years, still bristle with life and excitement. This beautifully illustrated book includes fifteen of these enchanting stories, including bold exploits at the Court of King Arthur.

Filled with handsome heroes, lovely maidens, and menacing sorcerers and giants, these tales continue to entertain.

The Island of the Mighty I. The Hunting of the Boar

How the Youth Kilhuch Came to King Arthur’s Court
Thus the youth rode to the Court of King Arthur: the horse that was under him was of four winters old, firm of limb, with head of dappled gray, with shell-formed hoofs, having a bridle of linked gold on its head, and on its back a saddle of gold. In the youth’s hands were two spears of silver, sharp and well-tempered, of an edge to wound the wind, and swifter than the fall of a dewdrop from the blade of reed-grass upon the earth when the dew of June is at its heaviest. A gold-hilted sword was upon his thigh, the blade of which was of gold, bearing a cross of inlaid gold of the hue of the lightning of Heaven, and his war-horn was of ivory. Before him were two brindled, white-breasted greyhounds, having strong collars of rubies about their necks. And the hound that was on his left side bounded across to the right side, and the one on his right to his left, and like two sea-swallows they sported around him. His horse, as it coursed along, cast up four sods with its four hoofs, like four swallows in the air, about his head, now above, now below. About him was a four-cornered cloth of purple, and an apple of gold was at each corner, and every one of the apples was of the value of a hundred kine. And there was precious gold of the value of three hundred kine upon his shoes, and upon his stirrups, from his knee to the tip of his toe. And the blade of grass bent not beneath him, so light was his courser’s tread as he journeyed toward the gate of King Arthur’s palace.

When he came before the palace, the youth called out, “Open the gate.” “I will not open it,” said the porter. “Wherefore not?” asked the youth. “The knife is in the meat, and the drink is in the horn, and there is revelry in Arthur’s hall, and none may enter therein except the son of a King of a privileged country, or a craftsman bringing here his craft. Stay thou outside. There will be refreshment for thy hounds and for thy horse, and for thee there will be collops of meat cooked and peppered, and luscious wine, and mirthful songs. A lady shall smooth thy couch for thee and lull thee with her singing; and early in the morning, when the gate is opened for the multitude that came hither to-day, for thee it shall be opened first, and thou mayest sit in the place that thou shalt choose in Arthur’s hall.” Said the youth, “That I will not do. If thou openest the gate for me, it is well. But if thou dost not open it, I will set up three shouts at this very gate, and these shouts will be deadly to all.” “What clamor soever thou mayest make,” said the porter, “against the law of King Arthur’s palace thou shalt not enter until I go first and speak with the King.”

So the porter went into the hall. The King said to him when he came near, “Hast thou news from the gate?” The porter said, “Half my life is past, and half of thine. I have seen with thee supreme sovereigns, but never did I behold one of equal dignity with him who is now at thy gate.” Then said King Arthur to him, “If walking thou didst enter, return thou running. It is unbecoming to keep such a one as thou sayest he is outside in wind and rain.” Then said the knight Kai who was in Arthur’s hall at the time, “By the hand of my friend, if thou wouldst follow my counsel, thou wouldst not break through the laws of thy court because of him.” “Not so, blessed Kai,” said Arthur. “The greater our courtesy, the greater will be our renown, and our fame, and our glory.” And by this time the porter was back at the gate.
Padraic Colum

Padraic Colum (1881–1972) was a poet, a playwright, and a leader of the Irish Renaissance, but he is best known for his works for children, including The Children of Odin and The Golden Fleece (a Newbery Honor Book).

The Island of the Mighty