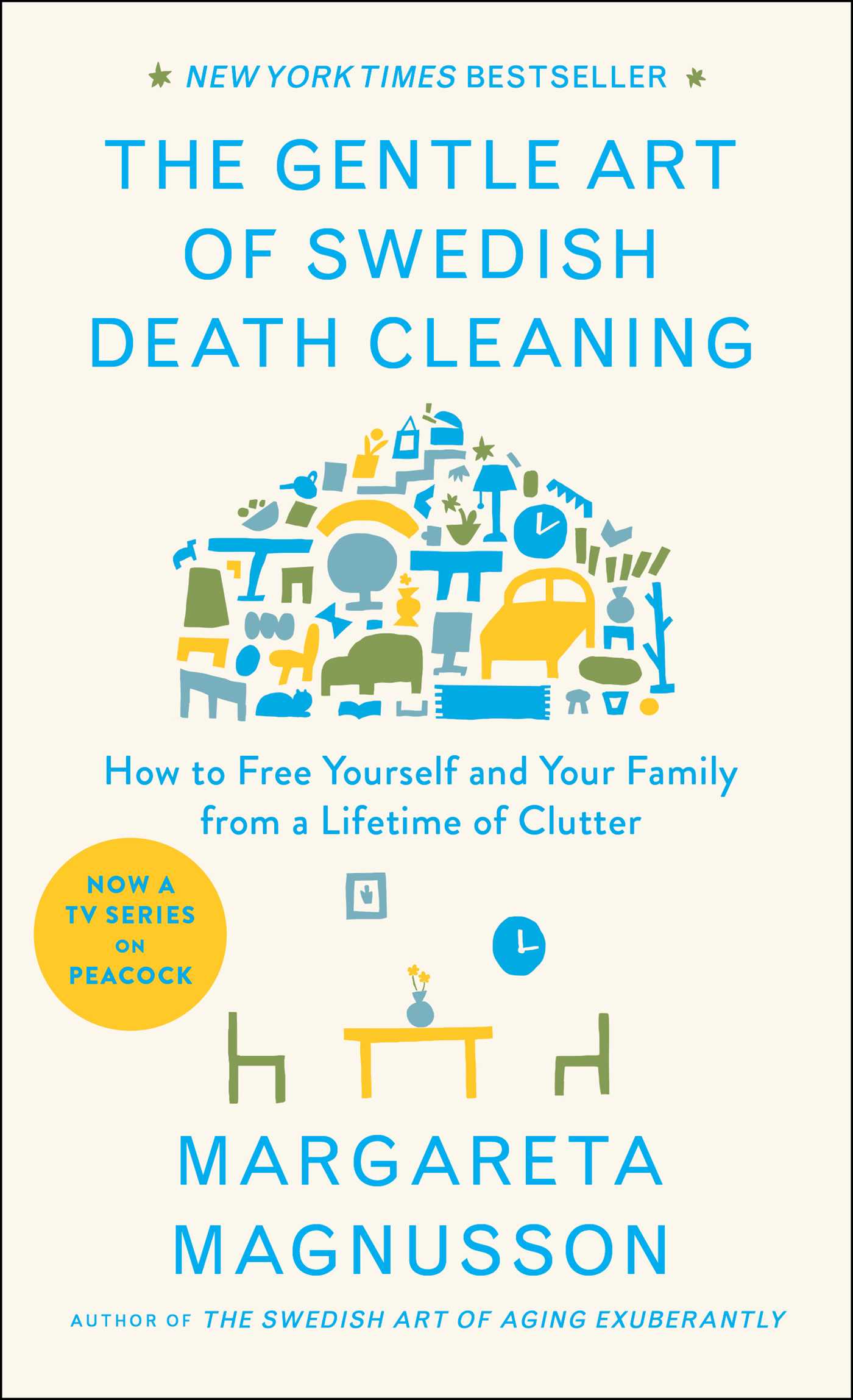 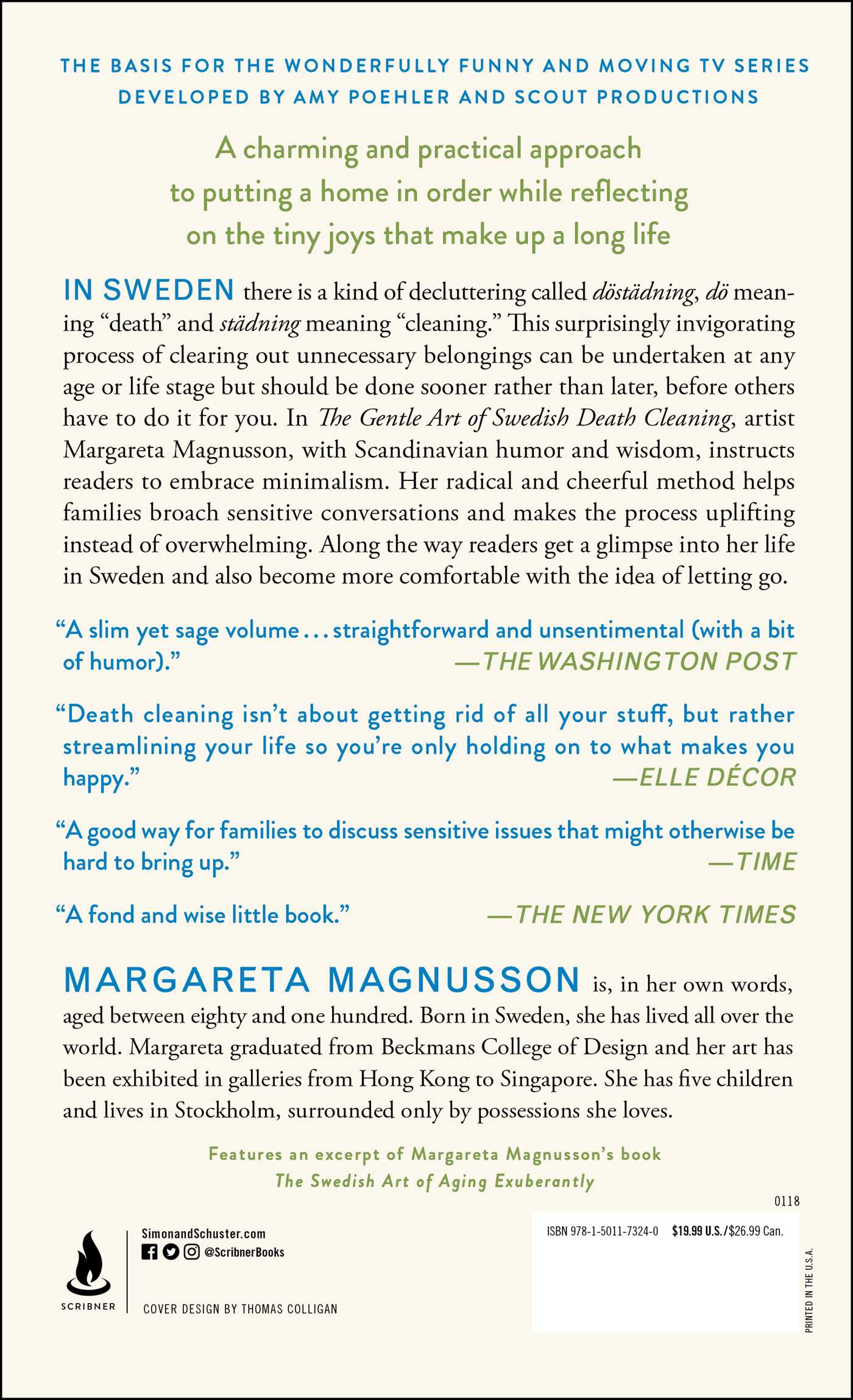 A charming, practical, and unsentimental approach to putting a home in order while reflecting on the tiny joys that make up a long life.

In Sweden there is a kind of decluttering called döstädning, dö meaning “death” and städning meaning “cleaning.” This surprising and invigorating process of clearing out unnecessary belongings can be undertaken at any age or life stage but should be done sooner than later, before others have to do it for you. In The Gentle Art of Swedish Death Cleaning, artist Margareta Magnusson, with Scandinavian humor and wisdom, instructs readers to embrace minimalism. Her radical and joyous method for putting things in order helps families broach sensitive conversations, and makes the process uplifting rather than overwhelming.

Margareta suggests which possessions you can easily get rid of (unworn clothes, unwanted presents, more plates than you’d ever use) and which you might want to keep (photographs, love letters, a few of your children’s art projects). Digging into her late husband’s tool shed, and her own secret drawer of vices, Margareta introduces an element of fun to a potentially daunting task. Along the way readers get a glimpse into her life in Sweden, and also become more comfortable with the idea of letting go. 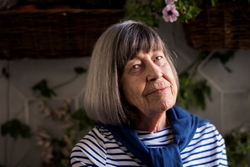 Margareta Magnusson is, in her own words, aged between 80 and 100. Born in Sweden, she has lived all over the world. Margareta graduated from Beckman's College of Design and her art has been exhibited in galleries from Hong Kong to Singapore. She has five children and lives in Stockholm. The Gentle Art of Swedish Death Cleaning is her first book.

"A fond and wise little book... I jettison advice books after I’ve flipped through them. This one I will keep."
—Dwight Garner, The New York Times

"A slim yet sage volume... While Japanese item-control diva Marie Kondo gave us strict instructions to only keep things that spark joy, Magnusson’s book is straightforward and unsentimental (with a bit of humor). The main message from this mother of five is: Take responsibility for your items and don’t leave them as a burden for family and friends."
—The Washington Post

"Proustian... A primer on how to winnow your belongings before you die, so you don’t burden your family... Ms. Magnusson is the anti-Kondo, who takes us on a charming and discursive tour of her own stuff."
—Penelope Green, The New York Times

"One of the most charming, funny, and motivating books I've read in some time... Magnusson is an absolute delight. This book is so much more than lifestyle tips. It's full of life. Magnusson's candid humor and unassailable spirit comes through on each page... The best way to prepare for death is to live a good life, which Magnusson has done. We're lucky that she shares so much of it — in stories of gratitude, family, work, and love."
—Buzzfeed

“Sure, it sounds morbid, but it's actually a pretty smart idea. Death cleaning isn't about getting rid of all your stuff, but rather streamlining your life so you're only holding onto what makes you happy . . . it's about so much more than dusting and sorting.”
—Elle Decor

“It’s a very short book and when I first picked it up, I thought it could easily have been edited down to a magazine article, or even a tweet…But her writing grew on me. If it were boiled down, I would miss her voice…Reading her book is much like having a sensible, cheerful aunt sit you down to tell you hard truths that your mother is too nice to say.”
—Laurie Hertzel, Minneapolis Star Tribune

“Keep only what you love and what makes you happy in the moment. It’s like Marie Kondo, but with an added sense of the transience and futility of this mortal existence.”
—The New York Post

"Has benefits you can enjoy while you’re still very much alive... could be a good way for families to discuss sensitive issues that might otherwise be hard to bring up." --TIME

"Pragmatic... the idea in this system is that we should leave behind as little as possible, or at least, not the many thousands of items of junk that Americans often accumulate." --W Magazine

"Magnusson uses a dry, unsentimental and sometimes dark Scandinavian sense of humor, and writes with an older set (and their younger relatives) in mind... like a conversation over tea with a friend." --Associated Press

"'Death Cleaning' is the answer to clutter you've been looking for...Magnusson instructs readers on how to gently and joyously put your affairs in order while you’re still alive, rather than leaving it for others to do." --Reader's Digest

"[With] humorous common sense, she rightly reminds readers that it takes time to downsize and that putting it off won’t make it go away." --Booklist

"You know you're old if the title grabs you, but even millennials will enjoy this non-militant approach to decluttering."              --PEOPLE Magazine

"A mindful way to sort through your belongings throughout your life, so that your loved ones aren’t burdened by a plethora of personal items after you die... Magnusson advises that the earlier we start the process of ‘death cleaning’, the better, so we’re not overwhelmed with a lifetime of objects by the time we’re elderly people." --Better Homes and Gardens

“I realize that Marie Kondo’s book The Life-Changing Magic of Tidying Up is all the rage, but I far prefer the charming, empathetic technique of Margareta Magnusson, whose book is a game-changer. I highly recommend it for anyone wrestling with a lifetime of wonderful — and not so wonderful — stuff.”
—Amy Dickinson, “Ask Amy”