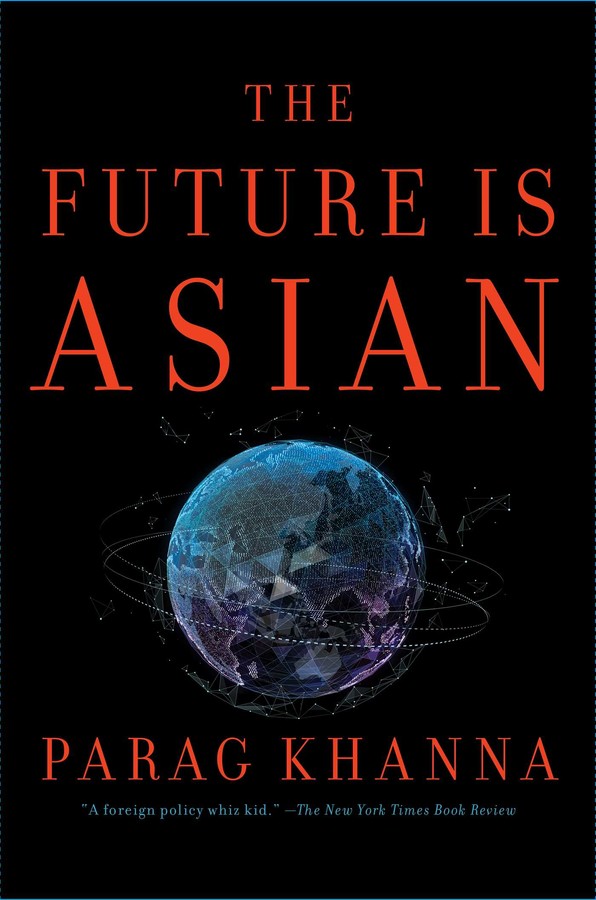 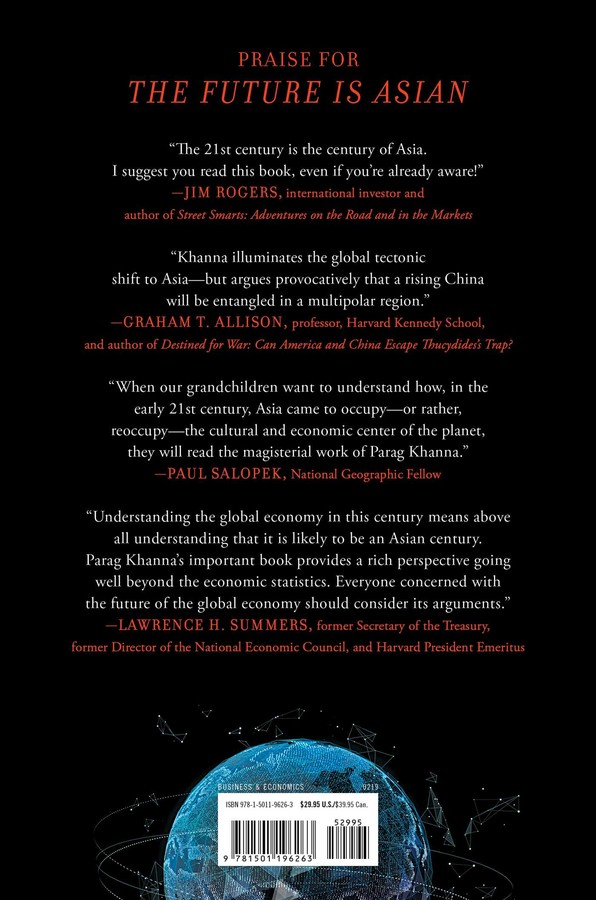 By Parag Khanna
LIST PRICE $29.95
PRICE MAY VARY BY RETAILER

The “Asian Century” is even bigger than you think. Far greater than just China, the new Asian system taking shape is a multi-civilizational order spanning Saudi Arabia to Japan, Russia to Australia, Turkey to Indonesia—linking five billion people through trade, finance, infrastructure, and diplomatic networks that together represent 40 percent of global GDP. China has taken a lead in building the new Silk Roads across Asia, but it will not lead it alone. Rather, Asia is rapidly returning to the centuries-old patterns of commerce, conflict, and cultural exchange that thrived long before European colonialism and American dominance. Asians will determine their own future—and as they collectively assert their interests around the world, they will determine ours as well.

There is no more important region of the world for us to better understand than Asia – and thus we cannot afford to keep getting Asia so wrong. Asia’s complexity has led to common misdiagnoses: Western thinking on Asia conflates the entire region with China, predicts imminent World War III around every corner, and regularly forecasts debt-driven collapse for the region’s major economies. But in reality, the region is experiencing a confident new wave of growth led by younger societies from India to the Philippines, nationalist leaders have put aside territorial disputes in favor of integration, and today’s infrastructure investments are the platform for the next generation of digital innovation.

If the nineteenth century featured the Europeanization of the world, and the twentieth century its Americanization, then the twenty-first century is the time of Asianization. From investment portfolios and trade wars to Hollywood movies and university admissions, no aspect of life is immune from Asianization. With America’s tech sector dependent on Asian talent and politicians praising Asia’s glittering cities and efficient governments, Asia is permanently in our nation’s consciousness. We know this will be the Asian century. Now we finally have an accurate picture of what it will look like.

The Future Is Asian 1 A History of the World: An Asian View 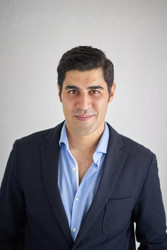 Parag Khanna is Managing Partner of FutureMap, a scenario planning and strategic advisory firm. He has been a fellow at Brookings, New America, and the Lee Kuan Yew School at the National University of Singapore, as well as an advisor to the US National Intelligence Council and US Special Operations Forces. Khanna holds a PhD from the London School of Economics, and bachelor’s and master’s degrees from the School of Foreign Service at Georgetown University. The author of The Future Is Asian, he is a Young Global Leader of the World Economic Forum.

"In an authoritative book which may well become a standard reference . . . Parag Khanna casts the net wider to deliver a compelling argument that Asia — rather than merely China — is the current and future lodestar for the global economy. Of Asia’s nearly 5bn people, 3.5bn are not Chinese."—James Kynge, Financial Times

"[Asia] is becoming increasingly blended into one political, cultural and economic unit poised to overtake a waning West. . . . The Future Is Asian offers a valuable and thoroughly researched analysis of one course that the region may take." —The Wall Street Journal

"A serious and well-documented attempt to make the case that the American century is giving way to a century in which economic and political power is increasingly centred on Asia. Khanna is keen to challenge the Sino-centric view of Asia, insisting on the importance of other countries and regions." —Gideon Rachman, Financial Times

"A comprehensive worldview from an Asian perspective . . . Khanna enlists his considerable global experience and education to elegantly lay out the vast range and enormous potential of what he calls the Asian system of moving beyond geography and embracing alliances, institutions, infrastructure, trade, investment, culture and other patterns. . . . Khanna begins with a dazzling distillation of the history of the world from an Asian perspective. . . . Thorough and clear, offering abundant food for thought."—Kirkus Reviews

"Asia is vast, bustling and rapidly becoming an integrated, world-dominating region, according to this sprawling geo-economic study. . . . Khanna’s wealth of statistics, deep knowledge, and lucid prose make for a stimulating overview of the rising colossus."—Publishers Weekly

"An upbeat examination of a changing 'Greater Asia' . . . Eurasia’s future is likely to be more ductile than fixed and hegemonic. In this new world order, actions still lead to reactions." —The Economist

“Understanding the global economy in this century means above all understanding that it is likely to be an Asian Century. Parag Khanna’s important book provides a rich perspective going well beyond the economic statistics. Everyone concerned with the future of the global economy should consider its arguments.”—Lawrence H. Summers, Former Secretary of the Treasury, Former Director of the National Economic Council, and Harvard President Emeritus.

“Khanna illuminates the global tectonic shift to Asia—but argues provocatively that a rising China will be entangled in a multi-polar region.”—Graham T. Allison, Professor, Harvard Kennedy School and author of Destined for War

“Parag Khanna’s magisterial work weaves a powerful story where business, technology, globalization and geopolitics are intertwined. This is a must read for anyone who wants to understand the role of Asia in shaping the future of the world.”—Nandan Nilekani, Co-founder and Chairman of Infosys, Founding Chairman of Aadhaar (UIDAI)

“The 21st century is the century of Asia. I suggest you read this book, even if you’re already aware!”—Jim Rogers, International Investor and author of Street Smarts: Adventures on the Road and in the Markets

"In The Future is Asian, Parag Khanna paints a vibrant and multi-faceted picture of the economic, political and cultural dynamics shaping Asia and the world more broadly. This is a thought-provoking work that deserves to be read by practitioners, scholars and general readers alike."—The Hon. Kevin Rudd, 26th Prime Minister of Australia and President, Asia Society Policy Institute

"For most of recorded history, Asia was the economic, technological and cultural centre of the world. From that perspective, the last 500 years of Western dominance almost appear an aberration. This book imagines what reprising the lead role would look like for Asia, and what it means for the rest of the world. An indispensable book for the 'Asian century'."—Tony Fernandes, Founder and CEO, Air Asia

"Like it or not, the world's economic, political, and cultural power is shifting (back) to Asia. Parag Khanna brilliantly explains the whys and hows and extrapolates future trends. This book should be read by policy-makers, academics, and anybody else who wants to make sense of our new world." —Daniel A. Bell, Dean, School of Political Science and Public Administration, Shandong University

"As China rises steadily to become the largest economy in the world, other Asian powers will also emerge. India is an equally dynamic civilisation. Southeast Asia, led by ASEAN, will be a major growth center. To understand and deal with a new multipolar Asia, there could be no better guide for China than this book. A must read!" —Kishore Mahbubani, founding dean of the Lee Kuan Yew School of Public Policy, National University of Singapore

By Parag Khanna
LIST PRICE $29.95
PRICE MAY VARY BY RETAILER