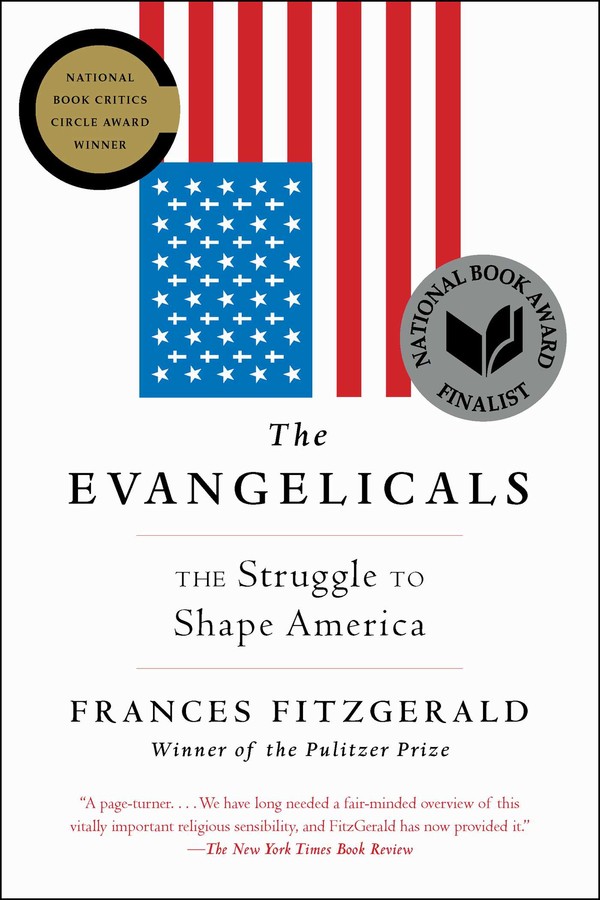 The Struggle to Shape America

By Frances FitzGerald
LIST PRICE $16.99
PRICE MAY VARY BY RETAILER

This “epic history” (The Boston Globe) from Pulitzer Prize-winning historian Frances FitzGerald is the first to tell the powerful, dramatic story of the Evangelical movement in America—from the Puritan era to the 2016 election. “We have long needed a fair-minded overview of this vitally important religious sensibility, and FitzGerald has now provided it” (The New York Times Book Review).

The evangelical movement began in the revivals of the eighteenth and nineteenth centuries, known in America as the Great Awakenings. A populist rebellion against the established churches, it became the dominant religious force in the country.

During the nineteenth century white evangelicals split apart, first North versus South, and then, modernist versus fundamentalist. After World War II, Billy Graham attracted enormous crowds and tried to gather all Protestants under his big tent, but the civil rights movement and the social revolution of the sixties drove them apart again. By the 1980s Jerry Falwell and other southern televangelists, such as Pat Robertson, had formed the Christian right. Protesting abortion and gay rights, they led the South into the Republican Party, and for thirty-five years they were the sole voice of evangelicals to be heard nationally. Eventually a younger generation proposed a broader agenda of issues, such as climate change, gender equality, and immigration reform.

Evangelicals now constitute twenty-five percent of the American population, but they are no longer monolithic in their politics. They range from Tea Party supporters to social reformers. Still, with the decline of religious faith generally, FitzGerald suggests that evangelical churches must embrace ethnic minorities if they are to survive. “A well-written, thought-provoking, and deeply researched history that is impressive for its scope and level of detail” (The Wall Street Journal). Her “brilliant book could not have been more timely, more well-researched, more well-written, or more necessary” (The American Scholar).

Frances FitzGerald is the recipient of the Pulitzer Prize, the National Book Award, the Bancroft Prize, and a prize from the National Academy of Arts and Sciences. She is the author of The Evangelicals: The Struggle to Shape America; Fire in the Lake: the Vietnamese and the Americans in Vietnam; America Revised: History School Books in the Twentieth Century; Cities on a Hill: A Journey through Contemporary American Cultures; Way Out in the Blue: Reagan, Star Wars and the End of the Cold War; and Vietnam: Spirits of the Earth. She has written for The New Yorker, The Atlantic, Harper’s, The New York Review of Books, The Nation, Rolling Stone, and Esquire.

“A page turner: FitzGerald is a great writer capable of keeping a sprawling narrative on point . . . Anyone curious about the state of conservative American Protestantism will have a trusted guide in this Bancroft and Pulitzer Prize winner . . . We have long needed a fair-minded overview of this vitally important religious sensibility, and FitzGerald has now provided it.”

“A well-written, thought-provoking and deeply researched history that is impressive for its scope and level of detail.”

“The waves of conservative Protestant influence that have swept American life at various points in history have often seemed to come out of nowhere. The emergence of the Christian right's political influence in the 1970s, for example, just as experts said religion was losing its place in U.S. culture, was shocking. But in her new major work on the subject, The Evangelicals, historian Frances FitzGerald shows how the origins of these booms are discernible from afar. Her book makes the case so well, it leaves readers with the feeling that we should all be paying closer attention.”

“An epic history of white American evangelical Protestantism from Plymouth Rock to Trump Tower . . . Fitzgerald, who won a Pulitzer Prize in 1973 for “Fire in the Lake,’’ an account of the Vietnam War, gracefully swoops over the decades of populist evangelicalism with Barbara Tuchman-like grace. This is a comprehensive, heavily footnoted, yet readable study of how the evangelical tradition has become seared into the fabric of American life and the key figures who made it happen. . . . Fitzgerald, always judicious and unbiased, nobly succeeds in analyzing the nuanced differences between evangelicalism and fundamentalism, Calvinism and postmillennialism, charismatics and Pentecostals.”

“[A] capacious history of Evangelical American Protestantism. This rich narrative ranges across the various Evangelical denominations while illuminating the doctrines—especially personal conversion as spiritual rebirth, and adherence to the Bible as ultimate truth—that unite them. . . . A complex and fascinating epic.”

“FitzGerald’s brilliant book could not have been more timely, more well-researched, more well-written, or more necessary.”

“Frances FitzGerald answers the recurrent question, “Where did these people [mainly right-wing zeal­ots] come from?” She says there is no mystery involved. They were always here. We were just not looking at them. What repeatedly makes us look again is what she is here to tell us.”

“An excellent work that is certain to be a standard text for understanding contemporary evangelicalism and the American impulse to reform its society.”

“Without a doubt the best book on the history and present status of American evangelicals. . . . ambitious, engaging, and nuanced.”

“This is the book I’ve been waiting for. Now we have in one volume the richly textured, often puzzling, and always engaging story of American evangelicalism from colonial days to the present. To understand evangelicalism’s impact on our country, this is must reading.”

– Robert Wuthnow, Professor of Sociology and Director of Princeton University’s Center for the Study of Religion

“Another superb work by renowned but long-absent political journalist FitzGerald . . . this one centering on the roiling conflict among American brands of Christianity. . . . Overflowing with historical anecdote and contemporary reportage and essential to interpreting the current political and cultural landscape.”

“FitzGerald has crafted nothing less than a spiritual history of the nation whose truest believers have for four centuries constituted themselves a moral majority. This is an American story, objectively told and written from the inside out”

– Richard Norton Smith, author of On His Own Terms: A Life of Nelson Rockefeller

“A compelling narrative history of “the white evangelical movements necessary to understand the Christian right and its evangelical opponents.” . . . [FitzGerald] skillfully introduces readers to the terminology, key debates, watershed events, and personalities that have populated the history of white American evangelical Protestant culture in the last half-century. She explains issues such as fundamentalism, biblical inerrancy, Christian nationalism, civil religion and anticommunism, the charismatic movement, and abortion, and introduces such diverse figures as Karl Barth, Jerry Falwell, Reinhold Niebuhr, and Pat Robertson . . . a timely and accessible contribution to the rapidly growing body of literature on Christianity in modern America.”

“This is an important book. FitzGerald has written a monumental history of how evangelicalism has shaped America. Few movements in our long story have had as significant an influence on American life and culture as conservative Christianity, and FitzGerald does full justice to the subject's scope and complexity.”

“A rare and valuable book. It’s admirable that Frances FitzGerald is able to tell the story of the American evangelical movement without judgment or bias—but it’s absolutely astonishing that she’s able to tell it with such authority, clarity, and complete grasp of the historical context.”

– Daniel Okrent, author of Last Call: The Rise and Fall of Prohibition

“The Evangelicals is a comprehensive history of white evangelical movements in the United States, geared to provide a deeper understanding of present-day evangelicals and their influence. Journalist and historian Frances FitzGerald presents nearly 300 years of complex ideologies, schisms, social reforms and energetically creative theology in a well-organized, eye-opening narrative. . . . This book is not only for those with a particular interest in religious history; it is for anyone with a serious interest in American social movements, politics and culture. It is a history that strongly re-emphasizes the evolution of a nation, and those who hope to shape the future are wise to study the past.”

"The Evangelicals explodes any notion of evangelicalism as a monolithic movement. FitzGerald also deftly captures the 'exotic cast' of this pure product of America..."

"Essential reading on the conjoined nature of religion and politics today."

“Massively learned and electrifying . . . the long, contradictory, and compelling history of American Evangelicals and the world they made. In the telling of this story, FitzGerald pulls off an admirable feat. She writes compassionately about generations of deeply held faith without seeming naive, even as she resists cynicism while noting the psychotics, charlatans, and con artists who have sometimes arisen to "deceive the very elect." The result is a quiet marvel of a book, well deserving of winning its author her second Pulitzer . . . magisterial . . . FitzGerald is adroit and gentle in noting how often America’s religious right wing seems to have been fighting rearguard actions.”

“This incisive history of white evangelical movements in America argues that their influence has been more pervasive and diverse than generally realized.”

"A formidable achievement that could become one of the definitive works on the subject."

The Struggle to Shape America

By Frances FitzGerald
LIST PRICE $16.99
PRICE MAY VARY BY RETAILER