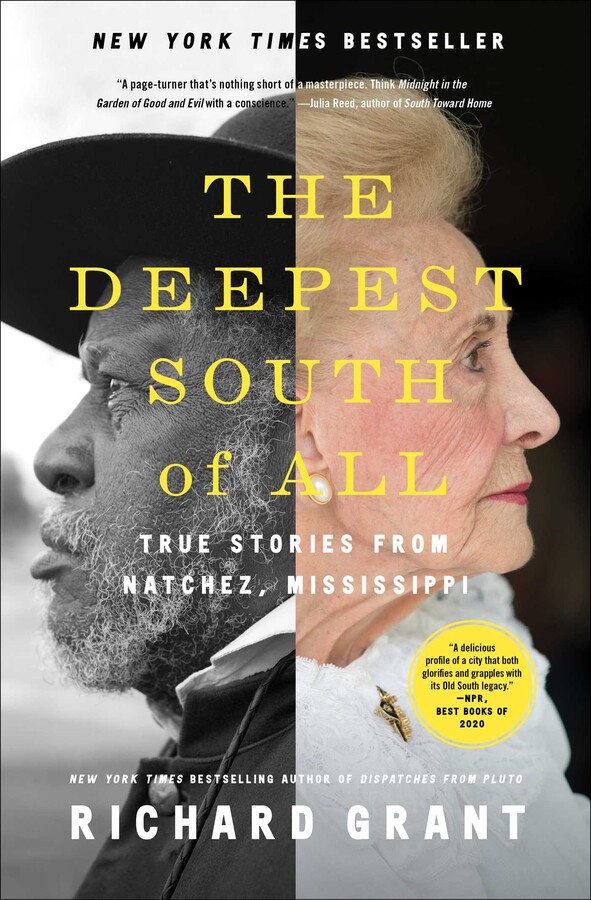 By Richard Grant
LIST PRICE $13.99
PRICE MAY VARY BY RETAILER

Bestselling travel writer Richard Grant offers an entertaining and profound look at a city like no other.

Natchez, Mississippi, once had more millionaires per capita than anywhere else in America, and its wealth was built on slavery and cotton. Today it has the greatest concentration of antebellum mansions in the South, and a culture full of unexpected contradictions. Prominent white families dress up in hoopskirts and Confederate uniforms for ritual celebrations of the Old South, yet Natchez is also progressive enough to elect a gay black man for mayor with 91% of the vote.

Much as John Berendt did for Savannah in Midnight in the Garden of Good and Evil and the hit podcast S-Town did for Woodstock, Alabama, so Richard Grant does for Natchez in The Deepest South of All. With humor and insight, he depicts a strange, eccentric town with an unforgettable cast of characters. There’s Buzz Harper, a six-foot-five gay antique dealer famous for swanning around in a mink coat with a uniformed manservant and a very short German bodybuilder. There’s Ginger Hyland, “The Lioness,” who owns 500 antique eyewash cups and decorates 168 Christmas trees with her jewelry collection. And there’s Nellie Jackson, a Cadillac-driving brothel madam who became an FBI informant about the KKK before being burned alive by one of her customers. Interwoven through these stories is the more somber and largely forgotten account of Abd al Rahman Ibrahima, a West African prince who was enslaved in Natchez and became a cause célèbre in the 1820s, eventually gaining his freedom and returning to Africa.

Part history and part travelogue, The Deepest South of All offers a gripping portrait of a complex American place, as it struggles to break free from the past and confront the legacy of slavery. 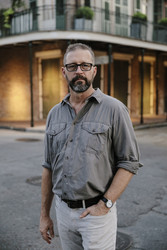 Richard Grant is an award-winning author, journalist, and television host. He currently writes for Smithsonian magazine, The New York Times, Al Jazeera America, the Telegraph (UK), and several other publications. He grew up in London, England, and now lives in Jackson, Mississippi. His latest book is Dispatches from Pluto, a New York Times bestseller and Winner of the Pat Conroy Southern Book Prize. His previous books are Crazy River, God’s Middle Finger, and American Nomads.

"[An] entertaining and informative travelogue...Readers will be enthralled by Grant’s lively prose and the colorful contradictions of this unique and haunted place."—Publishers Weekly (starred review)

"This richly layered book offers a multifaceted view of the culture and history of an American city that, in its history, reveals the roots of the racial conflicts that continue to haunt the American psyche. An entertaining and thought-provoking memoir and sociological portrait."—Kirkus Reviews

"Grant deftly and pointedly juxtaposes anecdotes of garden club turf wars among the city’s wealthy, white elite with appalling accounts of slave auctions, life under Jim Crow rule, and the continuing inequality still facing the city’s Black residents. At a time when our country once again attempts to confront its systemic racism, Grant’s potent examination of the confluence of white and African American cultures presents a timely overview of the source of many deep-seated misperceptions and struggles." —Booklist (starred review)

“Grant plops himself in the town of Natchez, Mississippi, during its annual Tableaux. He chronicles the antebellum-themed pageant’s organizers’ struggles to keep it relevant—and their deeper conflicts about what it represents—with empathy, skepticism, and exquisitely dry wit. One local’s quip to Grant sums it up perfectly: ‘This whole town is like a Southern Twin Peaks.’”—Jonathan Miles, Garden & Gun

“Use a random number generator and you’ll always land on a page that will leave you chuckling, lifting your jaw off the floor or shaking your head in dismay…Though filled with wild and woolly tales, Grant’s travelogue also posits Natchez as a stand-in for the nation and a guidepost pointing the way forward.” —Stuart Miller, The Los Angeles Times

“Travel writer Grant sensitively probes the complex and troubled history of the oldest city on the Mississippi River through the eyes of a cast of eccentric and unexpected characters.”—Juliana Rose Pignataro, Newsweek (“25 Must-Read Fall Books to Escape the Chaos of 2020”)

"With the easygoing manner—social and literary—displayed in Dispatches from Pluto, Richard Grant has slipped into the gossipy waters of Natchez and allowed the vexed and deeper history of race to bubble to the surface—where, it turns out, it’s been lurking all along.”—GEOFF DYER, National Book Critics Circle Award–winning author of Otherwise Known as the Human Condition

“Richard Grant’s skilled writing shows how Mississippi as a place reveals itself in its unique and memorable stories. It is through his careful weaving together of tales told by the book’s cast of lively characters that the reader engages with a narrative that reaches beyond the borders of the small river town of Natchez. In the end, The Deepest South of All is not just a book about Mississippi or the South. This is a book about America and how we as a nation tend to grasp our myths so tightly that we begin to obscure what is real, what looms right before our very eyes.” —W. RALPH EUBANKS, author of Ever Is a Long Time and The House at the End of the Road

"I grew up in a town in the Mississippi Delta barely three hours away, but Natchez might as well have been a separate universe—albeit a small and insular one. Grant does a singular and surprisingly nuanced job of capturing that universe and its inhabitants, with their wild (and often carefully cultivated) eccentricities, their obsession with genealogy and houses, their deeply ingrained habit of rewriting the past. He captures the paradoxes—ladies of the old guard still 'receive' tourists in hoop skirts during the annual Pilgrimage but the enormously popular mayor is a gay African-American. There are crazy feuds, wild bits of lore, and great 'characters' to be sure, but the book is much more than a rollicking tale of colorful Southerners. Grant deftly weaves in the city’s painful and violent history so that the end result is a page-turner that's nothing short of a masterpiece. Think Midnight in the Garden of Good and Evil with a conscience."—Julia Reed, author of South Toward Home

“Like an intrepid explorer, Richard Grant has discovered another American eccentricity and delivers in The Deepest South of All a riotous tale of Natchez, Mississippi, a hothouse populated by remnants of a faded aristocracy as well as resentful descendants of slaves in a river town governed by a gay black mayor but really ruled by two bickering garden clubs paying homage to the Confederacy.”—CURTIS WILKIE, author of The Fall of the House of Zeus

“Yes, bourbon and hoopskirts. But also an eighteenth-century West African prince and an anti-Klan paramilitary group. Natchez is a place we call ‘unlikely,’ by which we mean its strangeness runs deeper, its violence burns brighter, even its openings for reconciliation seem wider. Yet Grant wisely suggests that these eye-popping tales reveal a story about race that is neither curious nor unique, but wholly American. In this testament to how stories define us all, Grant, frank and empathetic, makes us root for Natchez the way we should root for our own towns.” —KATY SIMPSON SMITH, author of The Everlasting

By Richard Grant
LIST PRICE $13.99
PRICE MAY VARY BY RETAILER