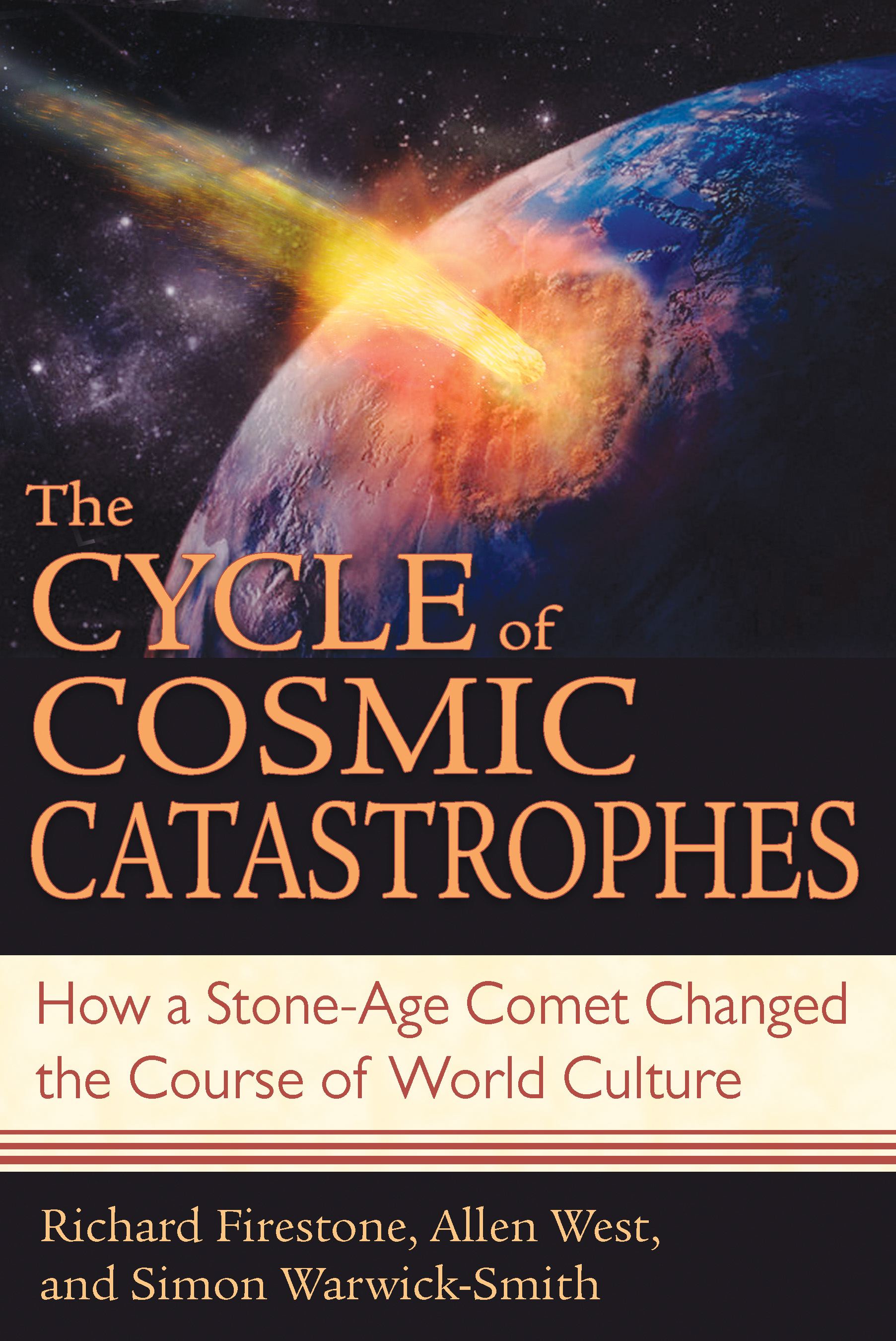 There are a number of puzzling mysteries in the history of Earth that have yet to be satisfactorily explained by mainstream science: the extinction of the dinosaurs, the vanishing of ancient Indian tribes, the formation of the mysterious Carolina Bays, the disappearance of the mammoths, the sudden ending of the last Ice Age, and the cause of huge underwater landslides that sent massive tsunamis racing across the oceans millennia ago. Eyewitness accounts of these events are chronicled in rich oral traditions handed down through generations of native peoples. The authors’ recent scientific discoveries link all these events to a single cause.

In The Cycle of Cosmic Catastrophes Richard Firestone, Allen West, and Simon Warwick-Smith present new scientific evidence about a series of prehistoric cosmic events that explains why the last Ice Age ended so abruptly. Their findings validate the ubiquitous legends and myths of floods, fires, and weather extremes passed down by our ancestors and show how these legendary events relate to each other. Their findings also support the idea that we are entering a thousand-year cycle of increasing danger and possibly a new cycle of extinctions.

The Survivors: The Lakota Nation of Native Americans
This story, which describes a worldwide fire and deluge, along with giant animals that sound very much like descriptions of Ice Age animals, very closely matches the scientific evidence we have uncovered. The story tells of Thunderbirds in the sky, and to this day, some people say that one of the Lakota tribes, the Blackfeet, has a sacred ceremonial pipe, made of “thunderstone,” a rare piece of an iron meteorite. Tribal elders say that it fell from the sky after the Thunderbirds created it in a terrible lightning storm. Many other tribes use the Thunderbird symbol to indicate both the destructive effects of lightning, as well as the impact of meteorites. This particular tale comes from the Brule, another member of the Lakota Nation.

Battle with the Giant Animals
In the world before this one, the People and the animals turned to evil and forgot their connection to the Creator. Resolving to destroy the world and start over, Creator warned a few good People to flee to the highest mountaintops. After they were safe, He sang the Song of Destruction and sent down fierce Thunderbirds to wage a great battle against the other humans and the giant animals.

They fought for a long time because the evil men and the animals had become very powerful, and neither side could gain an advantage. Finally, at the height of the battle, the Thunderbirds suddenly threw down their most powerful thunderbolts all at once. The fiery blast shook the entire world, toppling mountain ranges, and setting forests and prairies ablaze. Searing flames leapt up to the sky in all directions, sparing only the few People on the highest peaks. It was so hot that the world’s lakes boiled and dried up before their eyes. Even the rocks glowed red-hot, and the giant animals and evil people burned up where they stood.

After the Earth finished baking, Creator began to make a new world, and as He chanted the Song of Creation, it began to rain. He sang louder and it rained harder until the rivers overflowed their banks and surged across the baked landscape. Finally, He stamped the Earth and with a great quake the Earth split open, sending great torrents of water surging across the entire world, until only a few mountain peaks stood above the flood, sheltering the few huddled People who had survived. After the waters cleansed the Earth and subsided, Creator sent the surviving People out to populate the new world, our world today, but He warned them not to fall into evil, or He would destroy the world again. As the People went out over the land, they found the bleached bones of the giant animals buried in rock and mud all over the world. People still find them today in the Dakota Badlands. (Retold from Erdoes, 1984.)

There are about seven common threads in the ancient cultural stories in this book, and even though not all threads are in every story, each one has most of the following:

• The Creator warned of trouble.
• Almost everyone ignored the warnings.
• The few people who listened took action to save themselves and others.
• Fire, stones, and/or ice soon fell from the sky.
• Thick clouds formed, heavy rains fell, and flooding began.
• Many people, plants, and animals perished.
• Some survived to rebuild and to repopulate the new world.

We believe that these seven points accurately describe a cosmic-created chain of events that started 41,000 years ago and culminated in a major global catastrophe 13,000 years ago. Amazingly, the accounts described from the point of view of the eyewitnesses correspond very well with the scientific evidence. This is what they saw, felt, and experienced, and their stories allow us to add a human dimension to the scientific facts, as we look back upon their time from the present day.

Yet these stories are more than a simple chronicle of the disaster 13,000 years ago; they are stories about survival. After all, these stories came from the ones who survived, and they tell us how they did it: by listening to the warnings and by taking the appropriate action. Today, we face the same threat from the skies that they did. It has not gone away. The question is this: will we learn anything from them? Or will we have to stumble blindly through a similar disaster with equally grave consequences.

During the past 1,000 years, we know that at least six supernovae occurred within 20,000 light years (6,100 parsecs) of Earth, an area which represents only a small part of our Milky Way galaxy. As many as 15 supernovae might occur each century in our galaxy.

Historically, we may expect a supernova closer than 815 light years (250 parsecs) every 100,000 years. This is within the range at which the Event supernova occurred.

QUESTION: Has anyone ever seen a supernova that blew up very near the Earth?

According to the above rates, close ones are infrequent, and no one has seen one in recorded times. However, a few ancient cultural stories describe seeing a twin sun in our skies. This is exactly the way a close supernova would appear. We saw earlier in this chapter that some in distant galaxies briefly give off more light than the entire rest of their galaxies. If a Type II supernova occurred very close to Earth, it definitely would rival the Moon in size and brightness for many weeks. In addition, the supernova would be visible during the day, dimming as the radioactive isotopes produced in its remnant decayed.
Richard Firestone

Richard Firestone holds a Ph.D. in nuclear chemistry and has been part of the Isotopes Project at Lawrence Berkeley National Laboratory since 1979.

Allen West, Ph.D., was the owner and CEO of an international scientific consulting company.

Simon Warwick-Smith worked as both a field exploration geologist and mining geologist in Australia and now heads Warwick Associates, a book consulting and publicity firm.

“The Cycle of Cosmic Catastrophes tells a fascinating, remarkable, and scientifically convincing story that will change how we look at our world. The important conclusion that catastrophes like this could happen again at any time should inspire a united global effort to confront this serious danger to Earth.”

“Reads like a mystery novel while presenting hard evidence for a cosmic catastrophe 13,000 years ago that rendered mammoths and many other large North American animals extinct. This is serious research presented in an easy-to-read style.”

". . . possibly, the most concise picture of our planet's history ever presented."

"This well-written book reads like a captivating detective story and, in my view, is the best available popular account of the great ice-age calamity that significantly shaped humanity’s cultural evolution."

"This is a memorable reading experience with much information to consider. This book is a page-turner."

"The Cycle of Cosmic Catastophes is not a book for the faint of heart; it is true to its title. In an easy to read manner, three vetted scientists bring ancient myths and geological facts into, possibly, the most concise picture of our planet's history ever presented."

"This is a book to get excited about. It's riveting, suspenseful, factual, and thoroughly science based. The authors are certainly not shallow armchair couch potatoes spinning tall tales as they have solid credentials and backgrounds in science and have traveled extensively to numerous archeological sites all over the North American continent to literally unearth and to piece together numerous scattered and startling clues."

"The authors, through their own research around the world provide a new explanation about the puzzling mysteries of cosmic catastrophes, especially one 13,000 years ago at the end of the Ice Age that is chronicled in rich oral traditions."