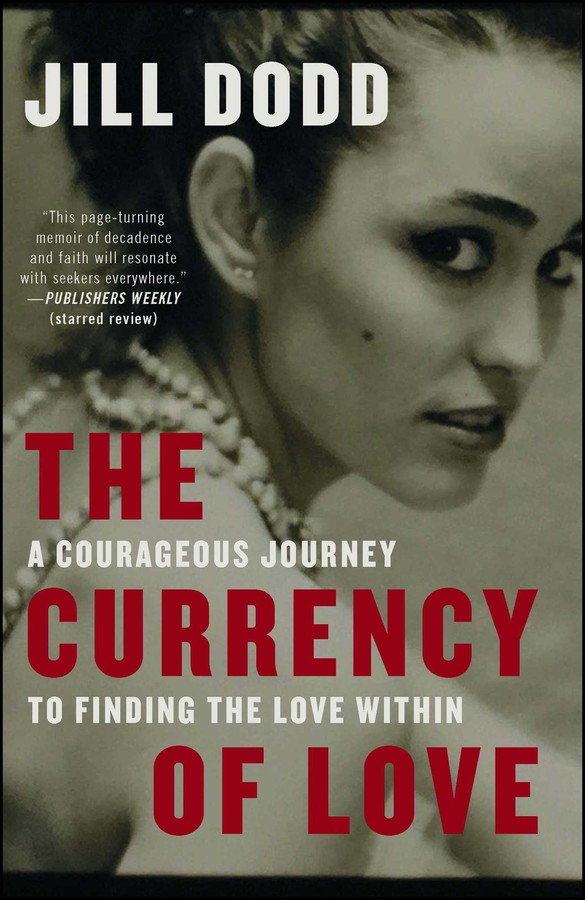 The Currency of Love

A Courageous Journey to Finding the Love Within

In this “page-turning memoir of decadence and faith” (Publishers Weekly, starred review), Jill Dodd writes movingly and evocatively about her journey from Paris model to Saudi billionaire’s harem wife to multi-million-dollar business entrepreneur.

In the 1980s, Jill Dodd determined that her ticket out of an abusive home was to make it as a top model in Paris. Armed with only her desire for freedom and independence, she embarks on an epic journey that takes her to uncharted territory—the Parisian fashion industry with all its beautiful glamour and its ugly underbelly of sex, drugs, and excess.

From there, Jill begins an eye-opening roller-coaster adventure that includes trips to Monte Carlo, sexual exploitation, and falling in love with one of the richest men in the world, soon becoming one of his many wives—until she ultimately finds the courage to walk away from it all and rebuild her dreams. In The Currency of Love, she “writes earnestly and refreshingly about learning many of life’s more difficult lessons the hard way” (Kirkus Reviews) with page-turning accounts of her struggles and triumphs as she paved her path through a dangerous and seductive world, before ultimately coming into her own as the founder and creator of global fashion line, ROXY.

This “raw and inspiring story” (PopSugar) with a feminist fairy tale twist reveals how one woman chose to live her life without forfeiting her independence, ambition, creative expression, and free spirit, all while learning one invaluable lesson: nothing is worth the sacrifice of her integrity, inner peace, and spirit.

This reading group guide for The Currency of Love includes an introduction and discussion questions. The suggested questions are intended to help your reading group find new and interesting angles and topics for your discussion. We hope that these ideas will enrich your conversation and increase your enjoyment of the book.

In the 1980s, Jill Dodd determined that her ticket out of an abusive home was to make it as a top model in Paris. Armed with only her desire for freedom and independence, she embarks on an epic journey that takes her to uncharted territory—the Parisian fashion industry with all its beautiful glamour and its ugly underbelly of sex, drugs, and excess. From there, Jill begins an eye-opening adventure that includes trips to Monte Carlo, sexual exploitation, and falling in love with one of the richest men in the world, agreeing to become one of his wives—until she finds the courage to walk away from it all and rebuild her dreams.

1. Which scenes in The Currency of Love were the most memorable for you? Which made you laugh? Did any shock or inspire you?

2. Jill Dodd writes about her first real friendship being a pivotal point in her life, saying Kelly “turn[ed] my weird, isolated life inside out.” Why was this friend so important? Have you ever had a friendship that changed your life? What made it beautiful and how did it alter your path?

3. The author hadn’t considered how tough it would be to live in a foreign country and was totally unprepared. However, she ultimately fell in love with Paris and found it liberating. Why did she feel so free in Paris? Have you ever lived in a new country? Was it liberating or just plain difficult?

4. Were you surprised by the physical and emotional burdens of being a model? Would you be willing to change your appearance for the promise of wealth or fame?

5. When Gerald pushes Jill into unwanted intercourse, she feels confused, helpless, and weak. While filming in Saint-Tropez, she suffers obsessive thoughts, paranoia, and insecurity. How did this reaction hearken back to her childhood? What factors from her formative years impact her later relationships with men?

6. Models are often objectified, such as described in the chapter “Queen Jewelry” when the photographer’s wife says, “Many years ago, when my husband and I began this business, he never looked at the models in that way, you know what I mean? They were only a tool to him, like a prop, a table or a chair.” Jill finds out the introduction to her was purchased—learning that she is an object for sale. Discuss Jill’s reaction to this revelation. How would you have reacted in this situation?

7. In the chapter “California Sucks” the author says, “I don’t want to be owned by [the agency] and I don’t want to be chained to this business. . . . Now I fly under the agency’s radar, in control of my plans. But success will hijack me and run me into the ground.” Jill suddenly wants to get lost in a foreign city. Why does she react this way? Was she afraid to lose her fragile footing, did she want a new life, or was she afraid of being controlled by the agency? Discuss.

8. Jill expresses herself through her clothes. She ultimately feels controlled by Adnan’s desire for her to look polished and sophisticated, wearing couture at his business dinners, and rebels by wearing wild makeup and a sexy pink dress in Vegas. Discuss the idea of suppression and control in limiting clothing choices or forcing a uniform on someone. Are you free to dress the way you want to? Why or why not? What are some of the ways you use clothing or makeup to express yourself?

9. The author thought fame and money would satisfy her. Yet in the chapter “Question Everything” she writes, “Billionaire wealth is a pain in the ass at least half the time. The food is fresh, healthy, and prettier than a flower arrangement. . . . Yet as soon as you acclimatize to all of this, it becomes the new normal and expected . . . And the worst part is that all of this luxury can leave an unhealthy vacuum of space and time, where anxiety and guilt can thrive, creating a cesspool.” How would extreme wealth change your life for the better? What might some of the negative effects be?

10. Early on, Jill sees Adnan as a saint. Why do you think she envisions him so positively? Do you think he deserves that portrayal? Why, or why not?

11. Adnan was simultaneously loyal and disloyal. Describe some of the other seemingly contradictory aspects of his personality or desires. What were some of his strengths and weaknesses? What lessons did Jill learn from Adnan?

12. Hollywood, Paris, and Las Vegas are almost characters themselves, with their own distinct personalities. Which place did you enjoy the most and least? How did the story shift from setting to setting?

13. Would you run away from or be drawn in by someone who could provide for you like Adnan? Have you ever thrown everything away to gain your personal freedom?

14. The desire to be free is universal. Many times throughout the book, Jill expresses her need to be free from entrapment. Why do you think freedom is utterly crucial for her? How do you define freedom? In what ways are you free or trapped in your own life?

15. Fame and money didn’t satisfy Jill in the way she had hoped. Was spirituality able to fulfill her? Do you think Jill found peace, or just took a small step toward peace? 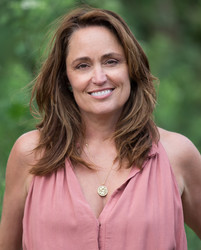 Jill Dodd is a writer, artist, and designer from Los Angeles, California. She graduated from the Fashion Institute of Design & Merchandising with honors and spent twenty-five years in the international fashion business. She gained recognition as the founder and original designer for the global women’s brand ROXY. She also designed swimwear for fifteen years for brands including Jag, On the Beach, and Sunsets. Prior to that, Jill modeled with Wilhelmina for ten years appearing in Paris Vogue, French Cosmopolitan, American Glamour, Bazaar, Mademoiselle, Teen, Women’s Wear Daily, and many other publications. She now lives in Northern California with her three ever-loving and entertaining children, her husband, and her dogs.

"This page-turning memoir of decadence and faith will resonate with seekers everywhere."

"A raw and inspiring story about one woman's search for independence."

"Dodd writes earnestly and refreshingly about learning many of life's more difficult lessons the hard way...A breezy, impressively detailed glimpse into a beautiful young woman's self-discovery via the world of international fashion."

"For some, freedom is financial security. Dodd believed it should mean more. Her drive led her to found ROXY, a multimillion-dollar fashion brand. She now reflects on the quality of her independence and each turn that brought her to its realization in a remarkable story well worth reading."

"The Currency of Love is a page-turning tale of female empowerment. With the current state of the world, the messages in this inspiring memoir are exactly what women need right now."

– Christine Bronstein, founder of A Band of Women

"Jill Dodd tells a tale of love and redemption involving a man of inconceivable riches and power against the backdrop of Paris and the world of high fashion. Told with the wisdom that gives Dodd’s story heart and soul, this book will inspire women of all ages to choose the right path for themselves, whatever their aspirations."

"Exotic as the tale of Dodd’s wild and wondrous life may seem, it touches on themes relevant to any young woman yearning to follow her dreams of financial independence and spiritual freedom. Neither fully a cautionary tale nor a glamorous romance (but a bit of both!), Dodd explores both the pitfalls and rewards of a life boldly lived."

– Jillian Lauren, New York Times bestselling author of Some Girls: My Life in a Harem

"This incredibly audacious, inspiring, and lively memoir paints a fascinating picture of the modeling and design scenes in Paris and Hollywood. Readers will be captivated by Jill's fierce ability to tell her truth. The Currency of Love is a celebration of womanhood!"

"This [memoir] had it all–secrets, romance, travel and suspense....It was empowering to watch Jill discover that she really was capable of happiness and success on her own terms."

The Currency of Love

A Courageous Journey to Finding the Love Within