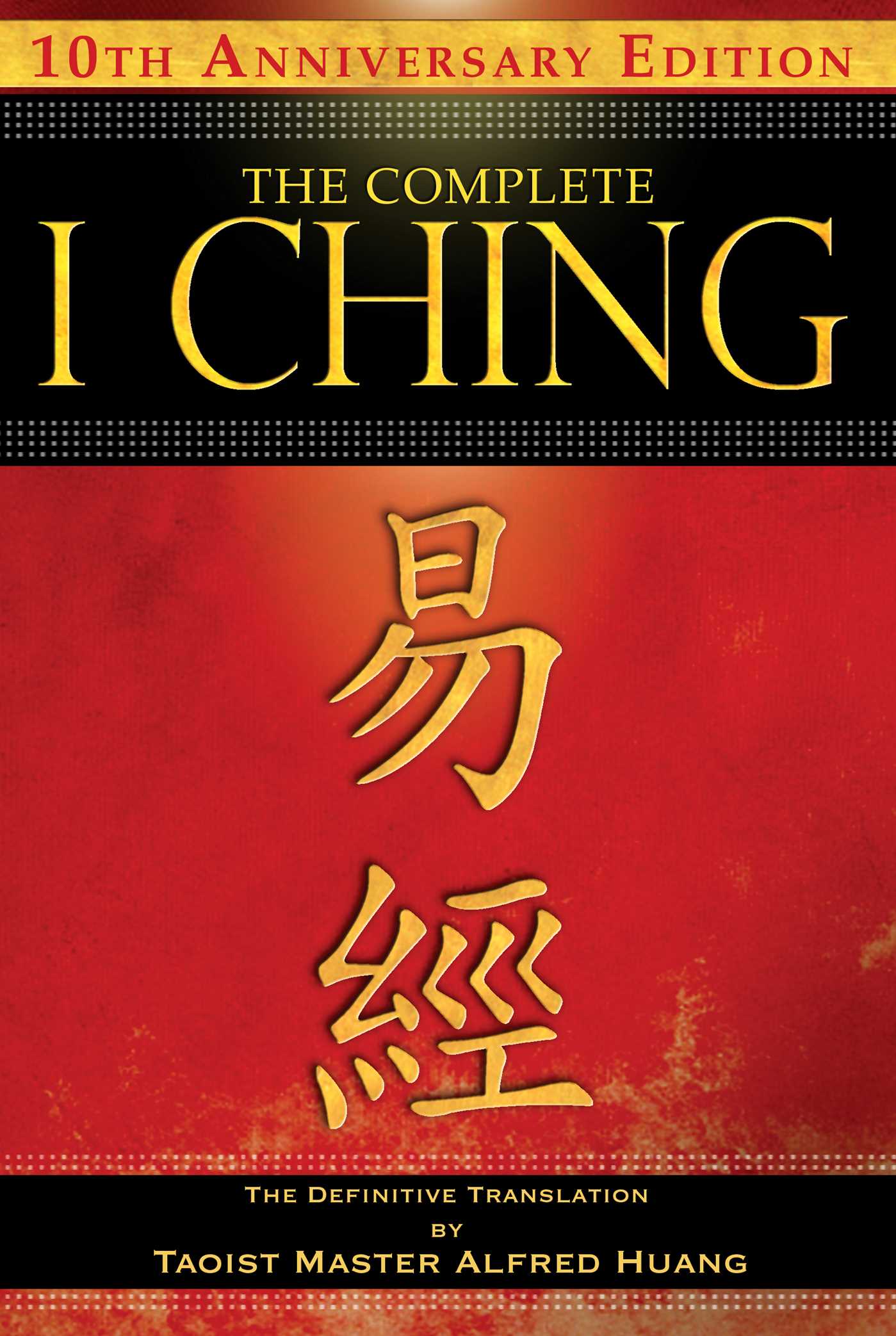 Translated by the eminent Taoist Master Alfred Huang, The Complete I Ching has been praised by scholars and new students of the I Ching since its first edition. A native Chinese speaker, Master Huang first translated the original ideograms of the I Ching into contemporary Chinese and then into English, bringing forth the intuitive meanings embodied in the images of the I Ching and imbuing his translation with an accuracy and authenticity not possible in other English translations. However, what makes his translation truly definitive is his return to prominence of the Ten Wings, the commentaries by Confucius that are essential to the I Ching’s insights.

This 10th anniversary edition offers a thorough introduction to the history of the I Ching, how to use it, and several new divination methods; in-depth and easy-to-reference translations of each hexagram name, description, and pictogram; and discussions of the interrelations between the hexagrams and the spiritual meaning of their sequence.

Yü originally meant delight: today it also means peace and happiness. Delight is the inverse of the preceding gua, Humbleness. Humbleness leads people to delight. Thus, Humbleness and Delight are complementary. Wilhelm translates Yü as Enthusiasm; Blofeld translates it as Repose. In this book I follow the original meaning, Delight.

Sequence of the Gua: When one’s harvest is great and one can still remain humble, there is sure to be an outburst of delight. Thus, after Humbleness, Delight follows.

The ideograph of this gua is a very old form consisting of two parts. The left portion is an ideograph of yü, which means hand out or give something away. There are two hands at the top and a vertical straight line connected to the lower hand, representing the arm. Between the two hands there is a little object. Taken as a whole it is a picture of the act of giving and receiving. The right portion of the ideograph represents an elephant, xiang. The elephant is standing upright on two rear legs with the tail touching the ground. The two front legs are held up in the air. The head of the elephant is looking forward with the long trunk curling upward. In the past there were elephants in the southern part of China, though they no longer exist there. In southern China, elephants were trained to help workers carry heavy things, but in the north they were trained for the purpose of giving people pleasure and delight. People performed a kind of dance known as the elephant dance, which King Wu was fond of. The two parts of the ideograph together mean delight--enjoyed by oneself or given to others.

The structure of this gua is Thunder above, Earth below. Thunder represents action, and Earth submission. These two primary gua standing together symbolize the action of the yang element followed delightfully by all the yin elements. In ancient China, people believed that the power of thunder had influence for a distance of a hundred li (a Chinese unit of length designating about one-third of a mile), equivalent to the realm of a feudal lord. For this reason, the Decision says, “Favorable to establish feudal lords and mobilize the multitude.” Earth is the symbol of a multitude. And establishing feudal lords means gaining assistance.

Delight.
Favorable to establish feudal lords
And mobilize the multitude.

Commentary on the Decision

Delight.
The firm meets with response.
Its will is fulfilled.
Acting in accord with the time and moving forward;
This is Delight.

Delight.
Acting in accord with the time and moving forward;
It is following the way of Heaven and Earth.
How much more will it be so
In establishing feudal lords and mobilizing the multitude?

Heaven and Earth move in accordance with the time;
Therefore sun and moon do not deviate from their courses,
And the four seasons do not err.

The holy person moves in accordance with the time and situation;
Therefore punishments and penalties become just,
And people are genuinely convinced.
Great indeed are the time and significance of Delight!

Commentary on the Symbol

Thunder comes out of the Earth,
Rising and stirring:
An image of Delight.
In correspondence with this,
The ancient king composed music to honor virtue and merit;
With ardent eagerness, he offered it to God
And shared it with his ancestors.

Singing out delight:
One’s will comes to an end.

2. Second Six
Firm as rock,
Not merely for a whole day.
Being steadfast and upright: good fortune.

Not merely for a whole day.
Being steadfast and upright: good fortune.
It is central and correct.

Staring upward, wallowing in delight,
There is regret.
The place is not appropriate.

4. Fourth Nine
Cause of delight;
Great accumulation obtained.
Be not suspicious.
Gather friends around you,
As a hair clasp holds hair together.

Cause of delight;
Great accumulation obtained.
One’s will is bold enough to fulfill great aims.

Be steadfast and upright, even sick,
Resting upon a solid line.
Still persistent; won’t die.
The central way averts death.

Dark delight reaches the top.
How could it last long?

The name of this gua is Delight, but the Yao Text is not so delightful. The aim of this gua is to expound the principle of harmony and delight. When one has accomplished great achievements and still remains humble, people will be delighted to gather around. However, this gua does not describe a situation of harmony and delight, but gives warning against self-satisfaction. It is too easy for one to indulge in one’s own pleasure and forget the delight of other people. To the Duke of Zhou, delight was not for one’s own sake but for all. The key is humility and sincerity; these two qualities bring harmony. This is the true meaning of Delight.

The image of this gua is Thunder above, Earth below. Thunder is the sound of yang energy. Thus, Confucius says, “The ancient king composed music to honor virtue and merit; with ardent eagerness, he offered it to God.” When thunder bursts above the Earth, myriad beings are nourished by its yang energy and become delighted and alive. It is a time of enthusiasm and delight. An enthusiastic and delighted mood is helpful to one’s success, but overenthusiasm and too much delight cause self-satisfaction. And self-satisfaction can lead to misfortune. For this reason, all the lines in this gua portend misfortune, except the second line.
Taoist Master Alfred Huang

A third-generation master of Wu style Tai Chi Chuan, Chi Kung, and Oriental meditation, Master Alfred Huang is a professor of Taoist philosophy who studied the I Ching with some of China’s greatest minds--only to be imprisoned during the Cultural Revolution in 1966 and sentenced to death. For 13 years in prison Master Huang meditated on the I Ching and found the strength to survive. Released in 1979 weighing only 80 pounds, he emigrated to the United States. Master Huang is the founder of New Harmony, a nonprofit organization devoted to teaching self-healing, and is the author of The Numerology of the I Ching and Complete Tai-Chi. He lives on the island of Maui.

“A careful comparison of Huang’s translation with the Wilhelm, Legge, and Blofeld versions reveals its superiority in nearly every respect. Readers interested in acquainting themselves with the I Ching for the first time need to look no further; those who have formed a deep personal attachment to a previous translation owe it to themselves to explore this one as well.”

“What is constant through this translation is both a sense of tradition and an appreciation of modernity. Throughout is a philosophical calmness, a sense of the intellectual mingling with the spirit of things. Most importantly, Huang makes this a useful I Ching, more useful for the current temperament than older, more self-conscious translations.”

“This translation, from a Taoist master, is the most extensive treatment of the subject I have ever encountered. . . . the quality of the work is so exceptional that it is hard to find fault with it. . . . if you wish to learn this system, this book will be an indispensable aid to your education. There is such a wealth of information contained in this book (each page contains the hexagram being discussed and the ideograph of the name, so there is no confusion) that it is hard to overstate the usefulness of this work. . . . This it is of use and benefit for both the novice and the more experienced user.”

“Huang succeeds, also, in producing a work that keeps opening up new vistas of understanding and inviting the reader to explore the many layers of discovery offered by the mathematical, visual and literary dimensions of the classic.”

“Impressive for its scope and the clarity of its translation, this 10th anniversary edition features a new introduction by Huany on the history and application of the I-Ching, with descriptions of the commentary and divination methods.”

“This book is an absolute requirement for those who rely upon the I-Ching, and most highly recommended as a primary text for anyone wishing to learn how to use it. Highest recommendations to author and publisher - excellent!”