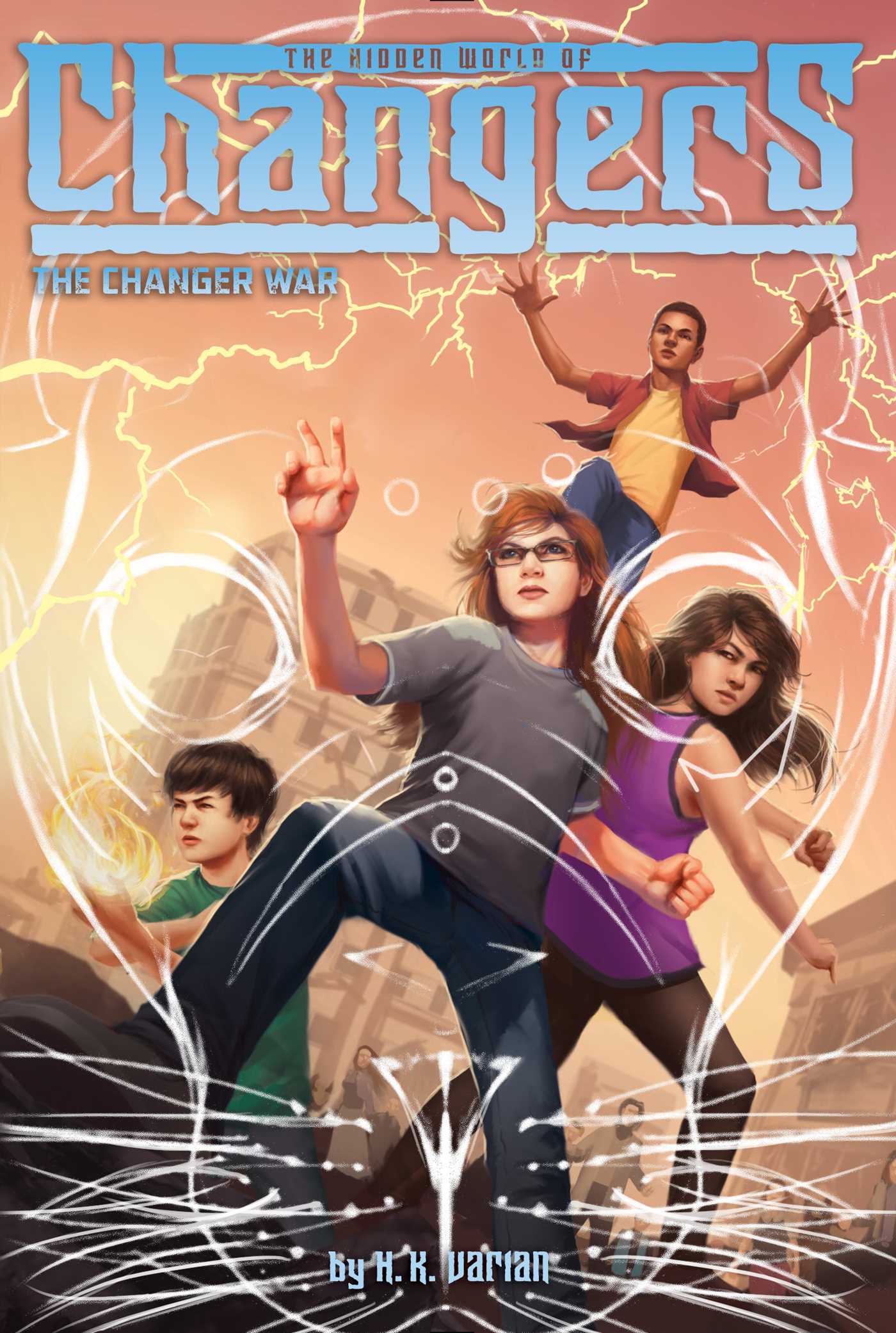 An ancient secret is revealed in the eighth action-packed novel of The Hidden World of Changers series.

War is waging between the Changer Nation and Sakura’s army. It’s the ultimate battle of good vs. evil.

Meanwhile, Darren’s brother has developed impundulu powers, Gabriella must deal with her own emotions, Fiona makes an attempt to unite the selkie faction, and Mack must stay on enemy lines, gathering intel. But when an ancient secret is revealed, at the very heart of the war, it just may be the end of the Changer world as we know it.

Chapter 1 The Lightning
Darren stood in the entrance to his family room, watching lightning zigzag up and down his older brother Ray’s arms. It was impossible, almost, that his brother could suddenly wield lightning—Darren had thought he was the only impundulu in the family—but it was happening nonetheless.

Darren could see the fear in his brother’s eyes. The same fear Darren had experienced when he first came into his powers. He had no idea what was happening and, like Ray, had no control over this bizarre new power.

Darren drew his hands together and called on his own powers to create a ball of counterelectricity. Then he moved his hands apart to make a circle, forming a protective force field around the two of them. It was a success! Even though lightning still emanated from Ray’s fingertips, he could no longer damage anything—or, more importantly, anyone.

Could it be? Darren thought. His mind was racing. Was the curse he’d meant to break in New York City lifted? If his brother suddenly had lightning powers, surely that meant the curse was lifted, that Darren’s Changer bloodline was coming into their powers again, that Ray was an impundulu too—

And if Ray was an impundulu, the curse had to have been lifted. The Spider’s Curse—which Darren had recently learned was pressed upon his family generations ago—made sure that no impundulus in their bloodline came to power. Somehow, Darren’s powers managed to emerge, anyway.

In ancient times a bitter conflict had erupted between the spider Changers, the anansi, and the impundulus for control of a strategic region in Southwest Africa. During the conflict the anansi had cursed many impundulus with a powerful poison contained in their bite. The curse was passed down from generation to generation and prevented all but the most powerful impundulus from being able to transform and discover their Changer gifts.

Darren was one of those powerful impundulus, but he had no other family members who were Changers. No one to help guide him in those difficult and confusing early days.

Even worse, because of that ancient curse, Darren was also unable to benefit from a protection spell that would keep him safe from Sakura’s mind control. So he and the others had flown to New York City by tengu, a bird that commanded the wind and could transport anyone anywhere in the blink of an eye, to meet the descendant of the anansi who had cursed his ancestor. If the anansi agreed to forgive his bloodline, Darren had believed he could be protected from Sakura and her forces with an ancient spell.

Unfortunately, although Esi Akosua, the young anansi in question, was willing to forgive Darren, she didn’t believe that would change anything for him. She had offered forgiveness to other impundulus her ancestors had bitten, yet the curse had remained in place.

Darren tried to think back. Had Esi forgiven him in some different way? Perhaps the fact that they hid from Sakura together made her really mean the forgiveness. That could certainly explain everything!

While things were coming clear for Darren, Ray was still mystified.

Ray stared at his little brother openmouthed. Darren was wielding the same kind of electrical power that was exploding from his own fingertips, and doing a much better job of it.

“Er, you might want to calm down,” Darren said. But Ray didn’t calm down. The lightning in Ray’s palms became more unstable. “Ray, you have to calm down or it won’t stop.”

“?‘Calm down’?” Ray yelled. “What do you mean calm down? There’s lightning running up and down my arms. I can’t calm down! What’s happening?”

How many times had Darren imagined this conversation? Wished that his older brother were an impundulu too? That he had someone to share this new and exciting power with? But in every one of those scenarios, Ray was helping him out, not the other way around. Darren wasn’t sure what to say. He took a deep breath.

“No, we’re Changers,” Darren said. He started to ramble. “I found out on the first day of school. It runs in families, and I thought I was the only one in our family, but then I found out there was a curse that blocked your powers, I guess, and Esi said it wouldn’t work, but it did, and now you’re one of us, and . . .”

Darren stopped and took a deep breath, but Ray didn’t look any less scared and confused than he had a minute ago. There were still sparks crackling from the tips of his fingers.

“What’s an Esi? What are you talking about?” Ray demanded.

I’m no good at explaining this, Darren thought. He had so longed to share this new world with a family member, especially Ray. He had just never thought about having to be the one to explain it all.

I need to get in touch with Ms. Therian. If anyone knows how to explain this—and how to keep Ray in check—it’s her, he thought.

Darren was about to call Ms. Therian when the front door slammed open.

Please don’t be Mom, he thought over and over again. He didn’t want to explain to his mom why her kids were suddenly enveloped in a lightning storm.

Darren recognized that voice. Thankfully, it wasn’t his mom at all—it was Fiona!

For a brief second Darren was happy to hear her, but that was soon replaced with a new worry. I don’t know if I can hold the force field much longer, Darren worried. Fiona could accidentally get hurt.

Ray’s question was cut off by Fiona herself, soaking wet from the storm that raged over their house. But if she was bothered by the rain, she didn’t show it. She used some of the rain droplets to weave a water shield around herself and took a look at Ray.

There was a beat of silence. Then Fiona’s face brightened.

Fiona dropped her water shield and pulled out her cell phone. She dialed Mrs. Therian, but there was no answer. Then she dialed again. Still no answer.

“She’s always by her phone,” Fiona said. “Where could she be?”

An exhausted Darren dropped his guard for a second, and that was all it took. Ray’s powers were too new and unwieldy to control. A stray bolt of lightning burst from Ray’s fingertips and zipped quickly past Darren—right to Fiona.

It all happened in an instant.

Fire. Something smelled like fire. The room was covered in yellow light and then darkened into black. For a brief pause no lightning emanated from Ray. It was like the world froze.

Was she hurt? Darren could barely see her—all he could smell was ash. Like something—or rather, someone—had just been burned. His stomach turned and he feared the worst.

Whew. Fiona was already working on putting out the fire with water when Darren noticed what Ray had hit. It was Fiona’s hair! Fiona’s hair was completely buzzed on one side. For a moment he was scared, but then he couldn’t help but think it looked, well, cool.

But there was more where that came from. Lightning ping-ponged from the wall to the ceiling and back again, all at the speed of—well, light.

“I’m sorry! I’m so sorry!” Ray kept yelling, doing his best to cover up his hands, but the lightning just wouldn’t stop. Instead, with each “sorry,” another jolt came bursting out.

He remembered the time he almost killed Fiona in the ancillary gym where they had their Changer training. He had shot a lightning arrow that missed its mark, shattered an overhead light, and nearly fell into the saltwater pool where Fiona was training. It missed by less than an inch—and Darren felt terrible.

Thankfully, he’d had Ms. Therian’s help then. Darren knew he needed her help again now, more than anything.

Fiona kept calling and calling, but there was no response. It was so unlike Ms. Therian. Fiona tried a few other numbers, but nothing seemed to work.

Darren didn’t know what was going on.

Where are you, Ms. Therian? Darren wondered. We need you.

H.K. Varian has always loved reading about ancient mythology, ruins, and magic. Though H.K. once dreamed of having awesome powers like in Changers, writing became kind of like magic in and of itself. Today H.K. lives, writes, and has adventures in Pittsburgh, though most of them don’t involve battling warlocks, storming castles, or retrieving enchanted objects.