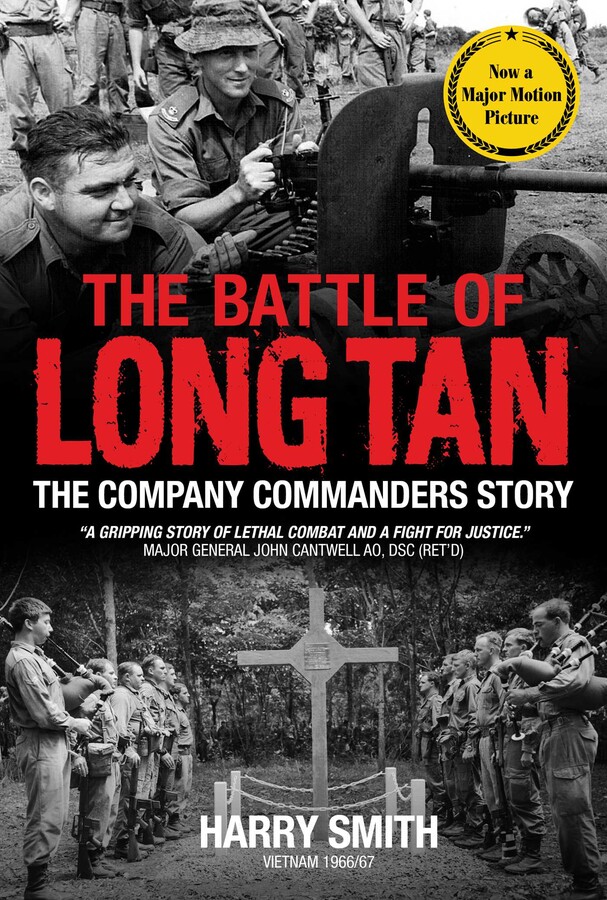 The Battle of Long Tan

On the afternoon of 18 August 1966, just five kilometres from the main Australian Task Force base at Nui Dat, a group of Viet Cong soldiers walked into the right flank of Delta Company, 6 RAR. Under a blanket of mist and heavy monsoon rain, amid the mud and shattered rubber trees, a dispersed Company of 108 men held its ground with courage and grim determination against a three-sided attack from a force of 2,500 Viet Cong and North Vietnamese Army troops. When the battle subsided, 18 Australian soldiers lay dead and 24 had been wounded. Battlefield clearance revealed 245 enemy bodies with captured documents later confirming the count at over 500 enemy killed and 800 wounded. These men were led by a gruff and gusty perfectionist, Major Harry Smith. Now, some 53 years after the battle, Harry tells his story. The Battle of Long Tan is more than just an account of a historic battle. Harry Smith takes his readers on an extraordinary journey — one that ultimately reveals a remarkable cover-up at the highest military and political echelons. The Battle of Long Tan is also Harry’s life story and portrays his many personal battles, from failed marriages to commando-style killing; from a horrific parachute accident through to his modern-day struggles with bureaucracy for recognition for his soldiers. Harry’s battles are tempered by his love of sailing, where he has at last found some peace. The Battle of Long Tan portrays the wrenching, visceral experience of a man who has fought lifelong battles, in a story that he is only now able to tell. Harry can still hear the gunfire and smell the blood spilt at Long Tan. For him, the fight continues.

Lieutenant Colonel Harry Smith SG MC (born 25 July 1933) is a former senior officer in the Australian Army, seeing active service during the Malayan Emergency and the Vietnam War. He was Officer Commanding of D Company, 6th Battalion, Royal Australian Regiment (D Coy, 6RAR) during the Battle of Long Tan on 18 August 1966. After service as a Cadet and National Serviceman, Smith joined the Australian Regular Army as a private soldier and then graduated as Second Lieutenant from the Officer Cadet School, Portsea, in December 1952. He was subsequently posted to the 2nd Battalion, Royal Australian Regiment in 1955 and served during the Malayan Emergency between 1955 and 1957. From June 1966 to June 1967, Smith, then a major, was Officer Commanding D Coy, 6RAR. On 18 August, after heavy mortar shelling of the Australian base at Nui Dat the previous night, companies from 6RAR were sent out to locate the Vietcong units involved. Smith led the 105 soldiers of D Coy and the 3 man NZ Artillery Party out on patrol, but at 3.15pm, while patrolling a rubber plantation at Long Tan that afternoon, they encountered a reinforced regimental-sized Vietcong force (the Viet Cong 275th Regiment, supported by the North Vietnamese Army 806 Battalion and the local D445 Battalion) preparing to advance on the base. Following service in Vietnam, Smith commanded 1 Commando Company at Georges Heights and after overseas training with UK, USA and Canadian airborne units, was posted as CO/CI of the first Army Parachute Training School in 1973. Smith left the Army in 1976 after a parachuting injury and later pursued cruising the east coast and gulf, covering 150,000 nautical miles over 33 years. In 2008, after years of campaigning for better recognition of Long Tan veterans, Smith's MC was upgraded to the Star of Gallantry (the Australian replacement for the Imperial DSO). Two of his officers who fought at Long Tan had their MID awards upgraded to Medals for Gallantry corresponding to the original nominations of MC but his soldiers' awards were not recognised.

The Battle of Long Tan