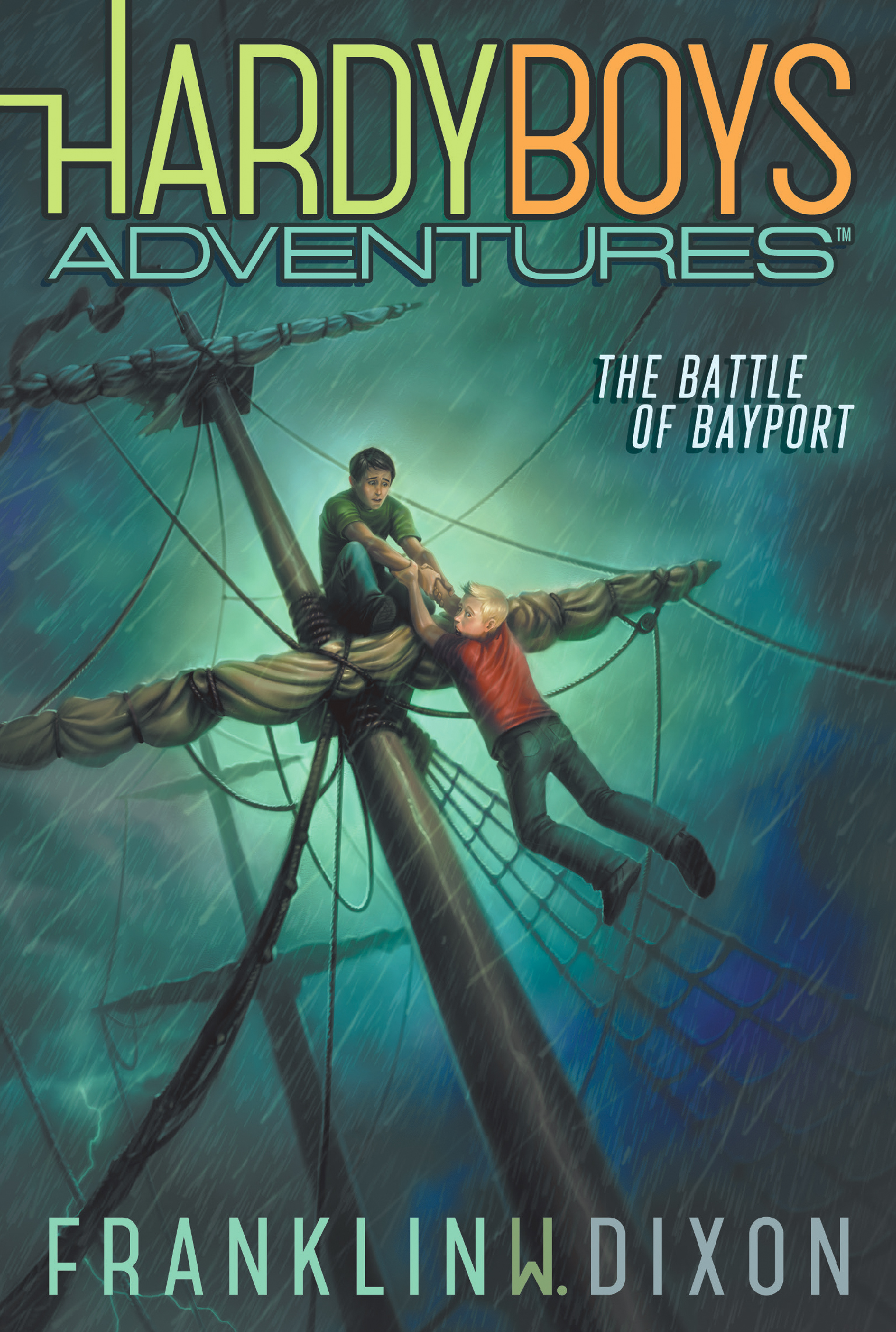 The Battle of Bayport

A reenactment battle marches into Bayport in this Hardy Boys adventure—a fresh approach to a classic series.

Bayport goes back in time when a Revolutionary War-era battleship is discovered, along with a treasure trove of historic artifacts. To celebrate, the town stages a reenactment of the historic Battle of Bayport, complete with antique artillery, canons, and tricorn hats. Even Frank and Joe Hardy are decked out in full Colonial costume, fighting over freedom and taxes on opposite sides of the battle line.

But things get a little too real when a stray shot leaves Bayport’s biggest benefactor, Don Sterling, without a pulse. Wait a minute—weren’t those muskets supposed to be unloaded? And even though the Hardy Boys have technically retired from solving mysteries, they can’t help but get involved, especially when a favorite teacher turns out to be a prime suspect. Is someone trying to frame Mr. Lazin? And who would want Don Sterling dead? Murder by reenactment is one the Hardys haven’t seen before, but don’t think they’re not up for the challenge!

The Battle of Bayport FLASHBACK 1 FRANK
IT’S NOT EVERY DAY YOU get to shoot a cannon at a regiment of eighteenth-century British redcoats. Not in the twenty-first century, at least. But for one day, my humble little town of Bayport had flashed back to the year 1776.

The park overlooking our town’s namesake bay had been transformed into a battlefield with America and Great Britain facing off across center field of the baseball diamond to fight it out over freedom and taxes. Spectators decked out in Colonial garb watched from the bleachers and the hillside nearby, while a Benjamin Franklin look-alike grilled up hot dogs and hamburgers on the barbecue. In the port below, an American flag with only thirteen stars flew from the mast of a huge old Continental Navy warship. It was quite a sight.

I mean, seeing your family, friends, and classmates carrying muskets and dressed up in 250-year-old military uniforms is about as strange as it gets. It felt kind of like the whole town had traveled back in time.

We were reenacting the Battle of Bayport to commemorate our town’s small part in the Revolutionary War (it was more of a skirmish than a battle, really) and to celebrate the grand opening of the new Bayport History Museum aboard the USS Resolve, a beautifully restored sailing frigate from the very first US naval fleet.

The town had gone all out for the event, and it was hard not to get swept up in the excitement. Just about everyone in Bayport had turned out, and many of them were participating, my brother Joe and I included. The Revolutionary War had always been one of my favorite subjects. I was also volunteering at the museum along with the rest of Bayport High’s Young Historians Club, so I have to admit that I felt a real sense of pride standing there in my militiaman uniform. Even Joe, who doesn’t always share my more studious inclinations, had to admit that any event where you got to fire a real musket was pretty cool.

“Freedom schmeedom!” Joe yelled at me from across the field, apparently getting into character as a redcoat rifleman. “That’s the last time I let you have the last doughnut, you ungrateful Colonial freeloader!”

Okay, so maybe Joe wasn’t taking the reenactment as seriously as I was. But we weren’t really here to fight over doughnuts. This was a celebration.

Last year the Bayport Historical Society found a whole stash of Revolutionary War armaments buried in the Resolve’s collapsed cargo hold when they started restoring the ship. There were crates and crates full of muskets, sabers, uniforms, and all kinds of other stuff. They even found the large Colonial flag now flying from the Resolve’s tallest mast, and military correspondence from General George Washington himself. It turns out the Resolve had been transporting supplies and marching orders to Continental troops in the South back in 1776 when the ship was attacked off the coast by the British fleet and run aground.

The Resolve had been a rotting wreck, but the stuff in the crates was in amazing condition. Everyone agreed the find was pretty much priceless. It was a huge deal in the history and archeology communities, and because of it our new history museum was going to be home to one of the world’s most impressive collections of Revolutionary War artifacts. Historians, collectors, and enthusiasts were coming from all over the country for the museum’s opening. One guy was even coming all the way from London.

My AP US History teacher, Mr. Lakin, who also happens to be the president of the historical society, had been the one to open the first crate. After the discovery, there had been a lot of debate about whether to preserve the items or just sell them all at auction for the money. Mr. Lakin finally convinced bigwig Bayport developer Don Sterling and the city council that turning the entire thing, the ship and all, into a world-class museum would do more for the town’s economy than just selling everything off.

Judging by today’s turnout, they had done the right thing. For the reenactment, Mr. Lakin had thankfully ditched his usual plaid-and-polyester outfit for a pristine Colonial general’s uniform. He sat on top of a white horse looking over his troops, beaming with pride under his huge hat.

I was nearby, helping man one of the big cannons. We had a bunch of cannonballs piled in a neat pyramid next to the big old artillery gun, but we weren’t going to be loading them. We were just going to go through the motions, only loading the cannon with a little gunpowder so we could still fire it and put on a good show without anyone actually getting blown to bits in the process. The infantrymen on the battlefield were basically just shooting blanks as well. Everyone agreed that firing live ammunition would have made the reenactment a little too historically accurate.

Well, almost everyone. I could think of a few participants who probably wouldn’t mind shooting at each other. For a small town, we sure do manage to stir up our share of conflicts. Joe and I have witnessed plenty of them firsthand in our unofficial capacity as Bayport’s foremost unlicensed private investigators. Getting mixed up in other people’s beefs is a habit—either a good one or a bad one, depending on who you ask—and us Hardy boys can’t seem to shake it, no matter how hard we try to mind our own business.

There were two people in particular who might like to exchange shots, Mr. Lakin and Don Sterling. The local news even did a report on how their arguments over the best way to run the museum had nearly derailed the whole project. It seemed fitting that they were now facing off across the battlefield as opposing generals.

Joe and I found ourselves fighting on opposite sides of the battle as well. While I was behind the front line manning artillery for the good guys in blue, Joe was up front with the redcoat infantry’s vanguard. Back in the day the two armies had their riflemen line up right out in the open in the middle of a field, like they were getting ready to play a football game or something. Only instead of kicking off a ball, they fired straight at each other with muskets and cannons until the side that was shot up the most either gave up or ran off. It was basically like two big firing squads having a shootout! And then sometimes, whoever was left standing would charge at each other with bayonets and fight hand to hand. Pretty crazy if you ask me.

Joe waved from across the baseball-diamond-turned-battlefield and gave me a salute. I’m pretty sure patriots and redcoats weren’t supposed to salute one another before the battles, but I saluted him back anyway. He was my brother, after all.

Red, white, and blue fireworks burst in the air over the Resolve. It gave me the chills. It meant the battle was about to begin.
Franklin W. Dixon

The Battle of Bayport