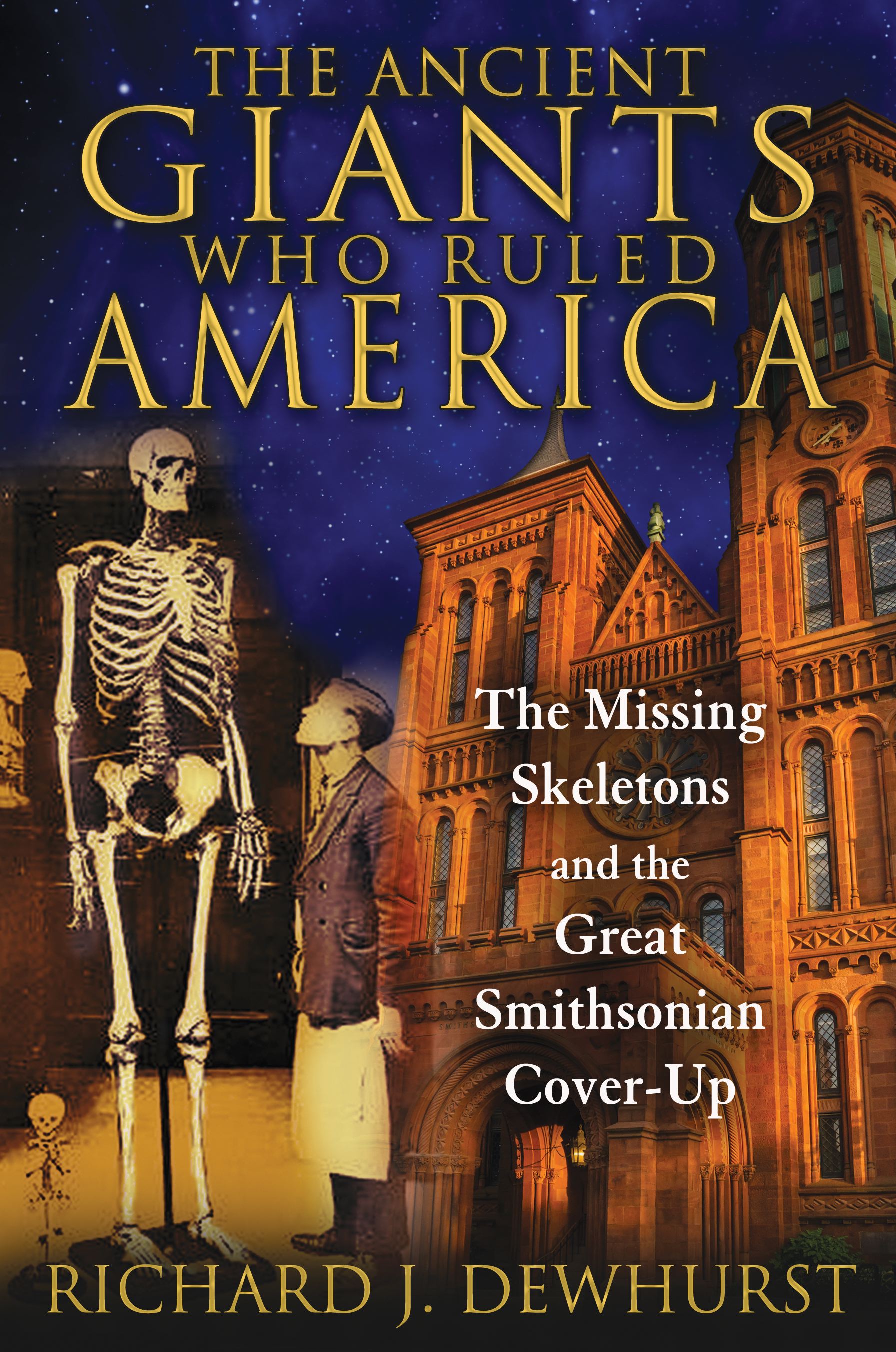 • Shows how thousands of giant skeletons have been found, particularly in the Mississippi Valley, as well as the ruins of the giants’ cities

• Reveals the Stonehenge-era megalithic burial complex on Catalina Island with over 4,000 giant skeletons, including kings more than 9 feet tall

Drawing on 400 years of newspaper articles and photos, first person accounts, state historical records, and illustrated field reports, Richard J. Dewhurst reveals not only that North America was once ruled by an advanced race of giants but also that the Smithsonian has been actively suppressing the physical evidence for nearly 150 years. He shows how thousands of giant skeletons have been unearthed at Mound Builder sites across the continent, only to disappear from the historical record. He examines other concealed giant discoveries, such as the giant mummies found in Spirit Cave, Nevada, wrapped in fine textiles and dating to 8000 BCE; the hundreds of red-haired bog mummies found at sinkhole “cenotes” on the west coast of Florida and dating to 7500 BCE; and the ruins of the giants’ cities with populations in excess of 100,000 in Arizona, Oklahoma, Alabama, and Louisiana.

Dewhurst shows how this suppression began shortly after the Civil War and transformed into an outright cover-up in 1879 when Major John Wesley Powell was appointed Smithsonian director, launching a strict pro-evolution, pro-Manifest Destiny agenda. He also reveals the 1920s’ discovery on Catalina Island of a megalithic burial complex with 6,000 years of continuous burials and over 4,000 skeletons, including a succession of kings and queens, some more than 9 feet tall--the evidence for which is hidden in the restricted-access evidence rooms at the Smithsonian.

In many respects the West Virginia mounds are key to understanding the giants who once ruled America. Not only are the West Virginia mound sites in Charleston, Wheeling, and Moundsville some of the most significant in size and number in United States, but in 1883, the Smithsonian dispatched a team of archaeologists to conduct an extensive dig of the fifty mounds they found there and issue a detailed report.

The team was led by Professors Norris and Thomas, who prepared a detailed report of the work done by scientists who were trained in the excavating of prehistoric monuments, capable of making careful observations, and qualified to write accurate reports. The report shows quite clearly that the team uncovered numerous giants, one of which was 7'6" tall and decorated with heavy copper bracelets. In another mound, they found a circle of ten skeletons surrounding another giant skeleton, as well as underground vaults, various copper and mica ornaments, religious items, pipes and spearheads.

That the ancient giants were considered to be kings and rulers is evidenced by the numerous giant burials where the skeletons have been buried in copper crowns and other regalia such as pearl robes and mica ornaments. In this case, the crowned giants were found buried in a standing position, one of a number of unusual burial positions found in mound builder burial sites.

That the Smithsonian was at the forefront of excavations in West Virginia can be seen clearly from a Charleston Daily Mail feature story, September 23, 1923, which quotes from the Smithsonian’s own report.

CHARLESTON DAILY MAIL, SEPTEMBER 23, 1923
Extending along the terrace about five miles over-looking the Kenawha River west of Charleston, above flood level were found about 50 mounds. They range in height from 5 to 35 feet. The principal one is known as the South Charleston Mound, which is 175 feet in diameter at the base and 35 feet high.

In all it is estimated that there are at least 100,000 mounds in the Eastern portion of the United States. These represent the work of millions of people, many nations and tribes, and they were constructed over a long period of time.

CHARLESTON DAILY MAIL, APRIL 7, 1952
In looking at the history of the South Charleston Mound, it turns out our best source is A. R. Sines, grandfather of Dr. F. A. Sines, Charleston dentist. Mr. Sines, who died in 1937, had a written account of his part in the mound opening published in the 1920s.

“No doubt among the thousands of people who daily pass the large mound at South Charleston,” wrote Sines, “many have often wondered if there is anyone living who can tell what is lying, or once lay, at the bottom of that pile of earth. I am probably the only man now living who stood at the bottom of this mound and assisted with a thorough examination of every foot of its interior from top to bottom in November of 1883.”

EMPLOYED BY THE SMITHSONIAN IN 1883
Mr. Sines related that he was employed to help in the excavation by Col. P.W. Morris, an old Indian scout who was then in the employ of the Smithsonian Institution of Washington. Colonel Morris, former superintendant of the Yellowstone National Park, was investigating all mounds of West Virginia, Ohio, and nearby states at that time. In opening the mound, the men under Col. Morris’ supervision first leveled off the top, then dug a round hole ten feet in diameter downward. As they progressed towards the bottom, they dug out a series of shelves around the sides to have a place to throw the dirt.

“Four feet from the bottom we made our first discovery,” writes Sines. “We came upon a large bed of charred wood, something resembling charred bones, and many small pieces which were more intact resembling burnt teeth. This had, beyond a doubt, once been a funeral pyre.”

6 FEET 8¾ INCHES
The decayed bones belonged to what once had been a most powerful man. There was but little left, but the distance from the spot where the heel bone was found to what was left of the skull was 6 feet 8¾ inches.

The shoulder bones were considerably broader than those of men of our present race, although the skull bone was not so large. The teeth were larger than those we have today. The front part of the skull was nearly double the thickness of a human skull today.

A COPPER CROWN
Sines and Colonel Morris found a copper band around the forehead of this buried giant, and similar copper bands around the wrists and ankles. With no copper nearer than Tennessee, they assumed it had been carried here by these Mound Builders thousands of years ago.

GROOVED STONES HARDER THAN STEEL
They also found axe-shaped stones grooved in the middle. Sines related that this stone was not familiar to this country and so hard that steel would not make a dent.

“Two miles down near where Sunset Memorial Park is today,” Sines relates, “they opened a smaller mound and located the bones of what appeared to be the remnants of a woman. There were copper bands on the ankle and wrist bones and larger pieces of copper on each breast.”
Richard J. Dewhurst

Richard J. Dewhurst is the Emmy Award–winning writer of the HBO feature documentary Dear America: Letters Home from Vietnam. A graduate of NYU with degrees in journalism, film, and television, he has written and edited for the History Channel, the Arts & Entertainment Channel, PBS, Fox Television and Fox Films, ABC News, TNT, Paramount Pictures, and the Miami Herald. He lives in Vermont.

“This is the most comprehensive and level approach to the subject of giant humanoids in Earth’s past to have ever been published. The most appealing aspect is that Dewhurst has collected a vast array of primary sources and presents them here. Reading one newspaper discovery after another of giant skeletons and artifacts is perhaps the most compelling reason to question the standard lines we are given about humanity’s origins. When coupled with his persuasive theories explaining why the Smithsonian would actively cover up such discoveries, you have one valuable and entertaining read! Highly recommended.”

“Giants in ancient America? You bet! It’s all here in Richard Dewhurst’s fabulous book. Extensively illustrated and chronicled with firsthand accounts from early 19th- and 20th-century news clippings, this book will shatter the mainstream academic teachings that continue to ignore and cover up the role giants played in early American history.”

“At last, a comprehensive sourcebook that demystifies the giants of ancient America. Lavishly illustrated, this goliath and gutsy book delivers an unprecedented wealth of information on the great mound builders. Dewhurst digs deeper than the rest. Don’t miss it.”

– Susan B. Martinez, Ph.D., author of Lost History of the Little People and The Mysterious Origins of

“I don’t say this lightly, but of all the nonfiction books I have on my precious shelf space, this book actually has its own little stand so I can gaze at it. I’ve highlighted nearly every page and dog-earred many and hope to use these references in future hypotheses I will present about this amazing and unexplainable race of giants. Thank you, Dewhurst, for such an amazing and laboriously loving research into what I consider one of the single most important anthropological puzzles man has ever tackled.”

“The Ancient Giants who Ruled America is a treasure trove for alternative history and archaeology buffs…This book was an eye-opener, both in its subject matter and also the amount of reporting that Mr. Dewhurst was able to hunt down, covering nearly 400 years.”