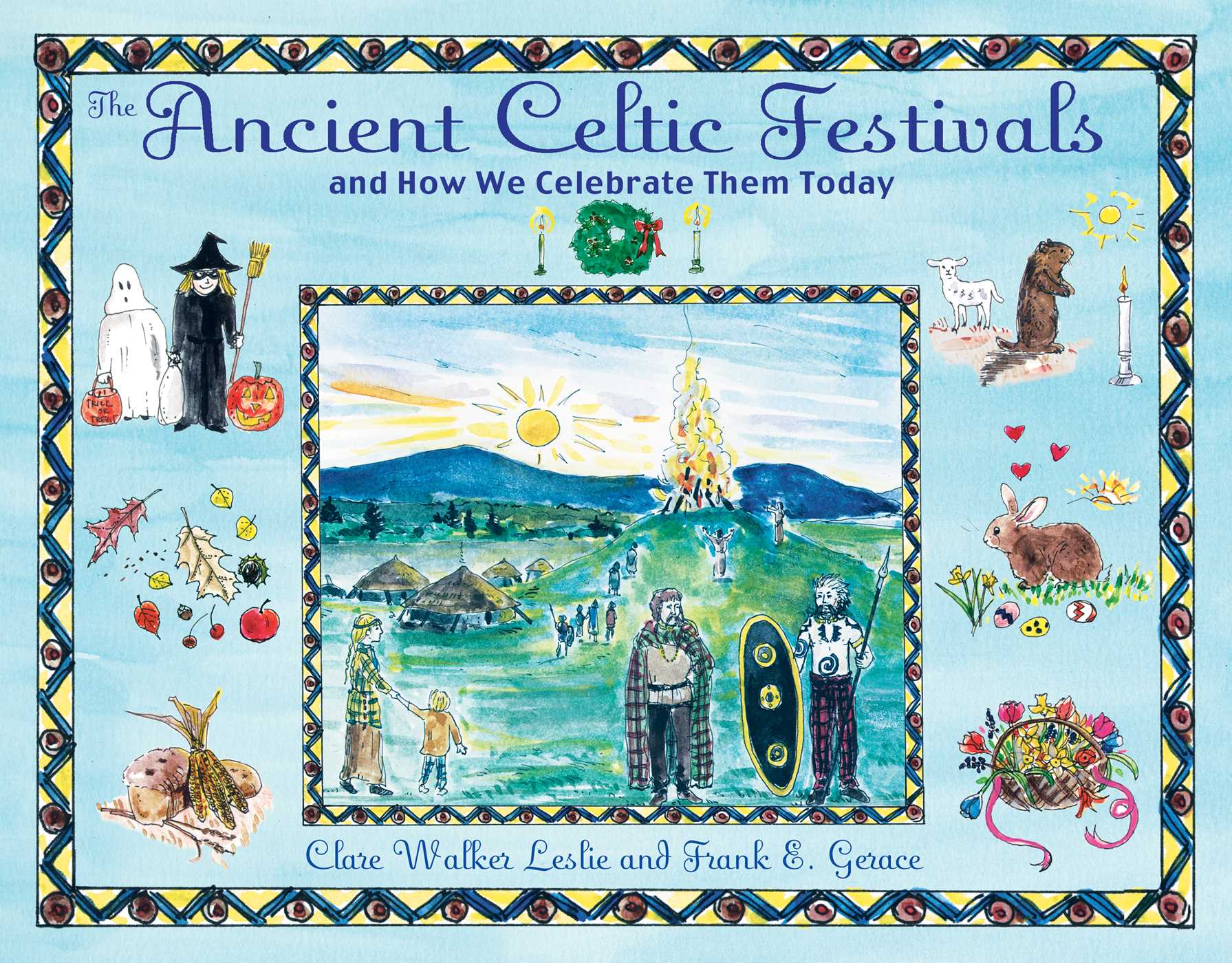 Travel 2,500 years back in time to find out where many of our modern holiday traditions originated.

• Shows how our popular holiday traditions are rooted in nature, beginning as the seasonal festivals of an ancient society.

Children love holiday celebrations but most don't know why they wear masks on Halloween or watch for the groundhog on February 2. Now they can discover that many of our modern traditions started with the festivals of the ancient Celts. The Celts were farming people, so their festivals marked the important events of the agricultural year. Imbolc, in very early spring, celebrated the birth of new lambs, while Samhain, in late fall, celebrated the end of the growing season and the beginning of winter. If we look at our modern calendar, we'll find Groundhog Day falling where Imbolc did, Halloween where the Celts celebrated Samhain, and a host of other holiday correspondences. That's because descendants of the Celts were among the first Europeans to settle in the New World, bringing their holiday traditions with them.

In a world of electric lights and store-bought foods, The Ancient Celtic Festivals can help children make the connections to nature that their ancestors did. Whimsically illustrated activity pages invite them to bake a harvest corn bread, stage a spring festival, or warm up the cold depths of winter with hot spiced cider. Teachers, librarians, parents, and children alike will welcome this book as a fun-filled resource.

The festivals just described came out of traditions begun long, long ago--as much as 2,700 years ago! As peoples moved to different lands and took on differing religions and customs, these festivals changed and evolved. But they are still celebrated at the same times of the year.

• Imbolc became the Christian Candlemas and the folk legend of Groundhog Day, set on February 2.

• Beltane became a general spring festival, May Day, and Lady Day, in honor of the Virgin Mary, set on May 1.

• Lughnasa became a countryside celebration of the harvest, set with Saint John’s Day on August 1.

In colonial America, the Puritans banned these festivals because of their non-Christian origins. With the large Irish immigrations in the 1840s, the Old World Celtic traditions began to seep back into the culture of those living in the New World. Today, with the increased commercialization of these celebrations, it can be difficult to determine exactly what has been done traditionally and what is part of our modern culture. We will talk about the modern celebrations in the same order that we talked about Samhain, Beltane, Imbolc, and Lughnasa to remind ourselves of their Celtic origins and of what was important to the Celts, the division of the year into dark and light, winter and summer (see page 15).

All Hallows’ Eve, or Halloween, comes from the early Christian adaptation of the most important festival of the Celtic Year, Samhain. Sometime after a.d. 400, All Hallows’ Eve was spent in church praying for the souls of the dead. November 1 and November 2 were spent visiting the graves of the dead. In Spanish-speaking cultures in North, Central, and South America, El Dia de los Muertos (The Day of the Dead) is celebrated on November 2, with whole families spending the night in cemeteries to honor the souls of their ancestors. In Italy, the Roman festival of Pomona, the goddess of fruits, was celebrated around November 1, with similar overlaps in customs to the celebration of Samhain by their neighbors to the north.
In the ninth century a.d., Pope Gregory IV placed All Saints’ Day and All Hallows’ Eve in the church calendar. Increasingly, throughout medieval Europe and here in the colonies of early America, all celebrations on October 31 that were not church related were condemned. But in rural areas in Ireland, Scotland, Wales, and parts of England, folk customs continued well into the twentieth century. It is some of these folk traditions that we describe on the following page. Our customs of trick-or-treating and Mischief Night pranks come from folk culture.

Witches did not exist in the early Celtic cultures. The word witch comes from an old Anglo-Saxon word, “Wicca,” meaning wizard. In early cultures wizards, sorcerers, druids, shamans, and witches were wise advisors of a community who understood the rhythms and mysteries of life in the world of nature. Witches were associated with Halloween by the Medieval Church as they celebrated the Celtic Year’s End festival of Samhain. Witches could be young, old, pretty, ugly. Often they helped the sick and delivered babies.

Bonfires were lit on hilltops to ward off evil spirits out stealing milk, destroying the crops, and harming livestock. Pranksters and mischief makers roamed countrysides dressed in costumes playing tricks on neighbors. Blame was placed on “spirits” abroad.

Trickster--the countryside prankster. Similar costumes are still worn at Mardi Gras in America and at Carneval in Europe.

Trick or treat evolved from an Irish custom of groups of peasants going from house to house asking for money and food in the name of Muck Olla, an Irish god, and later, in the name of Saint Columba, a sixth-century priest.

Candles put in rutabagas to scare away spirits--today we use pumpkins.

• Locate sunrise and sunset times for your area. Compare with Beltane times.

• Light an orange candle. Blow it out. Think of all the fires extinguished and relit over the ages to honor the year’s end. Relight one hour later as a sign that the New Year has begun.

• Cut apples in cross section to float in hot cider, a drink common in Medieval Europe. Find the five-pointed star, an ancient symbol of the Goddess and protection.

• Leave a saucer of milk out for the faerie folk or spirits abroad--to please them.
Clare Walker Leslie

Clare Walker Leslie is a nationally known naturalist, wildlife artist and educator. She is the author of the popular children's book Nature All Year Long, as well as six books for adults on observing nature and nature drawing. She divides her time between Cambridge, Massachusetts and Granville, Vermont.

Frank E. Gerace has studied the Celts in myth and legend for twenty years. He lives in Allston, Massachusetts.

"An enormously engaging and informative book. The Authors have included aspects of science, history, mythology, and literature in their explanation of Celtic festivals. . . . will provide the answers for all the children and adults who ever wondered about the mysterious rituals of some of our most well-known holidays. A valuable resource for homes, schools, and libraries."

"This is a charming and delightful book for adults and children alike. In a simple manner, the authors trace many of our festivals to their Celtic and European roots."

"Frank Gerace and Clare Walker Leslie have put together a wonderful and much needed introduction to the magical year. I warmly recommend it to all in need of a good, accurate, and clearly presented guide."

– John Matthews, author of Drinking from the Sacred Well

"One of the best books that a Celtic parent could give to their child."

". . . teaches kids without dumbing down the history."

"A good book for families and teachers."

"Highly recommended. This is a good book for kids. I'd recommend it for parents and educators alike."

"This is an excellent selection for Pagan parents looking for material to help them introduce the Wheel of the Year to their children."

"This is lavishly illustrated with color drawings. It explains the natural science and astronomy behind the seasons. The author also explains how we got calendars. [The Ancient Celtic Festivals] presents engrossing history of the Celts, their practices, and traditions."