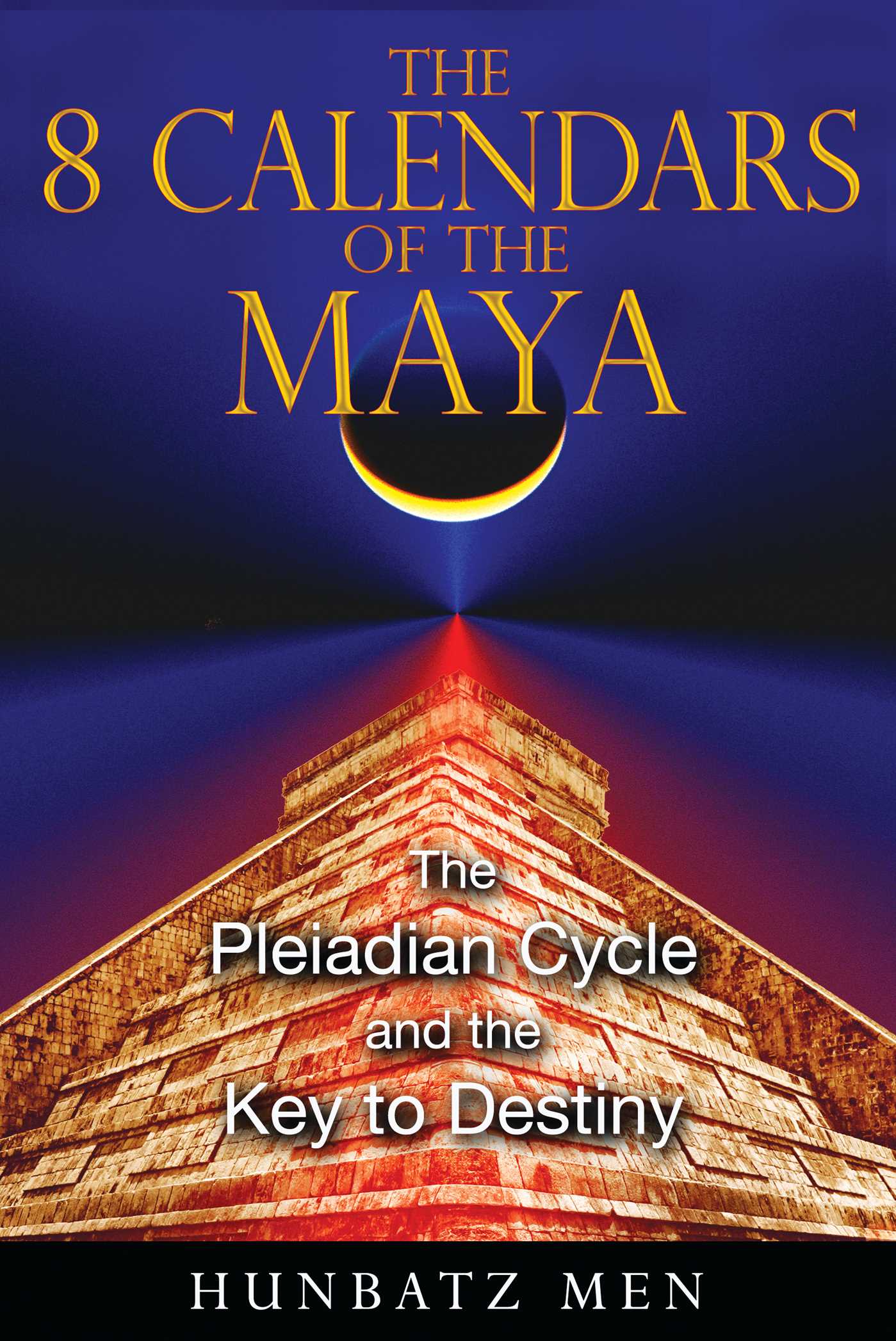 • The first book to reveal the secrets of the Mayan Pleiades calendar: the Tzek’eb

The Mayan Calendar has taken on special prominence with the imminent arrival of 2012, a date that many claim is the end of that calendar. However, as Mayan elder and daykeeper Hunbatz Men shows, the cosmological understanding of his ancestors was so sophisticated that they had not one, but many calendars, each based on the cycles of different systems in the cosmos. In this book he reveals for the first time the Tzek’eb, or Pleiades, Calendar of 26,000 years, which charts the revolution of our solar system around Alcyone, the central star of the Pleiades system. He also discusses the K’uuk’ulcan Calendar of the 4 seasons of the solar year and the wheel of the K’altunes Calendar, which is composed of 13 cycles of 20 years each that form a calendar of 260 years.

In traditional Mayan culture the computation of time was not determined by simple economic or social motives. The calendars served the higher purpose of synchronizing the lives of human beings and their societies to the great cosmic pulsation, to the rhythm of the annual seasons, and to the other cycles that dictate changes upon Earth. Mayan understanding of the cosmic cycles was so exact that this knowledge could be used to influence all stages of life--from planning when to conceive (parents could choose not only the sex of their child but its vocation and future destiny) to plotting out the course of the entire society. Pyramids played a crucial role in applying this wisdom because, as Hunbatz Men shows, they were able to produce and transform energy in accordance with the cosmic cycles charted by the calendars. This book reveals for the first time the wisdom of the multi-calendar Mayan system and how it can help guide our modern world.

The Synchronized Calendars of the Mayan People

The group of stars currently known as the Pleiades or Seven Sisters was, in the time of the Mayans, known as Tzek’eb and was symbolically represented by the seven rattles of the serpent. Since the beginning of their existence, the Mayan people viewed the Pleiades as their axis of life on Earth and consequently included these stars in their calendars; they also included the number seven in their culture in a pervasive and profound manner. The seven stars of the Pleiades were very important for the Mayans because, according to their beliefs, life began on planet Earth at the same time that these stars first settled in their place in the sky.
The scientist Otto Hesse tells us that the Pleiades, located in the constellation of Taurus, are centered around Alcyone, a giant star with a brilliance 1,400 times that of the sun. Further, Hesse claims that our solar system is actually part of the system of the Pleiades, and that the sun occupies the seventh orbit in this System. Significantly, once again, the number seven is present in this relationship between our solar system and the Pleiades. Hesse states that our solar system revolves around Alcyone every 26,000 years and also that our solar energy is influenced by Alcyone, which is at the center of the Pleiades. These facts Hesse mentions were very well known to the Mayans, as is demonstrated by their astronomical calendars.
According to my investigations, the Tzek’eb Calendar began on March 21 of the year 3373 BCE, when our Mayan ancestors saw the great sun of the solar system of Maia above the horizon of our sun. It is worth noting that in the Mayan tradition, our Father Sun had seven brothers; together we all form a single great cosmic family. Since the Pleiades are composed of seven principal stars, or suns, the Mayans deduced that each of these suns deposited its energetic power in us when we human beings were formed, meaning that we in fact possess the power of these suns. We each have these seven powers of our solar family within our bodies. In fact, all manifestations of life include this seven energy.

Representing the principle of life on planet Earth, the Pleiades became the cultural axis of the ancient Mayan people. Their religion and mathematics, as well as their physical bodies, were intimately connected with the seven stars or suns of the Pleiades. All of the Mayan mathematical and astronomical calendars were closely connected to the Pleiades. Though the Mayans had many calendars, behind them all was the calendar of the Great Year of 26,000 years, the time our sun takes to complete a single revolution around Alcyone, with all the planets accompanying it. This Great Year is also known as Tzek’eb in the Mayan language.
There were abundant reasons for the Mayans to call themselves Children of the Sun; as we have seen, they were well aware of solar laws. The Tzek’eb Calendar was a cosmic calendar of the suns, established by the great Mayan astronomical sages and used to keep track of the great solar cycles, 26,000 years in duration. For the Mayans, each sun has a cycle of 26,000 years. And according to the Mayans, when the end of a solar cycle is reached, great changes occur in our planet Earth, and very probably in our entire solar system. We are currently in the fifth sun, according to our cosmic Tzek’eb Calendar, which tells us that Four suns, or four 26,000-year solar cycles, have already passed. This means that 104,000 years have passed according to the Mayan cosmic calendar.

Tzek’eb and the Pyramid of Kukulcan

The Pyramid of Kukulcan in Chichén Itzá, Yucatán, Mexico, has a close relationship to the Pleiades or Seven Sisters and therefore to the Tzek’eb Calendar. Fifty-two great marks can be seen on each of the four sides of this pyramid. This number, fifty-two, is related to the Tunben K’ak’ Calendar, translated as “New Fire.” The indigenous peoples of the Americas celebrated the cycle of this calendar every fifty-two years, since fifty-two years represented a complete lesser cycle of the Pleiades or Tzek’eb.
Every year, on March 21 and September 21, at the equinoxes, seven markings were seen, produced by the light and darkness of the Pyramid of Kukulcan as the sun began to set in the west. This phenomenon took place on the north side of the pyramid; seven triangles appeared on the side of the steps that were used for climbing the edifice. We know that these Mesoamerican peoples performed great rituals at the equinoxes, when the seven isosceles triangles appeared on the Pyramid of Kukulcan. But the most important rituals were celebrated every fifty-two years.
The ancient Itza Mayans built the pyramid at Chichén Itzá in order to observe the movements of the planets and other celestial bodies. They made it in order that they might be continually aware of the planetary movements; Chichén Itzá, Mexico, was the center of this learning. The Chilam Balam and the Hauk’in were the astronomers who were responsible for this scientific place. All that they observed was used to educate the public; thus the Mayan people were taught the secrets that the scientists were discovering, secrets that were recorded in writing in the Mayan codices.
Hunbatz Men

Hunbatz Men (1941-2016) was a Mayan daykeeper--an authority on the history, chronology, and calendars of Mayan civilization. He was also a ceremonial leader, founder of the Mayan indigenous Community near Mérida, Mexico, and the author of Secrets of Mayan Science/Religion and The 8 Calendars of the Maya.

“As a traditional Mayan teacher and daykeeper, Hunbatz Men sheds light on the great mystery of Maya/Cherokee oral tradition--the sacred relationship between Earth and the Pleiades. In our sacred tradition, our lives synchronize with the whole cosmos because our Sun is part of the Pleiadian star system. When our hearts are open to our cosmic home, we resonate with the sky’s heart, Alcyone, the central star of the Pleiades. This is what I was taught by my Cherokee grandfather Hand, and now Hunbatz Men elucidates the Tzek’eb, the calendars of the Pleaidian Suns. This is a must read for anyone who wonders why humans on Earth feel they are in touch with the Pleiadians.”

– Barbara Hand Clow, author of The Mayan Code: Time Acceleration and the Awakening of the World Mind a

"Who better than an indigenous Mayan daykeeper to teach us the purpose and meaning of the Mayan calendars? . . . . In explaining the four Pleaidian eras, or suns, he reminds us that this knowledge is sacred and asks that the calendars be respected and used for the benefit of all."