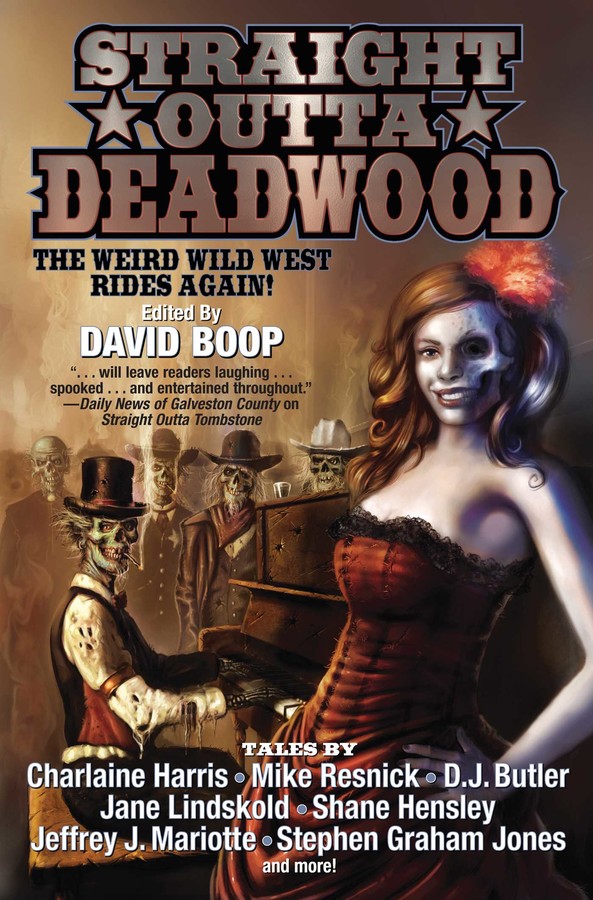 THE WEIRD AND WILD RIDE AGAIN!

First there was Straight Outta Tombstone. Now we venture to an even wilder frontier town: Deadwood and its creepy environs. And to do so, here’s an all-new posse of top authors to explore it with. Charlaine Harris gives us a glimpse inside her new series as a tormented gunfighter faces a true demon of her past. Mike Resnick reveals what Doc Holliday thought was so funny on his last day. Jeffrey J. Mariotte introduces us to a man who specializes in pictures of the dead who won’t stay dead. Meanwhile, Jane Lindskold teaches us not to underestimate a schoolmarm when her students are in jeopardy. And Shane Lacy Hensley cooks up a stew that threatens to send all the famous lawmen in history to their graves!

These and a dozen more stories of how the West was wilder than any history book could contain. The West that once was rides again—but this time with the West that could have been chasing after like a spitting hellcat on its tail!

"With stories from Charlaine Harris, Mike Resnick, Stephen Graham Jones, and others, this anthology of Western horror may find fans in both genres."—Booklist

“The authors were having fun. Even when they are not playing the stories for laughs, they are taking an opportunity to enjoy an opportunity to tell a story with a fresh twist, and expand out of their expected boundaries. Straight Outta Tombstone is a change-up pitch [that] will leave readers laughing on occasion, spooked at times, and entertained throughout.”—The Galveston County Daily News