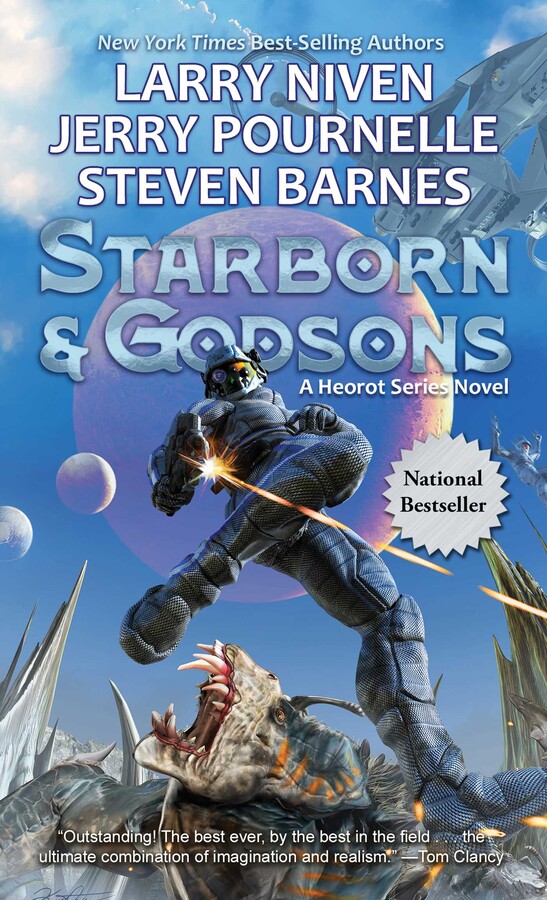 WE HAVE MET THE ALIENS—AND THEY ARE US!

Avalon was finally thriving. The cold-sleep colonists from Earth had settled on a verdant, livable world. The fast and cunning predators humans named grendels were under control, and mainland outposts had been established. Humans would have hydroelectric power, some form of civilization. They would survive. But they would not survive as a spacefaring people.

What the colonists were losing fast was the ability to get back to space. But unbeknownst to the planet-bound humans, something was moving out there in the stars, decelerating at a rate impossible for a natural object. Its destination: Avalon. Its probable origin: Earth's Solar System. The passengers it carried would change this world forever.

Between the human Starborn and the self-named Godsons who followed on. Between the initial generation of Avalon-born humans and their descendants. And, unbeknownst to either, between humans and the almost ineffably alien species native to their new world. For this world is not done challenging humanity yet.

THE CHALLENGE AND PROMISE OF AVALON ARE ONLY BEGINNING.

“. . . this work thoughtfully builds on the vision of the future . . . to the thrilling climax. This excellent series finale sticks the landing.”—Publishers Weekly, starred review

". . . gritty, realistic, and exciting storytelling from authors who matched Michael Crichton back in the day for page-turning suspense."—Booklist, starred review

“. . . a classic Pournelle story. Each group, Earthborn, Starborn, and Godsons have secrets they are keeping from the others, sometime deliberately, at other times inadvertently. Each group is blinded to some extent, by their biases and beliefs. Each has something the other groups need, but does not realize it. . . . a tale of the strengths and weaknesses of human societies.”—The Galveston County Daily News

About prequel The Legacy of Heorot:

"Page-turning action and suspense, good characterization and convincing setting . . . may be the best thing any of those authors has written.”—The Denver Post

“Outstanding! . . . The best ever, by the best in the field . . . the ultimate combination of imagination and realism.”—Tom Clancy

"Few writers have a finer pedigree than those here . . . As one might suspect, Beowulf's Children is seamless . . . absorbing, substantial . . . masterful novel."—Los Angeles Times

"Possibly the greatest science fiction novel I have ever read."—Robert A. Heinlein on The Mote in God's Eye

"The scope of Larry Niven's work is so vast that only a writer of supreme talent could disguise the fact as well as he can."—Tom Clancy

"Niven is a true master."—Frederik Pohl

"Jerry Pournelle is one of science fiction's greatest storytellers."—Poul Anderson

"On the cover . . . is the claim 'No. 1 Adventure Novel of the Year.' And well it might be."—Milwaukee Journal on Janissaries

"Profound and exhilarating."—Maurice Broaddus, author of The Knights of Breton Court

“Barnes gives us characters that are vividly real people, conceived with insight and portrayed with compassion and rare skill, and then he stokes the suspense up to levels that will make the reader miss sleep and be late for work.”—Tim Powers

“[Barnes] combines imagination, anthropology and beautiful storytelling as he takes readers to the foot of the Great Mountain, today known as Mount Kilimanjaro.”—Durham Triangle Tribune on Great Sky Woman

Jerry Pournelle was a master of military science fiction, author of the series of novels about John Christian Falkenberg and his legion of interstellar mercenaries and many other works, such as Janissaries, Exiles to Glory, High Justice, King David's Spaceship, Starswarm, and others. With Larry Niven, he collaborated on a string of best-selling novels, including Lucifer's Hammer, The Mote in God's Eye, Footfall, and many more. He held advanced degrees in psychology, statistics, engineering, and political science, and was actively involved professionally in all these fields.