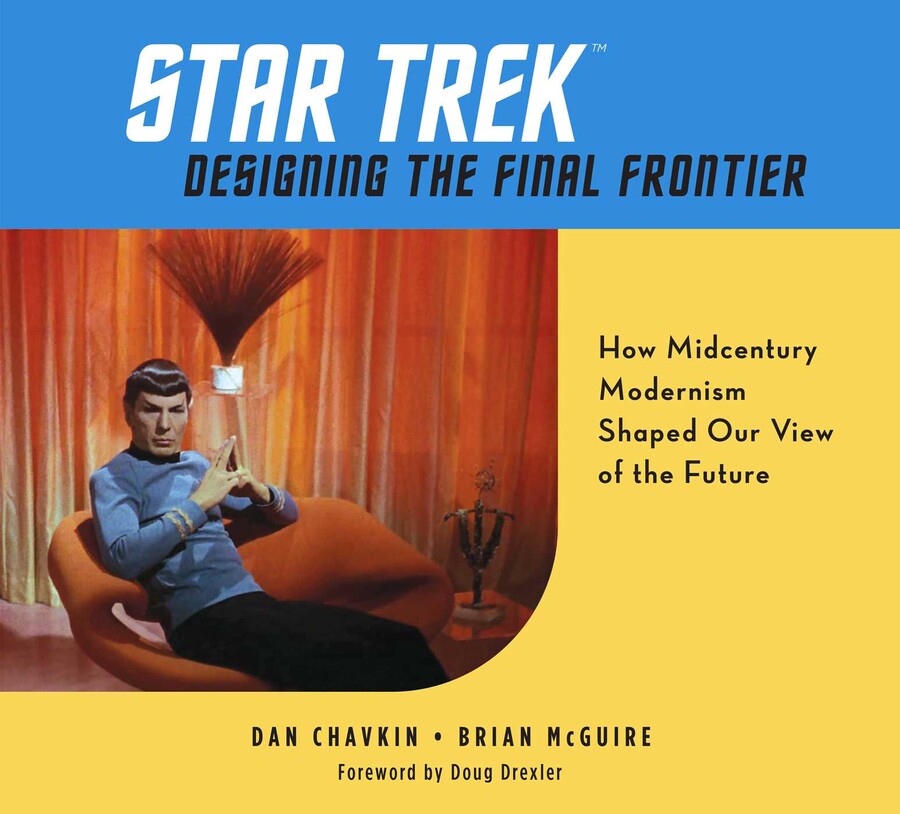 How Midcentury Modernism Shaped Our View of the Future

Celebrate Star Trek: The Original Series and the show’s distinctive Midcentury modern design that would change design– and television–forever.

Star Trek: The Original Series (1966-1969) was the first installment of one of the most successful and longest-running television franchises of all time. Today, Trek fans champion its writing, progressive social consciousness, and aesthetic. Designing the Final Frontier is a unique, expert look at the mid-century modern design that created and inspired that aesthetic. From Burke chairs to amorphous sculptures, from bright colors to futuristic frames, Star Trek TOS is bursting with mid-century modern furniture, art, and design elements—many of them bought directly from famous design showrooms.

Together, midcentury modern design experts Dan Chavkin and Brian McGuire have created an insider’s guide to the interior of original starship Enterprise and beyond, that is sure to attract Star Trek’s thriving global fan base.

DAN CHAVKIN began his photographic career in 1992, studying at the prestigious school Art Center College of Design in Pasadena, California. Upon graduating, he moved to New York City to work as a professional photographer, shooting celebrity portraiture for various top magazines. An avid aficionado of all things modernist, Dan began collecting midcentury modern furniture, and vintage film posters, book covers, and periodicals as a way of feeding his passion for modernism. Returning to Los Angeles, his photographic work consisted of human-interest stories for numerous national publications and advertising campaigns. In the summer of 2008, upon a trip to Palm Springs, Dan discovered the wealth of midcentury modern architecture in the same desert city he had often visited as a child. Inspired by the architecture and its relation to the landscape, he began photographing the many examples of midcentury modern architecture in Palm Springs and throughout Coachella Valley. Since then, Dan has received critical acclaim for his architectural work from numerous modern preservation organizations, magazine publications, and modernist homeowners alike. In 2014, he co-authored a book on the husband-and-wife midcentury modern designers Jerome and Evelyn Ackerman, titled Hand-In-Hand, and in 2016, Dan published Unseen Midcentury Desert Modern, a photographic survey of hidden, often overlooked, desert modern residences, buildings, and houses of worship throughout the Coachella Valley.
Dan lives and works in Palm Springs, California.

BRIAN MCGUIRE earned both his undergraduate degree in Molecular Biology and doctorate in Biochemistry from Vanderbilt University. During his career in new drug development, he generated numerous publications and abstracts for technical journals. In 2006 he acquired one of the all-steel houses designed by Donald Wexler in Palm Springs, where he became active in several preservation organizations. Through this, he developed an amateur appreciation for midcentury architecture and design. In 2012, he successfully got his Wexler-designed house listed in the National Register of Historic Places, engaging photographer Dan Chavkin for the application. McGuire currently lives in the Santa Rosa Valley area of Ventura County, California, and is also a part-time resident of Kansas City, where he grew up an avid Star Trek fan.

"A captivating and exceptionally well-researched examination of the original, legendary STAR TREK television series from a fresh perspective – previously unexplored in TOS literature – that focuses on the many beautiful and iconic works of Midcentury Modernist art and furnishings that are intrinsic to the show’s presentation of life in the 23rd century." --

“Here is the one book we wish we had written.  This delightfully illustrated and incredibly well-researched treatise is, as Mr. Spock might assert, quite ‘fascinating.’  The book's authors have meticulously cataloged, episode by episode, both the obvious and fleeting appearances of 20th century modernist design: the result is an indispensable handbook that will allow you to go on a design 'scavenger hunt' each time you watch your first favorite sci-fi TV series." --Ron & Barbara Marshall, 20th century design and architecture authors

How Midcentury Modernism Shaped Our View of the Future