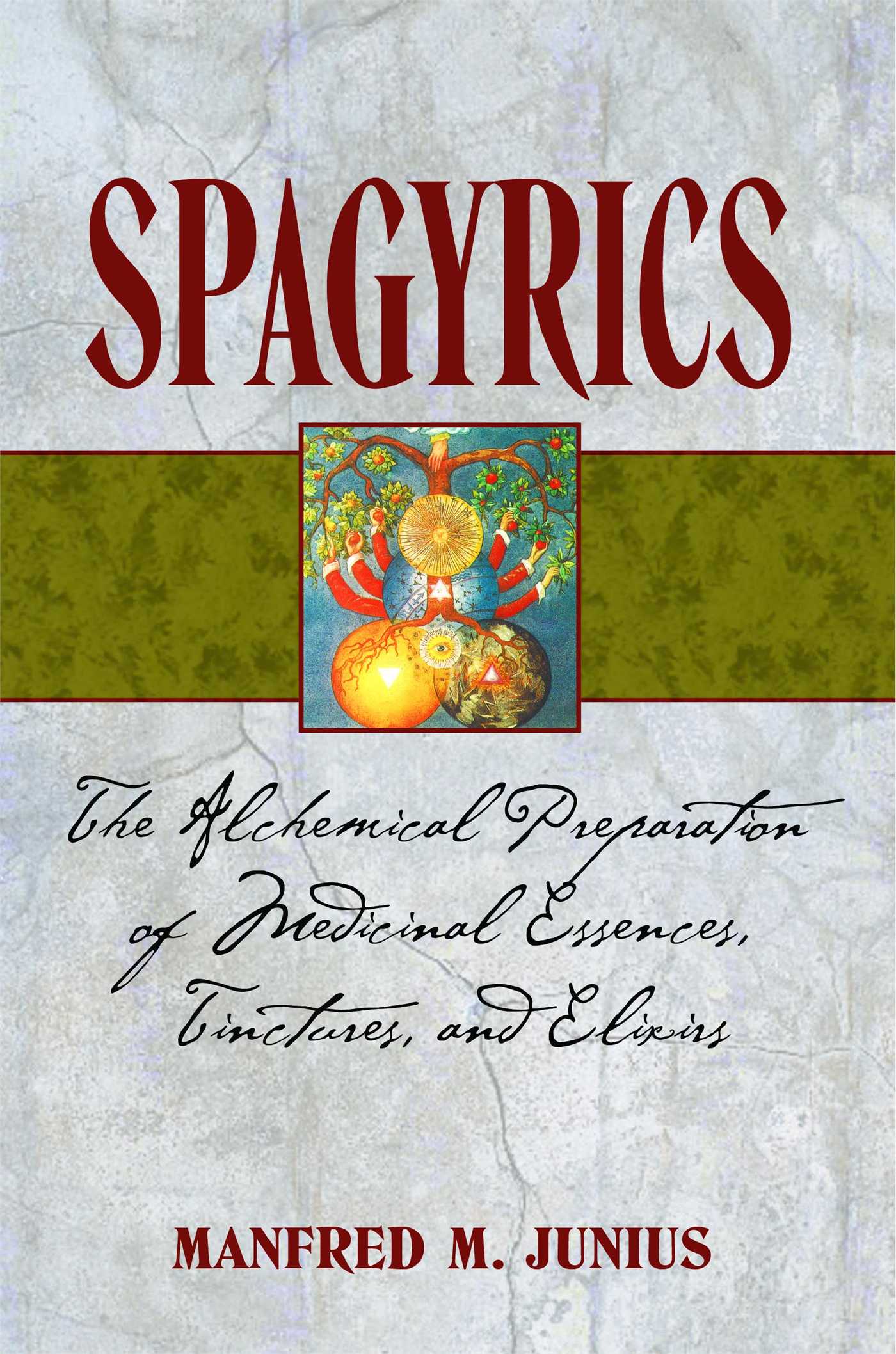 A comprehensive alchemical guide to plant extractions and their health benefits

The practice of spagyrics is the application of ancient alchemical working methods to the preparation of tinctures, essences, and other products from medicinal plants. While ordinary tinctures and infusions use only a part of the great curative potential of plants, spagyric methods “open” medicinal plants completely to reveal their more powerful healing properties. Drawing on the rich imagery and symbolism of ancient source materials, Manfred M. Junius describes these methods in great detail, showing readers how to prepare plant remedies alchemically for their own use as well as imparting a knowledge of the ideological world in which alchemistic and hermetic thought flowered. Spagyrics includes the Plant Magistery of Paracelsus and the Life Elixir recipe of Andreas Libavius among its historic techniques as well as a wealth of scientific information that demonstrates the greater efficacy of alchemical methods of plant essence extraction. This classic source text preserves the nearly forgotten but highly valuable methods of this true hermetic art for preparing natural remedies.

Therefore, learn Alchimiam, otherwise called Spagyria, which teaches you to separate the false from the true.
--Paracelsus

In the word spagyria two Greek words are hidden: spao, to draw out, to divide; and ageiro, to gather, to bind, to join. These two concepts form the foundation of every genuine alchemical work, hence the often-quoted phrase “Solve et coagula, et habebis magisterium!” (Dissolve and bind, and you will have the magistery).

The alchemical work always takes place in three stages: (1) separation, (2) purification, and (3) cohobation (recombination, or the “chymical wedding”). In the spagyrist’s view, these actions lead to an increase and a release of certain curative powers in the initial species.

Spagyrics is the application of alchemical working methods to the production of medicaments.

When we learn that the famous physician Theophrastus Bombastus von Hohenheim, better known as Paracelsus (c. 1493–1541), prepared a large part of his famous medicines according to spagyric methods, we must thereby understand a very high level of the hermetic art. This hermetic art has little in common with vulgar alchemy, which is often disparagingly called “the art of goldmaking.”

The beginnings of this true hermetic art are to this day shrouded in obscurity. We know that the hermetic-spagyric method of preparation was known to many ancient cultures. In ancient China, in India, and among the ancient Egyptians, we find important contributions to alchemical medicine. Between the ancient Indian and Chinese alchemy there exist many parallels. In India, alchemical preparations are part of the southern Indian siddha medicine, of Ayurvedic medicine and also of Unanı medicine, which came later to India through the Muslims and represents a further development of ancient Greek medicine.

The alchemy of the Western schools is chiefly based on the Egyptian tradition. In ancient Egypt, hermetism was taught in the temples of Memphis and Thebes. From the writings of Zosimos of Panopolis (Akhmin, A.D. 300) we learn that alchemy was practiced in Egypt under the supervision of kings and priests, and that divulging the secrets of this art was against the law. The hermetic art was taught exclusively by oral transmission.

The Arabs were the chief agents for transmitting theoretical and practical alchemy to the Europeans, who then merged it with the Christian tradition.

Among the historically accessible European sources, special mention must be made of the writings of Paracelsus. Before the much older Indian and Chinese traditions became known in the West, the Paracelsian writings constituted the earliest information that could be dated with certainty. In his book Paragranum, Paracelsus says: “The third foundation upon which medicine rests is alchemy. If the physician does not have good ability and experience in it, his art is in vain.”

How do spagyric plant remedies differ from nonspagyric ones? Ordinary tinctures, infusions, decoctions, and the like, utilize in part the curative powers of the plants from which they are prepared. The spagyric preparation “opens” the plant and by its own process liberates stronger curative powers. It is in principle synergistic, and less interested in isolated pharmacologically active principles. We cannot do justice to the methodology of spagyrics if we measure it according to the standards of analytical chemistry or pharmacology, even if these sciences can explain in their own way part of the effects of spagyric remedies. Just as homeopathy has its own findings, experiences, and laws, which cannot be comprehended solely by the prevailing chemical-analytical knowledge, so, too, does spagyrics insist on its own standards, for which it has its own conceptions and symbols. In the case of many of these conceptions and ideas we are dealing with analogies, which, however, prove to be extremely valuable.

We must not consider spagyrics and alchemy as a whole merely a preliminary stage of the later scientific chemistry. It is rather another way of looking at nature and its powers. We easily succumb to the temptation to judge the whole alchemical knowledge of the past by the criteria of the current stand of Western science, which leads to a distortion or an incomplete perception of genuine connections.

Analysis can never lead to a complete perception, because the whole is always greater than its parts. Thus, for instance, analytical examinations of old Italian master violins have never been able to unveil the secret of the famous violin makers of Cremona. The whole scientific examination of the old violin making, including the analysis of the famous varnishes, could never lead to new heights of violin making, because it solely undertook the “solve” but not the “coagula.” The quality of the master instruments of Stradivari and Guarneri del Gesù has remained unattainable to this day. I once asked a famous contemporary violin maker, who could literally awaken an old instrument to new life, to tell me the “secret” of the old masters of Cremona. His reply was clear: “There are no secrets in the sense of tricks, as you might think. The ‘secrets’ consist of the true knowledge of natural laws and their bases, which the old masters understood better than we today.”

It is similar with spagyrics. The spagyrist has to “stand in the light of nature,” to quote once more from Paracelsus.

As Nature is extremely subtle and penetrating in her manifestations, she cannot be used without the Art. Indeed, she does not produce anything that is perfect in itself, but man must make it perfect, and this perfecting is called alchemy. . . .

And as medicine must not act without the participation of heaven, it must act together with it. Therefore you must treat it in order to free it from the Earth; and as the latter is not ruled by heaven, it must be removed in the preparation of the medicine. When you have separated the medicine from the Earth, it obeys the will of the stars, that is, it will be guided by them.
--from PARAGRANUM
Manfred M. Junius

Professor Manfred M. Junius (1929-2004) served as the production manager for spagyrics for Australerba Laboratories and was head of the Australian School of Ayurveda in Adelaide, Australia. His Western alchemical knowledge was obtained through many years of personal instruction from Augusto Pincaldi in Switzerland.

“Simply put, this is a classic text on plant alchemy, or spagyrics, for the modern practitioner. . . . Anyone serious about learning alchemy needs to have a copy.”

– Mark Stavish, director of the Institute of Hermetic Studies and author of The Path of Alchemy

"What makes Junius's book so special is that it is a practical primer on the subject. Traditional methods are presented as well as more modernized suggestions, but all within the strict confines of tradition. . . . Highly recommended."

If you've always been curious about the real nature of alchemy, this book will help you in that search. If you are looking for more holistic ways to heal, this book will supply many thought-provoking guidelines. It will be cherished by those already familiar with the subject matter, and represents a bold undertaking by its author."

– Barbara Bamgerger Scott, Curled Up With a Good Book, Oct 2008

"The word means 'to draw out' and 'divide,' a basic principle of alchemy. The techniques date back at least to Paracelsus and have been said to release powerful healing properties from plants."