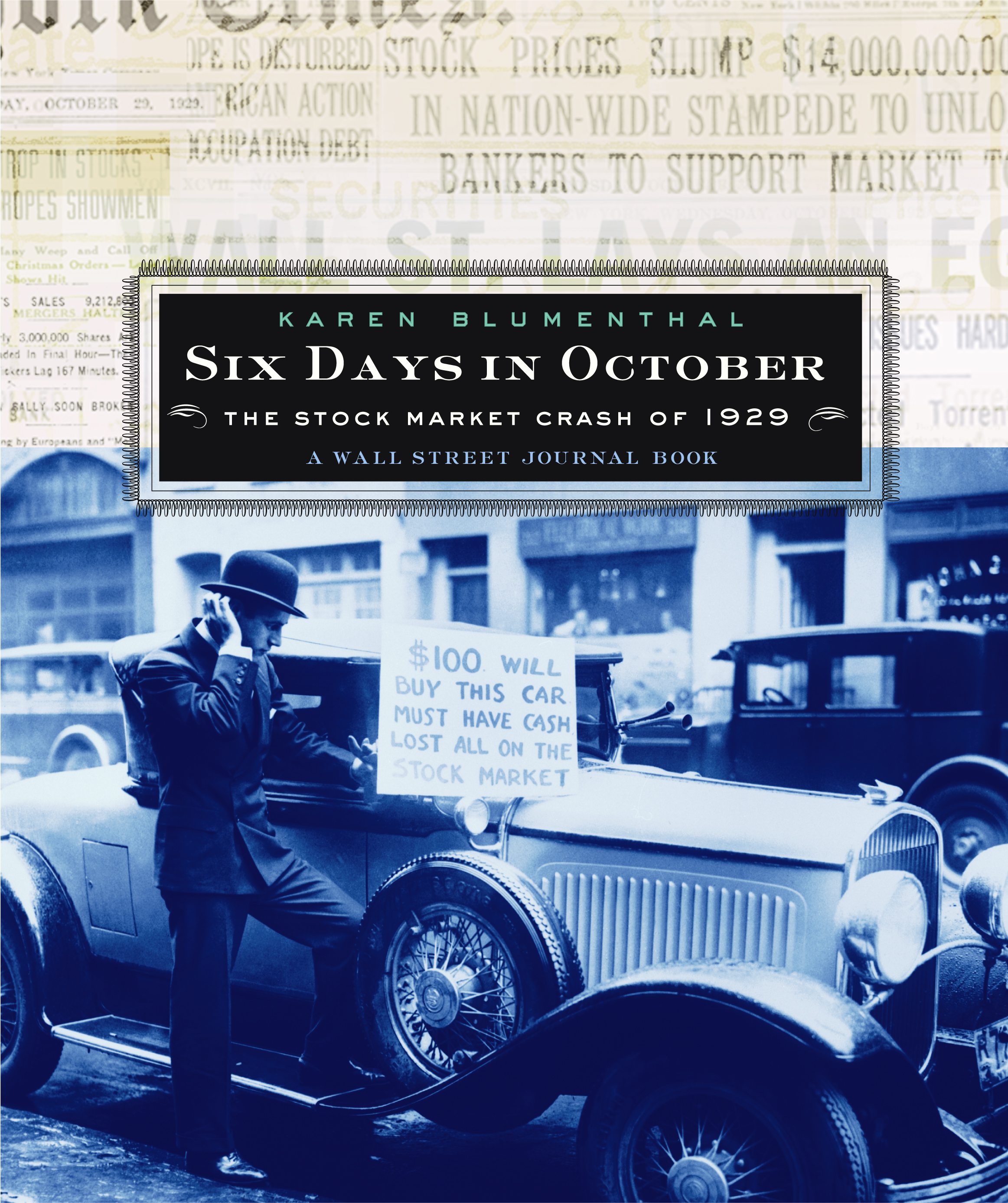 The Stock Market Crash of 1929; A Wall Street Journal Book for Children

By Karen Blumenthal
LIST PRICE $24.99
PRICE MAY VARY BY RETAILER

Over six terrifying, desperate days in October 1929, the fabulous fortune that Americans had built in stocks plunged with a fervor never seen before. At first, the drop seemed like a mistake, a mere glitch in the system. But as the decline gathered steam, so did the destruction. Over twenty-five billion dollars in individual wealth was lost, vanished gone. People watched their dreams fade before their very eyes. Investing in the stock market would never be the same.
Here, Wall Street Journal bureau chief Karen Blumenthal chronicles the six-day period that brought the country to its knees, from fascinating tales of key stock-market players, like Michael J. Meehan, an immigrant who started his career hustling cigars outside theaters and helped convince thousands to gamble their hard-earned money as never before, to riveting accounts of the power struggles between Wall Street and Washington, to poignant stories from those who lost their savings -- and more -- to the allure of stocks and the power of greed.
For young readers living in an era of stock-market fascination, this engrossing account explains stock-market fundamentals while bringing to life the darkest days of the mammoth crash of 1929.

Word spread quickly on this crisp fall morning: Stocks were in big trouble. The boys selling the morning newspapers shouted the news. Serious-voiced announcers on the radio commented on it. On the street, everyone was talking about it. Something was terribly wrong with the stock market, the greatest fountain of wealth in the history of America.

In the financial district of New York City and in other offices where brokers sold stocks, people began to gather well before stock trading formally began at 10 a.m. Men and women, nervous and pale, rushed to grab seats in the special customers' rooms at brokerage houses all around Wall Street. One observer said they looked like "dying men counting their own last pulse beats."

People also hurried to the corner of Broad and Wall Streets, just across the way from the New York Stock Exchange. Hundreds, then thousands, filled the streets and sidewalks. Men in overcoats and fedoras and women on break from their stenographers' jobs crowded in front of J. P. Morgan & Company, the powerful banking company at 23 Wall Street. They lined the stairs of the Subtreasury Building, right near the statue marking where George Washington was sworn in as the nation's first president. Usually, this kind of massive crowd gathered only for fires or to peer at the gore of some new crime. This day, though, there was nothing to see.

Fear and excitement had brought them, the kind of intense, heart-pounding emotion felt when something really bad is happening. If stocks were dropping, plans for the future were disappearing too. For some people gathered there, every cent they owned was riding on stocks, those odd pieces of paper that represented small stakes in American companies. For others, the stock market's climb had simply been an amazing thing to watch.

In the 1920s many astonishing events had captivated the nation. Charles Lindbergh had successfully flown across the Atlantic, becoming a worldwide hero. Babe Ruth had blasted home runs in record numbers. Bobby Jones had dominated golf. Gangsters had shot and killed hundreds in Chicago. But the dramatic rise of the stock market outlasted and outroared them all. It had been a "magic carpet ride" that now seemed to be ending in a most spectacular way. As people gathered, they waited for details with a mixture of thrill and dread.

Motion-picture cameramen arrived to film the scene for the newsreels that ran in theaters before feature films. Hundreds of additional police, some on foot and some on horseback, were sent to keep the crowd moving. But this group was orderly; in fact, it was eerily somber, almost dazed by the mysterious events going on across the street.

For more than a year, the stock market had been the surest and easiest way in the world to get rich. A ditty in The Saturday Evening Post captured the attitude:

Daddy's gone to play with the bulls and the bears,

Mother's buying on tips and she simply can't lose,

And baby shall have some expensive new shoes."

Companies had sold hundreds of thousands of shares to the public to raise money to build new plants or to expand their businesses. Once the companies sold them, those shares were traded between buyers and sellers in places like the New York Stock Exchange. People invested in these stocks hoping the companies would do well. Well-managed companies that make popular products usually see their sales and profits -- and stock prices -- grow. Sometimes, though, investors buy stocks for emotional reasons. They like the name, or the idea, or even an advertisement for a company. That kind of excitement can take on a life of its own, sending a stock soaring or crashing for no rational reason.

People who had bought a piece of General Electric, Montgomery Ward, or Westinghouse in March 1928 had witnessed a buying frenzy as those shares had at least doubled in value in eighteen short months. Which stocks were hot and who had been lucky had been trolley-car chitchat, party talk, and dinner-table conversation for months. Defying gravity and common sense, dozens of stocks had jumped from $20 or $30 to $200 or $300 a share. What was to keep them from going to $400 or higher?

Hardly anything seemed capable of slowing the climb. But on a brutally hot and humid day in early September 1929, prices had started slipping and sliding. Such "breaks" in the market weren't that unusual -- in fact, stocks had dropped sharply the previous December and again in March. The smart players saw those declines as an opportunity. In the past few years, every fall had been followed by a recovery. Each time, stock prices climbed even higher than before.

At first, the shift that started in September seemed healthy, a natural cooling off of an overheated market. But in October there had been some ugly days when stock sales were too heavy. The market seemed less sure. Still, the problems didn't appear to be too serious.

Then, in the last hour of trading on Wednesday, October 23, stock prices seemed to melt. Out of nowhere, everyone seemed to want to sell at the same time. Some stocks dropped a shocking $5 or $15 a share in frantic trading because no one would step up to buy them. More than 2.6 million shares changed hands in the chaotic final hour of trading, as many as might trade in a regular day. When the gong that ended trading rang at 3 p.m., the market was weak and trembling.

On the morning of October 24, the virus seemed to have spread. People were selling shares at any price they could get, and prices were plunging with a violence never seen before. "In a society built largely on confidence, with real wealth expressed more or less inaccurately by pieces of paper, the entire fabric of economic stability threatened to come toppling down," the New York World reported somberly.

All over Wall Street, there were rumors. Half a dozen brokers working inside the Stock Exchange had collapsed and were taken to hospitals, it was whispered. Eleven well-known speculators had already killed themselves. Men, broken and broke, were jumping from buildings! The crowd craned their necks to look up at windows. Ambulances rushed to respond.

One person spotted a man atop a high building looking down at them, and assumed the man was about to jump. The crowd bunched together to watch. But the man turned out to be making some repairs, and when he went back inside, the throng was disappointed. A London newspaper reported that so many distraught stock owners jumped from windows that bodies were littering the streets of Manhattan. Not so. In truth, there were no suicides on Wall Street that day, though many people may have felt as if their world were ending.

There was, though, an ominous feeling, a deep-in-the-gut sensation that something powerful and painful was unfolding. From across the street at the Stock Exchange came a weird and relentless roar that could be heard clearly by the crowd. Steady and high-pitched, it was the combined voices of more than a thousand men inside trying to hold on to the last shreds of the greatest financial boom ever. "It was the voice of the Street," said The New York Times, "now hopeful, now tragic, making audible the history of a momentous day in the market." 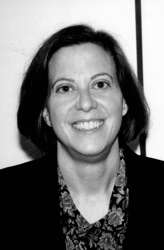 Karen Blumenthal is the author of Let Me Play: The Story of Title IX: The Law That Changed the Future of Girls in America; and Six Days in October: The Stock Market Crash of 1929, a 2003 Sibert Honor Book. A veteran Wall Street Journal editor and reporter and a die-hard sports fan, she lives with her husband and two daughters in Dallas, Texas.

The Stock Market Crash of 1929; A Wall Street Journal Book for Children

By Karen Blumenthal
LIST PRICE $24.99
PRICE MAY VARY BY RETAILER