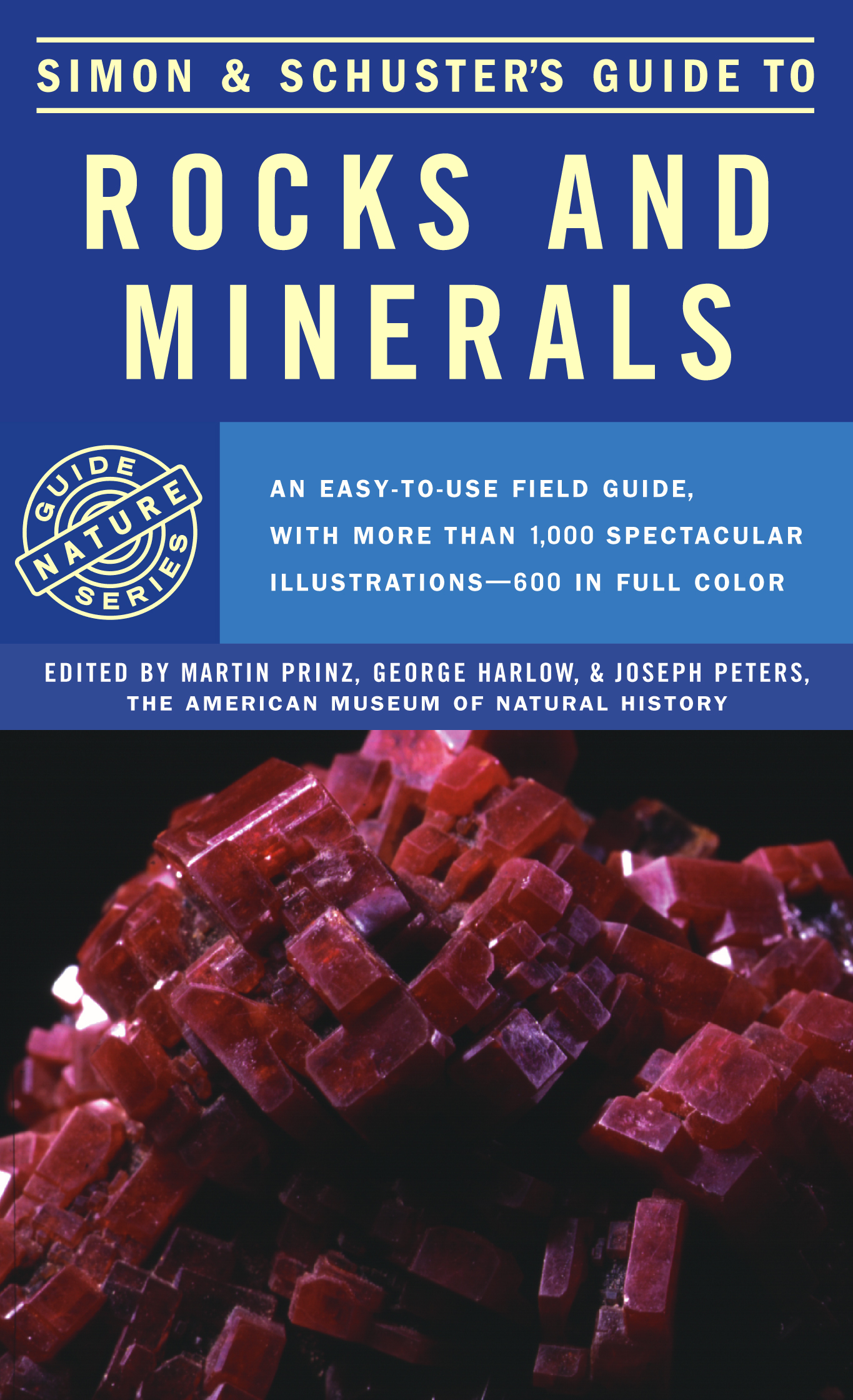 By Simon & Schuster
LIST PRICE $22.00
PRICE MAY VARY BY RETAILER

An easy to use field guide that contains everything rock and mineral enthusiasts need to know with more than 1,000 spectacular illustrations—600 in full color!

Practical, concise, and easy to use, Simon & Schuster’s Guide to Rocks and Minerals contains everything that the rock and mineral enthusiast needs to know. This field guide is divided into two large sections—one devoted to minerals and one to rocks, each prefaced by a comprehensive introduction that discusses formation, chemistry, and more. All 377 entries, beautifully illustrated with color photographs and helpful visual symbols, provide descriptions and practical information about appearance, classification, rarity, crystal formation, mode of occurrence, gravity of mineral, rock chemistry, modal classification fields, formational environments, grain sizes of rocks, and much more.

Whether you are a serious collector or an information-seeking amateur, this incomparably beautiful, authoritative guide will prove an invaluable reference.

Appearance Tetrahexahedral or octahedral crystals, Usually twinned, rare. Generally occurs in compact masses, sometimes of considerable size, or in dendritic and filiform masses. Characteristic copper-red color on fresh surfaces, more often with a greenish film of malachite or a blackish or iridescent film. Sometimes occurs as a pseudomorph after calcite, aragonite or cuprite.

Environment A typical mineral formed by chemical processes in reducing conditions in the oxidation zone of sulfide deposits. Also occurs in cavities of basalts and conglomerates, sometimes in considerable quantities. Often found in old mines subject to periodic flooding by water containing copper sulfates, appearing as crusts on iron objects or replacing fibers of wooden supports.

Occurrence The finest crystals of native copper, measuring up to 3 cm (1.18 in), come from the Keweenaw Peninsula (Lake Superior, USA) where masses weighing up to 400 metric tons and natural alloys of copper and silver known as "halfbreeds" have also been found. There are other deposits with fine crystals of native copper in Germany, and Bisbee, Arizona (USA) and in the manganese skarns of Långban (Sweden) and Franklin, New Jersey (USA). Dendrites and masses are very common in many deposits (USSR, Zambia, Chile). In Europe, small deposits are found near Pisa and Florence (Italy).

Uses Native copper rarely occurs in large enough quantities to be worth exploiting commercially. The metal has been important in human history, second only to iron. Nowadays its chief use is in electrical engineering (electric cables and wires) and for alloys (brass, bronze and a new alloy with 3 percent beryllium which is particularly vibration resistant).

Occurrence The finest dendritic and wirelike crystals come from Köngsberg (Norway). Other famous localities are Freiberg (DDR) and San Luis Potosi (Mexico). Large amounts of silver, though not fine crystals, are found at Chanarcillo (Chile), Cobalt, Ontario (Canada), Broken Hill (Australia) and Redbeds, Colorado (USA). The largest blocks are from Aspen, Colorado (USA), where one weighing 380 kg (844 lb) was mined. However, the highest level of production has been from the Guanajuato mine (Mexico), about 500 billion kilos (460,000,000 tons) from the year 1500 to the present day. Found in southern Europe on the island of Sardinia.

Uses An excellent ore of the metal silver, but rare. Silver is used in photography, chemistry, jewelry and in electronics because of its very high conductivity. In the USA and some other countries it is still used as currency, generally in some form of alloy.

Physical properties Fairly soft (2.5-3), very heavy, ductile and malleable Opaque with bright metallic luster Very thin sheets let through feeble, greenish light. Medium fusion point (1061°C; 1942°F) An excellent conductor of heat and electricity. Its insolubility in acids (except aqua regia) and its specific gravity distinguish it from yellow sulfides and from the small altered plates of biotite often found in sands, where it is associated with pyrite arsenopyrite and pyrrhotite and with tellurides and selenides of gold. Also occurs in various volcanic rocks and tuffs, associated with chalcedony and manganese minerals Large concentrations known as bonanzas are formed by the erosion and redeposition of gold-bearing lavas.

Environment Occurs primarily in high-temperature hydrothermal quartz veins in extrusive rocks Frequently found as a natural alloy with silver (electrum) and less often with palladium (porpezite) and rhodium (rhodite). However, most gold is obtained from concentrations of sedimentary origin (placers). both recent (river sand) and fossil deposits (conglomerate matrix), where it is accompanied by other heavy minerals Gold flakes are also found in the cementation zones of sulfide, selenide and telluride deposits, formed at high temperature under hydrothermal conditions

Occurrence The mare gold-bearing districts are the Witwatersrand (South Africa), the Mother Lode (California, USA). the Yukon (Alaska, USA), Porcupine (Northwest Territory, Canada) and the USSR. Formerly mined in a small district near Monte Rosa (Italy). The mare source of the commercial metal, used mainly as a monetary standard, in jewelry, in dentistry and for scientific and electronic instruments.

By Simon & Schuster
LIST PRICE $22.00
PRICE MAY VARY BY RETAILER