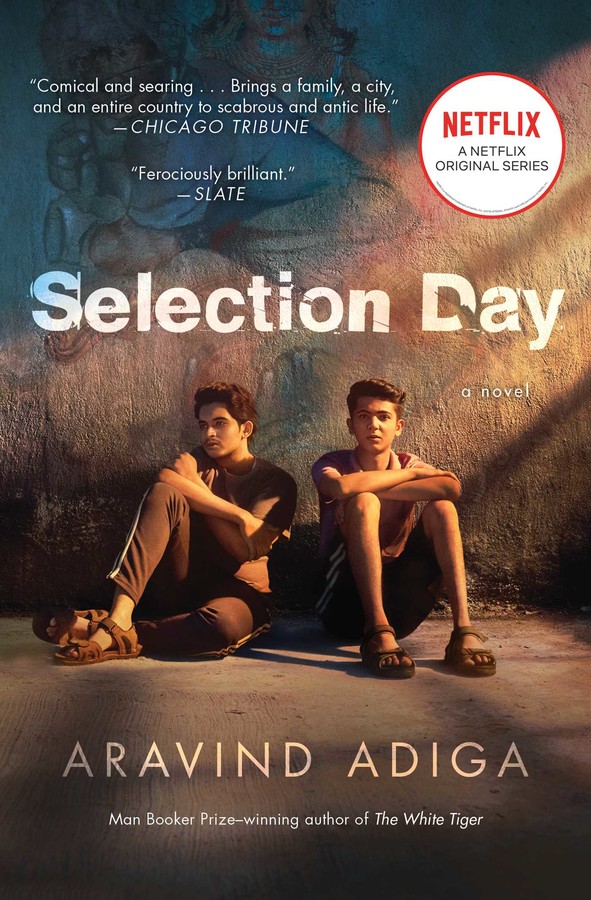 By Aravind Adiga
LIST PRICE $12.99
PRICE MAY VARY BY RETAILER

From the bestselling, Booker Prize-winning author of The White Tiger and Amnesty, a “ferociously brilliant” (Slate) novel about two brothers coming of age in a Mumbai slum, raised by their crazy, obsessive father to be cricket champions.

Manjunath Kumar is fourteen and living in a slum in Mumbai. He knows he is good at cricket—if not as good as his older brother, Radha. He knows that he fears and resents his domineering and cricket-obsessed father, admires his brilliantly talented sibling, and is fascinated by curious scientific facts and the world of CSI. But there are many things, about himself and about the world, that he doesn’t know. Sometimes it even seems as though everyone has a clear idea of who Manju should be, except Manju himself. When Manju meets Radha’s great rival, a mysterious Muslim boy privileged and confident in all the ways Manju is not, everything in Manju’s world begins to change, and he is faced by decisions that will challenge his sense of self and of the world around him.

By clicking 'Sign me up' I acknowledge that I have read and agree to the privacy policy and terms of use. Free ebook offer available to NEW US subscribers only. Offer redeemable at Simon & Schuster's ebook fulfillment partner. Must redeem within 90 days. See full terms and conditions and this month's choices.
This reading group guide for Selection Day includes an introduction, discussion questions, and ideas for enhancing your book club. The suggested questions are intended to help your reading group find new and interesting angles and topics for your discussion. We hope that these ideas will enrich your conversation and increase your enjoyment of the book.

From Aravind Adiga, the bestselling, Booker Prize–winning author of The White Tiger, comes a dazzling new novel about two brothers in a Mumbai slum who are raised by their obsessive father to become cricket stars, and whose coming of age threatens their relationship, future, and sense of themselves.

1. Selection Day opens with a young Manju thinking about the darkness of kattale, secrets, and his mother (p. 1). On page 23 Manju describes his “secret gift, this mind-reading power, [that] had come to him from his mother.” How do Manju’s secrets and his and Radha’s mysterious, absent mother set the stage for the novel?

2. Mohan tells his boys that “if you really want to understand the life that waits for you as adults, this is the only proverb you need: ‘Big thief walks free. Small thief gets caught’” (p. 29). What does this mean and why is this a key proverb for Mohan? How does this saying play out in the rest of the story?

3. “All batting—all good batting—starts with superstition” (p. 73). How do superstitions affect each of the Kumars, on and off the cricket pitch?

4. Both Mohan and Tommy Sir have a deep distrust of the male body, and they believe cricket helps boys to master it and ignore filthy urges. Why are they so suspicious of the boys and their natural instincts? How does cricket factor in?

5. Tommy Sir, whose one great ambition is to find the ultimate cricket player, also believes that “only failure—the right kind of failure—has tragic grandeur,” and failure excites and arouses him (p. 141). What does this reveal about Tommy Sir and his pursuits?

6. After Radha begins to falter at bat, he rails against the sea. “Someone up there was rewriting the promised contract, and Radha Kumar, who could do nothing to undo the changes to the script, who had learned—as his father had—what it meant to be only a man before he had learned what it meant to be fully a man, bludgeoned the waves around him” (p. 182). What is the difference between “only a man” and “fully a man”? How does this difference characterize both Radha and Mohan?

7. On page 185, Manju says Javed is his “real father.” What does he mean by that? What would Javed think of that statement?

8. Sofia influences both Radha and Manju’s lives. When she picks Manju up in her car to talk to him about the rumors that he’s gay, in the background is Durga Puja, the festival of the Mother Goddess (p. 199). Is Sofia a mother figure in the novel? A goddess? What roles does she play?

9. Tommy Sir comes to believe that “a great sportsman is a kind of monster” and that Manju’s hatred—for his father, for Tommy Sir, for cricket itself—makes him a great batsman (p. 224). What does this hatred change for Manju as an athlete, as a man? How does hatred fuel other characters in Selection Day?

10. After Manju talks with Javed’s father, he sees that Javed’s many personalities, built up and then discarded, are a reaction to his father’s manipulations (p. 245). Why does Javed create these personas and destroy himself in this way to get back at others?

11. “Out there, Manju thought, with regret—a regret he would feel so keenly for the rest of his life—there must be fellows who are actually proud of their fathers” (p. 246). Why is this such a painful realization for Manju? Does this play into his decision not to be a father himself (p. 284)?

12. In Hindu mythology the world is thought to rest on the backs of four elephants who stand on the shell of a turtle. Elephants are often masculine symbols, while turtles are feminine. Turtles appear throughout the novel—Manju and Radha observe them near their home in the slum, Radha imagines a turtle speaking to him in his dreams, and Manju imagines seeing turtles that become Mohan, Radha, and Tommy Sir, as he gazes into Javed’s batting helmet (p. 261). What do turtles signify for Manju? For Radha? Why are they important?

13. Why does Manju ultimately reject Javed (p. 262), and with the words “you homo” that he and his brother had previously taunted Javed with?

14. Selection Day ends with Radha and Manju meeting for Manju’s birthday, and Radha finally pinching Manju until he agrees to fight “till one of us falls” (p. 297). How does this closing scene reflect the novel as a whole?

1. In honor of benefactor Anand Mehta, have Indian and Australian food and drinks with your group as you discuss the book. Vegemite, samosas, Fosters, biryani—use your imagination for a meal your book club won’t forget.

2. Research Sachin Tendulkar, the “god of cricket,” who once made a pilgrimage to Kukke Subramanya temple to worship and improve his career. What else is there in the famous cricket star’s life that might have influenced Selection Day?

3. For more of Aravind Adiga’s insightful fiction and characters who navigate modern Indian society and the caste system, read The White Tiger as well and discuss how the two novels intersect and diverge.

By Aravind Adiga
LIST PRICE $12.99
PRICE MAY VARY BY RETAILER