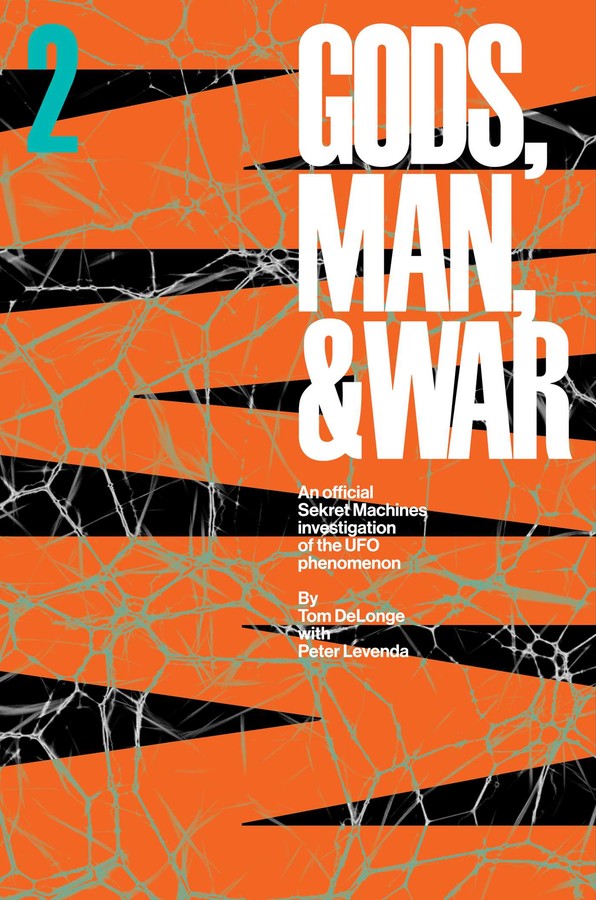 Part of Sekret Machines
By Tom DeLonge and Peter Levenda
Published by To The Stars
Distributed by Simon & Schuster
LIST PRICE $27.99
PRICE MAY VARY BY RETAILER

The stunning continuation of an intensive study of UFO phenomena in which the hard science, technology, and the human mind are explored as they relate to our world and the encounters that people are still having today…

In Sekret Machines: Gods, the cultural, historical, and religious aspects of mankind’s encounters with UFO’s was explained by Open Mind's 2017 UFO Researcher of the Year and To The Stars Academy of Arts and Science founder Tom DeLonge with renowned research author Peter Levenda.

Here, they continue their revelatory work in a thoroughly-researched expose that seeks to solve the scientific mysteries of the the unidentified aerial phenomenon, the UFO experiencers whose lives were changed forever, and what it means for all mankind. To this end, they have divided their study into three fields of inquiry:

Genetics and the ET Hypothesis: Was life on Earth actually initiated by alien life forms deliberately? Many cultures worldwide hold clues in their mythos that points to this. But for what ultimate purpose would this have? And what does that make humanity?

Consciousness: If the building blocks of life were truly transplanted by a higher intelligence with intent, was our human concept of consciousness included in that DNA? And as we evolve, are we headed toward eventual immortality as sentient beings?

Human-Machine Symbiosis: In this section, the concept of technological advancement is explored—focusing on our own astounding achievements in recent years in the fields of Artificial Intelligence and robotics—which leads to a much deeper question: If we have come so far so fast, what unfathomable level of technology must the phenomenon already possess?

In Sekret Machines: Man, DeLonge and Levenda go beyond the lies fed to the public for decades—using unsealed confidential records, expert analysis, and eyewitness testimony from scientists, civilians, military personnel, researchers, and UFO experiencers to reveal the wide-ranging influence that UFO forces have had upon our past, continue to exert on our present, and may hold for our future.

Tom DeLonge is an award-winning producer, author, platinum recording artist, researcher and entrepreneur from San Diego, CA.  Today Tom, with his company To The Stars, produces original content that aims to inspire a newfound appreciation of the profound, yet unresolved, mysteries involving science and the universe through entertainment directly informed by science.  His first multi-media franchise Love, told the story of an isolated astronaut on the International Space Station and included a double album by his band Angels And Airwaves with the feature film premiering in 600 theatres across the United States.  His next franchise Poet Anderson was inspired by a dream study conducted at Stanford University and spanned an award-winning short film, a chart-topping album, acclaimed comic book series, graphic novel and a YA science fiction novel co-written with NY Times Bestselling author Suzanne Young.  Most recently he is working on Sekret Machines which spans both sci-fi fiction and nonfiction thesis informed by unprecedented access at the highest level of the government and science to uncover information about the UFO phenomenon with renowned authors AJ Hartley and Peter Levenda.  His Sekret Machines work has won him the 2017 UFO Researcher of the Year award.

Peter Levenda is a native of the Bronx, New York but has lived or traveled all over the United States and the world in the course of his life, work and research. As an executive with an American telecommunications manufacturer he was based in Kuala Lumpur, Malaysia for more than seven years. Before that he was one of the first Americans to do business (successfully) in China. He has an MA in Religious Studies and Asian Studies from FIU, and speaks a variety of languages (some of them dead). He was briefly detained at the notorious Nazi sanctuary and interrogation center Colonia Dignidad in Chile, in 1979 during the course of research for Unholy Alliance. He has appeared in numerous television programs for the History Channel, the Discovery Channel, National Geographic, and TNT as an expert on Nazi Germany and especially on the extreme religious and esoteric ideas that formed the Nazi worldview. He has interviewed Nazis, neo-Nazis, Klansmen, occultists, CIA officers, and Islamic terrorists in the course of his research and has visited Chinese prisons and military bases; Buddhist temples; Muslim boarding schools in Indonesia; Russian Orthodox monasteries; mosques in Europe, the United States and Asia; the Palestine Liberation Organization; several voodoo hounforts; the former KGB headquarters (Dzherzinsky Square) in Moscow; has been held at gunpoint in Latin America, and celebrated with a state dinner in Beijing. At the age of seventeen he gate-crashed the funeral for assassinated Senator Robert F. Kennedy at St. Patrick's Cathedral in New York City, and led the procession out of the cathedral. (He graduated high school later that month.) He was a member of the same front organization -- a renegade Ukrainian church in the Bronx -- that provided cover for David Ferrie and Jack Martin (suspected co-conspirators in the JFK assassination). In addition, he was an auxiliary police officer for the New York Police Department. His published work has been praised by Norman Mailer, Jim Hougan, Dick Russell, Whitley Strieber, Katherine Neville, and many others. He is or was a member of MENSA, of the American Academy of Religion, of the Association of Former Intelligence Officers, of the Norman Mailer Society, and the T. E. Lawrence Society.

Part of Sekret Machines
By Tom DeLonge and Peter Levenda
Published by To The Stars
Distributed by Simon & Schuster
LIST PRICE $27.99
PRICE MAY VARY BY RETAILER