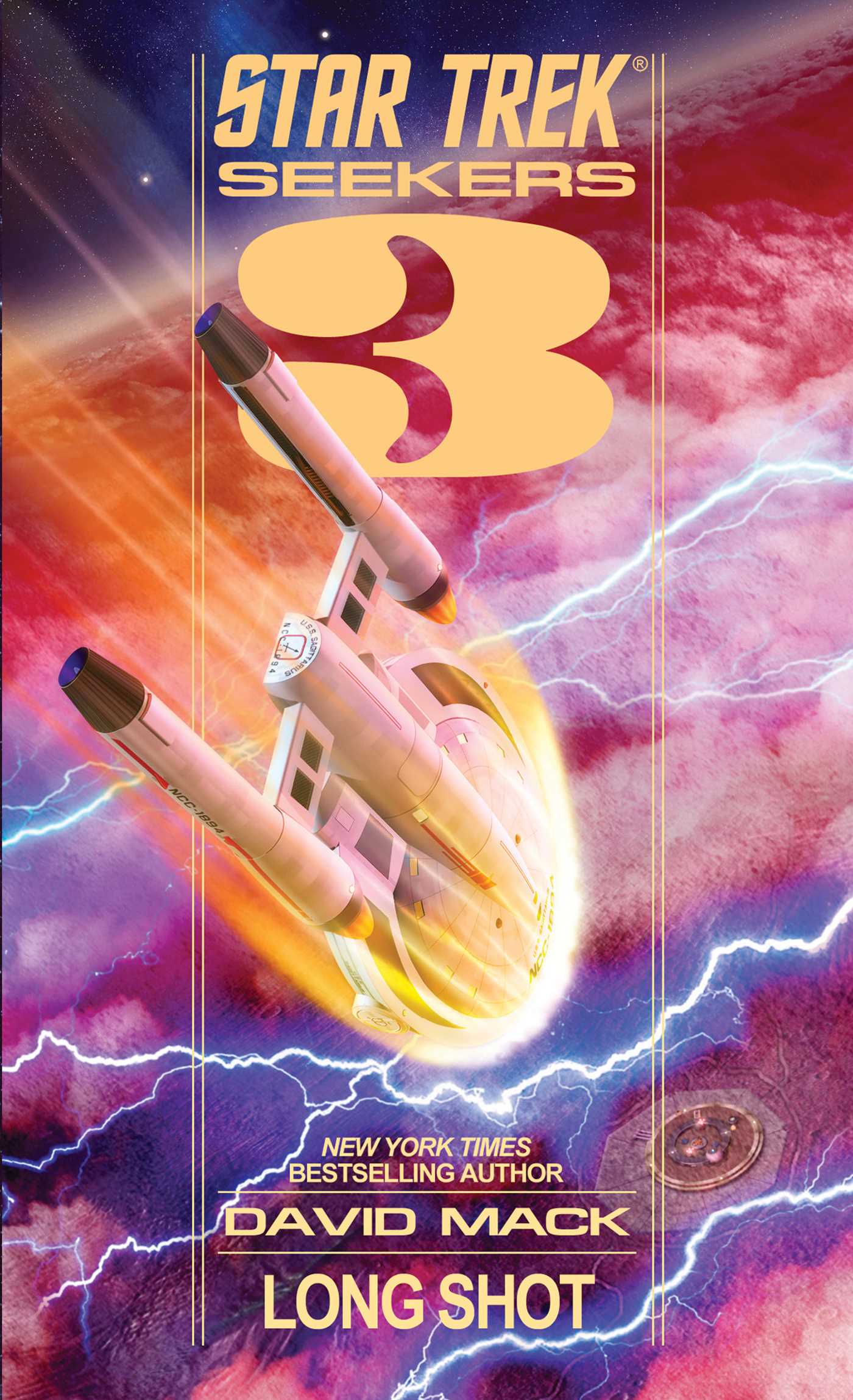 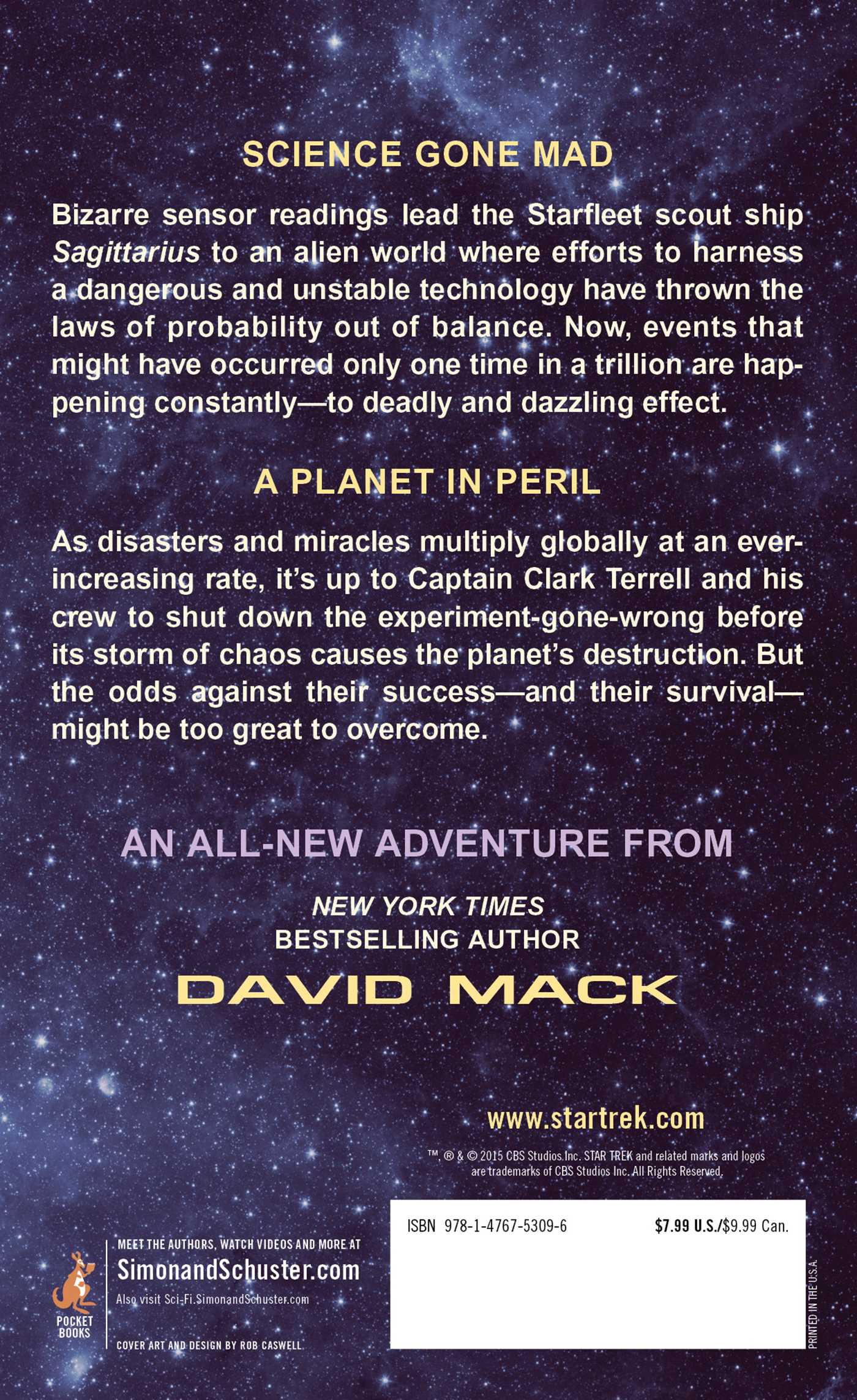 SCIENCE GONE MAD…Bizarre sensor readings lead the Starfleet scout ship Sagittarius to an alien world where efforts to harness a dangerous and unstable technology have thrown the laws of probability out of balance. Now, events that might have occurred only one time in a trillion are hap­pening constantly—to deadly and dazzling effect.

A PLANET IN PERIL…As disasters and miracles multiply globally at an ever-increasing rate, it’s up to Captain Clark Terrell and his crew to shut down the experiment-gone-wrong before its storm of chaos causes the planet’s destruction. But the odds against their success—and their survival—might be too great to overcome.

The universe was about to give up one of its most closely held secrets, and Doctor Pren Kavalas swore by his cranial fins he wouldn’t miss a moment of this historic breakthrough. He kept his left eye on the bank of status gauges for the quantum variance field, his middle eye on the monitors for the remotely located quantum fluctuation generator, and his right eye on his colleagues, to make sure they were giving this moment as much of their attention as he was. He had labored too long to leave even the smallest details to chance. Not when he was so close.

For their parts, Doctor Nobixu Guentheri and Professor Zehgos Poal seemed as engrossed in their assigned tasks as Kavalas was in his. Like Kavalas, Guentheri was a specialist in dark energy research, though her achievements in the field to that point had been more theoretical than practical. Her insights had been vital to the conception of the QFG, even if she had proved less than instrumental in the hands-on aspects of the project. That, after all, was why they had enlisted the aid of the renowned Professor Poal. Unlike many members of academia, he excelled at putting ideas into action and extracting concrete results from fanciful inventions.

Tonight, the three of them would rewrite the rules of science.

Kavalas tried to affect a neutral tone, but despite his efforts, his voice trembled with excitement. “Doctor Guentheri? Are the flux levels within the expected range?”

“So far.” She adjusted the settings on her console. “But the amplitude is increasing.”

Troubled by her report, Kavalas checked his master gauges. Just as Guentheri had said, the highs and lows of the quantum field fluctuations were becoming more pronounced.

“Professor, reduce the power to the QFG. We need to stabilize the variance field.”

“Reducing power.” Poal worked quickly. His hands’ slender digits were stiff, slow, and wrinkled, robbed of their supple grace by time’s relentless march but still capable of coaxing precision results from all manner of machines. He stopped and looked at Kavalas. “The system isn’t responding. Power output from the QFG is continuing to increase.”

Not a malfunction, not now. Like most Austarans, Pren Kavalas wasn’t superstitious; he took pride in his rationality, his logic, and his intellect. But fear drove him to pray to the mythical Sea Mother his people had worshiped eons ago. Please, not now.

Setbacks were a part of science. He knew that. But he and his partners were in a race to set the future for their people. Their rivals at the Gemakis Foundation were working on a system for magnetically harnessing the energy released from the mutual annihilation of deuterium and antideuterium. It had shown promise, though Kavalas had been vocal in his criticism of its need for a constant supply of antimatter, a limitation that called into question its practicality as a power source. By contrast, his research into dark energy had suggested the possibility of tapping into an effectively unlimited, ubiquitous supply of free cosmic power. If he could make the quantum fluctuation generator work, not only would it revolutionize the mass production of energy for everyone on Anura, it would transform the Austarans into a starfaring civilization in less than decade. After that, the entire galaxy would be open to them.

Assuming he and his collaborators could rein in their runaway generator.

If everything worked as designed, the sudden loss of main power would leave only a residual quantum variance field around the QFG, and a quick pulse from the disruptor coils would disperse the effect and restore the system to its neutral state. Kavalas watched the digital readouts on the master console stutter with gibberish and machine-language symbols for a few seconds. When the displays stabilized, the story they told was not one he wanted to see.

“Why is the variance field still intact?”

His peers pressed in close to his back and watched over his shoulders, their jaws agape, as the data on his screens trended in the wrong direction. The professor pointed at the gauges. “The bigger question is: Why is it increasing?”

It shouldn’t have been possible, but Kavalas watched it happen. The quantum fluctuation generator was cut off from its power inputs, and its output was being blocked by the coils—yet the quantum variance field was increasing in strength and size, as if neither precaution had been put into effect. In defiance of the system’s safeguards and all the known laws of physics, the generator had become not just self-sustaining but self-expanding.

A warbling croak of horror resonated inside Guentheri’s delicate vocal sac, which trembled beneath her tapered jaw. “I was afraid of this, Pren. The threshold for critical stability in the quantum membrane must have been lower than we calculated.”

Kavalas clutched anxiously at the pale silver fabric of his work tunic. “That can’t be right, Nobi. We ran all those simulations, checked all the equations—”

“There were always variables we couldn’t guarantee,” she cut in. “I told you that.”

Dread and regret mingled in Kavalas’s stomach. “Nobi, please tell me we’re not looking at a worst-case scenario.”

She rolled her narrow shoulders. “We won’t know until . . .” Her voice trailed off as her three eyes bulged in alarm. Kavalas and Poal pivoted toward the master control panel. All its readouts had gone dark. Fear took hold of Kavalas as he leapt to the console and started keying commands into every interface, in the hope that one of them would respond.

Poal was nervous as he sidled up to him. “We lost contact with the QFG, didn’t we?”

“Yes.” Kavalas ceased his efforts. With both hands flat on his console, he hunched forward in exhaustion. After taking a moment to compose himself, he straightened and pulled his personal comm from a pocket on the inside of his tunic. “Keep trying to shut it down, any way you can.” He tapped commands into his comm’s touchscreen. “I need to call the tribune and tell her we might have just unleashed a global catastrophe that will kill us all.”