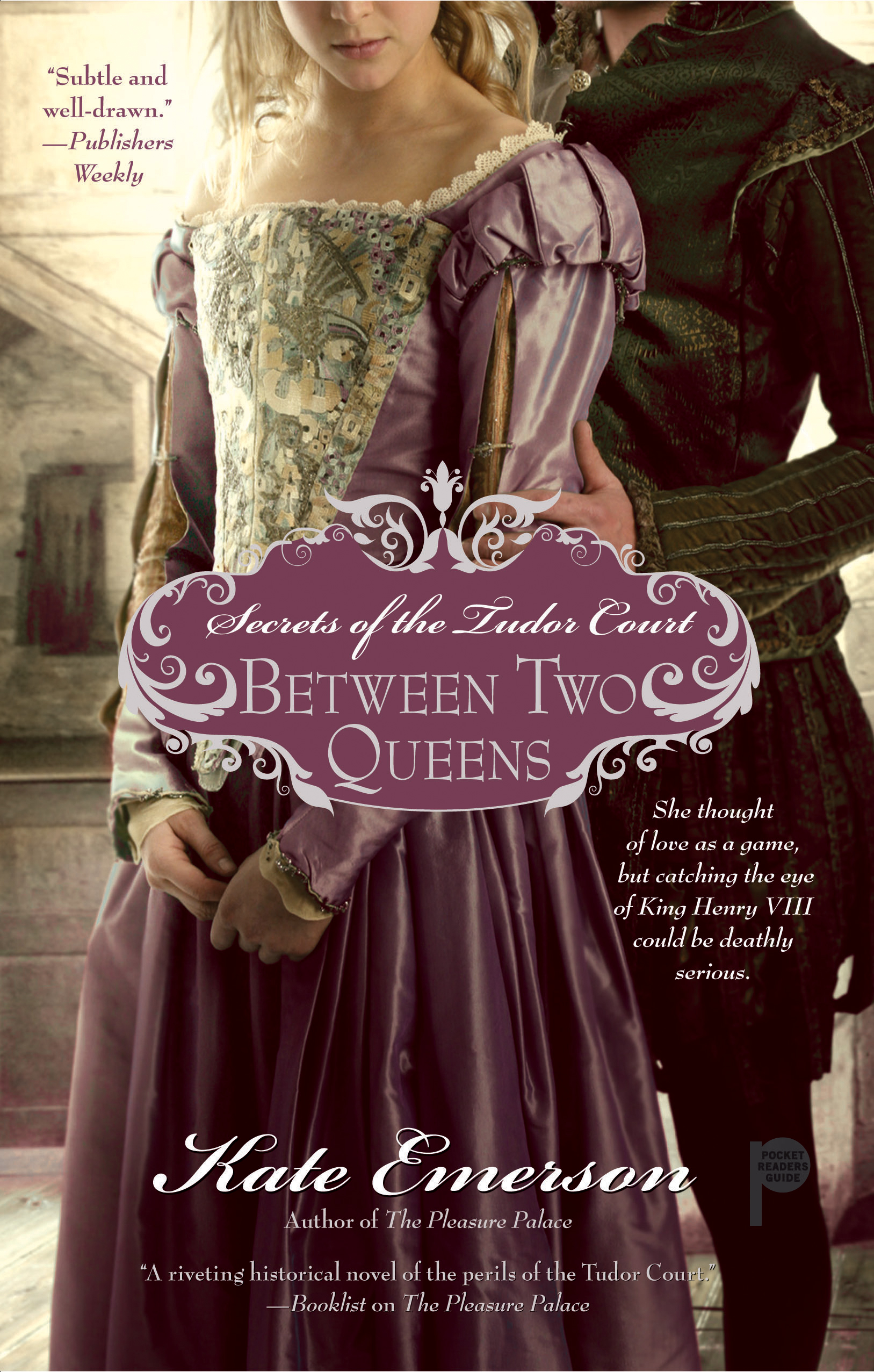 Secrets of the Tudor Court: Between Two Queens

Part of Secrets of the Tudor Court
By Kate Emerson
LIST PRICE $23.99
PRICE MAY VARY BY RETAILER

THE SECRETS OF THE TUDOR COURT SERIES IS
"RICH AND LUSHLY DETAILED, TEEMING WITH PASSION
AND INTRIGUE," SAID ROMANTIC TIMES. NOW TALENTED
KATE EMERSON CONTINUES A SAGA AS DRAMATIC
AND SEDUCTIVE AS THE COURT ITSELF.

Pretty, flirtatious, and ambitious. Nan Bassett hopes that an appointment at the court of King Henry VIII will bring her a grand marriage. But soon after she becomes a maid of honor to Queen Jane, the queen dies in childbirth. As the court plunges into mourning, Nan sets her sights on the greatest match in the land...for the king has noticed her. After all, it wouldn't be the first time King Henry has chosen to wed a maid of honor. And in newly Protestant England, where plots to restore the old religion abound, Nan may be the only one who can reassure a suspicious king of her family's loyalty. But the favor of a king can be dangerous and chancy, not just for Nan, but for her family as well...and passionate Nan is guarding a secret, one that could put her future -- and her life -- in grave jeopardy should anyone discover the truth.

Based on the life of the real Anne Bassett and her family, and drawing extensively from letters and diaries of the time, Between Two Queens is an enthralling picture of the dangers and delights of England's most passionate era.

By clicking 'Sign me up' I acknowledge that I have read and agree to the privacy policy and terms of use. Free ebook offer available to NEW US subscribers only. Offer redeemable at Simon & Schuster's ebook fulfillment partner. Must redeem within 90 days. See full terms and conditions and this month's choices.
A Conversation with Kate Emerson, author of SECRETS OF THE TUDOR COURT: BETWEEN TWO QUEENS

1. When Nan first came to your attention as a historical figure in The Lisle Letters, as mentioned in your Author Note, did you immediately begin to imagine the arc of her story line for this novel? What was your process for developing the fictional version of this woman from the historical references?

The plot of Between Two Queens was inspired by a combination of things. I’ve written a number of historical mysteries and novels of historical romantic suspense, so I’m always on the lookout for a good, real-life conspiracy/spy story. I’ve also written biographies, so the stories of interesting women tend to appeal to me. That said, I didn’t immediately fix on Nan as the protagonist. Her mother is the central character in The Lisle Letters and Nan’s youngest sister Mary is the one with the most romantic story. But Nan, in addition to being at court and having caught the king’s attention in real life, also had more interesting gaps in what is known about her. In developing a fictional character from a real woman, I try to answer all the questions that aren’t answered in the historical record. Was Nan the king’s mistress? Did he really consider marrying her? If so, why didn’t he marry her? What happened in Nan’s life between the events recorded in The Lisle Letters? What secrets might she have that would make her fear marriage to Henry VIII?

2. Are the letters that open each chapter in Between Two Queens real letters that were exchanged between these historical figures? When you set out to write this novel, did you plan from the beginning to include a character Who’s Who?

The letters are all real. I’ve modernized some of the spelling, but otherwise they are just as they were written. As for the Who’s Who, I did plan that from the beginning, since almost all the characters in the novel are real people. There will be a Who’s Who in each of the books in the Secrets of the Tudor Court series.

3. Nan and her sister are in competition with each other in the beginning of the novel. With whom did you find yourself sympathizing more as the novel progressed? Was competition within families for status and reputation a common occurrence in the Tudor Court?

I can’t really say I sympathize with either Nan or Cat, but since Nan is the protagonist, I was always more in tune with her feelings and reactions. Competition within families was indeed common and there were often pairs of sisters at court, vying for the same suitors, if not the same posts.

4. It seems that so many maids of honor became mistresses to Henry VIII. Do you believe that the women who entered court often expected that the position would result in a wealthy marriage or romance with the king, or did they more often go to court with only the intention of serving the queen?

Almost all courtiers, male and female, were at court to advance themselves and/or their families. The maids of honor were unmarried, so they were particularly interested in finding husbands; but there were many more women, most but not all of them married, who made a career of courtiership. They earned wages and were not averse to taking bribes to whisper a word in a royal ear.

Royal bastards were either acknowledged or not. Those acknowledged by their fathers (Lord Lisle; Henry Fitzroy) enjoyed a privileged upbringing. Those who were not, were raised as the children of their mothers’ husbands. Either way, there does not seem to have been any stigma attached.

6. How likely do you think it is that Nan would have been able to rescue Ned from the Tower? Are there historical records that indicate that prisoners were able to escape?

In writing the Tower scenes I studied details of two real escapes, that of Alice Tankerfelde in 1534 and that of William Seymour in 1611. Both were successful, but Alice was later captured because she aroused suspicion by being dressed in men’s clothing.

7. In the description of Anna of Cleves in the Who’s Who at the end of the novel, you state that Hans Holbein the Younger’s portrait of her “makes her appear, to modern eyes, the most attractive of King Henry’s wives” (page 335). Is there evidence to suggest that King Henry truly annulled his marriage to Anna of Cleves because of her lack of beauty? Why would Holbein have misrepresented her in the painting? Based on Holbein’s portraits and what is recorded in history about the appearance of Henry’s other wives, have perceptions of beauty changed since the Tudor era?

All the evidence suggests that Henry had a strong negative physical reaction to Anna of Cleves. He was even willing to state in public that he was impotent with her. Perhaps the chemistry was just wrong between them. And perhaps Holbein was not affected by the same elements. It is true, however, that what constitutes beauty changes from era to era. It is also true that three of Henry’s wives, the three Catherines, were all petite and had fair coloring with red or light brown hair.

8. How did King Henry’s ability to charge his subjects with treason, including those who used to be his closest and most commanding advisors, like Cromwell, affect his rule and life at Court? Was Henry’s power also self-destructive?

Henry VIII became increasingly paranoid and self-destructive as he aged. He was always supremely self-centered and capable of great self-deception. Truthfully, I feel sorry for him.

9. It is suggested in the novel that Anne Boleyn bewitched Henry. Was this a commonly held speculation at the time? How prevalent was the general belief in witchcraft during the Tudor era? Was witchcraft an ability (or curse) attributed only to women?

Almost everyone in the sixteenth century believed in the supernatural, including the miracles of saints as well as the power of witches. Witchcraft, however, was not a civil crime in England until the Elizabethan era. Men could be witches, but women were more likely to be accused.

10. In literature, film, and television, so much attention has been paid to the Tudor Court. Why is this time period in British history so popular among modern audiences? Were there royal kingdoms that existed elsewhere in the world during the Tudor reign that would provide equally entertaining material?

I’m not sure I understand the Tudor craze myself, although I’ve been fascinated by the era since I was a teenager. The court of Francis I of France was every bit as full of scandal and intrigue, but England seems to hold a special place in readers’ hearts.

11. What will the next book in your Secrets of the Tudor Court series be about?

Next up is By Royal Decree, the story of Bess Brooke, another of the three young ladies (along with Nan Bassett and Lucy Somerset) in whom King Henry took an interest at that banquet that followed Catherine Howard’s fall from grace. 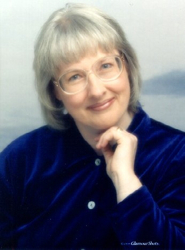 Secrets of the Tudor Court: Between Two Queens

Part of Secrets of the Tudor Court
By Kate Emerson
LIST PRICE $23.99
PRICE MAY VARY BY RETAILER

More books in this series: Secrets of the Tudor Court