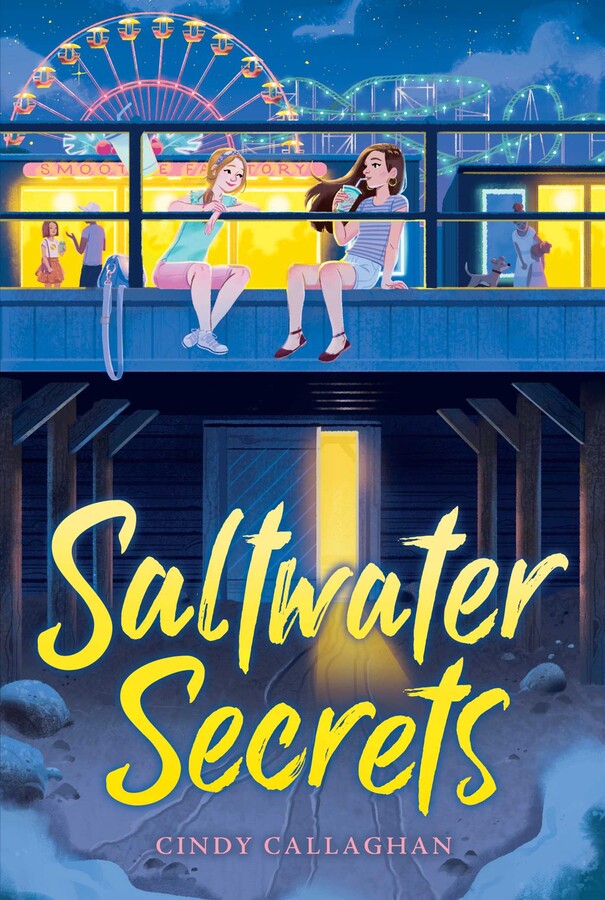 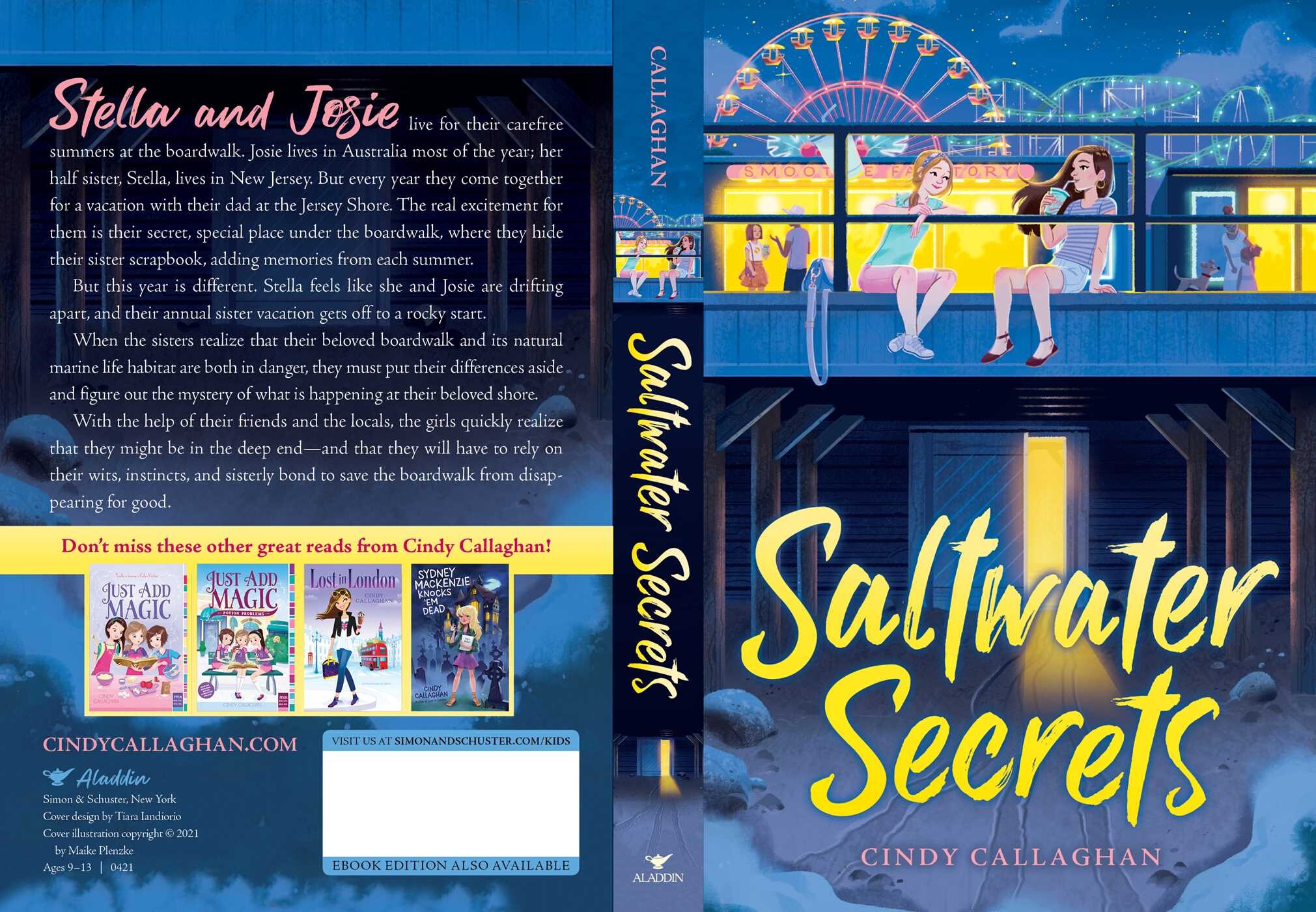 By Cindy Callaghan
LIST PRICE $7.99
PRICE MAY VARY BY RETAILER

From the acclaimed author of Just Add Magic—now a hit streaming original series—comes a sweet novel about two sisters on summer vacation that explores the intricate bonds of a blended family.

Stella and Josie live for their summers at the boardwalk—each one a carbon copy of the last. Josie lives in Australia most of the year; her half-sister, Stella, lives in New Jersey. But every year, they come together for a beach vacation with their dad, and to make more memories. The real excitement for them is their secret special place under the boardwalk, where they hide their sister scrapbook, adding memories from each summer.

But this summer feels different. Josie isn’t the same—she’s turned into one of the popular girls that Stella can’t stand. Despite the rocky start to their vacation, they still go to their secret, special place under the boardwalk, adding memories to their sister scrapbook once again.

That is, until that place is discovered by the owners of the newest store—the Smoothie Factory, which replaced Josie’s favorite sweet spot. Not only have the owners of the Smoothie Factory discovered the cove, they are exploiting the natural habitat, and endangering marine life and everyone at the beach! It’s up to Josie and Stella to figure out how to stop their beloved boardwalk from disappearing for good.

The music on the car radio broke:

“Murielle duPluie here with the Whalehead news from the Jersey Shore. Welcome to the summer. It’s gonna be a hot one today. Stay tuned to WLEO all season for the latest happenings.”

My mom stopped in front of 603 Whalehead Street. “Listen, Stell,” she said. “Stay out of trouble, okay? If you get a third strike… Well, you know.”

She leaned over and kissed me. “Have a great summer. Say hi to Josie for me, and cawl me.” Mom sounds like me—a total New Yorker. “And text me every single solitary day. And send lots of pictures.” She sighed and put her hand on her heart. “Ugh, I miss you already.” She kissed me again and drove away without saying hello to her first husband, my dad, Gary Higley.

I barely got up the gravel driveway before my sister, Josie, ran out of the house.

As soon as I saw Josie, I knew things were going to be different this summer.

That was the problem.

Well, I guess it wasn’t all their fault. Anyway, I couldn’t get in trouble this summer, which wouldn’t be any problem, because I’d be with Josie, and she never did anything bad.

“G’day, Stella!” Josie hugged me and bounced up and down. “Put your stuff away so we can hit the boardwalk. I’m dying for water ice.” With her accent, “ice” sounds like “oyce.” When we were kids, and Josie wasn’t around, I’d imitate her and tell people I was Australian. “I can’t get it at home, you know?”

I hugged her back. “Get outta here. I’m sure they have water ice somewhere—it’s a big country.”

“Oh, it’s not the same,” Josie said, and trailed behind me as she wheeled my suitcase into the house. “Whose shorts are those?”

I looked down at my cutoffs. “They’re mine. You like them?”

She poked at the skin that was just at the frayed hemline of my shorts. “They are definitely… cheeky!”

“It’s supposed to be that way.” I’d worn these shorts a hundred times and never felt self-conscious before, but now I wondered if my butt really did show too much.

Dad met us in the living room. “Stella! Where have you been? We’ve been waiting and waiting.” He smooshed my face into his chest. I saw Dad pretty much every other weekend, except when I had activities in the city that I didn’t want to miss, but he always acted like it’d been forever.

He grabbed Josie, too, and squeezed the three of us together. “My girls!” He let us go so that he could study us. “So grown-up, but you still look like you could be twins.” It was an old joke, because we don’t look anything alike; we’re both clones of our mothers: Josie is blond and blue eyed, and I’m brown hair and eyes and always tan.

I punched his chest. “You’re still working out. Did you show Josie?”

He flexed his arms. “Check out these puppies.” His arms weren’t quite “puppies.” “I’m no-carbing this summer, gonna get ripped.”

“Sounds like a good plan.” I looked at the tackle box by the front door. “Gonna get ripped while you’re fishing?”

“I work out in the morning and fish in the afternoon. At night, I’m gonna try the dating thing. My friend Jay—he’s the one that’s the detective—is setting it up.”

Josie slapped her hands over her ears. “Ugh. I’m not listening to you talk about dating, Dad.”

I actually thought it was a good idea. “Looking for Mrs. Higley number three?”

“Only if she’s looking for me.” He winked and glanced at his watch. “I wish you’d gotten here earlier, Stell. Sorry, but I gotta run. Jay’s waiting at the dock for me. He’s taking me out on his boat, and I’m holding him up.”

“Not just later. A lot. I have big plans for us to do tons of stuff together.” He picked up his tackle box and opened the door. “I’ll make us dinner—prepare yourself for my famous steamed broccoli.”

I caught a look from Josie, and I knew she wanted me to say something. “We might get pizza.”

“Yeah,” Josie agreed. “I’ve been looking forward to it for weeks. I can’t get good pizza in Australia.”

“Okay,” he said. “But after that, we’re starting game one of a Monopoly tournament, so don’t make other plans.”

I was less enthusiastic. I’d hoped to graduate from board games to bonfires on the beach with cute lifeguards and new friends.

Dad grabbed his fishing pole, and, just before shutting the door behind him, he said, “Same deal as always. Text me at nine, twelve, and three o’clock, and be home by six for dinner.”

“Yup,” we said together.

He closed the door.

“What was that about?” Josie asked about the extra “Got it, Stell?”

I shrugged. “Oh, nothing. He worries, you know.”

So, about my dad. He’s been married twice. First to my mom, Montana—they got divorced before she knew she was pregnant with me. As soon as they separated, he met Kate. It was love at first sight. They got married after just a few dates, moved to Australia to be close to Kate’s family, and had Josie, only four months after I was born. Turned out that Gary Higley’s dream of love at first sight fizzled in the outback. Dad returned to New Jersey. Now one daughter (me) lives in New York City with my mom and my stepdad, while his other daughter (Josie) is in Sydney with her mom and her stepdad. The three of us are together for only eight weeks each summer.

I was glad Dad was interested in dating again. He deserved to be happy, but I didn’t love the idea of him getting remarried. I mean, I had to share Mom, and I didn’t want to share him, too.

There was no answer, because she wasn’t there. I looked around. Neither was my suitcase.

She popped her head out of the bedroom we shared. “Putting your stuff in here so summer can begin. You can unpack later, yeah?”

“Sure,” I said. “I just need to look at the ocean to feel like I’m really here.” I walked onto the back porch that overlooked the Atlantic. I loved the smell of salt in the air and the sound of the rolling waves. It was the complete opposite of the concrete and traffic of home.

My dad had inherited this house from his parents and carried on the tradition of spending summers here. It’s perfect that he’s a teacher, so we can come down here.

If not for these weeks at the shore, Josie and I would hardly ever see each other. After all, she lives literally on the other side of the world.

This tradition was so important to both of us that once we got cell phones, we made a pact: Except for moms, we wouldn’t contact our non-summer worlds while we were in Whalehead. It was hard for me not to call Pete, my best friend and crush forever, but I’d done it. This year it wouldn’t be hard at all.

“Ready for water ice?” she asked.

“Have I ever not wanted water ice?” It was our tradition to kick off the summer witha trip to Water Ice World. There was no reason that this year’s trip would be any different.

By Cindy Callaghan
LIST PRICE $7.99
PRICE MAY VARY BY RETAILER